Lake Placid: An adventure in the hills discovering new limits. 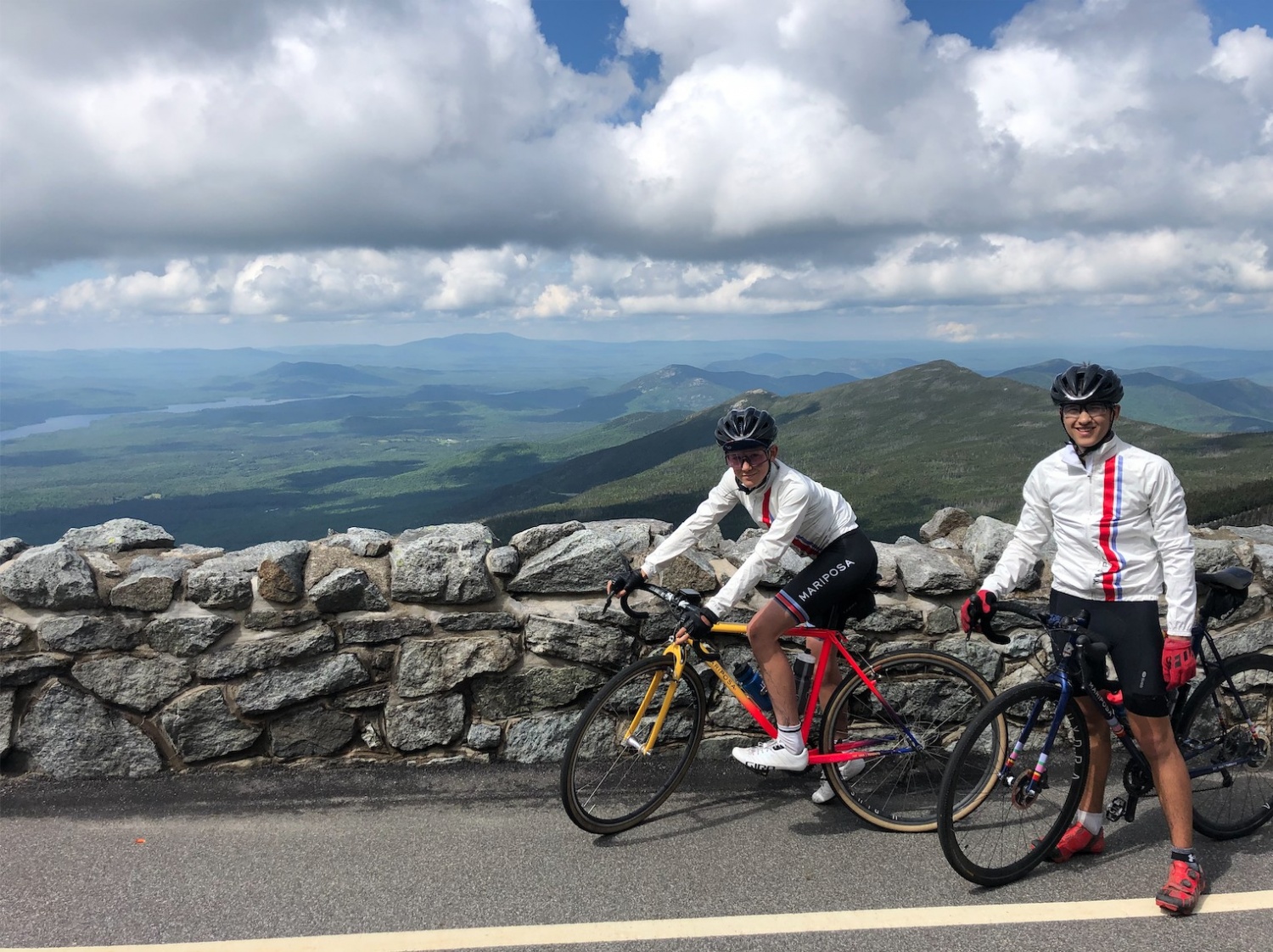 “I would like to do whatever it is, that presses the essence from the hour.” Ellen Meloy, The Anthropology of Turquoise

Rounding the final bend and climbing into the clouds they knew the summit was near. They dug in, squeezing out a few final potent pedal strokes. Their breathing became notably louder, even fierce, on the quiet peak. The experience was new to the two boys: The first big mountain, the first long effort, their first time riding into the sky. At the summit, they collapsed on their bikes to take in more air, to relieve the pressure on their legs and to stop the burn that had taken over their bodies as the ascent progressed. Thirty seconds passed. Their heads popped up with broad grins of joy and accomplishment. It was an experience they now owned—two boys on a mountainside, achieving something alone on their bikes that was notable and natural. They would turn around at the top, extending the experience and discovering new limits as they tore down the mountain at nearly 90 km/h. Escaping the virtual worlds so many people sink themselves into on their electronic devices the experiences on the mountainside were genuine and something they could grow from and hold on to for a lifetime. 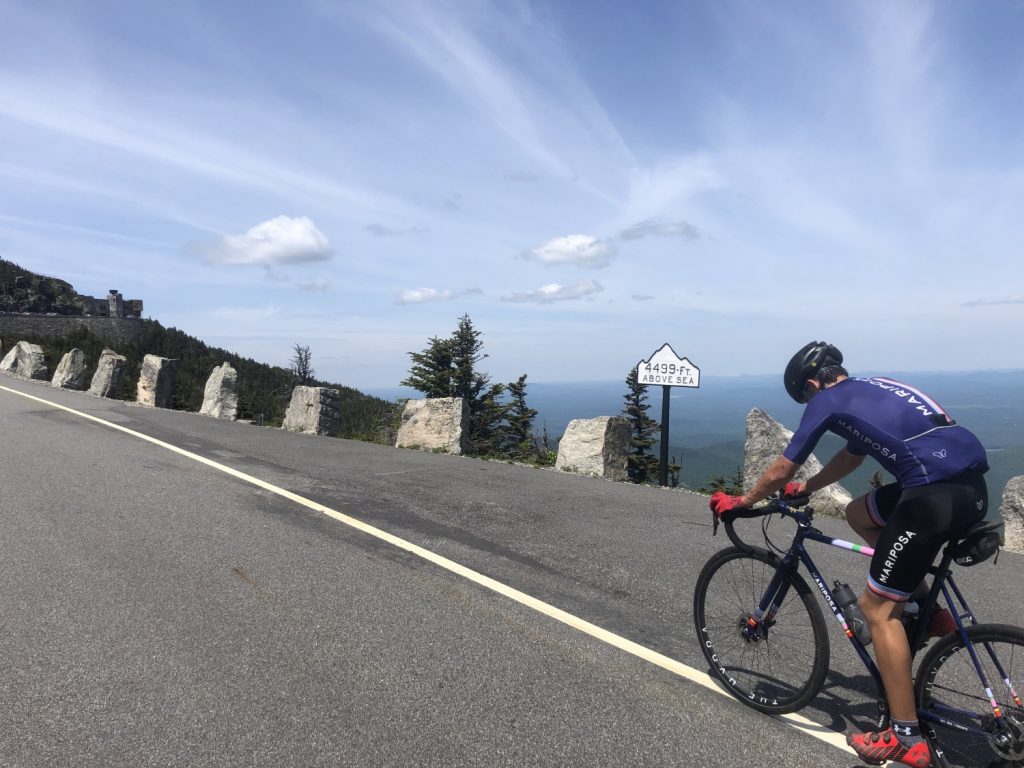 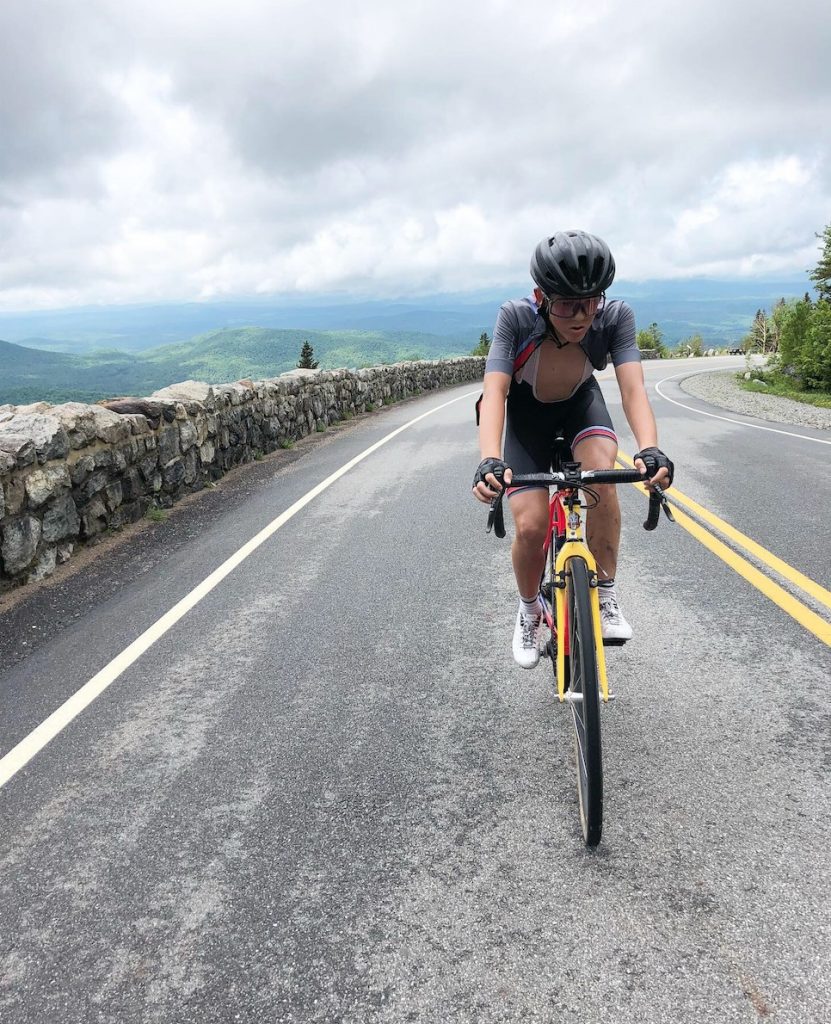 In late June, accomplished Canadian mountain biker and cyclo cross racer, Cameron Jette, and I took a few young riders to Lake Placid, New York for three days of riding in the hills. Lake Placid is the closest place to Toronto with climbs longer than a few kilometers. Once we left the suburbs of Toronto, the drive was an easy and scenic 5.5 hours from the city. The town of Lake Placid is a small tourist town which is easy to navigate on a bike. Our rental house was just down from the main street which has a variety of restaurants and shops (post ride burritos at Wyatt’s and ice cream at Ben and Jerry’s were highlights). The Olympic museum is in the town centre as well.  Not only did the town host the 1980 Winter Olympics but it also hosts a annual Ironman Triathlon. With hiking, skiing, skating, cycling, and swimming, it’s a sportsperson’s town.

Over three days, we ascended Whiteface Mountain, one of the Adirondack High Peaks, to 4867 ft (1483 m), rode part of the Wilmington-Whiteface Mountain Bike race course up and over Jay Mountain, and circumnavigated the lakes.  Although the main roads were fairly busy the tarmac was smooth and pothole free and the shoulder was usually wide enough to comfortably ride two abreast. Away from the main arteries we found quiet country roads which snaked up mountainsides, through farmland or by cottages and ski chalets. The gravel backroads seemed free of cars, or even people. Even after a lifetime on a bicycle, I still feel a sense of excitement as I ride into new terrain, and along roads or trails, that lead to places unknown to me. Sharing the adventure with others only makes it richer. 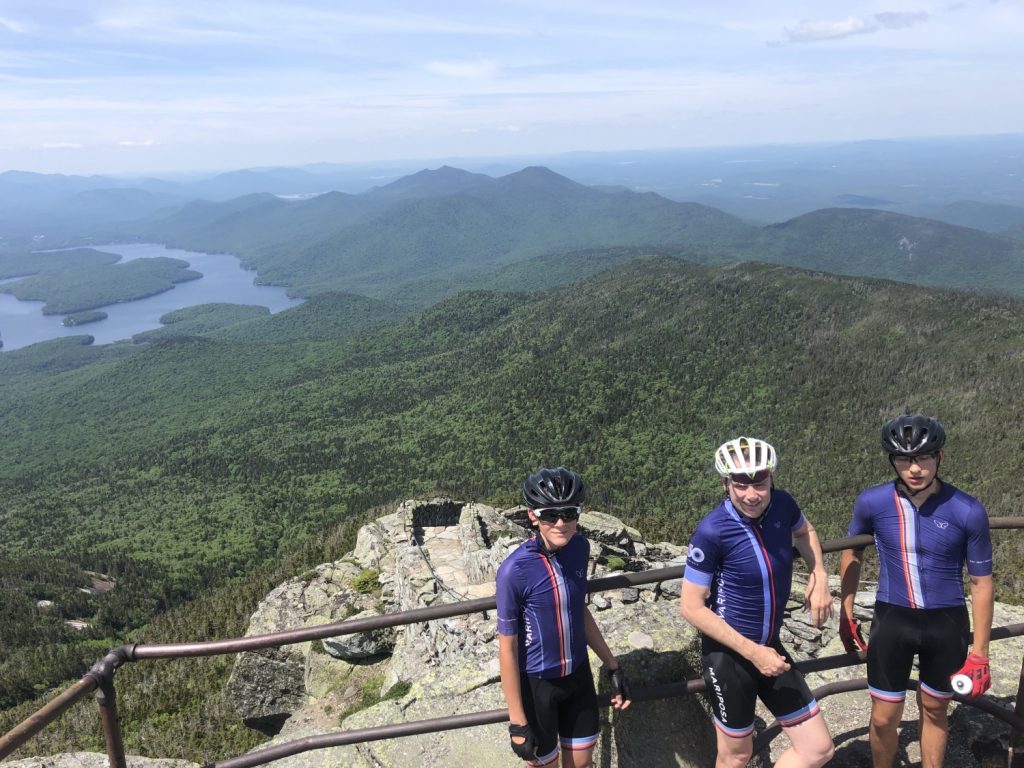 Not only did the boys ride over some new terrain but they also pushed themselves to achieve what they hadn’t before: they rode uphill at stiff pace for an hour, they plummeted down paved roads for kilometres, and they kicked up clouds of dust as they thrashed down gravel descents. During the time away, they may have come a little closer to understanding where their full potential may lay, because it is only through attempt, failure, and pursuit that we can grow in mental and physical ability. 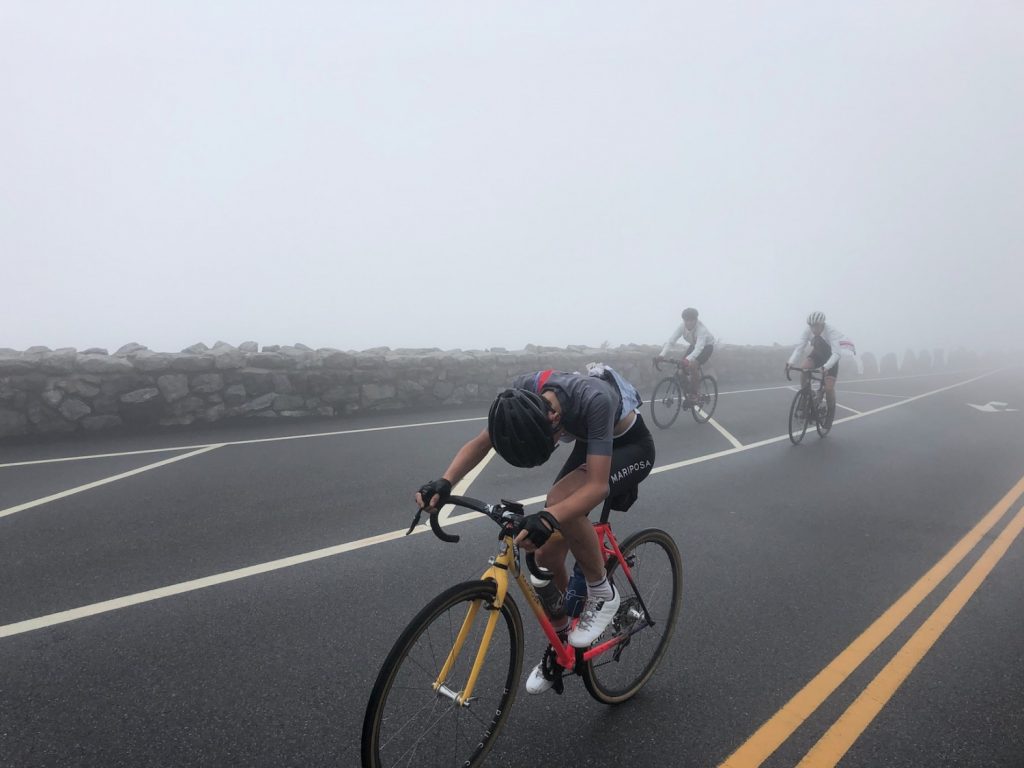 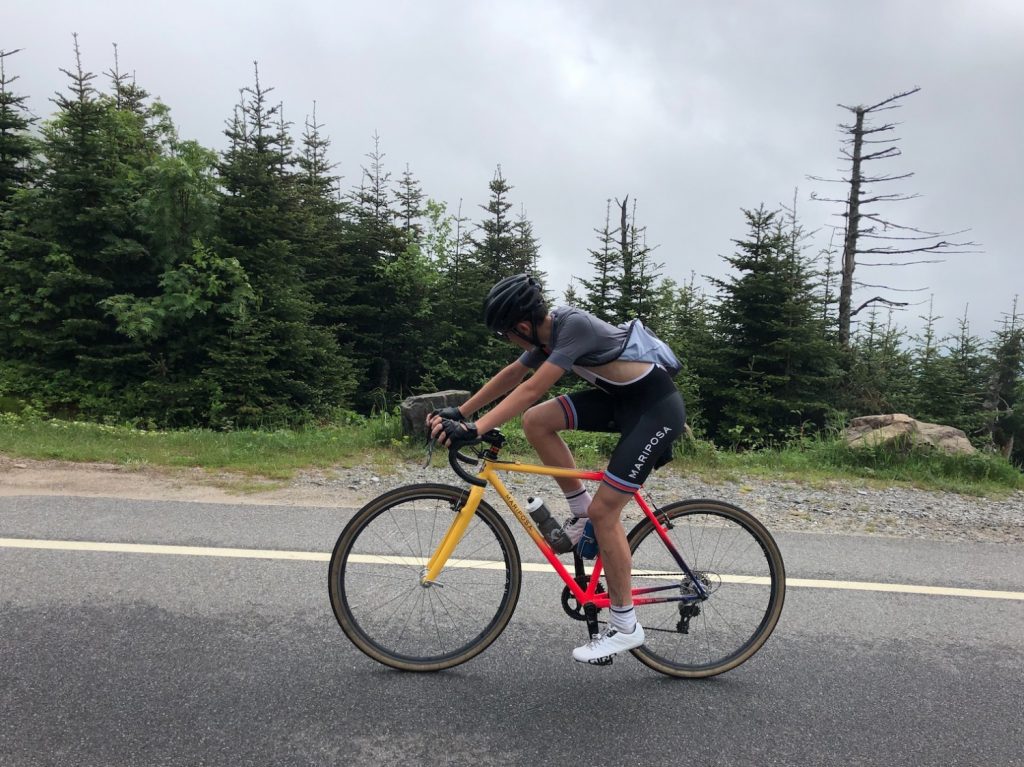 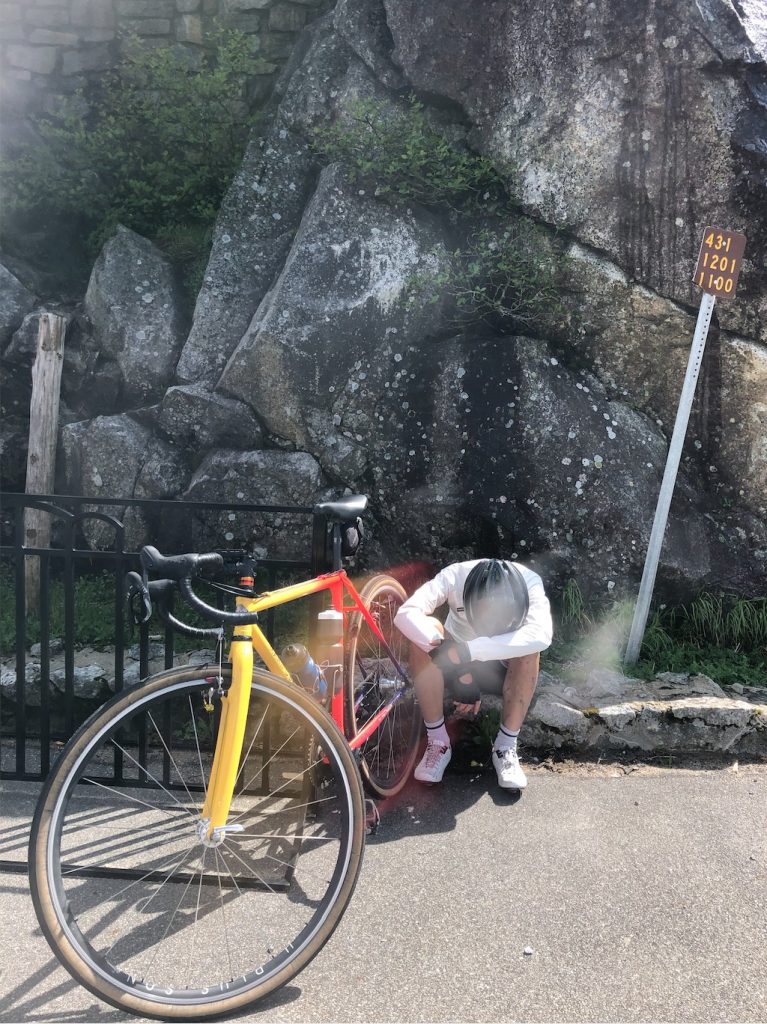 For a father and a friend, it is more than a treat to show the boys a small part of the life on a bike that I have lived. The greatest pleasure of riding comes not from the victory but from the process and the pursuit. The purity of being out on the road, without finish lines or spectators, tapping through a paceline with a small group, working together over the climbs to go a little faster and arriving together is unparalleled.

Through the trip, I thought of my father who died six months ago. I wanted to call him after the rides, as I know he would have been interested in the details of the route and keen to hear what the boys had achieved. He had taken me, my mom, my friends, his friends and customers on similar journeys, showing them the joy a bike could bring when it takes you beyond the routines of daily life.

Through a computer screen we can see the world but remain unsatiated and empty. Standing on a peak gasping for air, speeding down a mountain in a tuck, sliding through a corner in deep sand, and seeking to reach new limits, gives life.

Notes: -We all rode cross bikes (or gravel bikes/all road bikes) with all round tires. Two of us had Rene Herse Barlow Pass 38 mm tires and the others had 35 mm mixed terrain tires. The larger tires didn’t feel any slower going up hill on the pavement and they allowed us the versatility to find little gravel tracks off the main roads. Most notably, the larger tires with a bit more rubber are remarkably stable and fast going downhill, especially in the corners. The bikes were reliable, quick, comfortable and versatile–I’m not sure I would take any other bike on a trip.

-If you’re going to Lake Placid to ride, do a bit of route research before as there are numerous backroads which are much better than the main arteries. West of the town, towards Saranac Lake and beyond the roads and routes have less traffic and seem better for cycling.

3 thoughts on “Lake Placid: An adventure in the hills discovering new limits.”