Has gearing been the greatest technical shift in the last 20 years? 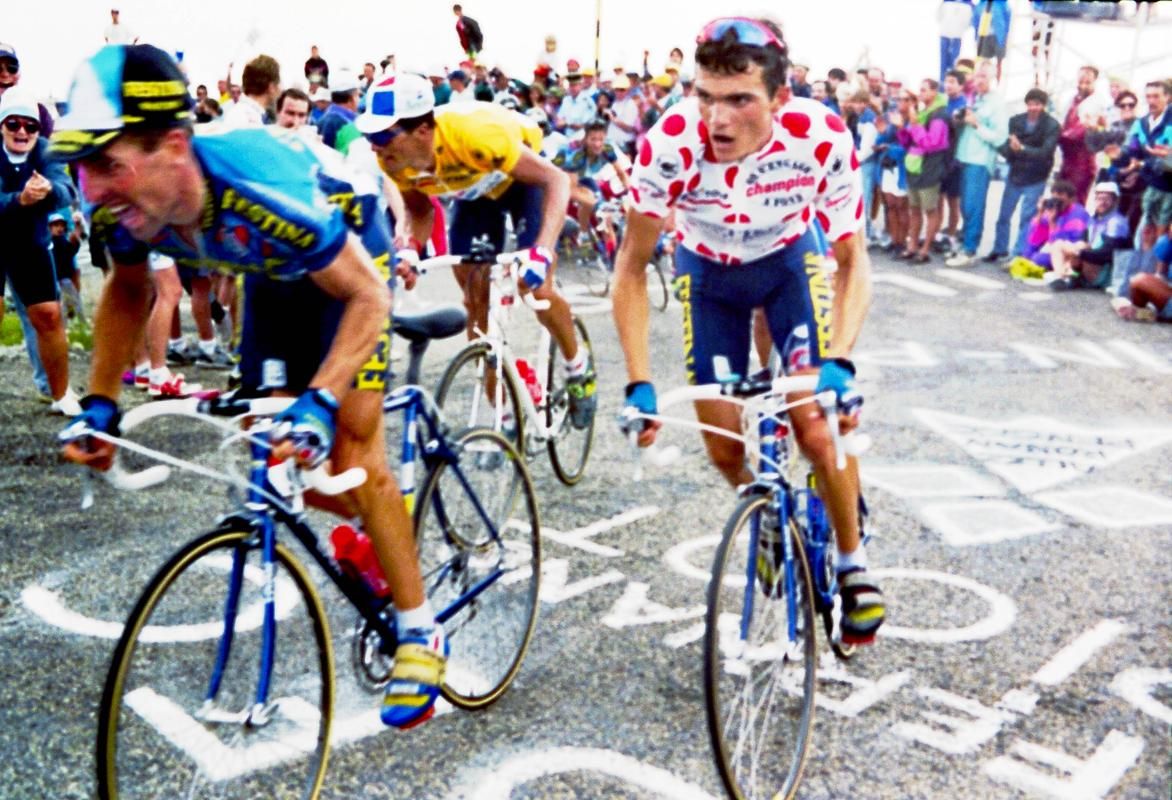 In the last 20 years, the most significant technological shifts in professional cycling have not been related to aero wheels or bike weight but the gear ratios riders choose to ride. Those changes, in turn, have altered the way riders train, position themselves on their bikes while climbing and improved their efficiency.“If you want to be in the lead group on the climb, you can’t use a 23 cog, the 42×21 is enough,” was the advice my directeurs sportif gave me when I was an amateur in the mid ‘90s racing in the Alps. At the time, the professionals swayed out of the saddle, as they hammered up the initial slopes of the passes in the big chainring.  In the ’94 Tour de France, Piotr Urgumov was in flight as he ascended Les Gets to the Morzine-Avoriaz ski station in the 53 tooth ring and Luc Leblanc rode in the big chainring as he muscled his bike to victory on the Tour de France stage finishing at the top of Les Arcs.

Like Eddy Merckx in the 1970s, and riders in the generations before, racers were often out of the saddle as their bodies swayed in a battle to keep the gear rolling. Our coaches told us to ride in the 53×17 all day to get stronger, regardless of the wind, or the terrain. Power meters were uncommon, so we gauged our efforts by time, speed, heart rate and the gear we rode. Until the turn of the last century, it was believed, that the bigger the gear the stronger, and fitter, the rider. Then there was a progressive realization that with a few more teeth on the back cogs and a few less on the front we would be more efficient, go faster and have fewer knee injuries. It might have been the doctor and coach Michele Ferrari, since banned for life from sport, who started the trend by encouraging the riders he coached to ride at higher cadences as he realized the physiological benefits. When asked about cadence in an interview he said,  “I had already worked with Tony Rominger at the end of his career on this; because I realized that the tendency to use big gears was causing problems for riders; problems with tendons and the back. So already with Tony in the 1997 season, he changed his pedaling cadence.”

The move towards lower gears took root when Lance Armstrong, while being coached by Ferrari, spun his way up the Tour de France climbs to victory in 1999. His cadence and position on the bicycle were markedly different to his rivals: he stayed in the saddle, spinning at a higher RPM with fluidity, while the others turned over larger gears, surging in and out of the saddle.  His riding style posed a stark contrast to his rivals.

In 2002, my first year racing with US Postal Service team, I was still using a 39 x 23 for training and usually I had a 21 on the back for racing. As we pedaled through the Texan hills outside of Austin at our first training camp of the year, Lance, who was on my wheel in our two-up formation, said, “Hey Barry! Where’s you 25?” I shrugged. “Tomorrow, make sure you have a 25 on the back.” And, of course, when we got back to the team hotel, I asked the mechanics to change the cassette. I always had one fitted to my bike for training after that until I switched to an even lower 27 tooth cog when I raced for Team High Road. Lance understood that his pedal stroke, higher cadence and seated position were more efficient. At the time, the way he rode was unique in the peloton, until, slowly most of the peloton adopted similar gearing and started training at higher cadences. And, due to the shift in gearing, parts manufactures began meeting the demand by manufacturing increasing lower gears ratios and the derailleurs to cover the range of cogs, which has only continued in recent years.

There is a widespread perception that the easiest way to make a road bicycle go faster is to use an aerodynamically shaped frame, aerodynamic wheels to to put an aero helmet on the rider. But body position is, by far, the most important factor. A cyclist will save far more energy by reducing his frontal surface area, by lowering and lengthening his body than by spending thousands of dollars on aero wheels. Even, a tight well-fitting jersey will have a greater benefit than a fancy wheelset. Lower gears on a climb allow a rider to stay seated for prolonged periods, which improves aerodynamics. As soon as a rider steps up on the pedals and shifts out of the saddle his or her frontal surface drag increases exponentially.  Lower gears allow a rider to stay seated for longer periods while also decreasing muscle strain. Also, studies show a higher cadence means an increase in blood flow to the muscles – which in turn, means more oxygen in the blood and a higher aerobic performance.  Professional riders are now using 30 tooth cogs on the back and 34’s, 36’s or 38’s on the front and they are often breaking the records up mountain passes.

At the start of a race, each cyclist in the peloton only has so many attacks, surges or intense short efforts before he runs out of energy. Like a gun loaded with bullets, each attack has to be used wisely or else, the rider can be left in a critical moment of the battle without any remaining ammunition. Not only do lower gears allow a rider to stay seated for prolonged periods, but due to lower torque when accelerating with intensity, they allow the rider to increase the number of attacks or surges. And because fluidity is increased less muscle damage is done with each effort.

On the track, gearing has also toppled records. But it hasn’t been because they’ve shifted to using lower gears but higher ones. Like a speed governor on a car, low gears on track bikes held the riders back: they reached max speed, spinning their fixed gears as fast as possible but limited by the number of RPM’s the body produce. For generations, it was thought that the lower gears were needed to get the bike up to speed from a standing start. But eventually it was realized that with a change in training and tactics, bigger gears could be used to produce higher speeds. In the last 20 years 4 km team pursuit times have dropped by 16.286 seconds as the speed has increased by just under 5 km/h.

Riding at high RPMs comes naturally to some riders, while others need to adapt to it.  Whether you are recreational rider or a serious racer, practicing to ride at a higher cadence will make your pedal stroke more efficient. In the beginning, it may feel uncomfortable as you lower your gears and increase your cadence.  Typically, riders will start to bounce on the saddle as they ride at higher RPMs, but over time and with practice your body will adapt, your pedal stroke will smooth out and you will become a more efficient cyclist.

2 thoughts on “Has gearing been the greatest technical shift in the last 20 years?”