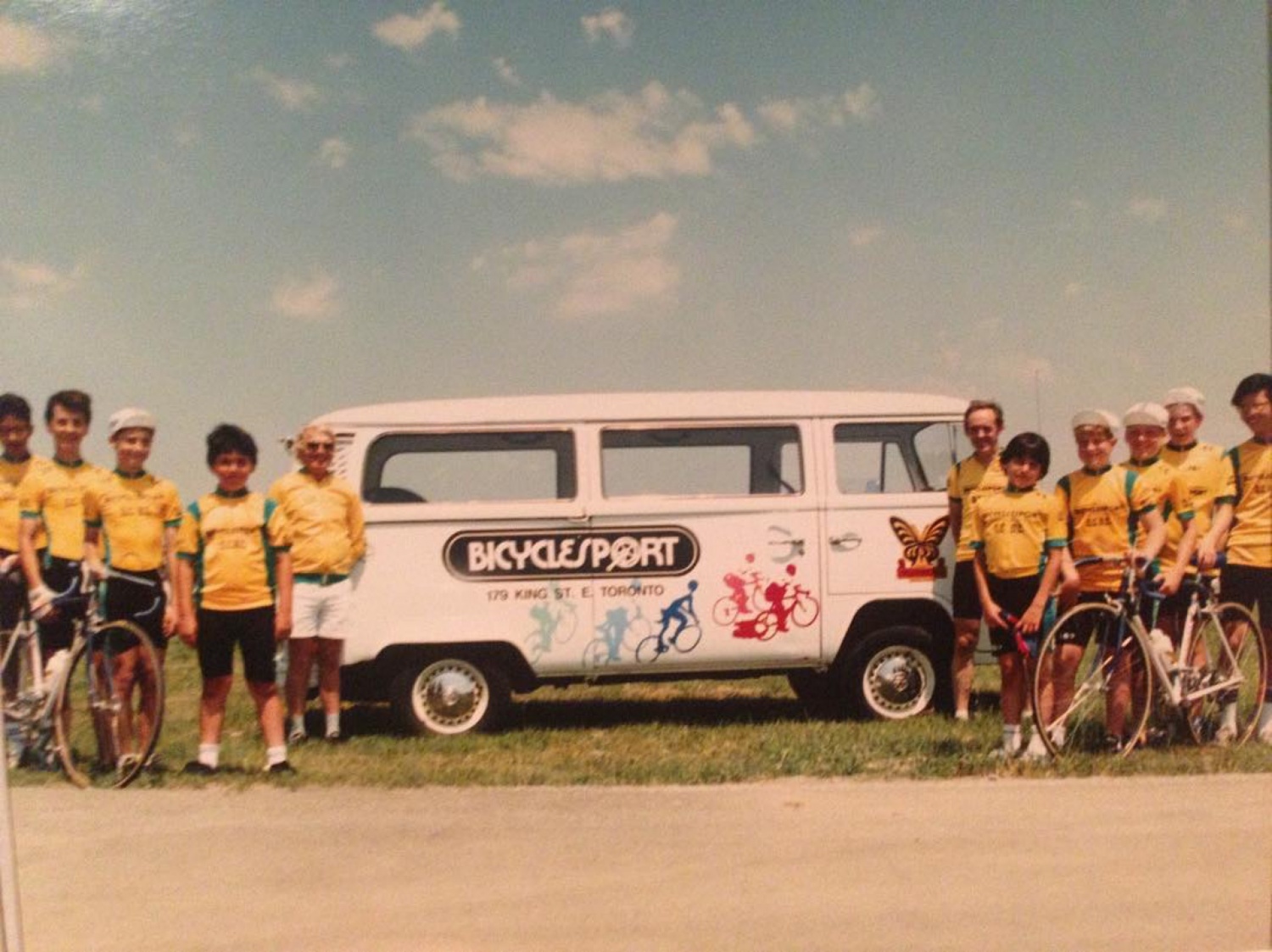 The van revved with ferocity as we crested the rolling hills on the eastern side of Lake Superior. They weren’t hills so much as slopes but my parents’ Kia van was loaded down with a team of nine riders. Our manager, the legendary Canadian coach Colin Hearth, was driving. We hoped to make it from Thunder Bay, where we had been racing, to Toronto in eighteen hours.  It would be closer to twenty-four. Without air conditioning, warm summer air thrashed at us through the open windows. Metallica blasted from the tape deck over the sound of the wind. The front wheels of the ten or so bikes on the roof, peeked out of the front windscreen, spinning on the rack. We were midway through the summer. This was our break from school and work. To us, this was camp. Nine teens rolling through the countryside, seeing new places, learning new things, and pushing ourselves to our physical and mental limits on our bikes. In many ways, I grew up in those vans, as did many of my friends and teammates.

We’ve always been a van family as they are ideal for carrying bikes to events, across town, or from a wholesaler to the shop. Before my father met my mother and opened the workshop, he drove a Mustang. A bachelor with a job working on technical instruments, he could pop the wheels off his bicycle, throw it in the trunk and rev and roar his way to the race. As he began a life with my mother, and a shop full of bikes, a van made more sense on every level.

The first of them was a Volkswagen microbus, which was also the first of many VW vans. It was painted with the shop logos on the sides with the world championship rainbow bands around the entire body (perhaps, a copy of the Campagnolo race service vehicle livery). 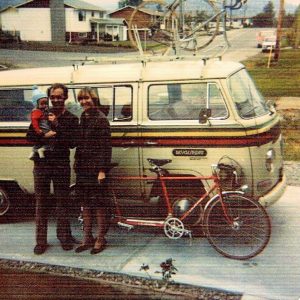 When I was still an infant, they drove across Canada to visit my grandparents and explore the Rockies. This was the 70’s before there was much awareness around road safety. My dad took the middle seat out and put a blanket down creating a playpen so I could roll around and stretch my legs on the long drive. The tandem with a bucket seat for me, was strapped to the roof. I think my dad and mom might have also had their solo bikes along for the trip, so they could get away while I was with my grandparents.

The day they left for the west they had been at a race in Mount Nemo, a small town just outside of Toronto on the side of the Niagara escarpment where they often went to, or organized, races. Wearing his striped shirt, my Dad was the commissaire for the day. It was a team time trial where four men rode together to record the fastest time over the distance, which was probably around 70 km. Soon after the race finished, several riders and spectators came to him with protests that one team had been adding a rider on the back side of the course to help with the effort. He would pull out before he came near the start finish, ride backwards on the course, wait at the roadside, and wait until the riders came around again. As my father listened to the protests, he told the organisers to withhold the licenses (if there were protests, the commissaires held onto the licenses until it was settled) and hold back the awards until they came to a conclusion on whether or not an infraction had occurred. Hearing this, the wife of one of the implicated riders, took the box of licences which my mother was holding, and threw them across the room, yelling obscenities. Moments later, her husband slugged my father in the face. Even the local Ontario racing scene could be as ruthless as the European. Without missing a beat, my father packed up, walked away and we were off to Alberta in the van.

I’m not sure what happened to the van but it was replaced with another brown and beige VW. Perhaps, they decided it had had its day when the sliding door fell off on the highway while I was sitting in the child seat on the back bench. At the same time, my Dad’s business partner, Mike Brown, bought an identical one in blue and white. So, the shop now had two vans to shuttle riders and bikes to the races. They became a communal point for the race team and Toronto Randonneurs. 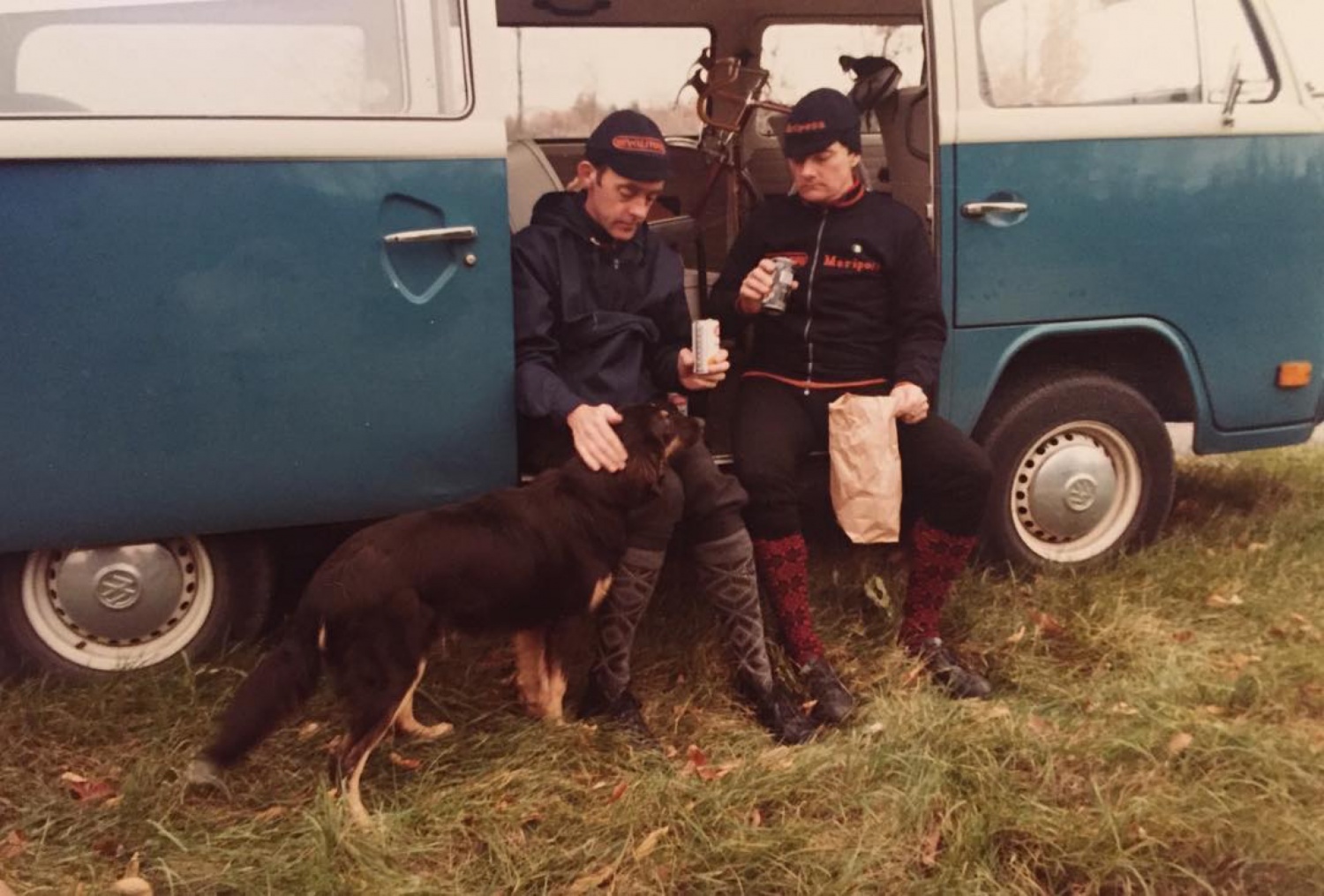 My mother and Mike Brown’s wife Jackie would often run the passport controls during the Randonneur events, to check everybody had completed the distance. The van would be loaded with their daughters, Lisa and Vanessa, and me. With the three kids  asleep in the back seat at 2 in the morning, they would wait for the riders to pass so she could stamp their passports before they pressed on for another couple hundred kilometres towards the finish. I was about six at the time but the memories of worn but ebullient riders showing up under the light of their wheel powered generators in the early morning is still clear. There was also a jovial atmosphere in the group, even when the times were tough and the weather was foul. I guess, like most club cyclists who ride together for hours and help one another to achieve something notable, they developed a bond in their camaraderie.

The new vans soon became old and rusted through the floor panels. They were too hot in the summer and the heaters never worked in the winter. The plastic seats either burned your bottom or froze it. The blue one, which was painted in the shop colours at some point met its demise at a charity ride in the mid 80’s. The shop mechanic, who was in charge of the service for the day, showed up at our house that evening without the van. When I asked him where it was, he simply said, “Gone. It burned to the ground.” And most of it had. But before the engine fire completely engulfed the van and the massive old tree above, he managed to save the spare tubes and tires he had brought along to service the riders in the event. 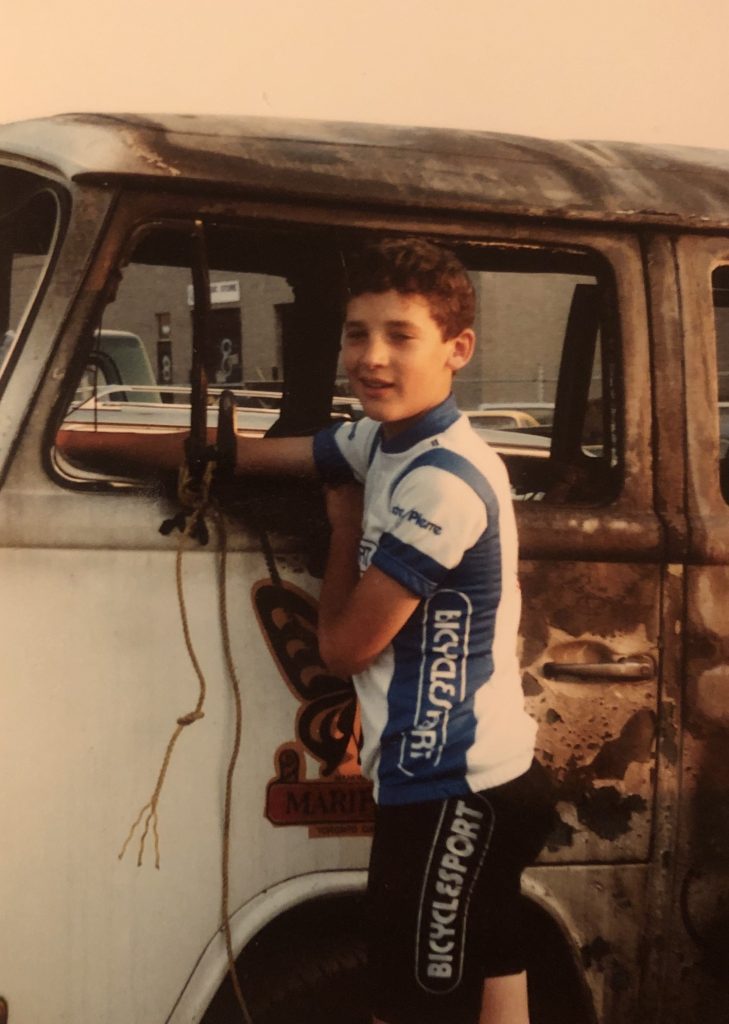 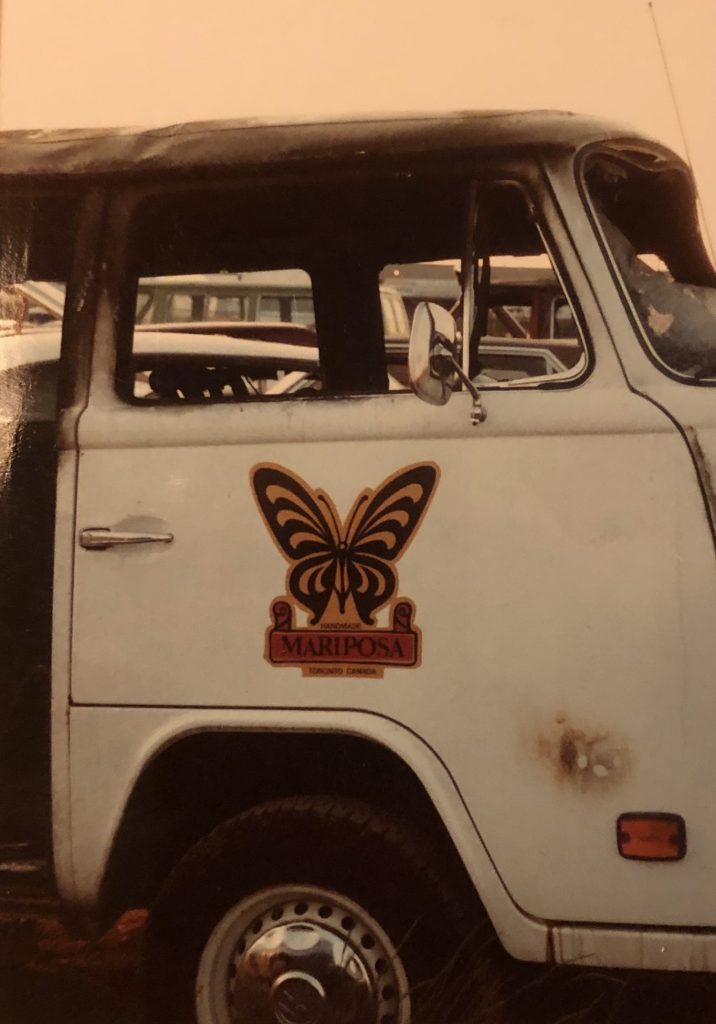 My father, always one to love a deal and a good van, discovered the Kia. The vans were only brought into Canada for a short period as the company was caught for dumping them on the market. My dad bought two for the price of one VW and then bought a third. They also were bigger, more comfortable, slightly more reliable, pretty good in the snow, and they lasted for at least a decade of heavy use.

The Kias were the vans of the 90’s for our family and the shop.  Like the VW’s they were the gathering point for the club. My parents would load them up with kids and bikes and travel to the US, Quebec and all over Ontario. Several of the kids they took had never left the city, making those road trips an adventure of a lifetime. The racing almost became secondary to the journey. 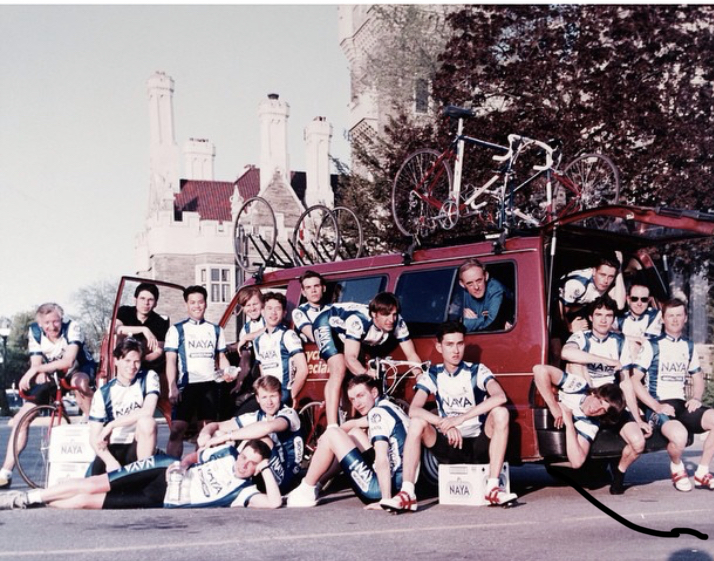 The Kia Team Mariposa van in the early 1990s

In the coming weeks, I am planning a trip to Lake Placid in our Honda Odyssey van with some Team Mariposa riders to train for the upcoming races. They may not be the sexiest of vehicles, but they are the most practical and they’ve certainly built communities and friendships. 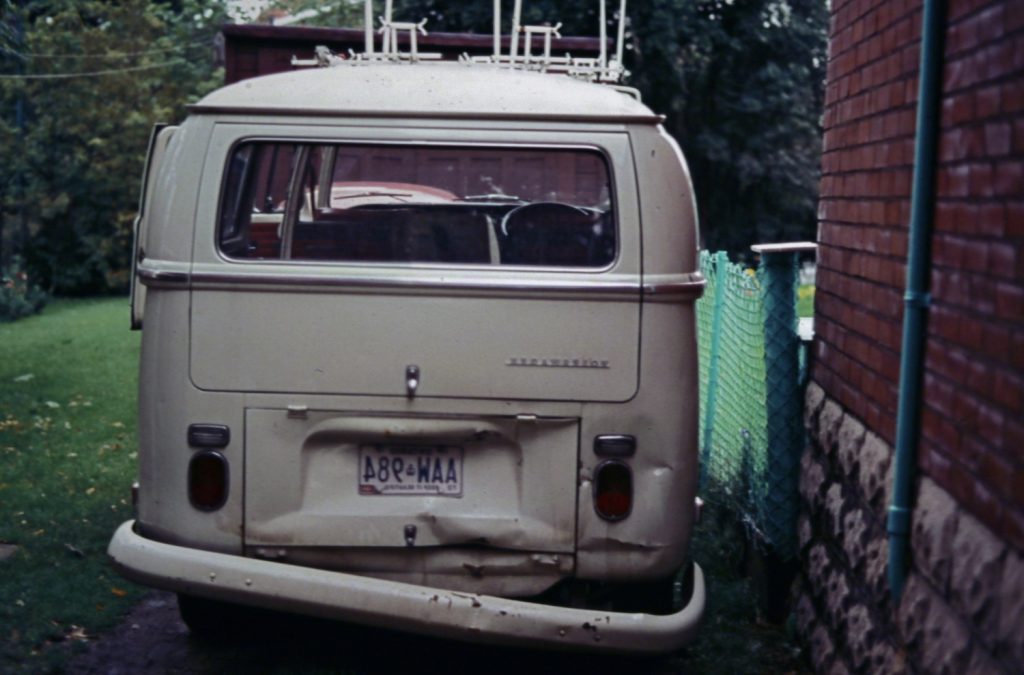