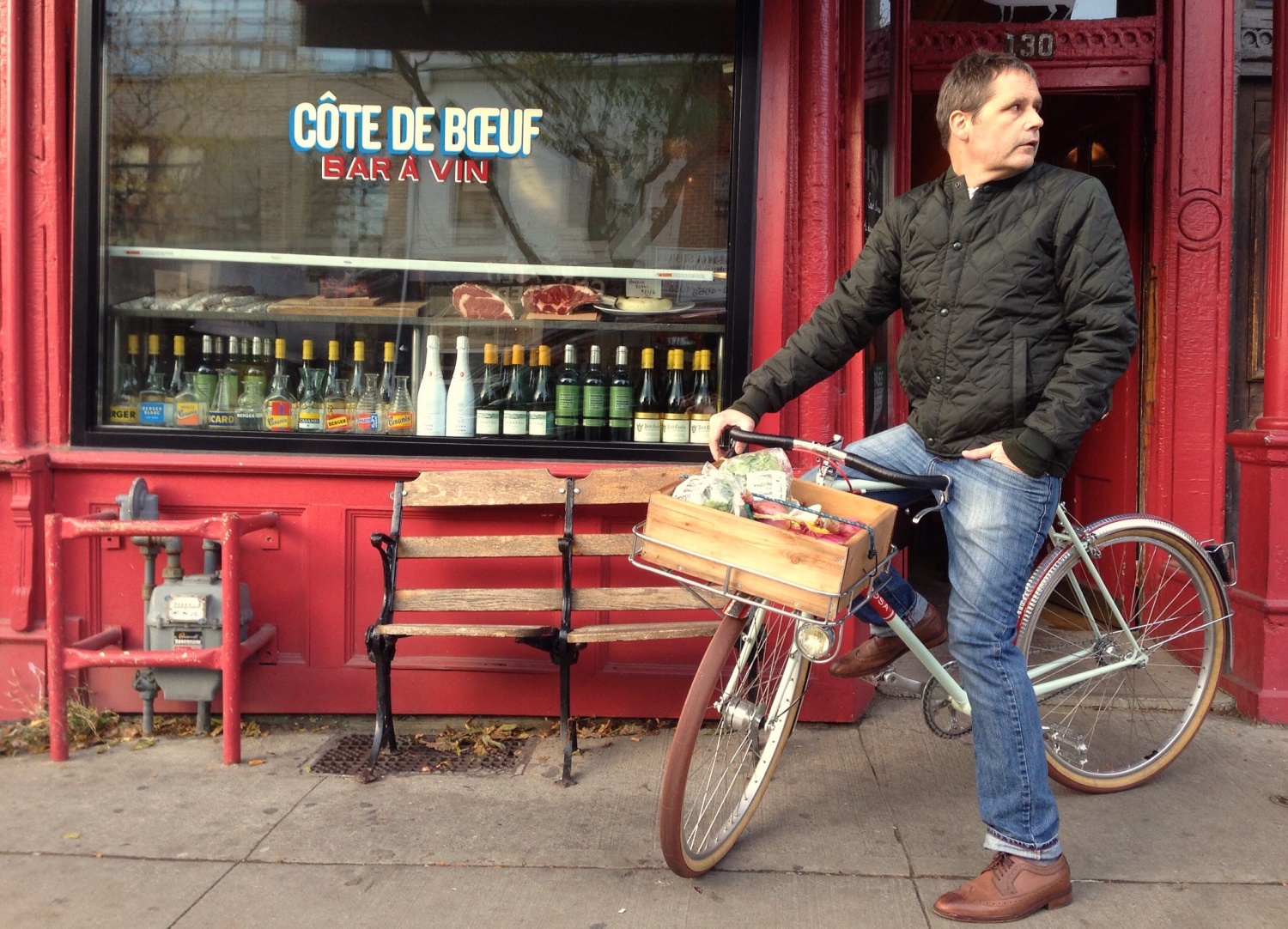 Chris’ passion for life emanates whether he is cooking a feast, pedaling across the country, commuting to work or riding through the ravines. Having lived, traveled, cooked and raced around the world, the bicycle is woven into the fabric of his life.

Chris is a Brit, who moved to Toronto as a teenager, became a chef and started cycling after moving away from the scooter (Lambrettas) scene. A bike and a scooter were his transportation to and from work and about the countryside. But, once his motorcycle license expired it was never renewed and the bike became his sole form of transport. It has remained that way for the last 20 years. Not only did he race on the road and mountain bike but he was also keen on cyclocross, and quickly became one of the best in Canada.


Chris Mathias picks up fruit and veg at the Kensington Market


There are a few dozen riders I love to ride with because they know when the ride is social, when it is time to push the pace, when it is time to ease off and, in doing so, they know how to achieve a rhythm on the bike that makes a good ride great. They also understand that a group ride isn’t about the individual becoming a standout but the collective achieving something together. Others, no matter how many kilometres, or years, that they ride, they push the pace at the wrong moments, half wheel, don’t wait for others when they have a flat tire and, more generally, don’t understand the etiquette of cycling. Chris knows how to ride. Since I was in high school, and he was a young 20 year old, we’ve been riding together, whether in Europe or Canada.

A few years older than me, I would race home from school to meet him after work for a ride. Under the late afternoon sun we would ride into Toronto’s extensive park system on our cross bikes. Running up a ski hill, looping over the grass fields, snaking through the trails, we pushed each other. Chris was training for the cross season, but most importantly he was also training for the Three Peaks, an tough cross event in the Peaks district in the UK that only a few Canadians have ridden. As the sun set, we would ride our last lap, a little faster than all the others, just to get in that little extra push that might make the difference come the end of a race. Riding home on the city streets, we would chat as the chill of winter crept into the fading summer air. Though those rides were 25 years ago, I still remember them vividly, which is the case with most of the good rides I’ve done with friends over the years. 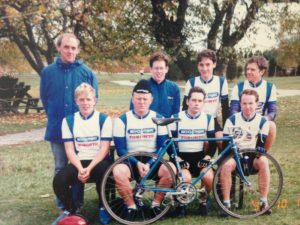 As the years passed, I left for Europe to race and Chris opened his own restaurant in Toronto, aptly named Innocenti, after the company that manufactured Lambrettas. It was a wonderful place. Like Chris, it was casual, unpretentious and cool. It was the first restaurant in a neighbourhood that soon after became chic. Not long after the restaurant opened, I can remember him saying that he no longer liked the place when he achieved a top review in a well read city magazine as the atmosphere changed over night. Black cars pulled up out front to unload people who were more interested in being seen than enjoying the meal. With Chris, it was never about the money or the prestige but the passion. His cool wasn’t forced.

From Toronto he moved to Paris to open another restaurant. While there he would often come to my home in Girona, Spain to visit us for a week or two. We would again ride together. The first days he would sit in our wheels, unfit from long nights on his feet cooking and living the chef’s life. Tucked in behind George Hincapie, Christian Vandevelde, and my other teammates, he found our rhythm, and never upset it. He pedaled with the same ease he handled a knife in the kitchen; the bike was an extension of his body. His fitness quickly improved, like any veteran cyclist’s does with a few good rides, so that by the time he packed his bags for Paris, he could beat his best time up the local climb, Els Angels. In the evenings, tired from the rides, we’d saunter around town, looking for a restaurant to eat dinner. Then, under the din of the residents chatting in their apartments, the clanging of plates being cleared from patios and banging of bins as the garbage men did their job, we’d sit on a bench in the centre of the stoned walled town, stretching our legs, and laughing.

Today, we are both back living in Toronto. Chris is working as a chef and manager of Côte de Boeuf, a wine bar and butcher shop in the heart of the city. Although neither of us has time to ride as much as when we were younger, the bike remains a fundamental part of our daily lives. He uses his to pick up groceries from the markets or to meet friends for a drink. Soon, I hope, we’ll be back on the trails, or riding together through the Catalan countryside.

One thought on “A CHEF’S PORTEUR”