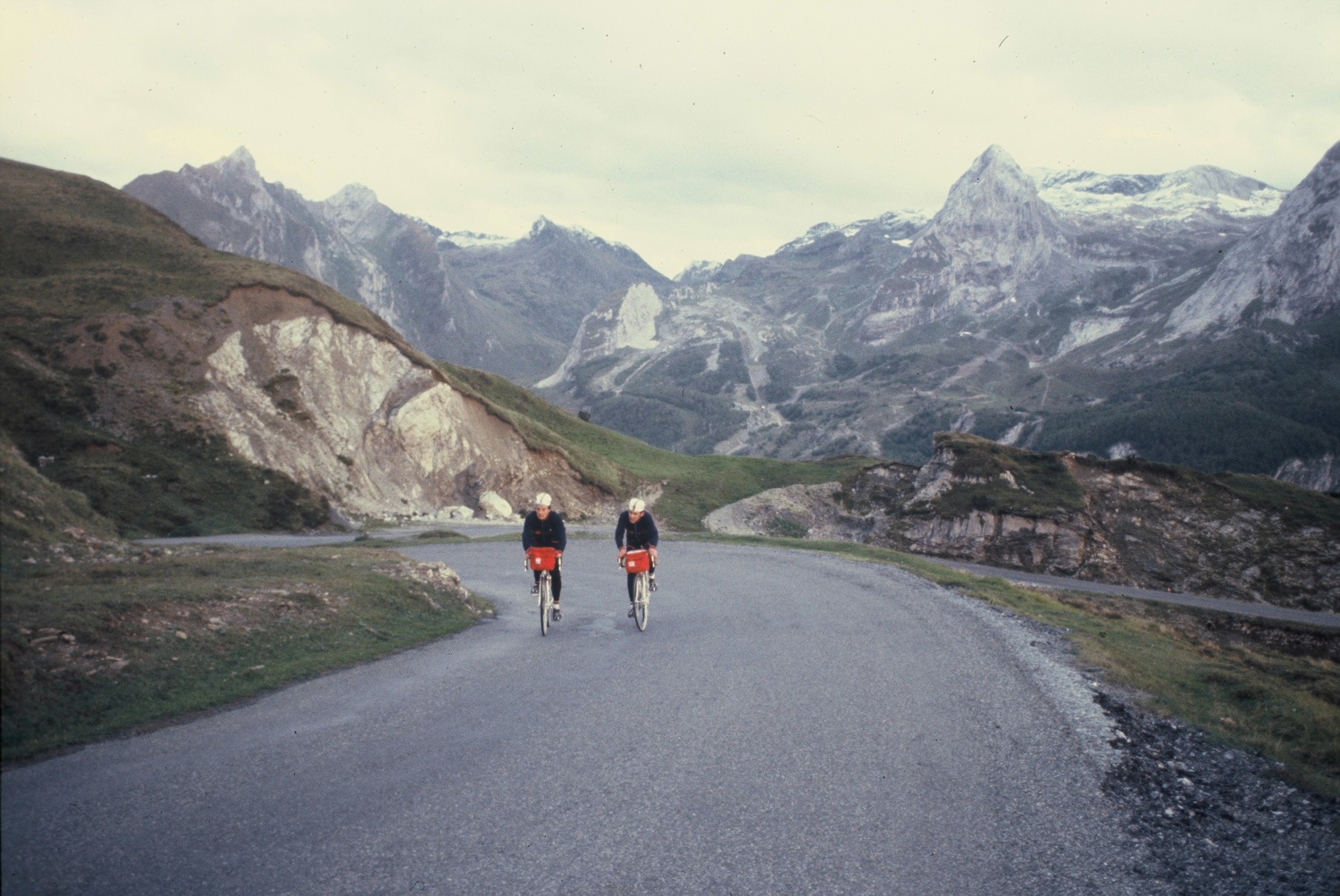 In the seventies I read an article by renowned British journalist and my good friend, Jock Wadley where he mentioned a ride across the length of the Pyrenees named the Raid Pyrenean. The event immediately interested me as I feel these are the most beautiful mountains to ride through with their open roads, majestic views and small stone houses in mountain villages. For this and the challenge of a ride seemed like something I had to do. From the Atlantic to the Mediterranean, the ride crossed most of the famous Tour de France cols, where my childhood heroes had made their mark in cycling history.

However it wasn’t until 1981 when my business partner at Bicyclesport, Mike Brown and I decided that we wanted a really good challenge that I finally made it over. I mentioned the Raid to him and he was immediately keen to give it a try. We had done several good long rides together and always got along well. He didn’t half wheel me, we rode the same tempo, and the conversation was always interesting. 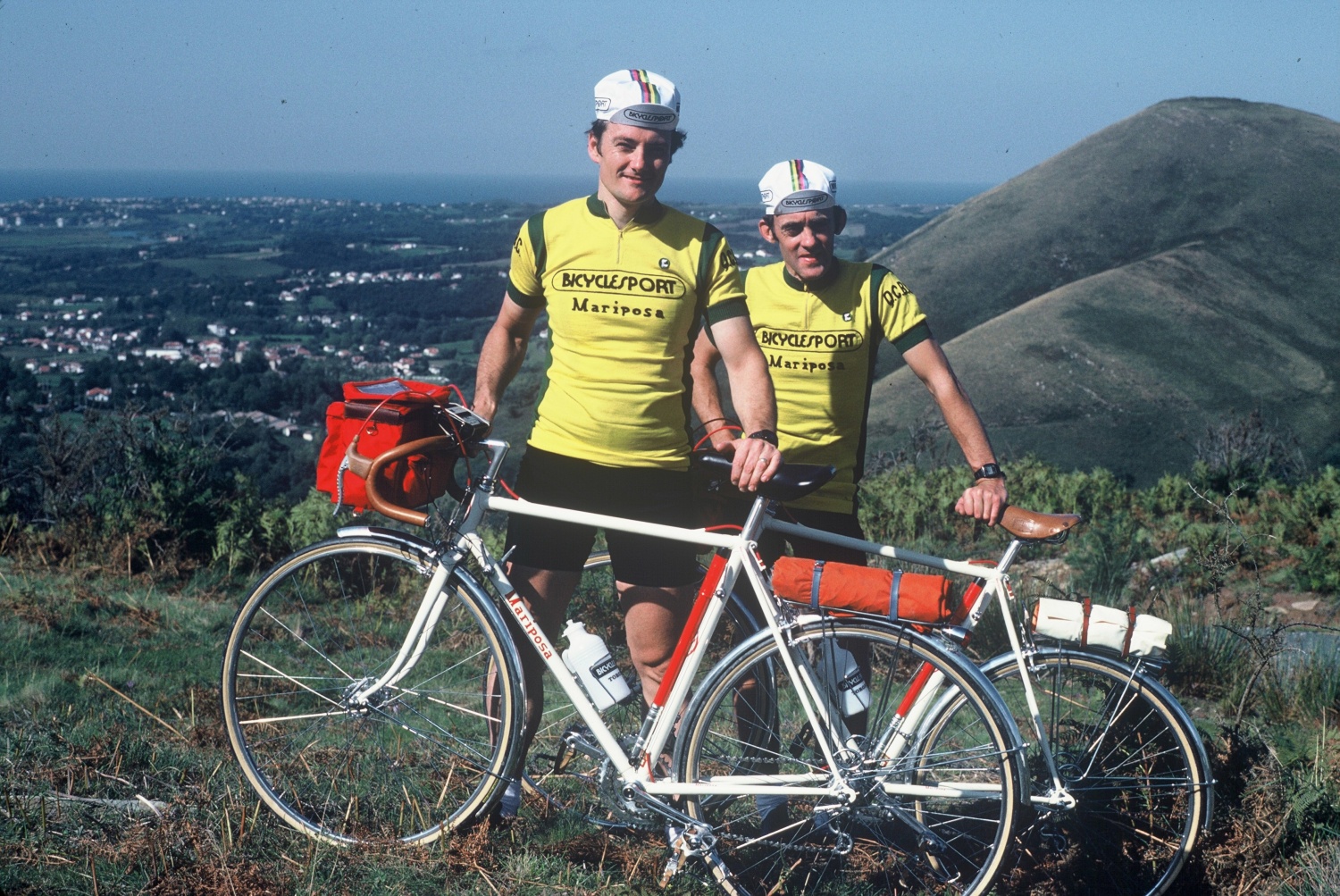 I contacted Jock Wadley and he put me in touch with the Raid organizer in Pau, France. The Raid Pyrenean is a “permanente”, one of many routes set up across France by the French Cycle Touring Association. Anyone can ride a permanente at any time, although there are some limits on the mountain routes as passes are usually closed in the winter. 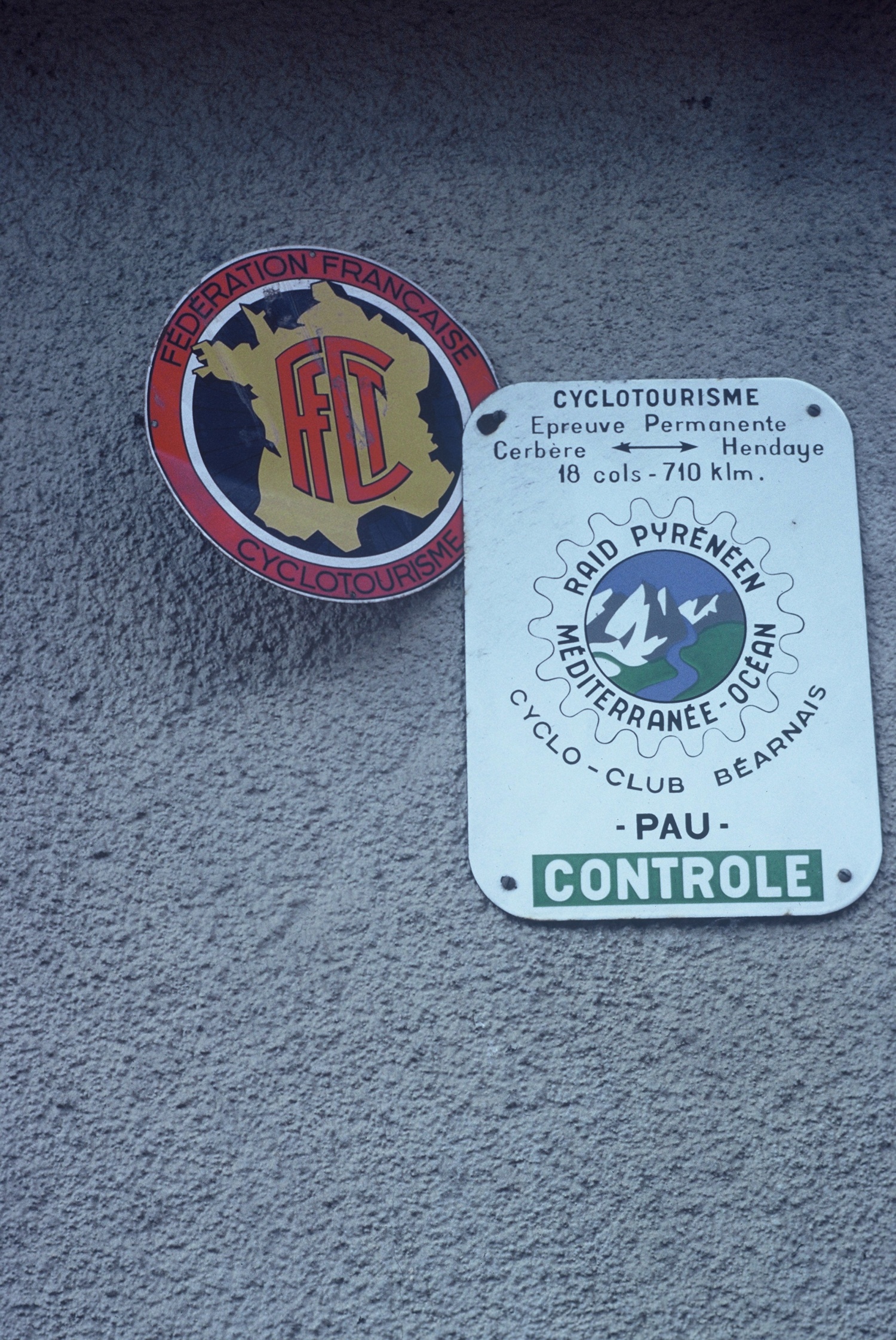 Mike and I decided to attempt the Raid in the last available week of the 1981 season. The route is closed at the beginning of November because of the likelihood of snow after that date. We chose the late date because our busy store, Bicyclesport, made it difficult for us both to be away earlier.

The route is 720 km long and there are eighteen “cols” or passes to be climbed between the start on the Atlantic coast at Hendaye and the finish on the Mediterranean at Cerbere.

We registered with the organizer in Pau and picked up our control cards from him on our arrival in France. The control cards must be time stamped at controls along the route to ensure that the route is ridden and completed within the 100 hour limit. The controls are usually situated in restaurants but should the control be closed then one can get the card stamped at a post office or other official building.

If the control card has all the necessary stamps and you arrive at the finish within 100 hours from the start you will receive the official medal.

Mike and I had two new Mariposa bikes built for the ride. The bikes were still being assembled just hours before our departure so we had no possibility to try them out. We were busy with the shop and our priorities were with our customers.

We flew from Toronto to Paris and then took the train down South to Hendaye. A good friend, Bob Zeller, who had agreed to go along and drive a support car, accompanied us.

The first day started before dawn at six o’clock, our generators lighting the way. All went well but when we arrived at the Col d’Aubisque I was feeling unwell. That night, I was violently ill with a fever. However we had to be up and on the road again at six the next morning with the Col de Tourmalet coming almost at the start of the day. I was in no state to enjoy the climb and struggled over the summit, in falling snow, sometime after Mike. Despite the effort required my fever diminished somewhat and we were able to finish in Cerbere in 76 hours. (We were misinformed and thought the time limit was 80 hours and not 100).

Just before we left for the ride I had spoken with Jock Wadley. We discussed the Aubisque, Tourmalet, Aspin and other major climbs made famous by the Tour de France. Jock had an intimate knowledge of them all from his days as a journalist as well as touring cyclist. He said, “yes they are the big ones but don’t forget the Portet d’Aspet”. That is a climb that I will now never forget. When Mike and I reached the base it was late in the day, getting dark, raining steadily and the wind was picking up. In a short time Mike dropped me and his rear light disappeared on the switchback turns above. The light from my generator, diminished somewhat by my slow speed, was barely sufficient to make out the road ahead. I was suffering but eventually made the summit where I was delighted to find Bob Zeller in his car. Mike was already inside warming up and enjoying food and drink that Bob had bought for us. I joined them and revived while the car rocked in the wind howling across the summit. Half an hour or so later Mike and I braved the elements and rode the twenty kilometre descent to our hotel. 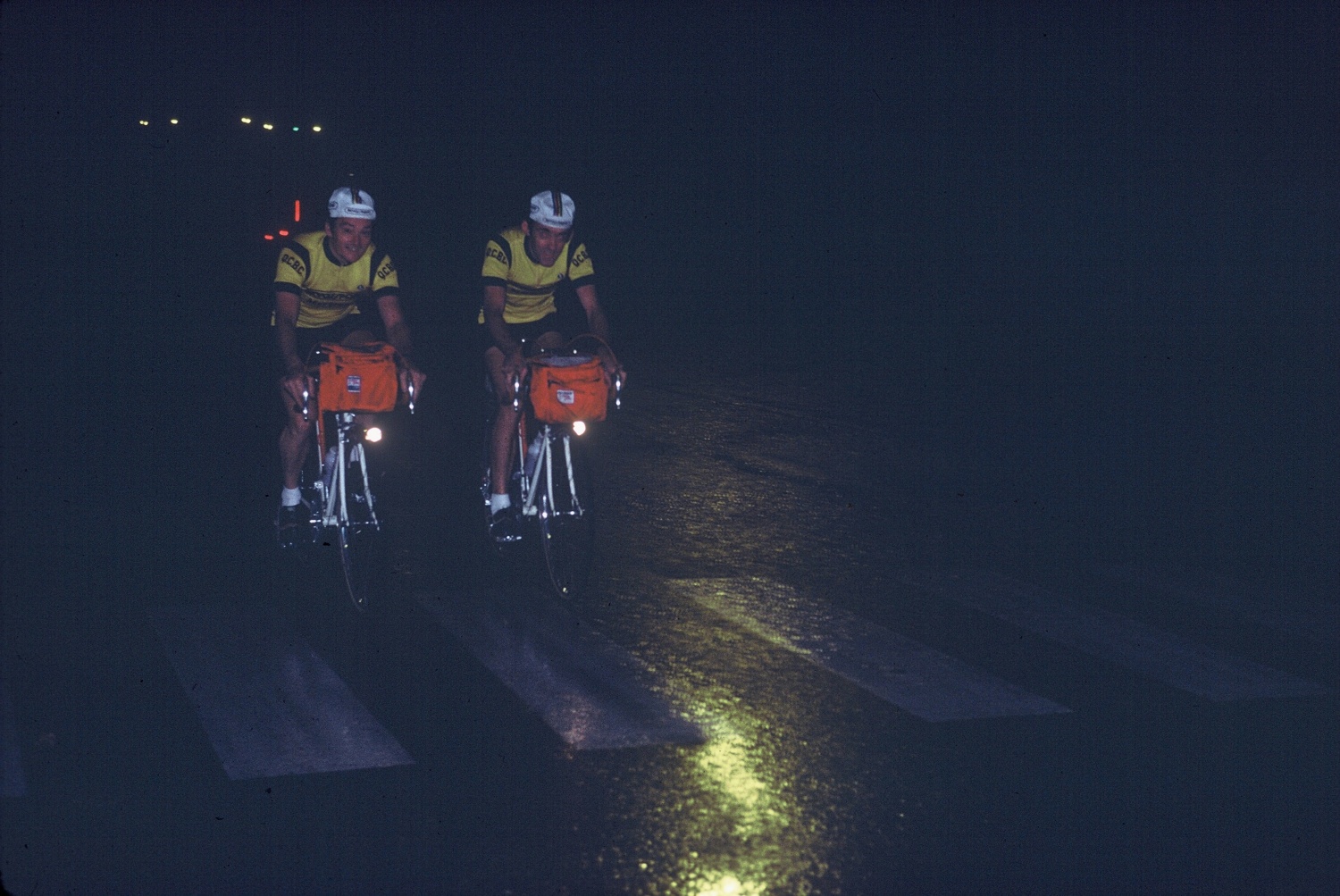 At the base of the Portet d’Aspet

Mike and I had been the first riders from North America to finish the Raid. Bob Zeller wrote an article on our ride for the UK magazine Cycling (now Cycling Weekly). The article stirred a lot of interest in the English speaking World and soon there were many British, Americans and Australians riding that route across the Pyrenees. 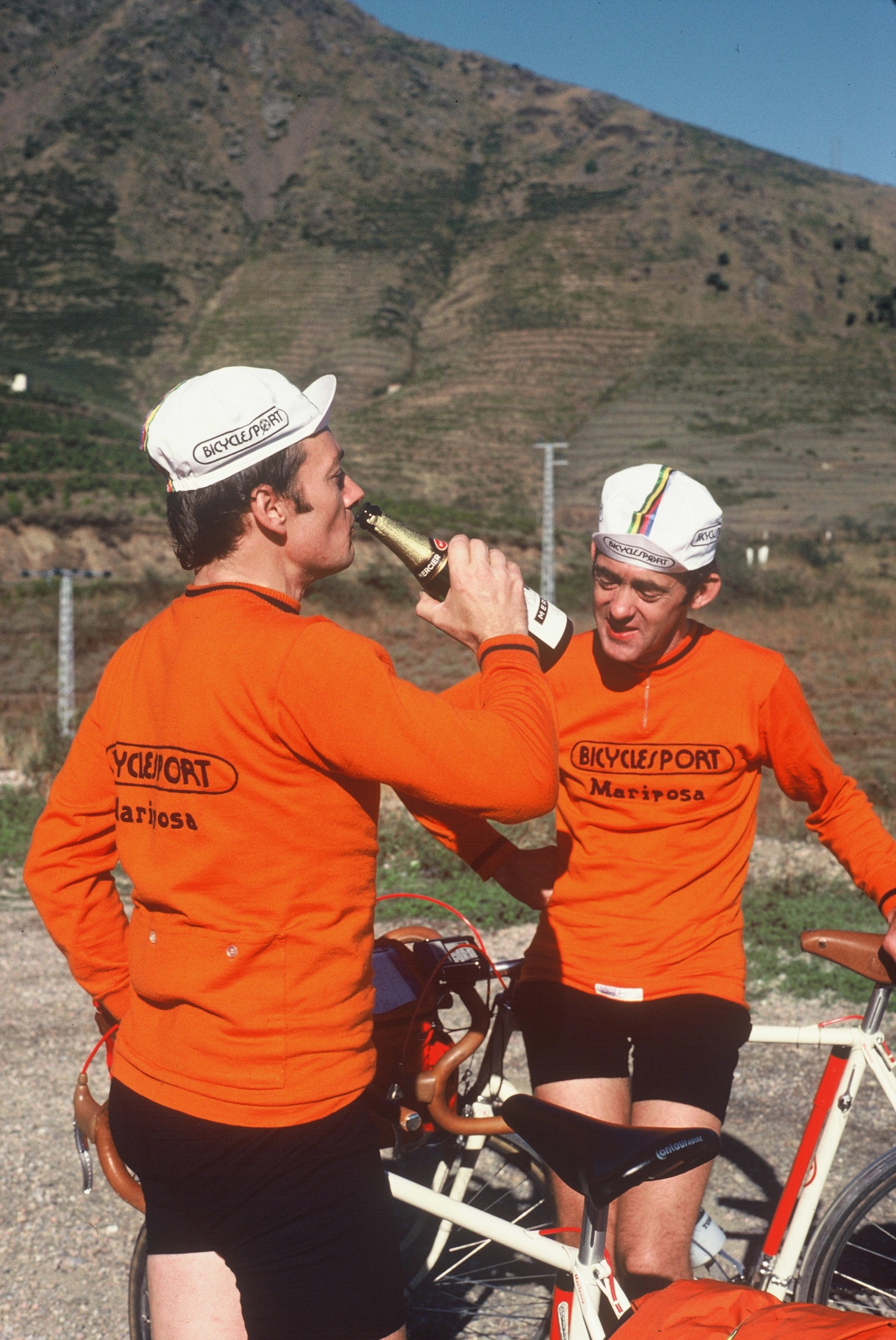 Mike and Mike celebrating the finish in Cerbere

Sick, the ride had been a real struggle for me and although I was pleased to have finished it I said “never again”.

22 years later, in 2003, a group of Toronto riders decided to make an attempt at the Raid. I couldn’t resist it and decided to join them. This time I found it much easier. We had great support from Nick at “Pyrenean Pursuits” who, in conjunction with Toronto locals Geoff Gadd and Judy Watt, organized the whole trip. It was scheduled at a better time of the year– early September– so there was no snow to contend with like we had on some of the higher passes in 1981. Also Nick scheduled our ride to finish just within the 100 hour limit. The extra day made it far easier.

This time round the Port d’Aspet was still a struggle but in warm sunlight and little wind it was far easier than in 1981. Good friend Dougie Kerr and I battled it out together with Dougie getting the better of me at the summit after we had stopped briefly to pay our respects at the Fabio Casatelli Memorial which marks the spot of the Olympic Champion’s tragic death in the 1995 Tour de France.

There is a lot more traffic now than there was in 1981. The last day down to the coast in 2003 wasn’t too enjoyable as the roads were too busy. The rest of the route was OK but the tourist trap of the Mediterranean coast makes that area not too enjoyable for the cyclist.

I had another new Mariposa for my second attempt. I call it my ‘mountain bike’ as it was built for the mountains. It has a triple crankset with 52/42/30 rings and a 10 speed cassette with 13-26 sprockets. I found those gears to be fine. I fitted fenders as it always seems to rain in the mountains and a small carrier to strap those clothes to that are needed for the descents but not the climbs. Most of the other components I chose to reduce weight. No lights this time, I figured that with the schedule Nick had set up we wouldn’t be riding in the dark. 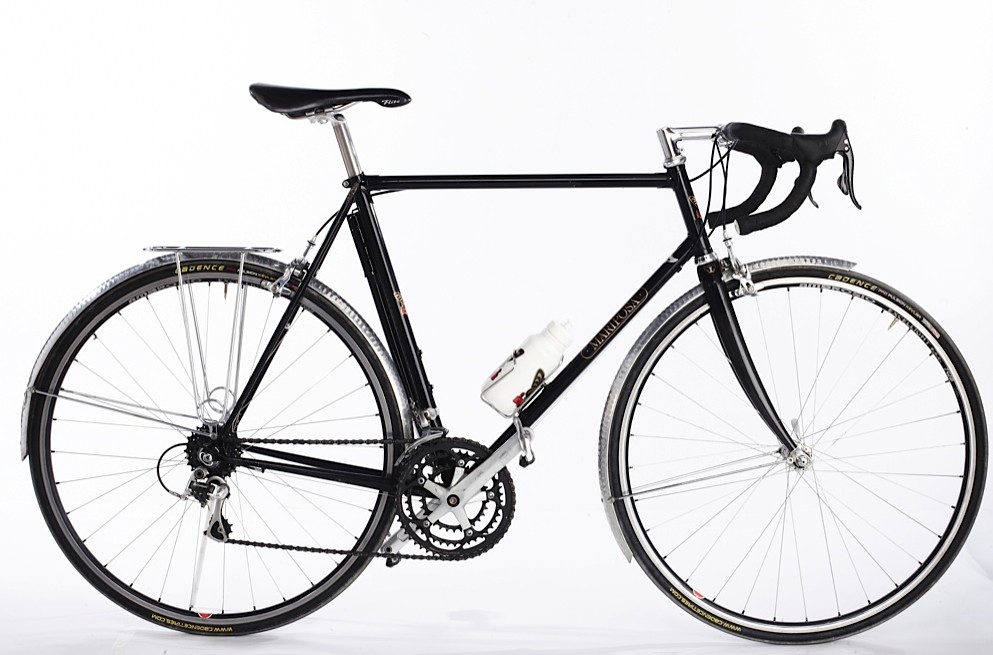 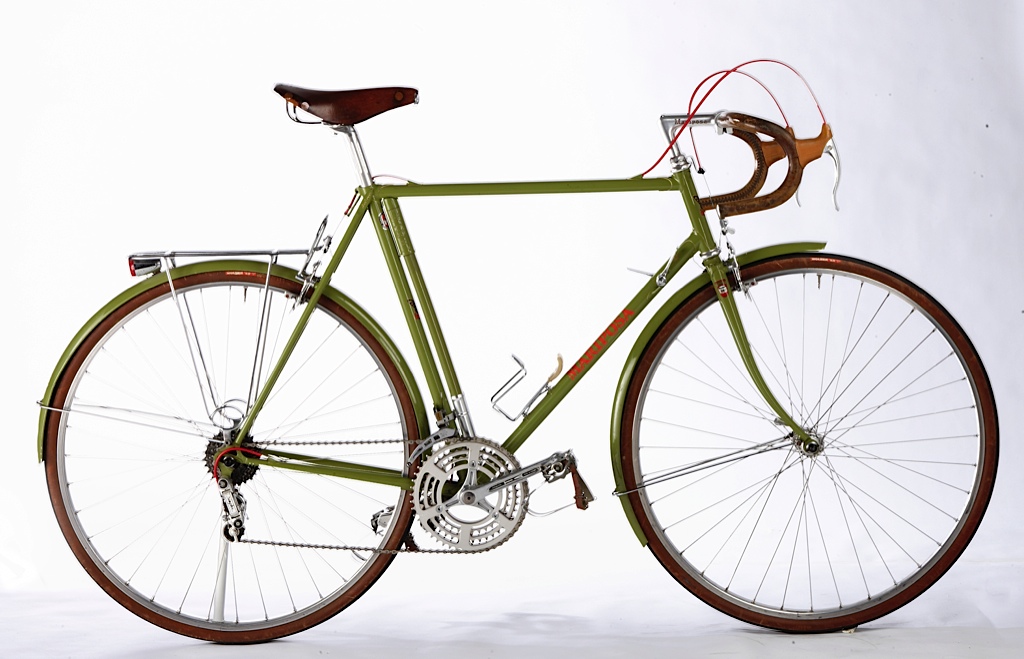 The Mariposa that I rode in 1981 was a bit heavier than the 2003 version but in many respects the bikes were very similar. In ’81 a triple crankset was fitted but with 52/48/34 rings and with six cogs on the back, 14-26. Mike and I both used Clement Campione del Mondo 28mm. tubular tires. We had only one puncture despite the rain and generally miserable conditions. Both our bikes were fitted with Sanyo bottom bracket generators, which were a boon as we started and finished each day in the dark.

The biggest difference between the ‘81 and ‘03 bikes is the shifting. In ’81 we had Simplex down tube retro-friction levers which, when combined with the Simplex SLJ derailleurs, gave the best shifting of any derailleurs available then. In ’03 I had Campagnolo Ergo levers and 10 cogs at the back. Shifting is better and far more convenient. No more sitting down when one needs to shift as it is possible to shift while standing on the pedals. The biggest difference of all though is the much more comfortable position made possible by the Ergo levers. I occasionally ride the old ’81 bike now and I can’t get over how uncomfortable the Mafac levers are in comparison. 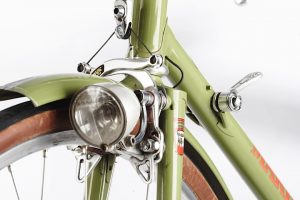 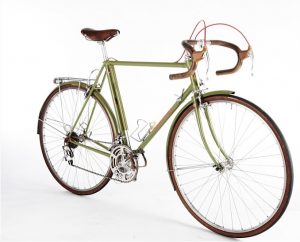 The ’81 bike had Mafac GT centre-pull brakes fitted and the ’03 has Tektro dual pivot. Braking performance is similar but the Mafacs had one disconcerting feature: the brake quick release mechanism would snap open when one braked really hard. I changed them for Mafac 2000s when I returned to Canada.

Of course in ’81 Mike and I used toe clips and straps. In ’03 I had Look clipless pedals. A bit of an improvement I suppose but no big deal really.

In ’81 Mike and I both used handlebar bags but I didn’t bother with one in ’03. One very interesting accessory that we both had fitted in ’81 was the Pacer 2000 computer. These were the first electronic “cyclometers”. The handlebar mounted display was about 6” x 4” in size and gave two functions: speed and distance. One upsetting feature was that they both reset to zero about half way into the ride. This was caused by some software function that I could never understand. I don’t bother with bike computers now. I don’t need to know how slow I am going.

When I finished the Raid in 2003 I didn’t say “never again”. It had been a very enjoyable four days. Will I do it again? I don’t know. I still consider riding in the mountains to be the most enjoyable and satisfying cycling there is. However there are many more mountain passes that I haven’t tried. I have ridden most of the Alpine passes, almost all the Pyrenean, many in the Rockies but none in the Dolomites. One ambition I have had since I was a kid is to ride the Stelvio and the Gavia. Hopefully that is on my schedule for 2017. 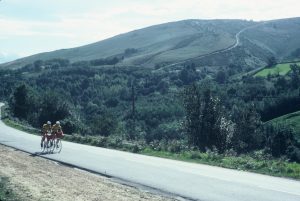 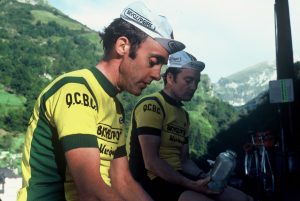 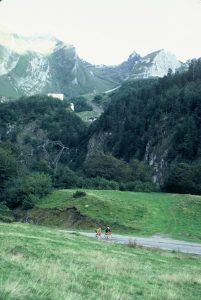 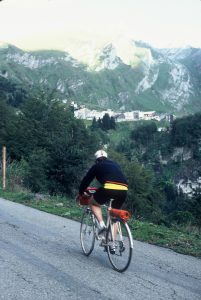 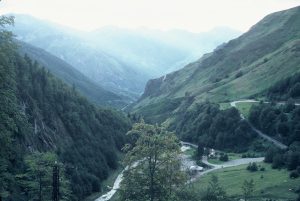 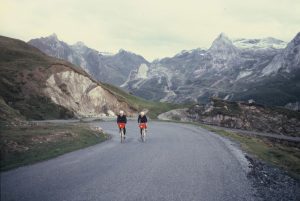 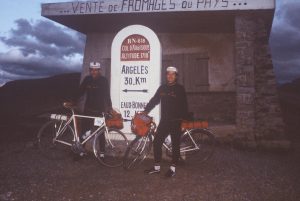 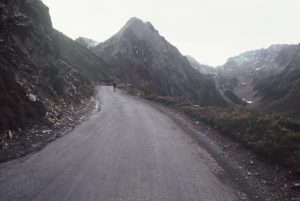 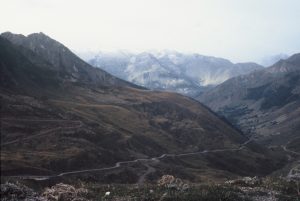 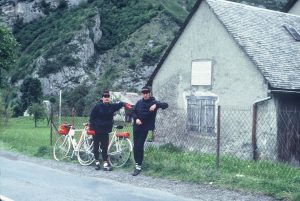 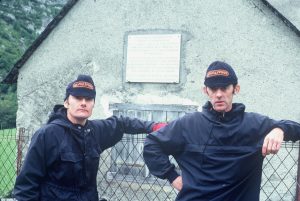 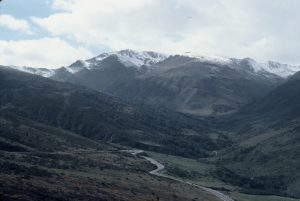 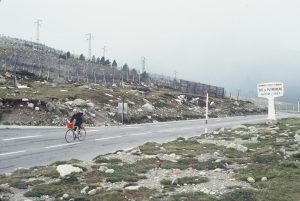 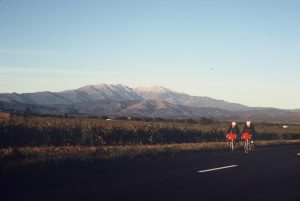 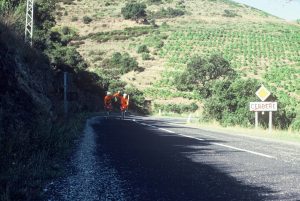 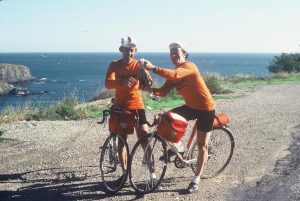 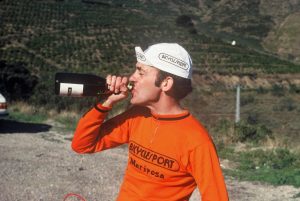 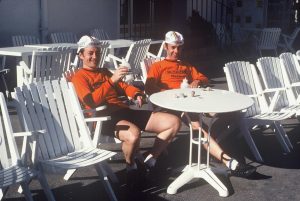 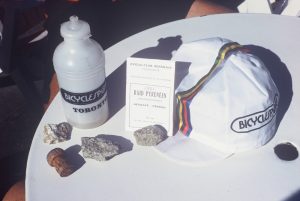