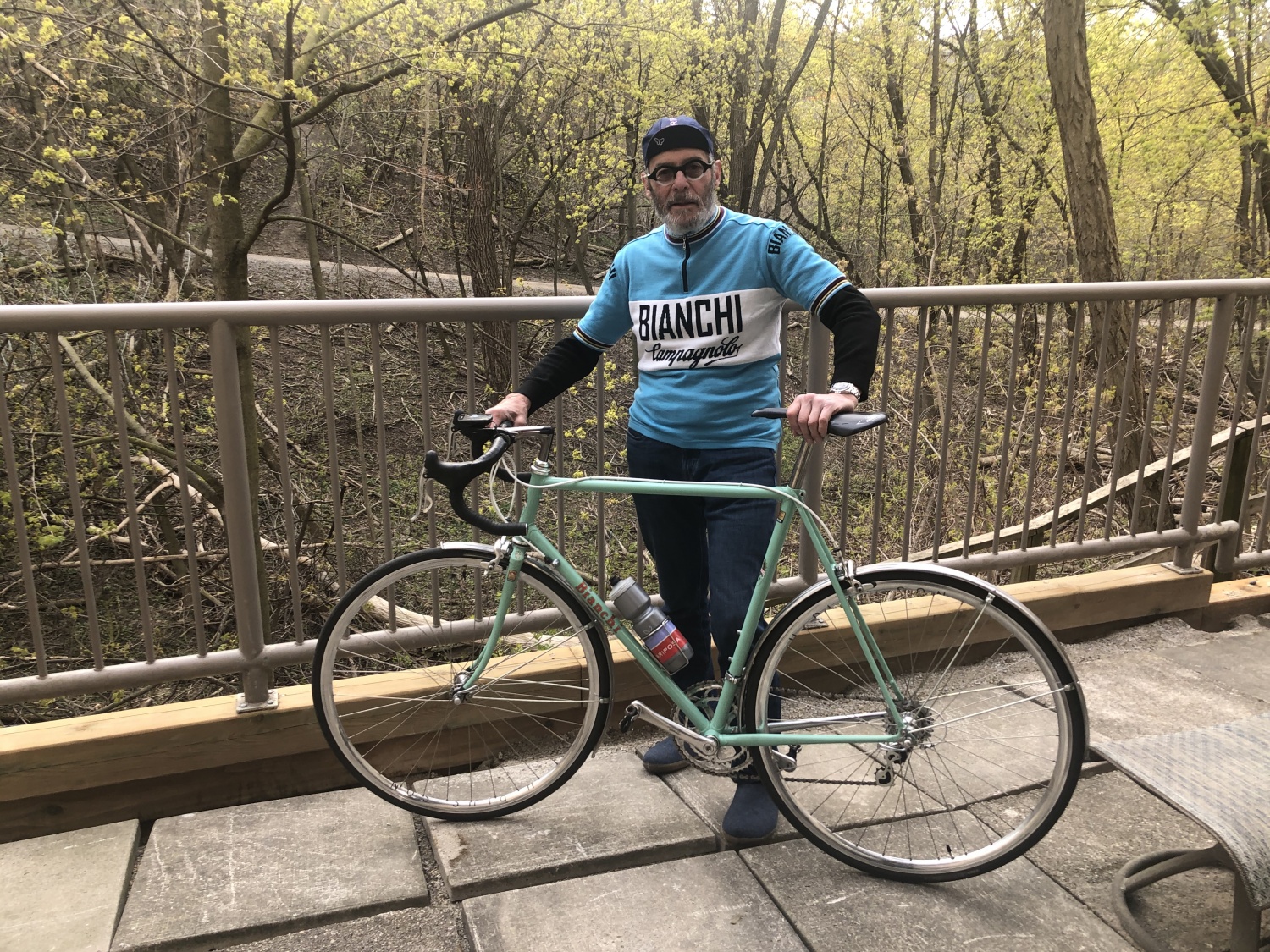 I decided to get a bike to go on my smart trainer when I take my 2017 Mariposa gravel bike off to ride it outside.  About 2008 or 2009, I bought a Marinoni turismo from Mike Barry after he had retired and was no longer building.  I used that bike as a commuter and really liked it.  It would have been good for the trainer, but I had given it to my grandson, Max.  Recently I dropped into Mariposa and Dede showed me a nice-looking Marinoni that a customer had turned in for sale on consignment.  It was circa 2000 and a great yellow colour, equipped with a Campagnolo 9-speed Record gruppo.  I was in the process of buying it, but when Michael was preparing the bike for me, he noticed that the chain stay was cracked, perhaps from the extra strain of the bike having been used on a trainer by the previous owner.

Michael offered me his dad’s old red Bianchi which had been his city bike.  He used it in Toronto until he built a Mariposa for himself.  As you can see in the photo, it saw a lot of use. 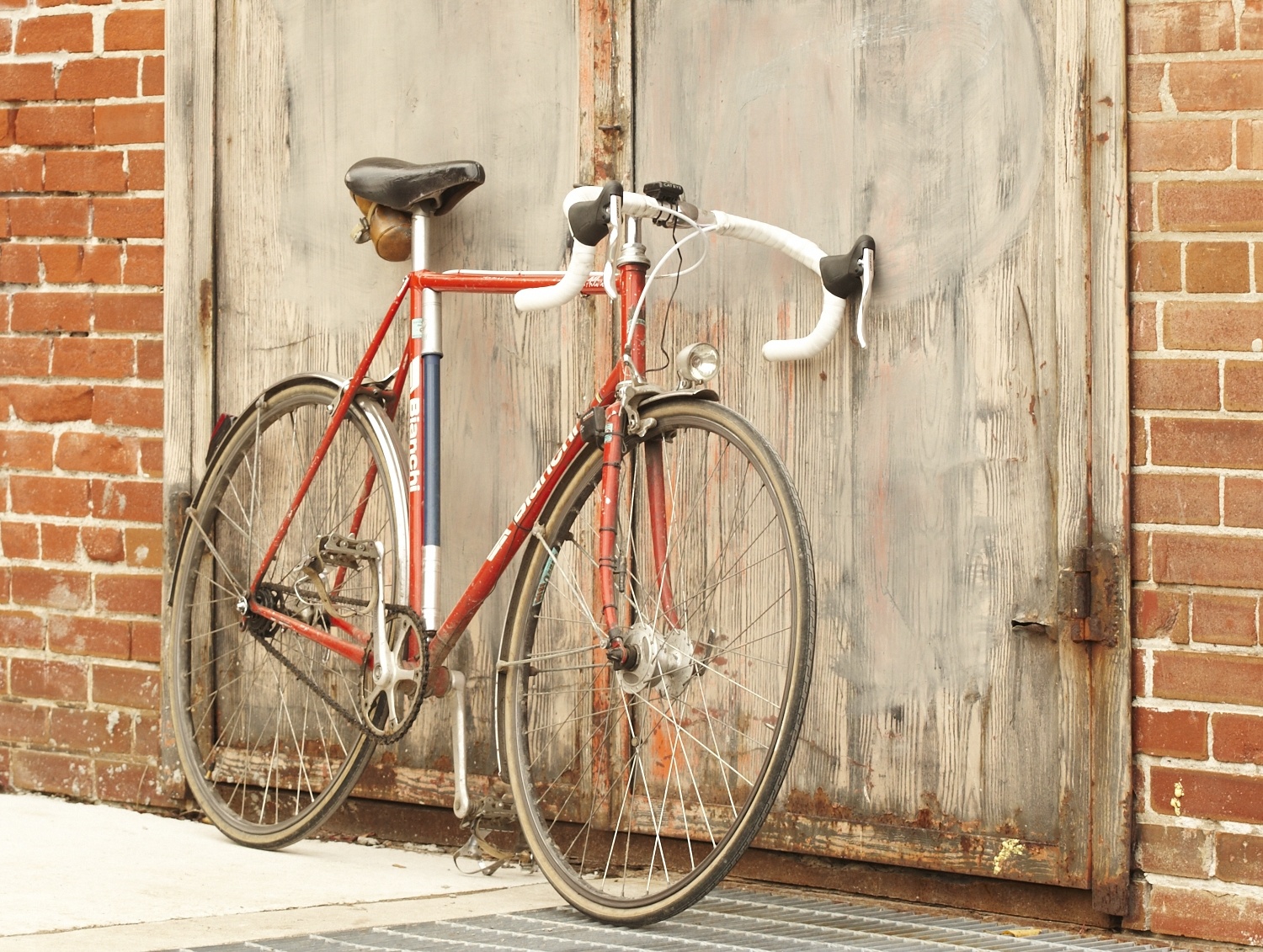 In his Dandyhorse article “Man of Steel”, Adam Hammond wrote, “Mike’s “hacker” locked outside: a red single freewheel Bianchi with fenders and a generator-powered headlight. (“I always meant to build myself a Mariposa hacker,” he told me later, “but never seemed to find the time.”).”  Looking at the photo you can see the electrical system and the fenders.  Mike and I were in agreement that the default for bikes is fenders, or mudguards as he called them.  Michael told me that when Bianchi Canada went bankrupt, Mike bought up all their old stock and sold it in the Bicycle Specialties shop and by mail order. Mike Sr. and Michael rode Bianchi bicycles until Mike had time to produce Mariposas for themselves.  Looking at the red Bianchi picture you can just make out “Nuovo Alloro” on the top tube. In a recent photo there is a label on the downtube identifying the frame as a 1987 Campione del Mondo. 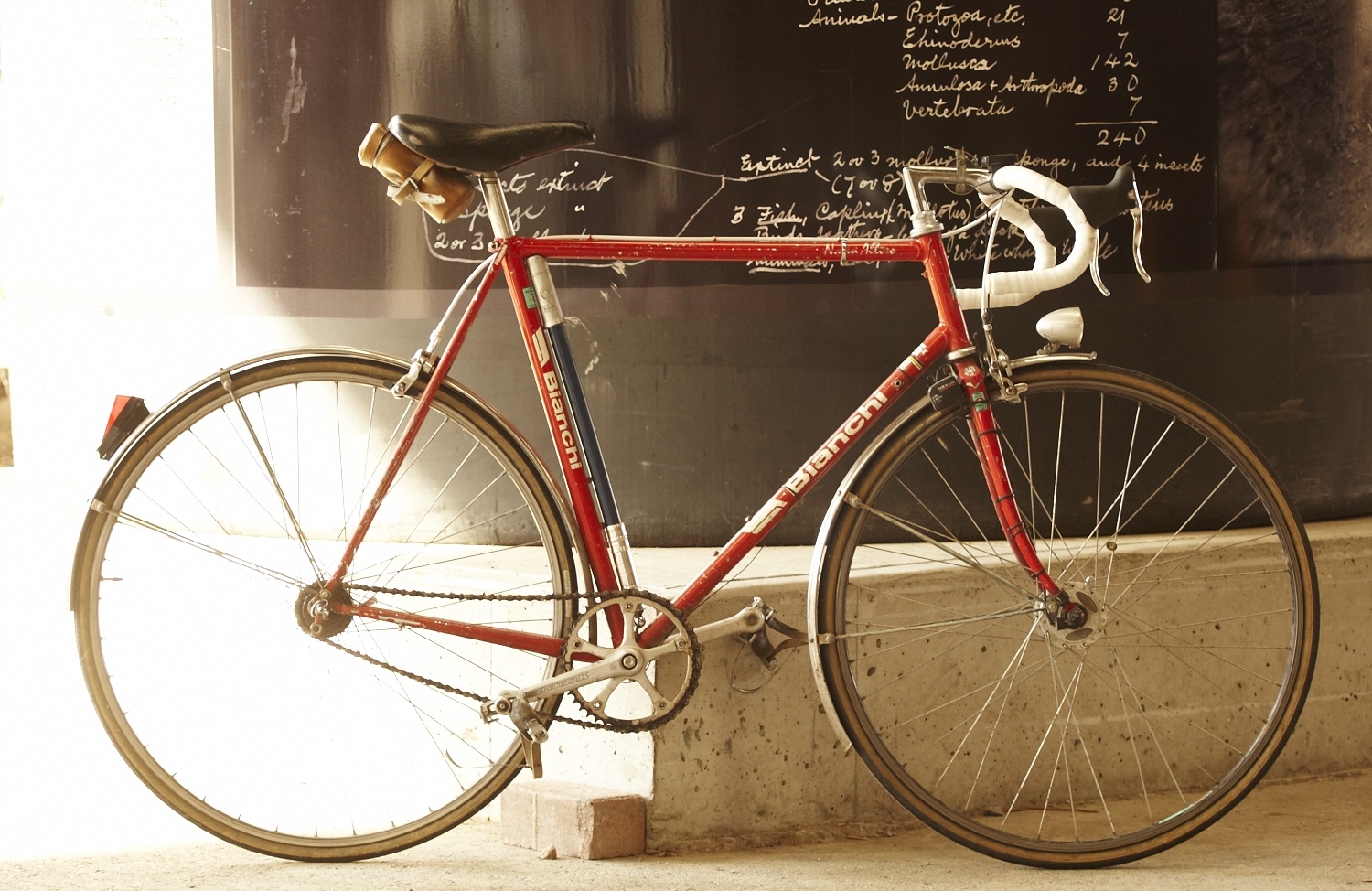 I was a little hesitant to ask about painting the frame Celeste green, fearing that it might be lèse-majesté, but Michael was enthusiastic and told me that Mike had fixed up an old Bianchi frame similar to this one and put Chorus equipment on it.  It looked good.  The bike was kept in Girona to use when he visited Michael and Dede.  The next photo shows Peter Morse putting the headbadge on this painted frame.  We chose old style decals from the Fausto Coppi era and installed 9 speed Record equipment. 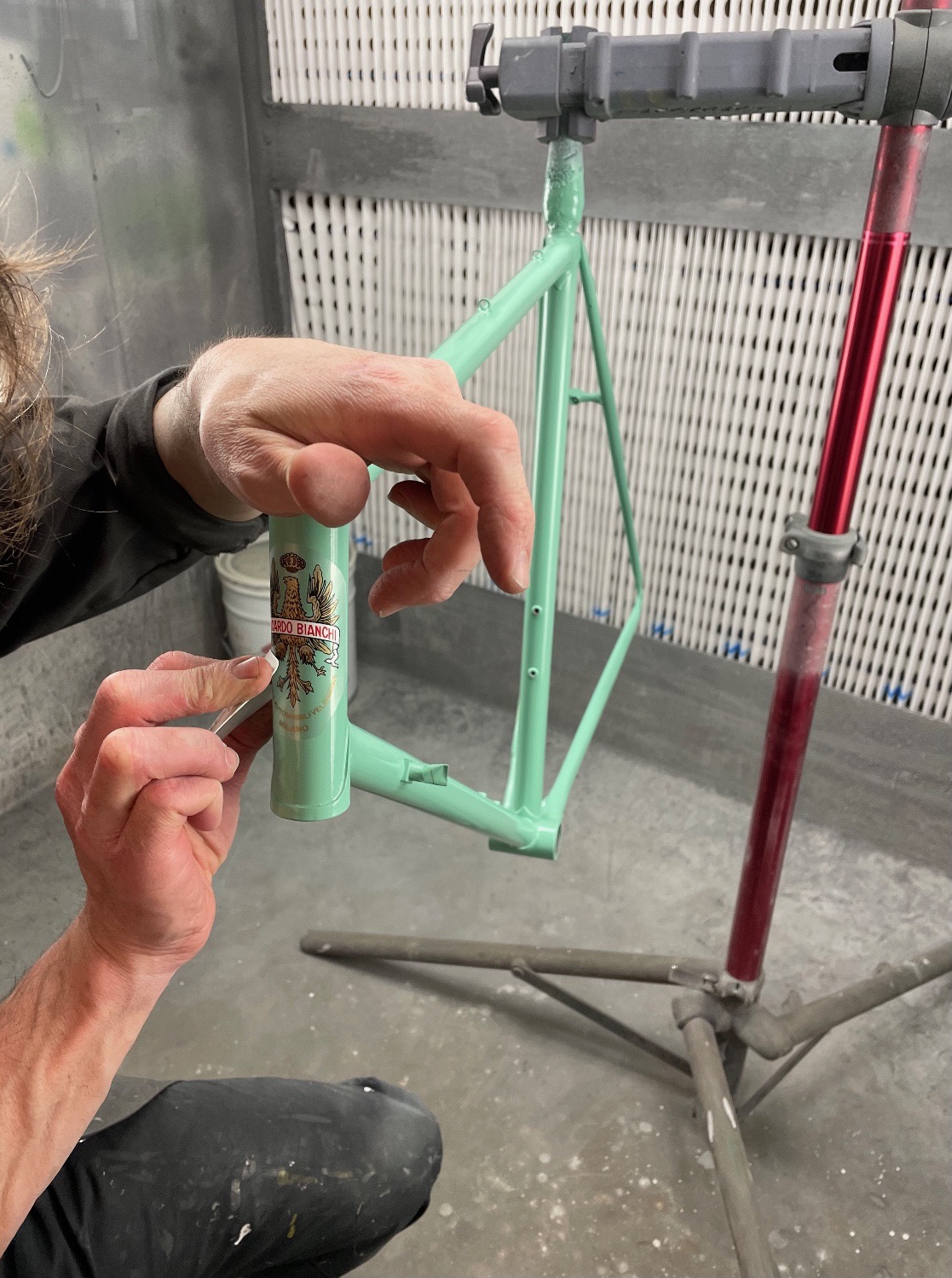 To my delight (and relief) the bike is a joy to ride.  Michael set up the Bianchi so that my riding position is the same as on the Mariposa.  Not surprisingly, the two lugged steel frames feel very similar.  The bike is lighter than I expected and very responsive.  The Record derailleur shifts smoothly and feels direct.  I am not sure what I was thinking, but I dithered a bit before deciding on fenders (oops,mudguards).  I can’t wait to ride through a puddle. 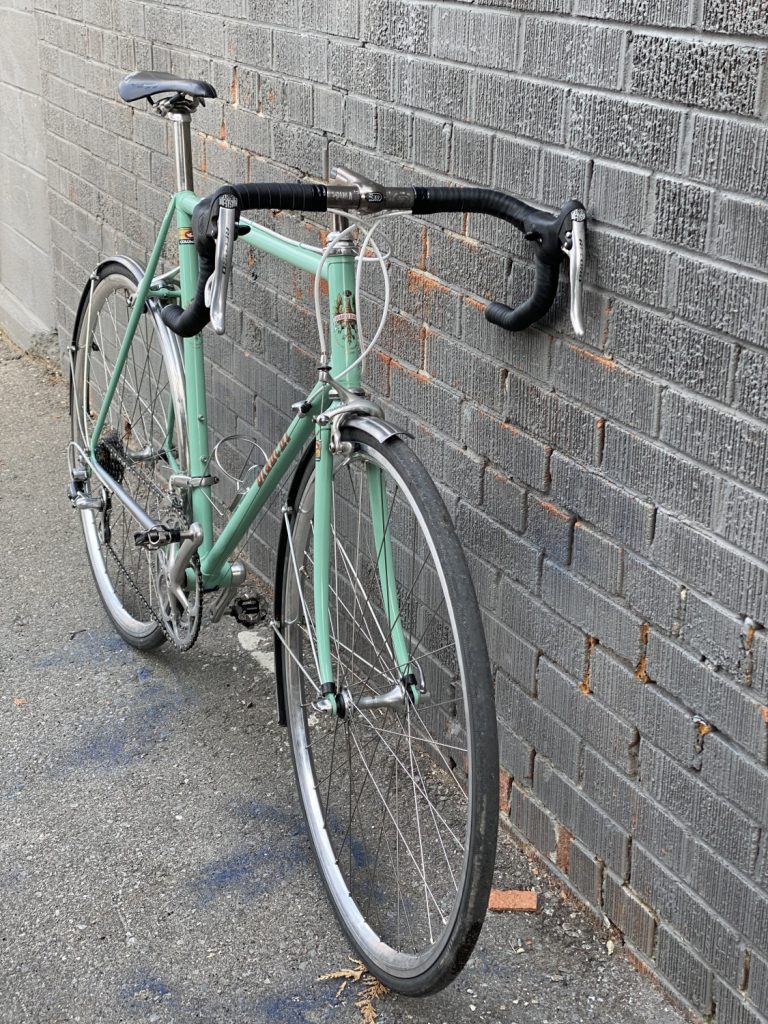 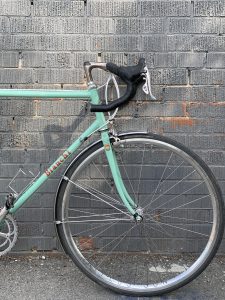 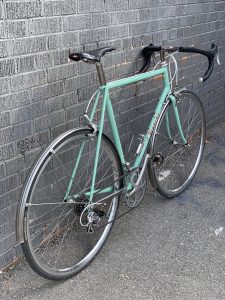 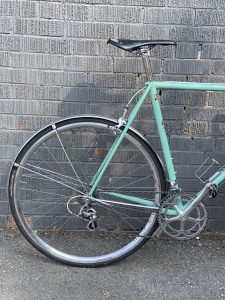 2 thoughts on “Restoration Feature: Provenance Of A New/Old Bianchi”