Bikepacking Feature: Dreams of Living on the Bike 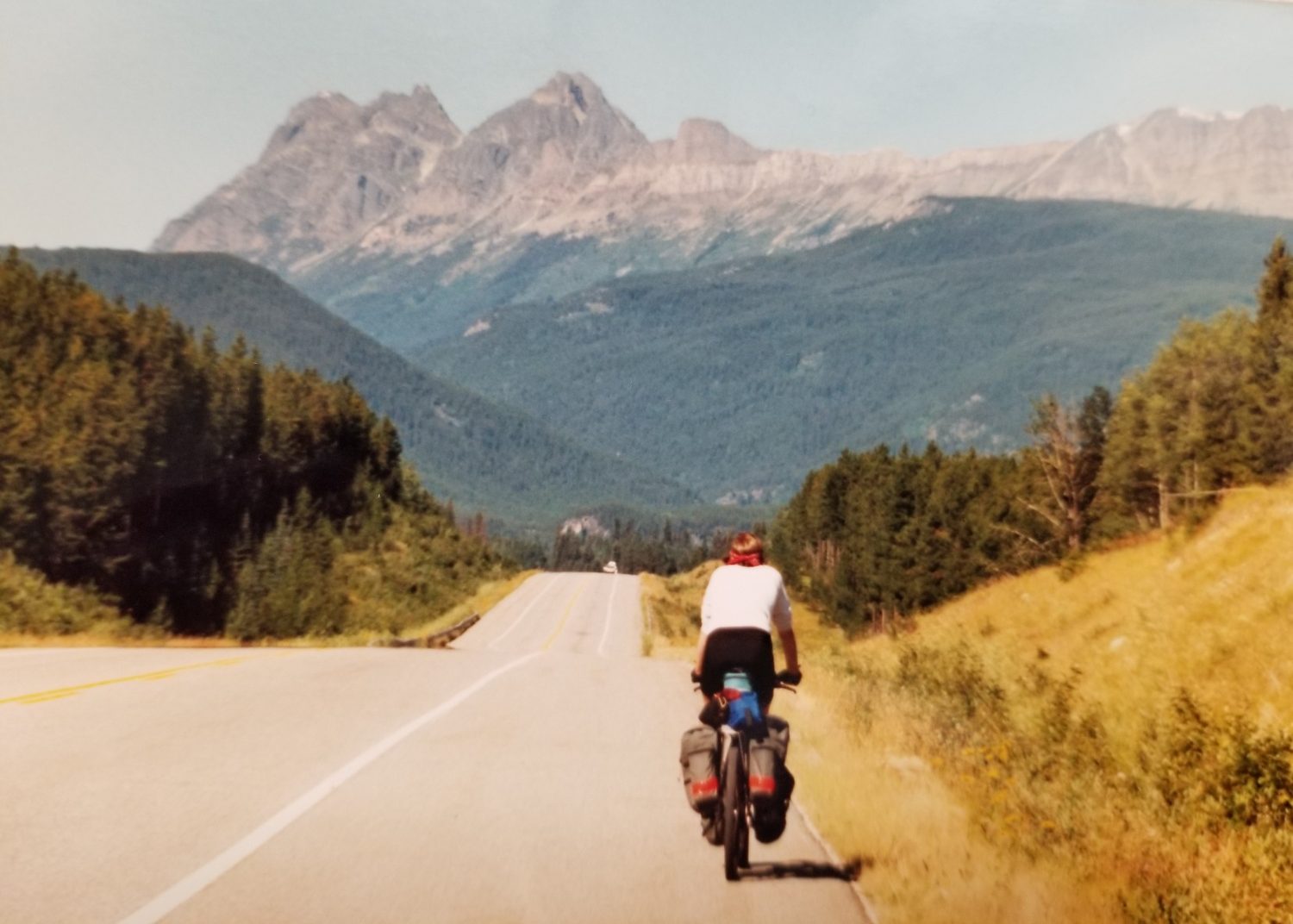 It was 1988:  Wayne Gretzky had been traded to the LA Kings. We had travelled to Edmonton, the home of the Stanley Cup winning Oilers. The city was wet with tears as fans wept alongside their star at his news conference. Although significant history was in the making, the attention of both my friend and I was elsewhere. Edmonton was not our true destination; it was a place to connect with my grandmother and uncle and a perfect starting point for a month on our bikes, travelling and camping through Canadian National Parks. 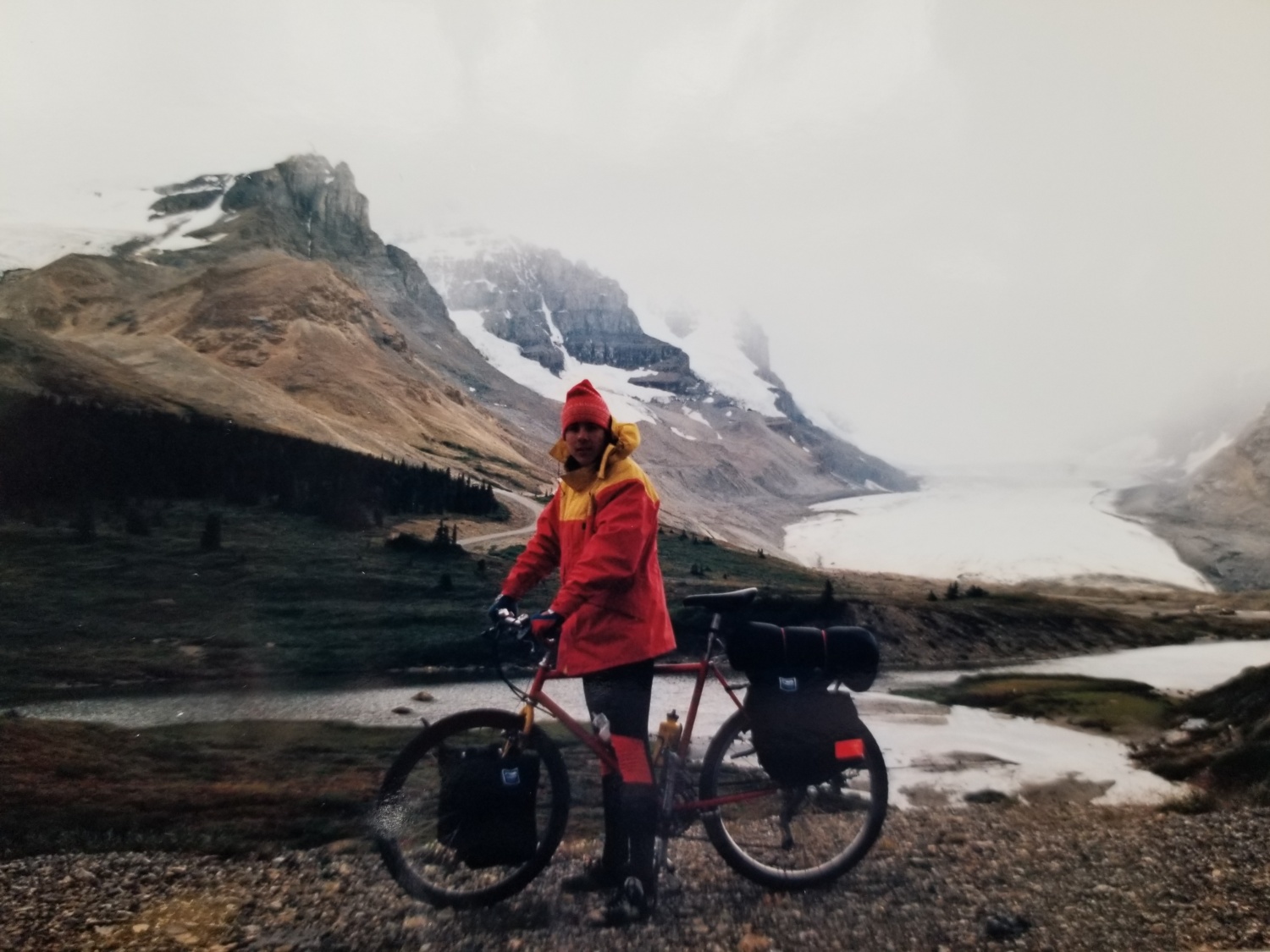 Mountain bike design was just finding its stride at this time. Drivetrains were up to 18 speeds:  3 chainrings up front and 6 cogs on the rear. This set up offered more than enough of a gear range to climb steep hills on or off-road. Index shifting was a new and cool feature. 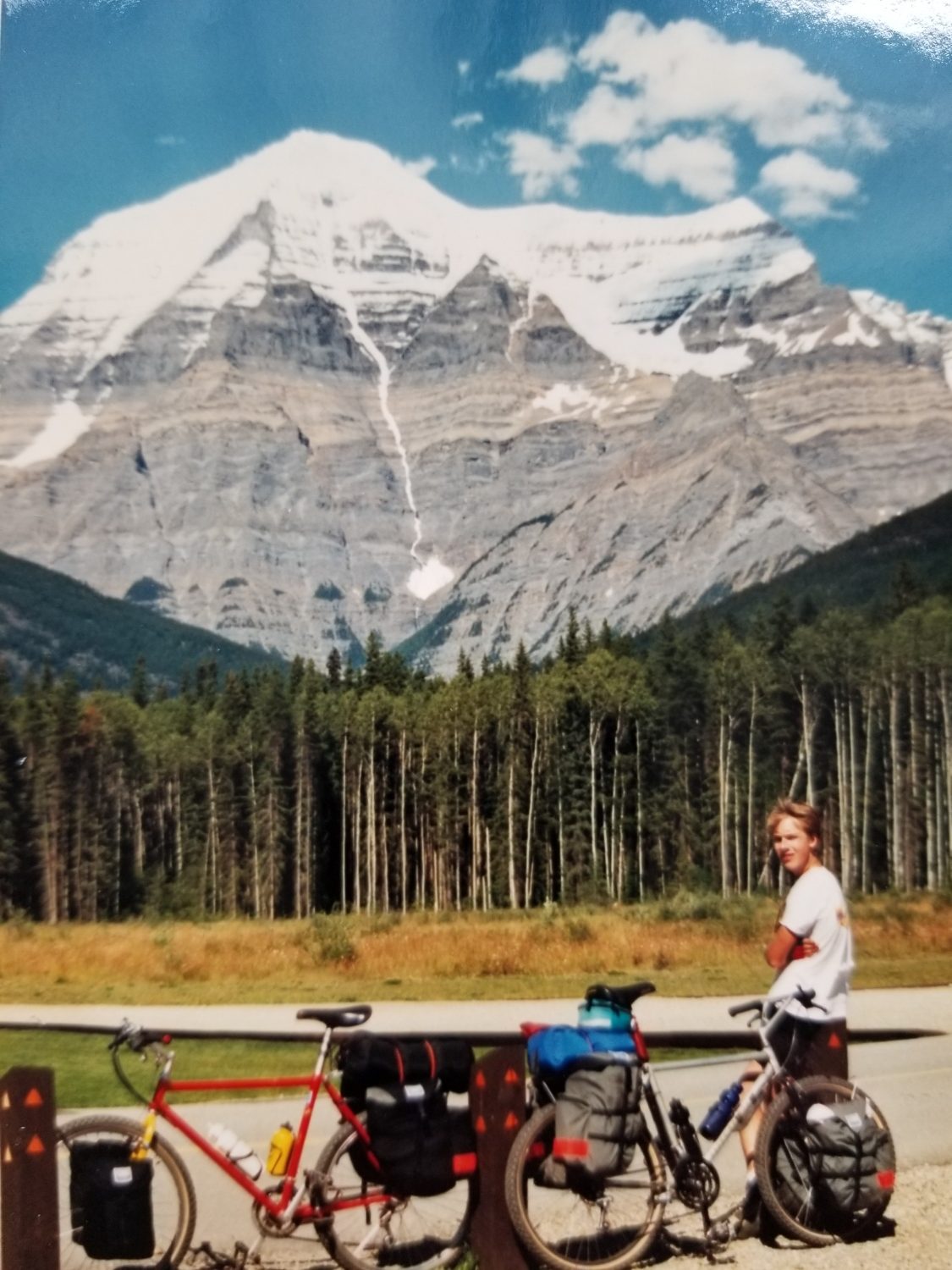 We wanted to take enough gear to stay self-sufficient, including a tent, sleeping bags, a stove and warm clothing. We purchased food along the way, always making sure we had enough to last since some grocery stores were a few days ride apart. We also had an SLR camera, which was a lot bigger and heavier than today’s digital option. We used panniers on rear racks and low-rider front racks, always loading the front panniers with more weight to keep the bikes stable. The heavy bikes sometimes felt like trucks, but were quite manageable for our young and enthusiastic legs.

After a brief visit with my family, we started our trip with a ride to the Edmonton train station. The baggage handler took our bikes and we enjoyed the train ride to Jasper. Conversation sparked with a couple of Edmontonians that were doing the same sort of bike trip as we were. Coincidentally, one of the guys worked for my uncle back in Edmonton. Nice chats of bikes, routes and adventures ensued. It is indeed a small world. 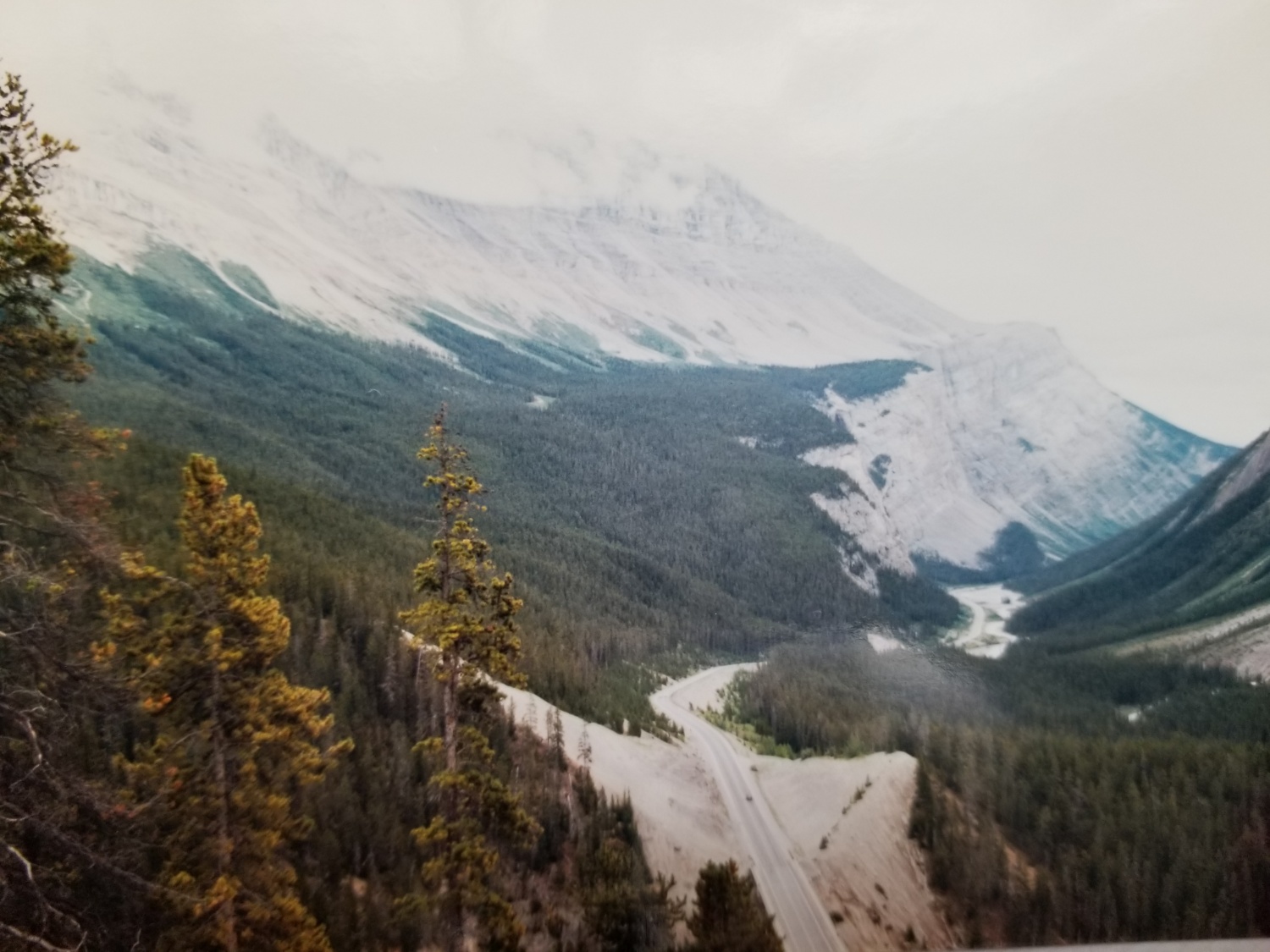 In Jasper, we were on the road to our first campsite and we felt free!  Every pedal stroke was a labour of love. We set up camp that afternoon, inspired and unstoppable.  Then the rain came – three whole days of it. Since we weren’t on a schedule and free from any pre-arranged bookings, we decided that the road was too wet to be fun. We took our panniers off and did some trail riding instead. The trails around Jasper are a pleasure to ride and the mountains are beautiful. 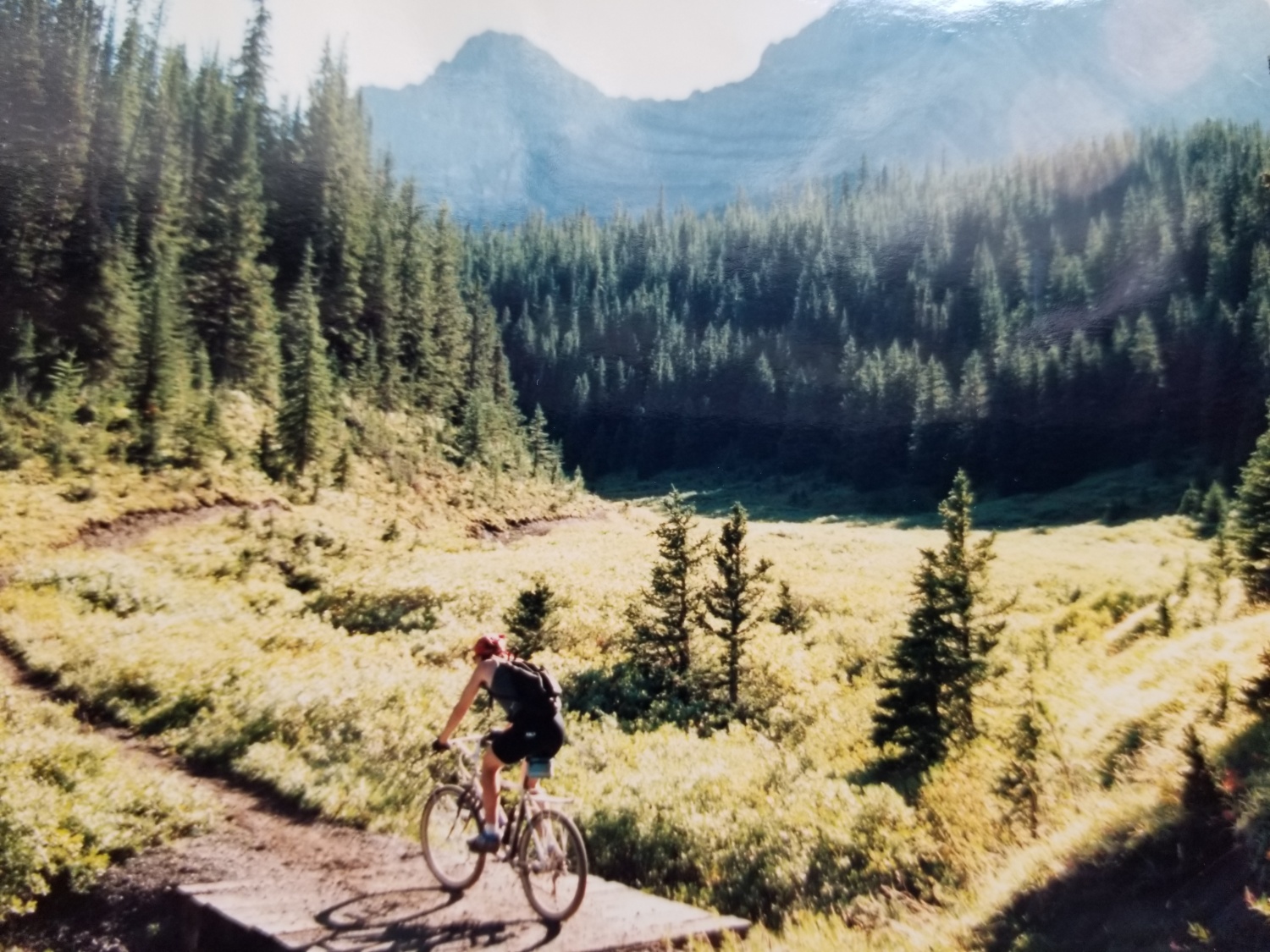 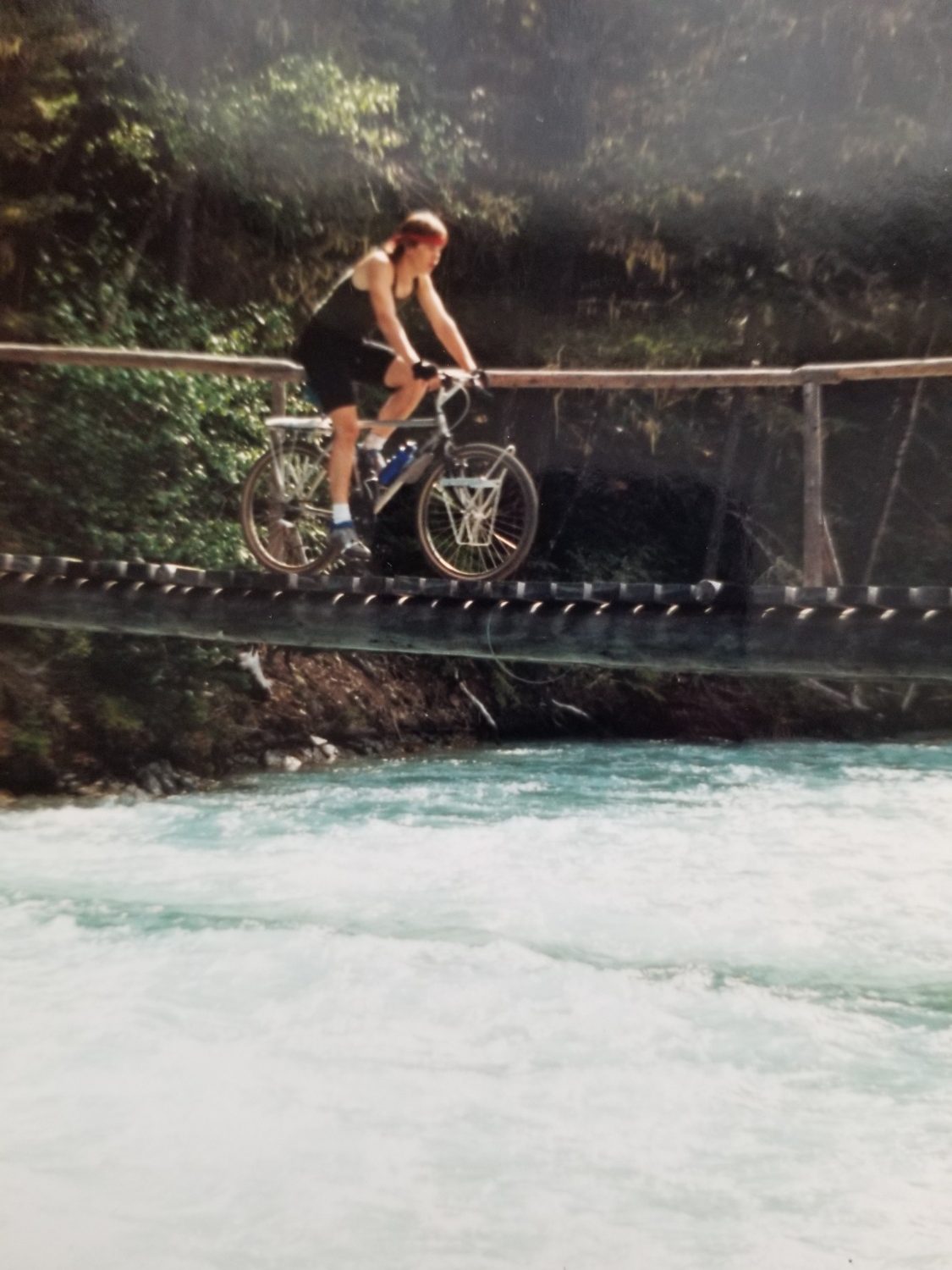 On a trail behind Mount Robson

Mountain biking allows us to experience nature and the outdoors in an efficient way:  although hiking is wonderful, mountain biking gains further distance for the effort.  During the 4 weeks of our trip, we did some big days on the road and intentionally camped at night near selected trailheads. We unloaded the bikes in the morning and hit the single track. Mt Robson in British Columbia was a highlight. We anticipated it for miles, checking the map and its coordinates.  As the highest peak in the Canadian Rockies, it is certainly distinguishable! We rounded the corner and there it was: clear of clouds and in all its glory. We couldn’t resist its trail experience and rode as far as we were able, hiking the remainder of the way up to the glacier. Hiking the entire route would have taken three days, but with the bikes we were back at our camp for dinner. 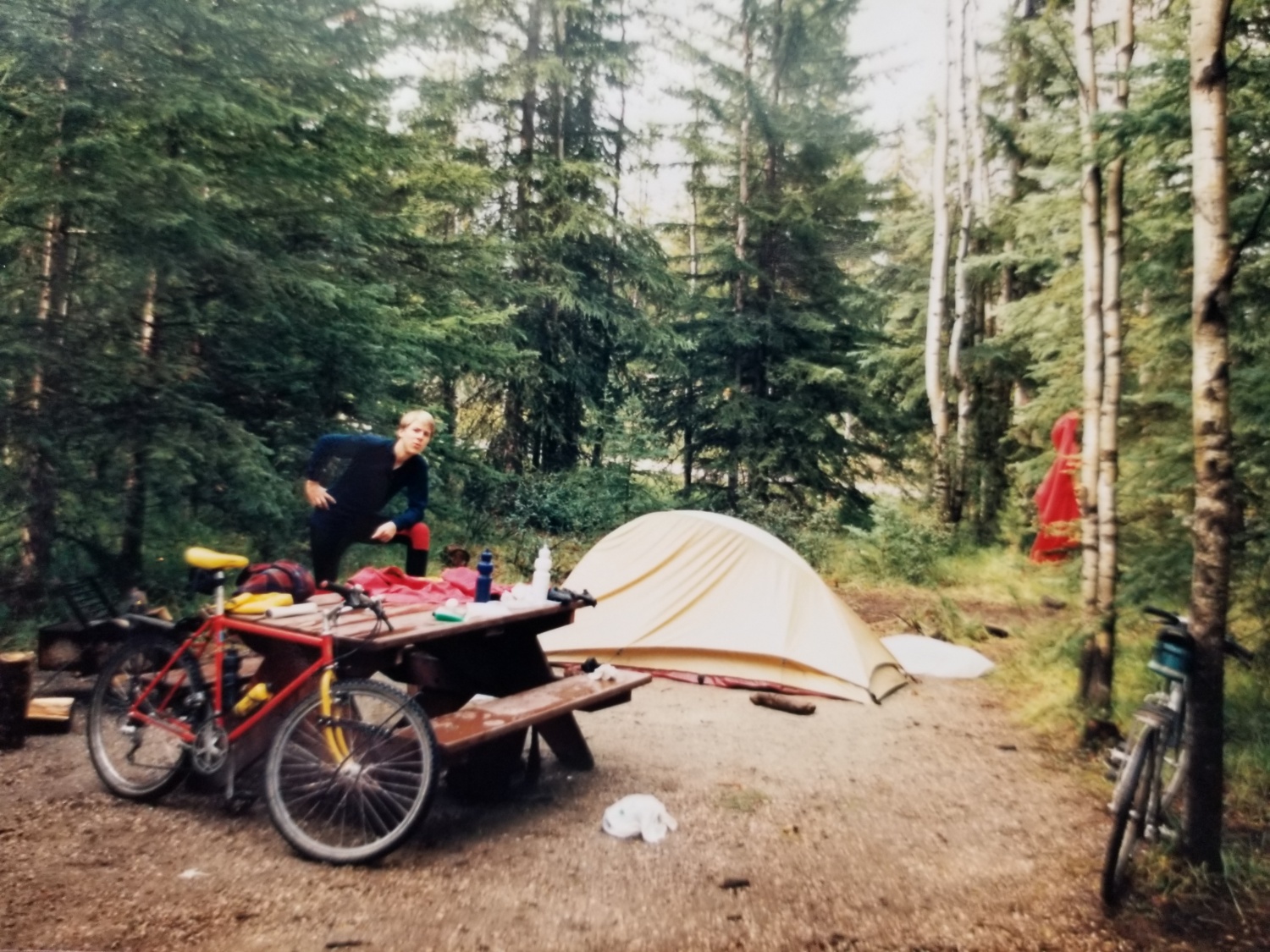 We met and became familiar with many kind people on the way to Banff. A church youth group was riding the same route as we were. It was great to see over a hundred kids riding bikes. Most were not avid riders, but had the vehicular support to ensure a good, fun summer tour. We’d wave them off in the morning and catch up with them later on the road, encouraging them to the next campsite. They invited us for dinner every night. There were many RV enthusiasts on our route, always eager to chat and hear details of our adventure. They often offered to feed us as well! 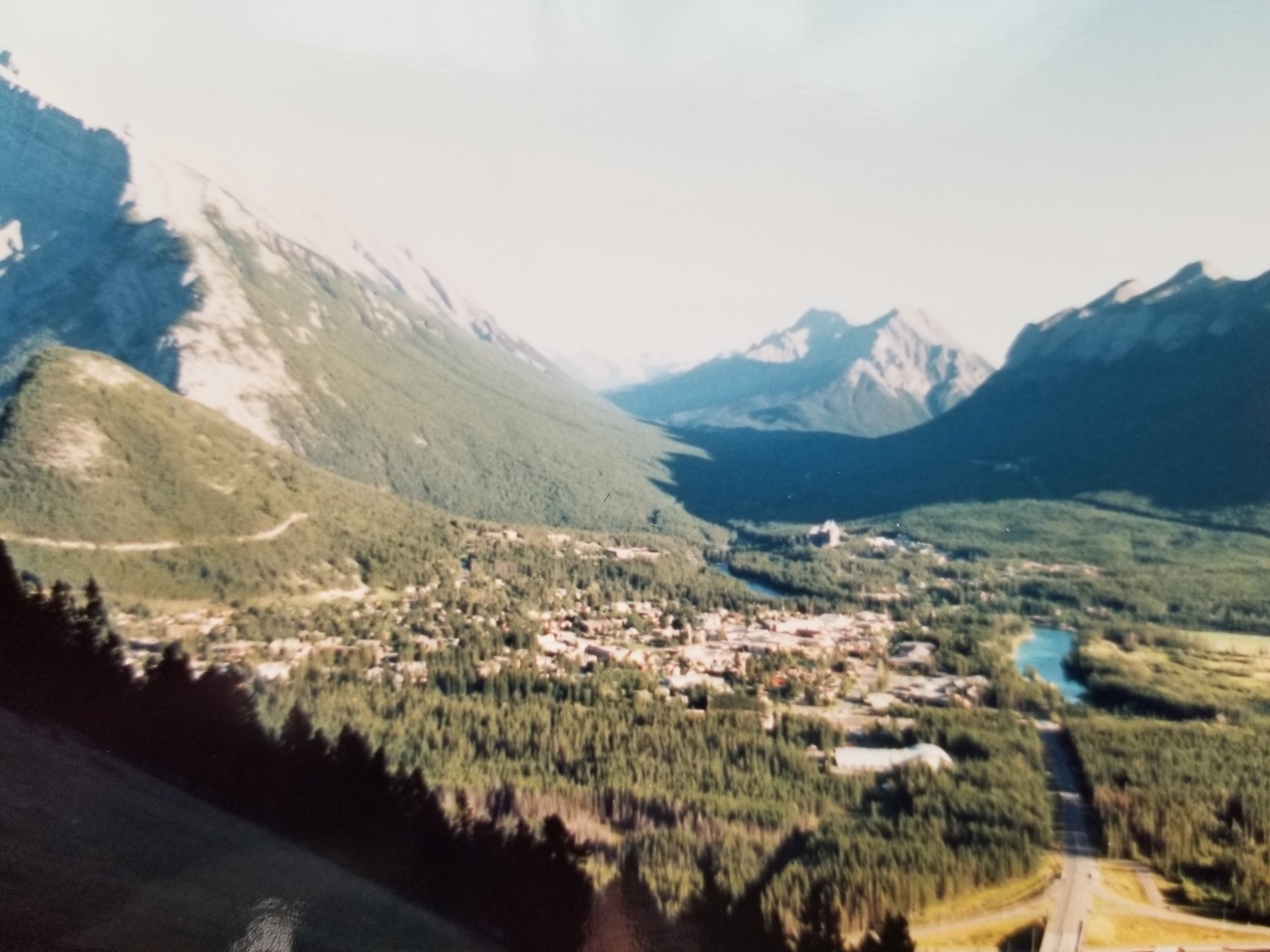 After trail riding, hiking and living it up in Banff, we headed to Calgary for a few nights before our departure back home to Toronto.  The feeling of freedom is ignited when I think back on this time and on other trips I have taken. During these days of lockdowns and restrictions, the idea of exploring the trails and living an adventure by bike offers reprieve, even if the adventure is just a ride to the local cafe for a curbside pick up. 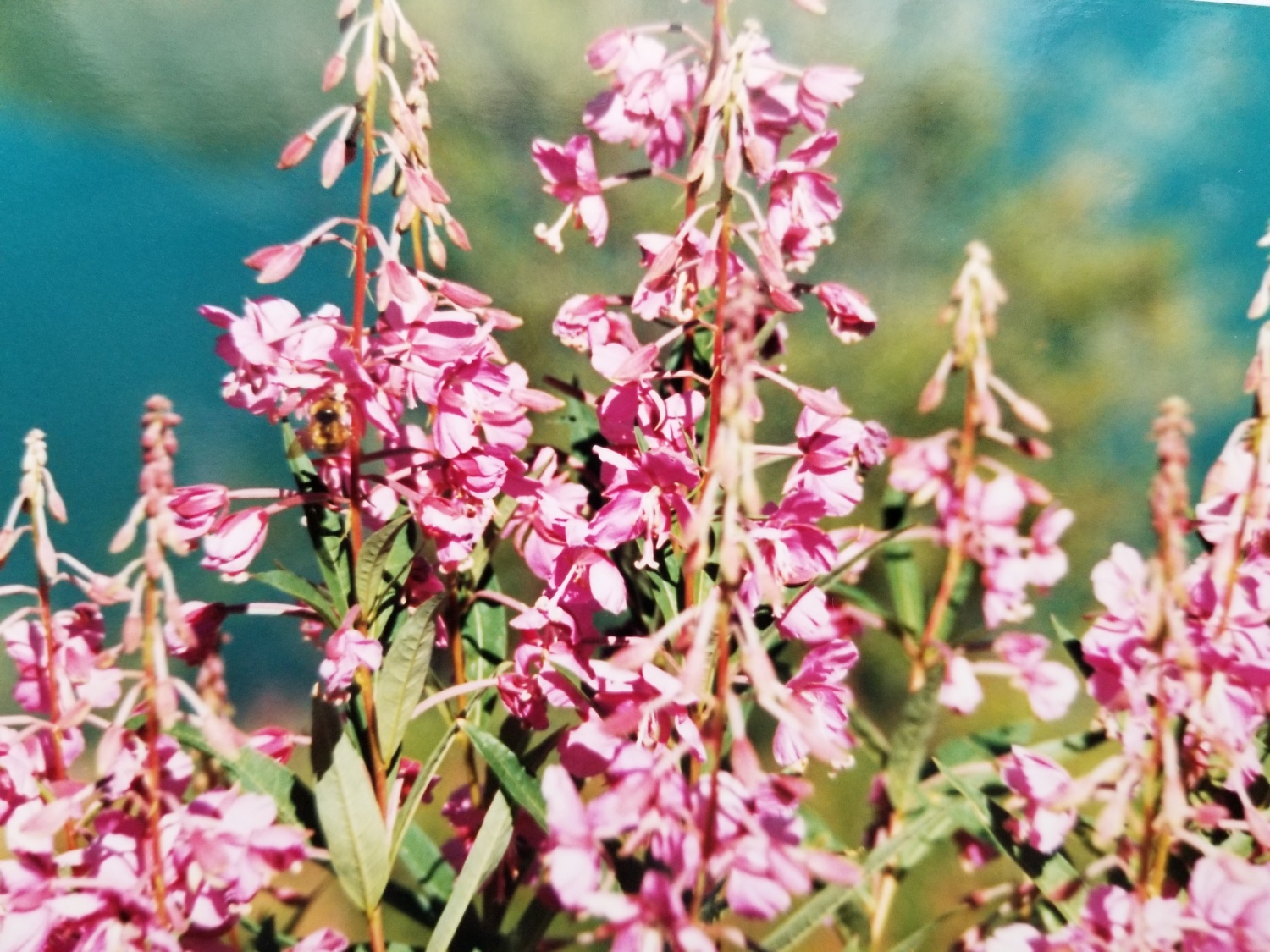 Mountain flowers en route that bloom from the bottom up.  When the top flowers bloom, summer is ending. This photo was taken in early August and as you can see the top flowers have not yet bloomed.

4 thoughts on “Bikepacking Feature: Dreams of Living on the Bike”