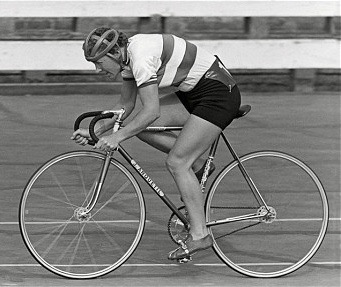 Recently Kensington Communications approached me to supply a bike for a film they were making on Beryl Burton. The film was to compare the present World Pursuit Champion, Sarah Hammer with Beryl. Both these riders have five World Championship pursuit titles to their name and the World Record for 3000 metres. The CBC has commissioned the film as part of a series comparing today’s athletes and their equipment with those of the past. After searching for and studying photos of Beryl riding on the track I was able to put together a bike very similar to the one used by her to set the World 3000 metres record in 1964. I was also able to supply shoes and helmet similar to Beryl’s. The CBC compared the two riders’ bikes, clothing, track surfaces, bike and rider aerodynamics and training. I have not seen the results of the tests and will not until the film is shown but I have every reason to suspect that it will be very interesting. Sarah Hammer rode “Beryl’s” bike on a track similar to the Nottingham, UK track used by Beryl to set the record in ’64 and then in the wind tunnel in Los Angeles. She then did the same on the bike she used to set the present record. Comparisons were calculated using a power meter. 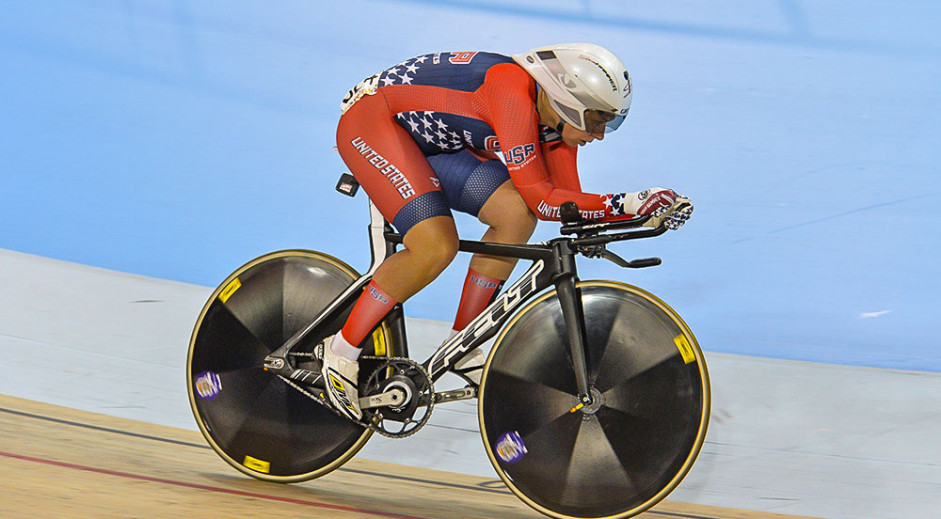 In my search for information on Beryl I came to realize how incredible she was. I was racing in the UK during Beryl’s reign and didn’t, like so many others during that period, appreciate how good she was. Or maybe we did realize but her incredible performances came with such regularity that we took it all for granted. She certainly didn’t receive the accolades that she deserved.

Equipment and track surfaces in Beryl’s time and those available to riders today are vastly different. There were no ‘aero ‘bars’, skin suits, aero helmets, clipless pedals or aerodynamic bikes. The outdoor track in Nottingham had a rough concrete surface while Sarah rode on a beautifully smooth wooden indoor velodrome.

Sarah followed a strict, coach dictated, training schedule whereas Beryl just rode an enormous number of miles in all weathers encouraged by her husband Charlie.
Sarah is a professional who dedicates her life to cycling. Beryl was an amateur, with virtually no financial support, had a full time job and was a housewife raising a daughter.

Sarah is without any doubt an excellent track racer. Beryl rode the track but also raced at all distances on the road. She won events and set records at all distance from 3 km to 12 hours over a period of 25 years. Probably her most well known performance was setting the British 12 hour time trial record of 277.25 miles (443.6 km). During the event she caught and dropped Mike McNamara who finished in a new men’s record record distance of 276.52 (442.43 km).

In my opinion there is no doubt that Beryl was one of the Worlds finest athletes, male or female ever. What a pity that she is almost completely forgotten. I’d encourage anyone interested to Google ‘Beryl Burton’ for more details on this incredible woman.

Beryl Burton died of a heart attack in 1996 while out on her bike delivering invitations to her upcoming 59th birthday.