GREG CURNOE AND HIS MARIPOSAS 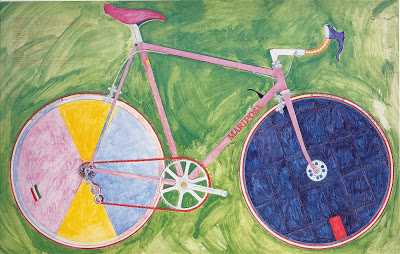 It was in 1974 that the celebrated artist from London, Ontario, Greg Curnoe came to our store, Bicyclesport in downtown Toronto. He was obviously very interested in cycling and very knowledgeable about bikes. Greg was also an avid nationalist and he was delighted to discover that we were building custom bike frames at our King Street store. For some time he had been looking for a Canadian built racing bike. Since the demise of CCM’s custom frame building shop where they had produced the Flyer model there had been no one else in Canada building custom frames. Greg immediately ordered a Mariposa.

Before coming to Bicyclesport Greg had owned a couple of racing bikes; a Spanish Zeus and a French Gitane. Both of these bikes are featured in his artwork. There are two paintings of the Zeus, both in acrylic on plywood with the bikes profile cut out. There is a head-on painting and a side view. Both paintings are designed to stand against a wall as one would lean a bike. Both are now in the Art gallery of Ontario,

The painting of the Gitane is a very carefully detailed watercolour with a full component list penciled in at the side. Greg was very interested in detail and his artwork often listed all the characteristics of his subject.

When his new Mariposa was finished he came to the shop with a folder full of Letraset, a form of letter decals. Before he even sat on the bike he printed on both sides of the top tube, in English on one side and French the other; “Close the 49th parallel etc”. 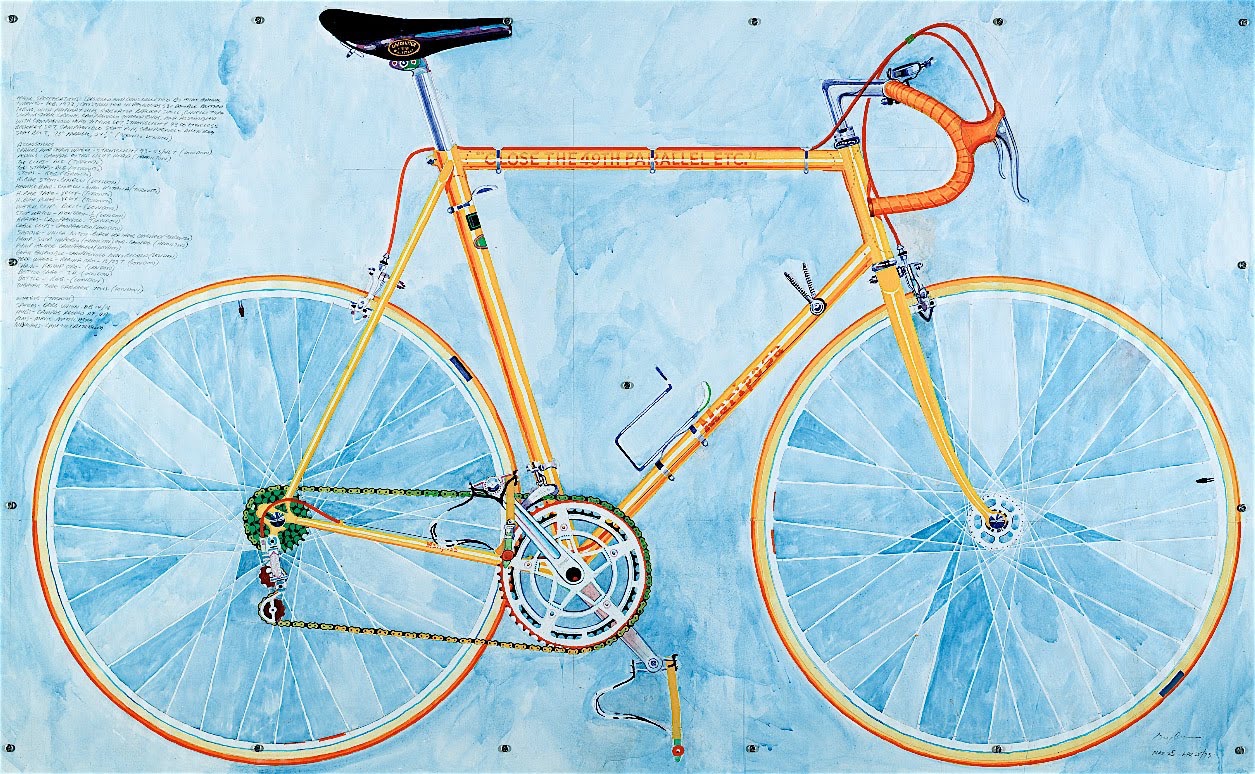 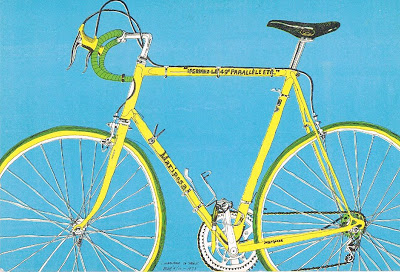 Greg’s sketch of the same bike

Greg claimed that he was in no way anti American but very pro Canadian. This sentiment was exemplified when he was commissioned to paint a mural at the Montreal Airport for Expo ’76. The mural contained depictions that many construed were anti American. Greg argued that they were just pro Canadian but the authorities disagreed and the complete mural was removed to prevent the possibility of offending American visitors.

Greg raced on his Mariposa for a couple of years before he was involved in an accident which bent the frame’s top and down tube. He returned it to us at Bicyclesport for repair and at the same time ordered another Mariposa, this time a dedicated time trial bike. 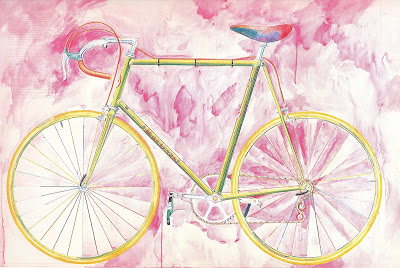 Greg’s watercolour of his Mariposa TT. 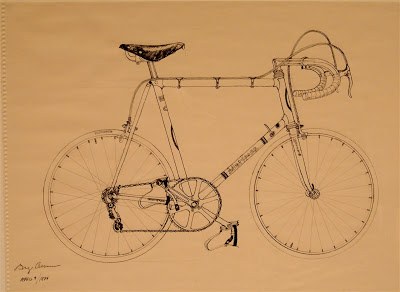 A pen and ink sketch of the same bike

He was quite unlucky with his Mariposas. The second one was also damaged in an accident involving a car, again bending both top and down tubes. Fortunately this accident occurred after Greg had painted what has become his most famous bicycle painting, a full size watercolour titled “Mariposa T.T.” This painting was then printed as a limited edition on Plexiglas. The original watercolour is now in the Art gallery of Ontario and a Plexiglas print is in the National Gallery in Ottawa. 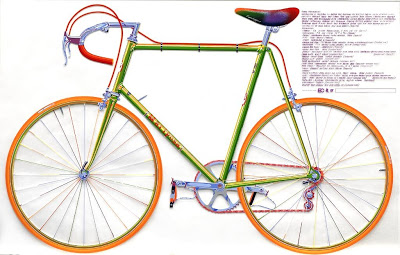 The bike was again returned to us for repair. At that time, around 1981, low-profile time trial bikes were becoming popular. It was agreed that if we were changing the top and down tubes anyway we may as well convert the bike into a low profile style machine. The frame was altered and “cow-horn” handlebars were fitted. The new paint scheme was pink rather than the original bright green. Greg painted another watercolour of it titled “Mariposa Low Profile”. 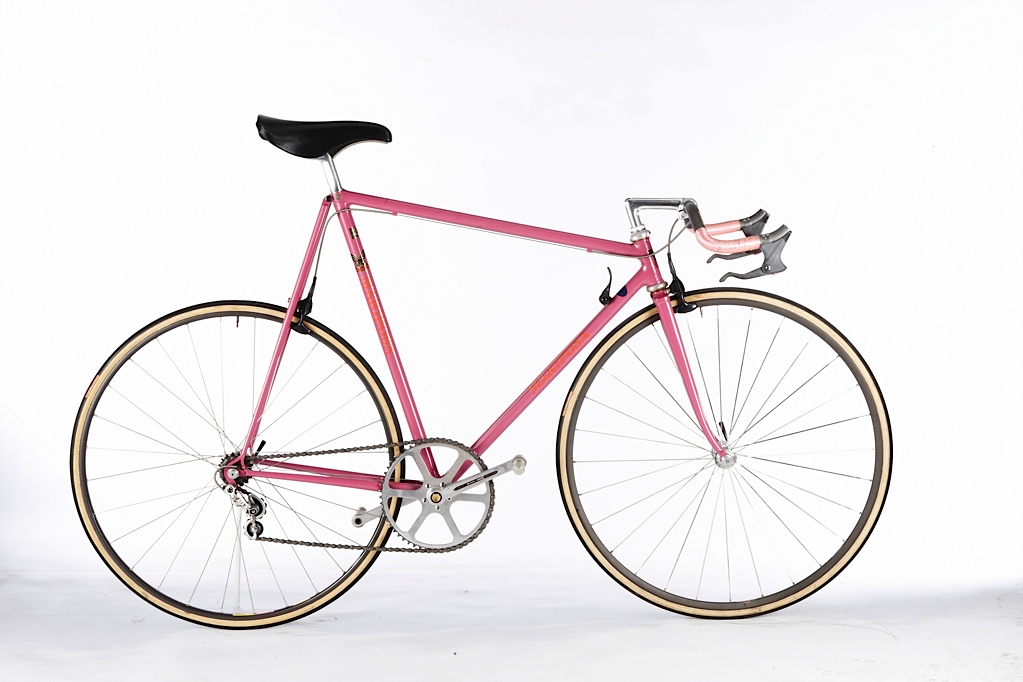 In 1992 Greg was riding in a London Centennial Wheelers club ride and was killed when a pickup truck drove into the back of the group. That morning we lost not only one of Canada’s most prominent artists but also one or the nicest, most cheerful persons one could meet. Greg it seems was always smiling and never more so than when he was riding his bike or doing his artwork.

For many years he had organized the Springbank Park race in London, Ontario. On the year of his death the race was run by other members of his beloved London club. My son, Michael Barry, won the race riding his Mariposa. Greg’s widow Sheila presented Michael with his prizes which included a print of the watercolour “Mariposa TT”. I’m sure Greg was looking down with a broad grin, very proud that his race had been won by a Canadian riding a Canadian Mariposa bike.

The above text was written by Mike Barry and originally published in the Spring 2009 edition of Dandyhorse magazine.

2 thoughts on “GREG CURNOE AND HIS MARIPOSAS”