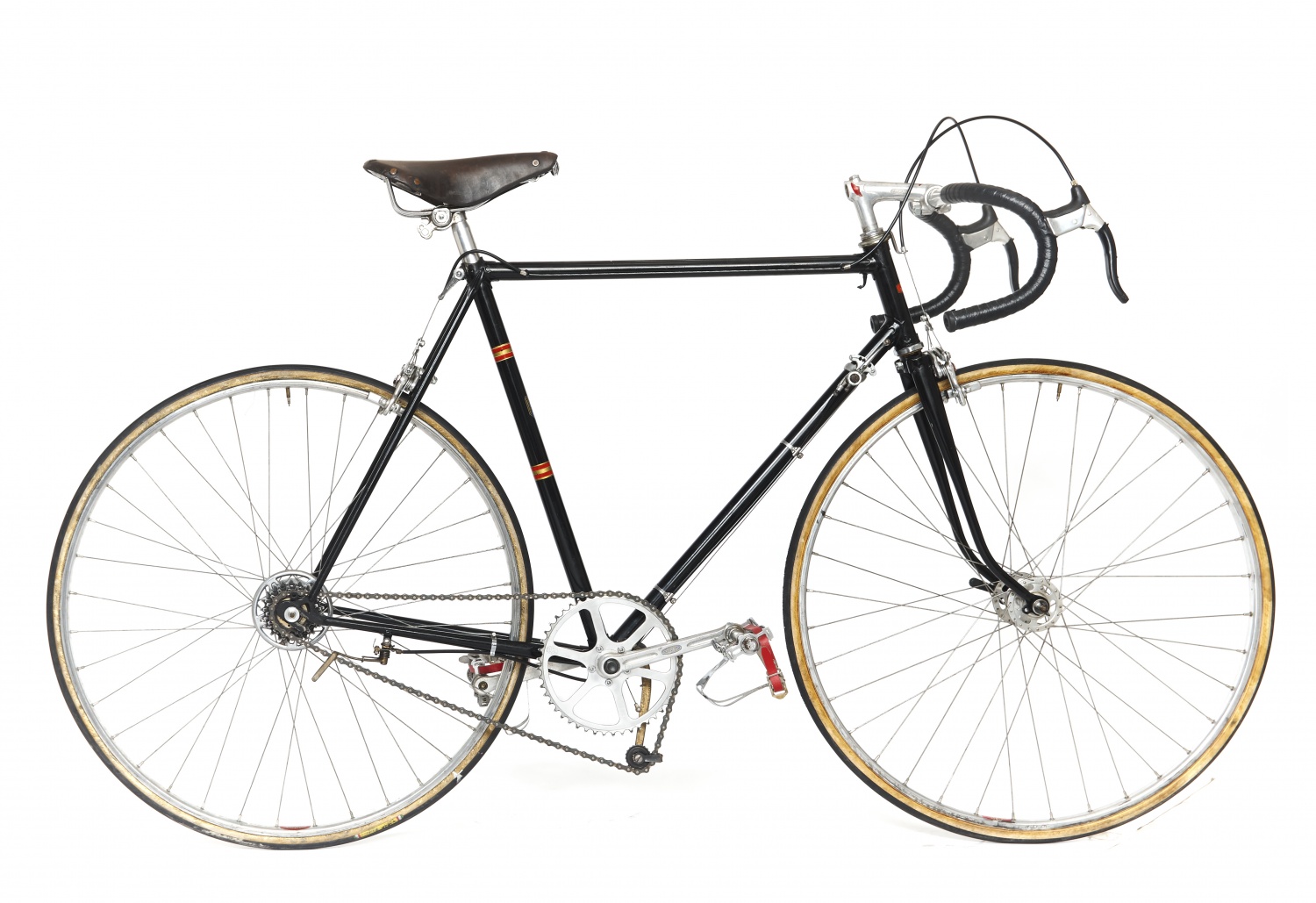 This circa late 1940s André Bertin “Type Special” French Racer was built by André Bertin, a former professional cyclist. At Bicyclesport and Bicycle Specialties, we sold Bertin over the years as they made high quality touring and racing bicycles. This bicycle has been updated over the years (the brakes are not original, for example) but the paint is original as are several of the parts. Below are some excerpts from different sites about the unique derailleur and the frame. 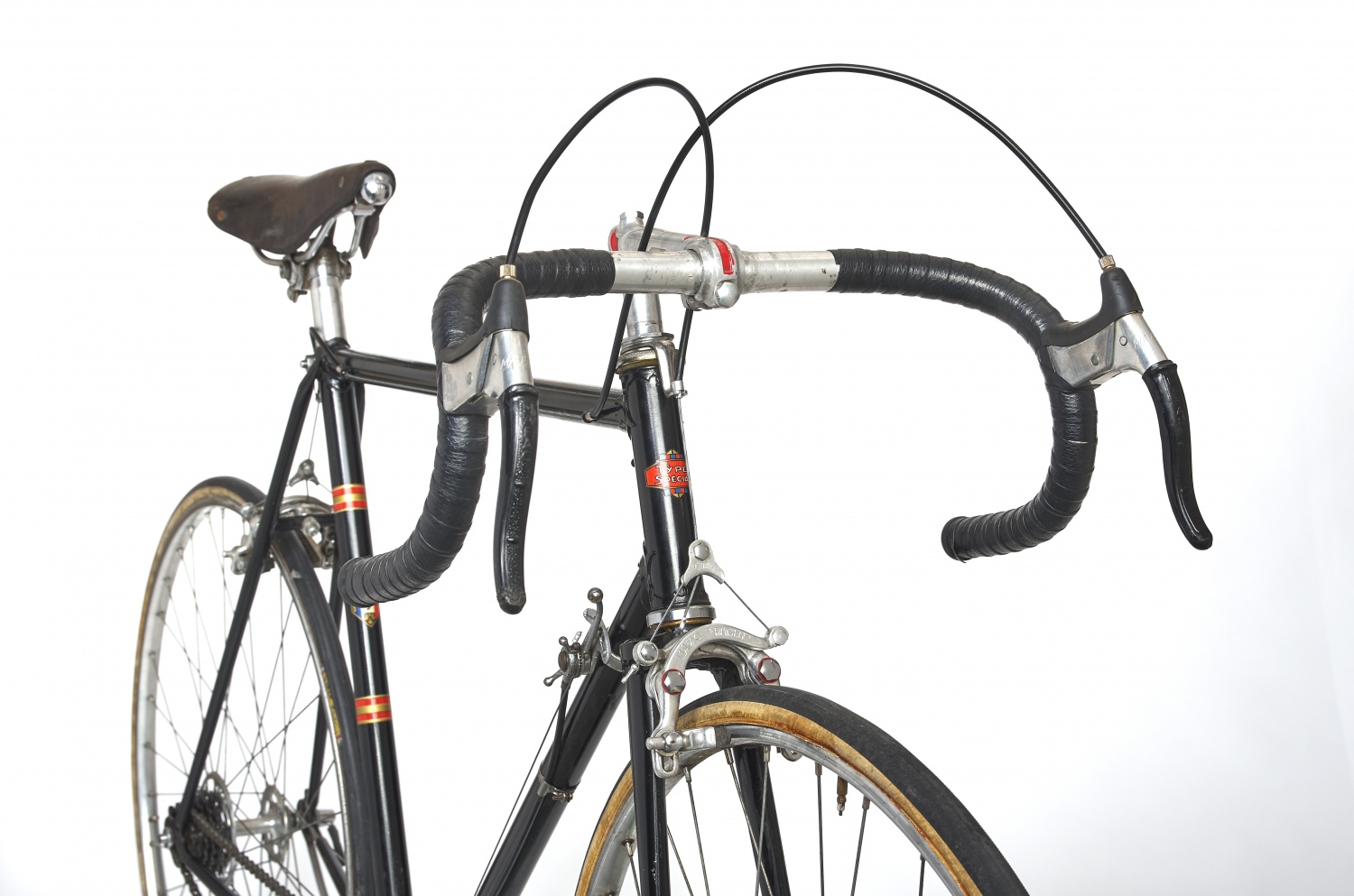 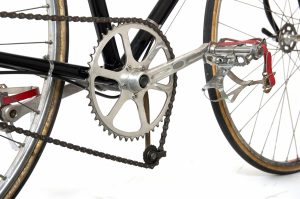 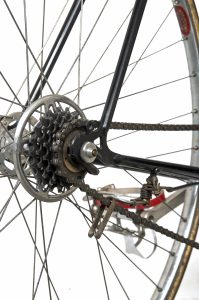 This bicycle has a rare 1933 Super Champion derailleur, the derailleur brand of Oscar Egg, an outstanding Swiss track rider who set the World Hour Record three times before the First World War. To round out his palmares he won stages of both the Tour de France and Giro d’Italia. He is also something of a hero of the Human Powered Vehicle movement as he built recumbent and fully faired aerodynamic bicycles between the two World Wars.

Oscar Egg owned a bicycle shop/workshop in Avenue des Grandes Armees in Paris. In 1932, he introduced the Champion derailleur, a device which involved a derailing fork mechanism attached to the seat stay and a chain tensioner that was attached to the chainstay just behind the bottom bracket. This was a similar design to a 1928 Vittoria.

Oscar Egg refined this design over the next several years. In 1933 the derailing fork moved to below the chainstay and the name changed to Super Champion. By 1935 the Super Champion had assumed its famous form, with the chain tensioner attached to the base of the downtube. This gear was enthusiastically adopted by the racing fraternity, and it was largely pressure from Super Champion, and Super Champion users, which cajoled the Tour de France organisers into allowing derailleurs into the Tour from 1937.

The 1937 and 1939 Tours were won using Super Champion derailleurs, with the 1938 Tour being won using the conceptually similar Vittoria Margherita. The famous legend is that derailleurs had such an impact that the last rider in the 1937 Tour averaged the same speed as the winner of the 1936 version. The effect on the cycle racing world was immediate and substantial, Frank Berto reports that Oscar Egg sold over a million Super Champion derailleurs in the period from 1932 to 1939.

Andre Bertin was a French professional cyclist, team manager and entrepreneur. His life spanned the period pre-WW I to nearly the end of the 20th century. In addition to his early career in cycle racing, many of Andre Bertin’s considerable accomplishments were achieved in the bicycle manufacturing and distribution business in France and the rest of Europe.

Bertin was born on March 3, 1912 in the rural commune (municipality) of Ecques in the Nord Pas de Calais region of Northern France near the Belgian border.

Bertin’s family resettled in St.-Laurent-Blangy, probably post WWI.  It was here that Bertin established a bicycle factory in 1946 to

feed the post war French need for personal transportation. Also, there are indications he may have resumed racing in some capacity in 1945 to 1946 as France began to shake off the effects of the war as well as in occasional events thereafter as demonstrated by the period poster shown at the left below.

Andre Bertin had been a professional cyclist for three years racing for France-Sport from 1935 to 1937. He was primarily a track rider and raced in one day and six day events and had trained and raced, developing his talent, on the local Rosati velodrome in St. Laurent Blagny.  This professional level track was designed by M. Durand, the engineer responsible for the Velodrome D’ Hiver in Paris. Bertin appears to have been a domestique for Antonin

Magne a 2 time Tour de France winner, World champion in 1936 and 3 time winner of the GP des Nations. Bertin left the team before the start of the 1938 season.  It was at this time that he established, in St. Laurent Blangy, a wholesale distribution business for bicycle and motorcycle parts.

During WW II, Bertin remained in France in the Nazi occupied North. He apparently was active with the Resistance and was involved in providing the Allies with information on the launch sites of the V1 cruise missiles deployed in the Pas de Calais area as well as the V2 ballistic missiles. He was effective enough at this to be decorated by the British government postwar for his role in supressing the V1 assault on London in 1944.

After WW II, Bertin began his career as a bicycle manufacturer in St. Laurant-Blangy. Both the original factory and the offices (seen in the photos below) of the company appear to have been located there, the offices having moved from Rue Salengro to Rue Georges Clemenceau in 1943.

In addition to his company’s founding, Bertin raced as an independent pro in 1945 and 1946. Thereafter, until 1966, he was the manager and sponsor of the Cycles Bertin professional team which was allied with various co-sponsors over the life of the squad.

His teams were sponsored quite consistently over several years in the 1960′s by Porter 39  a brewery (later absorbed by Heineken) as well as his associate company, Milremo.  Bertin was also deeply involved in amateur racing in northern France and in Belgium. His company sponsored amateur teams and pros such as Barry Hoban, Albert Sercu and Patrick Sercu who got their start through Bertin.

Team uniforms were always in some combination of Bertin colours of red, white and black and frequently had a sponsor’s name as well.

As though all this commercial activity was not sufficient, Bertin, in 1970, took on the French distributorship for Shimano. The business expanded and was located on Rue Georges-Clemenceau in St. Laurent-Blagny.

This affiliation with Shimano led to the surprising appearance of Japanese parts on otherwise quintessentially French bicycles. Bertin had bicycles built under his name by Cycles Bertin Belgium and created a sales and manufacturing subsidiary in Morocco for his products (see note below). As well, Bertin was assembling and selling mopeds (to the mid-60s) and motorcycles (to the late 50s) out of the French factory.

The colour photo above shows the new factory built in 1974 to replace the old factory destroyed by fire the previous year. Assisted in the business by his son Dominique, Bertin took on assembly/manufacturer of other brands for a time. Labels such as Go

Sport, Nickel, Nakamura and , possibly, some European Specialized bicycles were produced through Bertin. The company was exporting to both the U.S. and Canada during the bike boom in the 70s and older stock Bertins were still being sold in the Western  U.S. by R. Hallett at World Champion Bicycles and in Western Canada by Ed Novotni at Vitasport Cycles up until the early 1990’s. Mike Barry at Bicycle Specialties in Toronto was also a seller of Bertins, on occasion.

In October of 2000, Ets. Bertin sold its Shimano distributorship to Shimano but continued in production with bicycles. The end for the family business begun by Andre Bertin was drawing near. Ets. Andre Bertin had previously been sold to a holding company, Cibo Participations, in 1993. Cibo was headquartered in Auch, in Gascony, in southern France and appears to have stopped trading about the time of the end of bicycle production in 1999 – 2000. Sadly, the takeover in 1993 had soon been followed by the death of Andre Bertin himself on January 5, 1994 in St.-Laurent-Blangy at the age of 81. 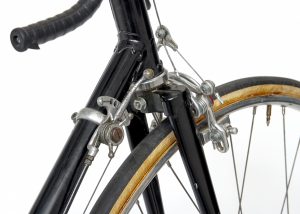 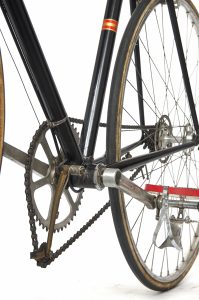