Disc Brakes Or Not? 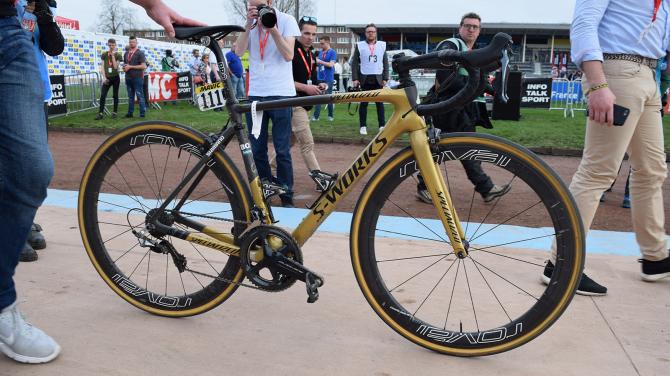 Paris Roubaix, the toughest of the one day professional bike races, is not only decided by skill, endurance, power and luck but also on equipment selection. Each year, prior the race, the cycling media studies the bikes the riders will use, reporting on tire pressure, tire size and new technologies being introduced to absorb the vibrations the riders will endure as they thrash over the cobbles. Some bikes will have elastomers built into the frames, others have suspension forks, some riders use cantilevers for increased mud clearance, others use disc brakes for mud clearance and braking performance and almost all use larger diameter tires (25-28 mm) at low pressure to avoid punctures and increase comfort.

Over the last five years the most controversial of those innovations have been disc brakes. The majority of the peloton is against their use as they can cut riders in crashes, add weight to the bike and decrease aerodynamics while the bike industry is keen for them to be universally adopted as their use by the professional will drive the marketplace.

Interestingly, this year’s Paris Roubaix winner, Peter Sagan, chose not to use disc brakes even though he is sponsored by Specialized, a company who is driving the push for the riders to adopt them. Shortly after his victory the company ran ads promoting a bicycle almost identical to the one he rode, but with disc brakes. If they are an advantage, why wouldn’t he use them in a technical race? Because, in Paris Roubaix a flat tire and a slow wheel change can make the difference between winning and losing. A quick release non-disc brake wheel can be changed in less than ten seconds while disc brake wheels take far longer as the rotor needs to be lined up to slide in a 3 mm slot between pads, without displacing them. In the heat of the race, that’s a difficult task even for the best mechanic. A wheel change is only complicated and slowed if the bike is fitted with thru-axles instead of quick-releases, a system that many companies are now using on disc brake bikes to reduce the amount the wheel flexes in the frame.

As punctures are common in the cobbled classics, teams will place personnel at the end of the cobbled sectors so a rider can quickly grab a wheel without waiting for the team car which could be several minutes behind the race. Sometimes, they will even grab a wheel from a spectator or another team. With disc brakes, the rider will require a wheel with the right size rotor and perfect spacing—a spare wheel which is specific to his bike—decreasing the odds of getting a quick wheel change that will work properly.

If braking power were the only factor, Sagan might have opted for discs but on the road, the advantages of disc brakes aren’t as great as they are on trails or a cyclo-cross course where a rider will be on and off his brakes far more frequently and braking power is crucial on steep technical descents or sharp muddy corners. Most of the Paris Roubaix course takes place on straight cobbles roads with very few corners. When it rains, riders avoid slamming on their brakes as wet cobbles are like ice and any sudden reaction will bring the rider crashing down. They feather brakes to scrub speed and maneuverer the bike to avoid obstacles or massive potholes between the stones.

Once disc brake technology improves so that a universal, light, aerodynamic system with covered rotors that is adopted they will be widely used in the peloton. But until then, riders will continue to ride with traditional caliper brakes and standard quick releases even in the most challenging road races.

3 thoughts on “Disc Brakes Or Not?”