The Classics: “A Sport Where You Eat The Other Rider’s Lunch First” 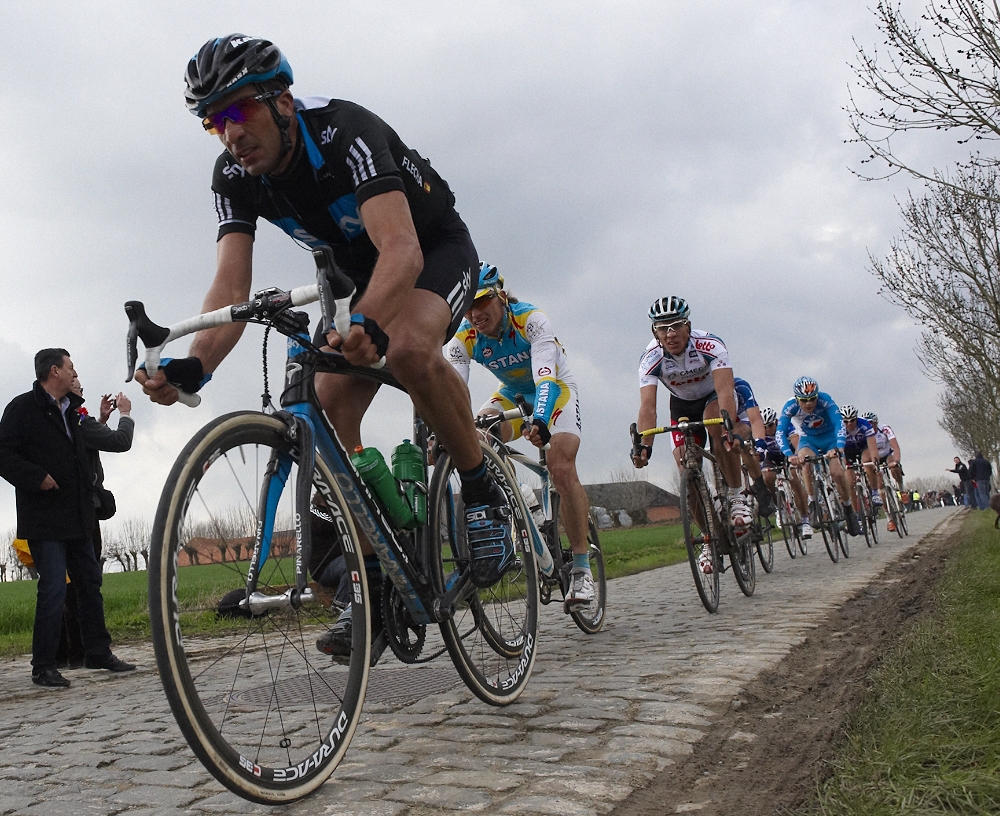 Cycling has traditionally been a working class sport. From the first races over a century ago, a bicycle became an escape from the mines, the fields and the factories. Young men saw the opportunity to evade a predestined future by racing a bike. With nothing to lose and idolatry, wealth and prestige to gain, they devoted themselves to their new job. Cycling is not only a sport or pastime but also a lucrative profession compared to a bricklayer’s life.

Cyclists, especially those from Northern Europe, are hardened and tough. The environment, the races and the culture change a person. Only the mentally and physically strong survive; the toughest of the Classics riders were raised with a fighter and survivor mentality. The Dutch World Champion Hennie Kuiper said, “It is a sport where you eat the other rider’s lunch first.” Some cyclists will do whatever necessary to survive, to win, or to profit. 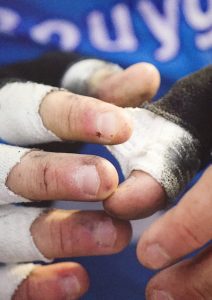 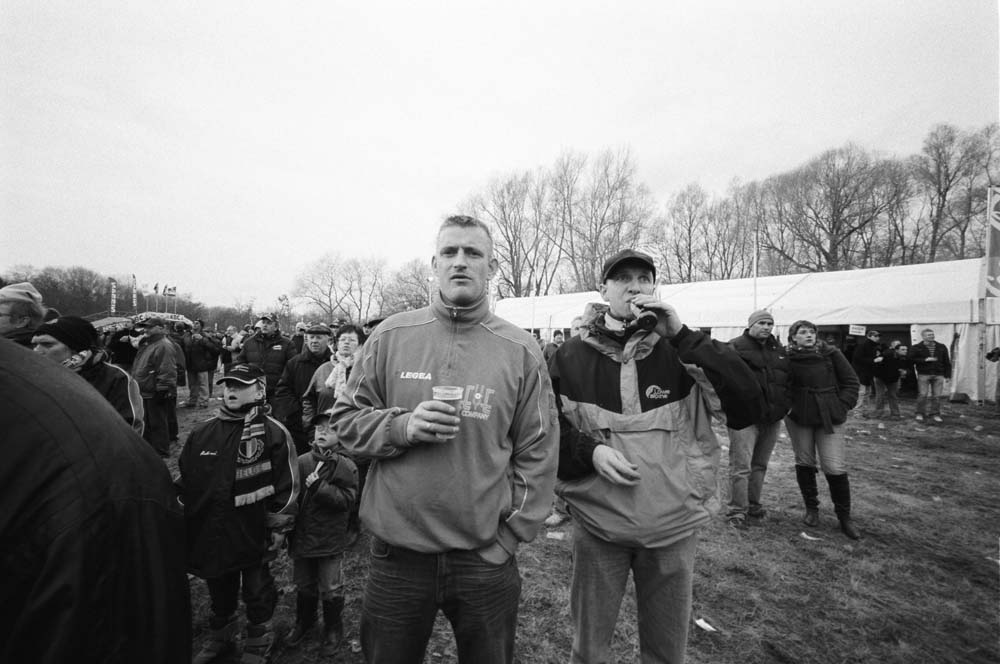 At any of the start lines in Belgium or northern France, the duress of the lives lived can be seen on the spectators’ faces. Bundled in layers of grey, navy and forest green clothing to protect themselves from the elements, the crowd is proletarian in appearance – not consumed with vanity but full of hardened humility, they wave their yellow Flandrian flags, chant songs to encourage their favorites, and drink Belgian beer at ten in the morning as if it were late in a night of festivities. Their cheers are rooted in both passion and a sense of profit as the spectators not only encourage their favorites because they are fervent fans, but also because many have bets placed with the local bookies. To them, the Tour de France, the Giro d’Italia, or the countless other races of prestige during our season are secondary to the cobbled Classics. The races somehow provide a break in the dreary damp spring, a festival to celebrate the bike. The races, which have crisscrossed the rural landscape for over a century, were only interrupted by the two World Wars when the farm fields became battlefields. In Belgium, bike racing has the social status of dog racing elsewhere: The races are bet on, the cyclists are driven until they fail, and the drunken crowds spit beer at their fallen heroes.

During his cycling career, while living and racing in Belgium, the Dane Brian Holm would only read novels relating to the two Great Wars. Although the Danes are known for their tenacity in adverse conditions, even he found the conditions in Belgium challenging. Daily, Holm raced and trained through the fields that the soldiers had fought and died on. The riding was tedious as the wind blew the thrashing rain sideways, the mud and manure dragged onto the roads by the tractors flicked into his face, and the chill in his bones never seemed to leave until the summer sun shone. For years, to strengthen his constitution and bring perspective, he read novel after novel of the terrors the young boys had endured in the trenches in Flanders fields. Somehow, it gave him purpose, motivated him, and made his job easier. 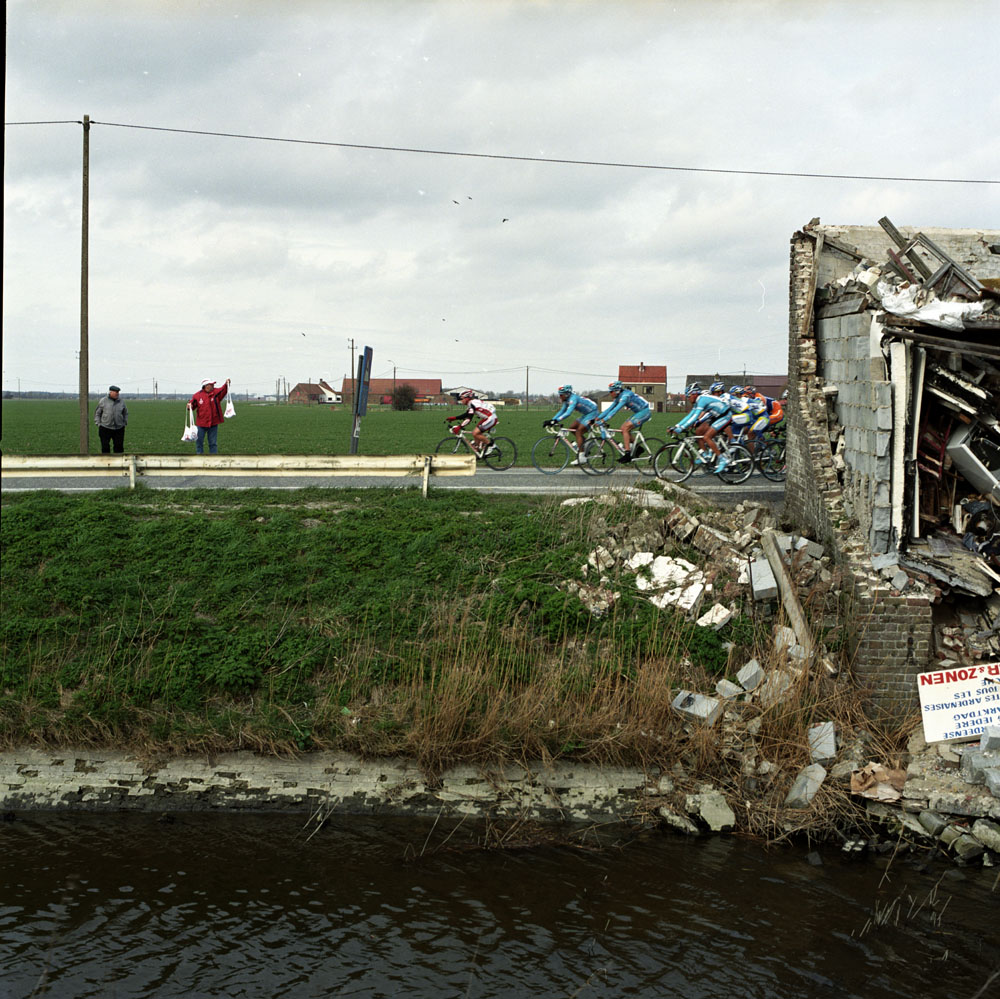 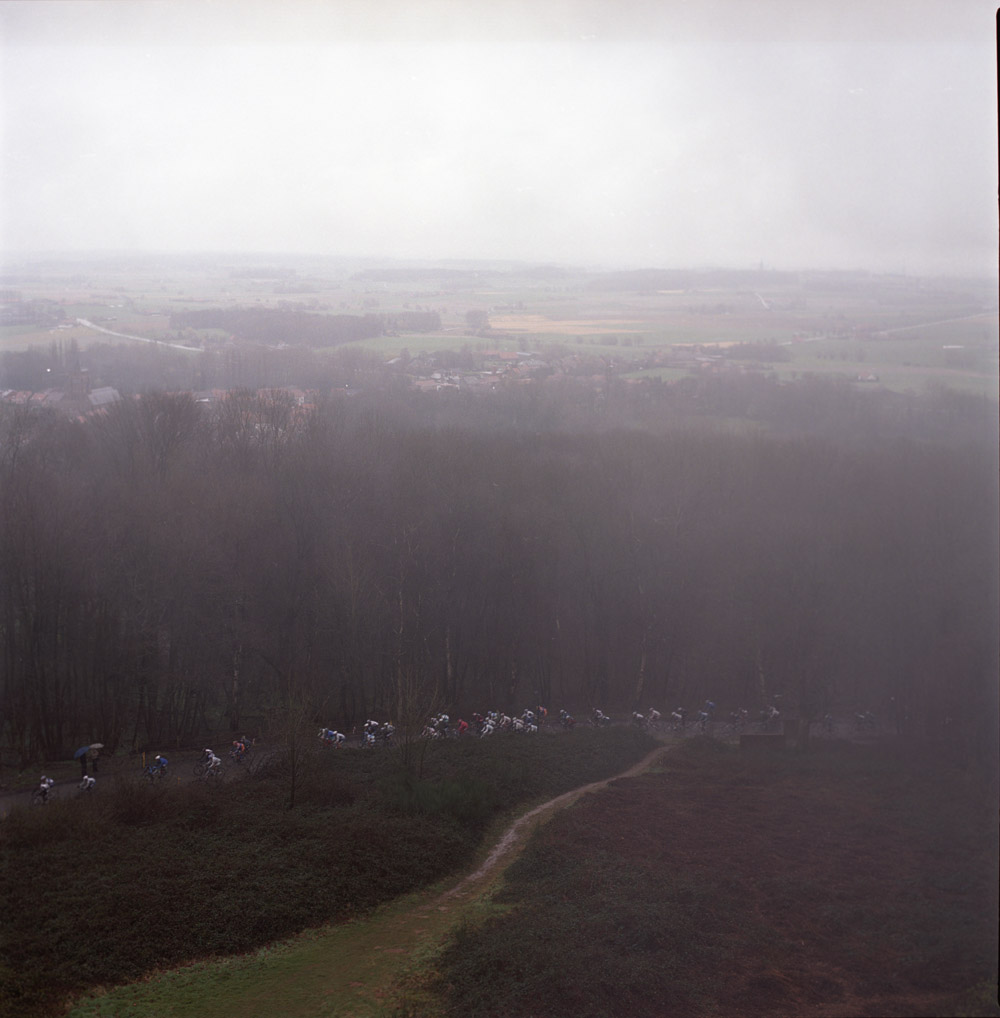 Racing Through The Mist In Flanders

The environment is hauntingly grim in the winter and spring. The mist lies low below the grey skies and the countryside is damp, brown, and green. Racing through it, there is an eerie sense of the past, or perhaps it is my knowledge of the horrors and what those boys endured that haunts. The races take us through towns and fields familiar from high school textbooks and grandparents’ stories yet neither were able to clearly convey the bleak environment. It wasn’t until I had felt the dampness, the grey skies and slashing rain, and had ridden through these fields that I had any real concept of the terror of the battles. We are only bike racers yet we often struggle to endure the races – perspective makes our weakness seem pathetic. 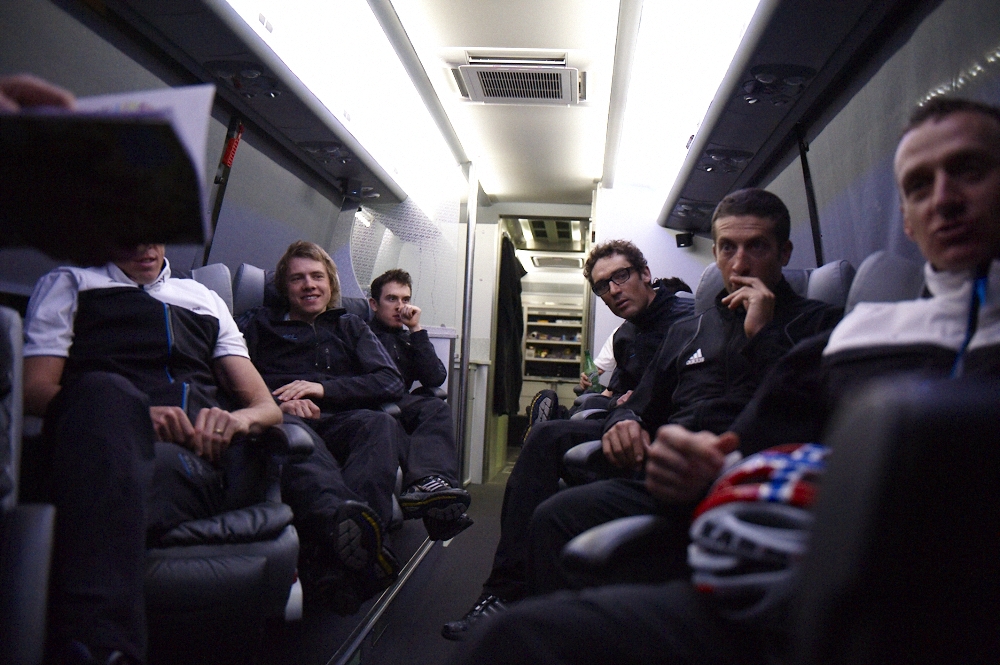 In the race bag, there is everything that might protect me in adverse conditions. Cyclists are at war with the weather. In the spring we freeze; in the summer we dehydrate. With a tailwind, the attacks never relent as the wind gives everybody in the peloton the false sense that he has the legs of a champion. A headwind saps our energy and we look for cover behind a wheel and a bigger body. With a strong wind, only the brave, strong or naïve attack alone. The weather, like the courses, is never the same – the changing conditions create a dynamic race, which the cyclist either embraces or battles.

In the spring we have cold weather clothing, which we can only hope will keep us warm. Each rider finds combinations of clothing that work well for his body and somehow, we place false confidence in the clothing, thinking it will protect us. It never does. We all freeze in cold rain. We are fortunate when we can make it through the first kilometers of a wet race without feeling the cold water slowly soak through the layers, down the ankles and into the shoes. Frozen fingers disable a cyclist: unable to shift his gears, pull the food out of his pockets, or squeeze his water bottle, dreams of victory are replaced by hopes of simply surviving.

In the cold, the mentally tough, conditioned, and aware race while the others, defeated when they wake in the morning to rain on the window, simply pedal because they must. The riders fight for the victory at the front of the peloton while those behind fight to make it to the finish. Daily, every rider has his goal and battle, and whether it is internal or external, the goal and the struggle evolve through the season. We all seek the moment where suffering can be pushed from our thoughts as it is overwhelmed by the emotion of fluidity on a bike. 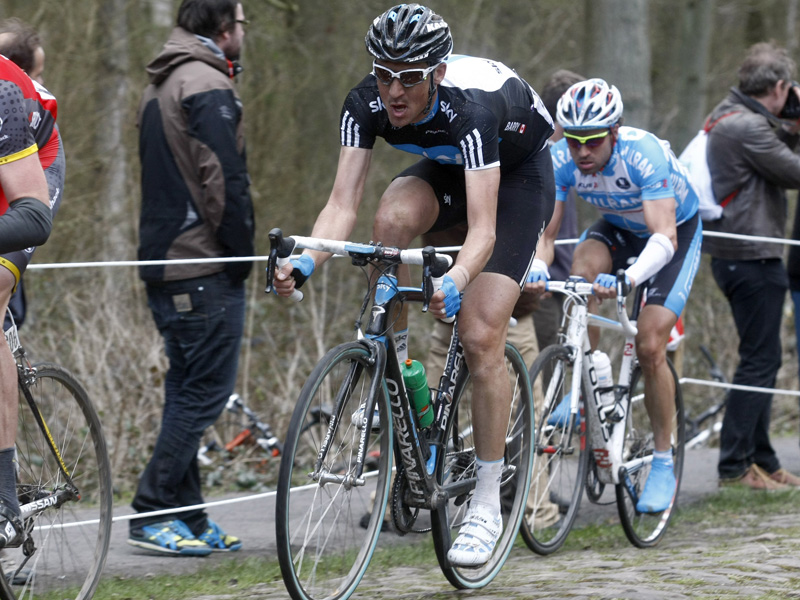 In the Classics, and in flatter races, a power to weight ratio is not significant in predicting performance. The bulk of muscle needed to propel a bike forward does not need to be carried uphill. But when mountains and hills loom, the ratio between power and weight becomes a decisive factor. Climbers, like distance runners, become near-anorexics to reach the ideal power to weight ratio of close to 7 watts per kilo while the Classics men race at a heavier weight than they will in the Tour de France or Giro d’Italia. On the cobbles, like in the wind, brute force moves the bicycle quickest.

When a rider is en forme, he can fly through the spring as most cyclists can maintain a peak in fitness for roughly a month. Packed into a week, with good luck, he can perform consistently and achieve his targets.

A rider who knows the tiny rural roads well, who trains on them often, and who has raced on them since his youth has a greater chance of winning a Classic. In over a century of racing, the Belgians and northern Europeans have dominated the results while the Italians have earned sporadic victories by specialists who have focused their careers on the races. In a career spanning sixteen years, Gilbert Duclos-Lassalle, a Frenchman with a passion for Paris-Roubaix, won the race twice near the end of his career. His victories came with experience. Like a master chef who cooks without recipes but with savoir-faire, the rider needs knowledge, instinct, power and panache to win a Classic. Races can be formulaic in structure but the Classics are so intensely contested, and so physically difficult, that a command of the minutiae can mean the difference between being a contender and being a winner.

To win the rider needs to take a chance, yet confidence determines the outcome. A rider who believes the moment he attacks is the right one, believes he has the legs to go all the way to the finish, and believes his team is there to support him will win. The bike floats beneath the confident rider. He looks back only to see the how large the gap that he has opened is and then pushes on towards the finish line. As soon as a rider looks back again and questions his ability to win, the odds are much greater that he will be caught and fail. A look over the shoulder shows his weakness, that his mind is questioning his legs’ ability to push the pedals, and that his focus is taken away from the objective of winning the race while he gives in to the fear of being caught.

The Classics strip cycling to the bone, which is what attracts millions of spectators and invokes such emotion in the crowds. The athlete and the machine are pushed to their limits in a six-hour crusade of suffering, danger, triumph and defeat. There is a photograph of George Hincapie taken after the 2002 Paris-Roubaix that captures the race, the Classics, and true cycling. He is sitting on a filthy concrete shower bench in the velodrome in Roubaix. His body is covered in mud, the sponsors’ logos on his clothing are indecipherable, and his credit card size race radio lies discarded on the floor. His low-slung head is held between his hands: he is completely defeated, shattered mentally and physically by the weather, the race, his adversaries and himself. He told me that the photo is what motivates him to go back to Roubaix each season.

Cycling is pure and primitive as men are seen suffering at their utmost on a simple machine. In the film biography of Eddy Merckx, La Course en Tête, a journalist asks Eddy if he thinks cycling is popular because, quoting scientist and Nobel Prize winner Jacques Monod, “people admire courage, calculation and will power, all of which are primitive instincts.” Eddy quietly ponders the question and then nods his head in agreement.