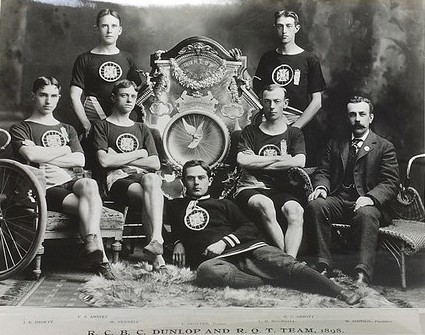 When Torontonian Frank Bentley of the Queen City CC won the Dunlop Trophy Race in 1926 he brought to an end an annual series of spectacular bike races. The races attracted the best riders in North America and crowds of tens of thousands lined the streets of Toronto to watch them compete. It was one of the premiere sporting events in the country. 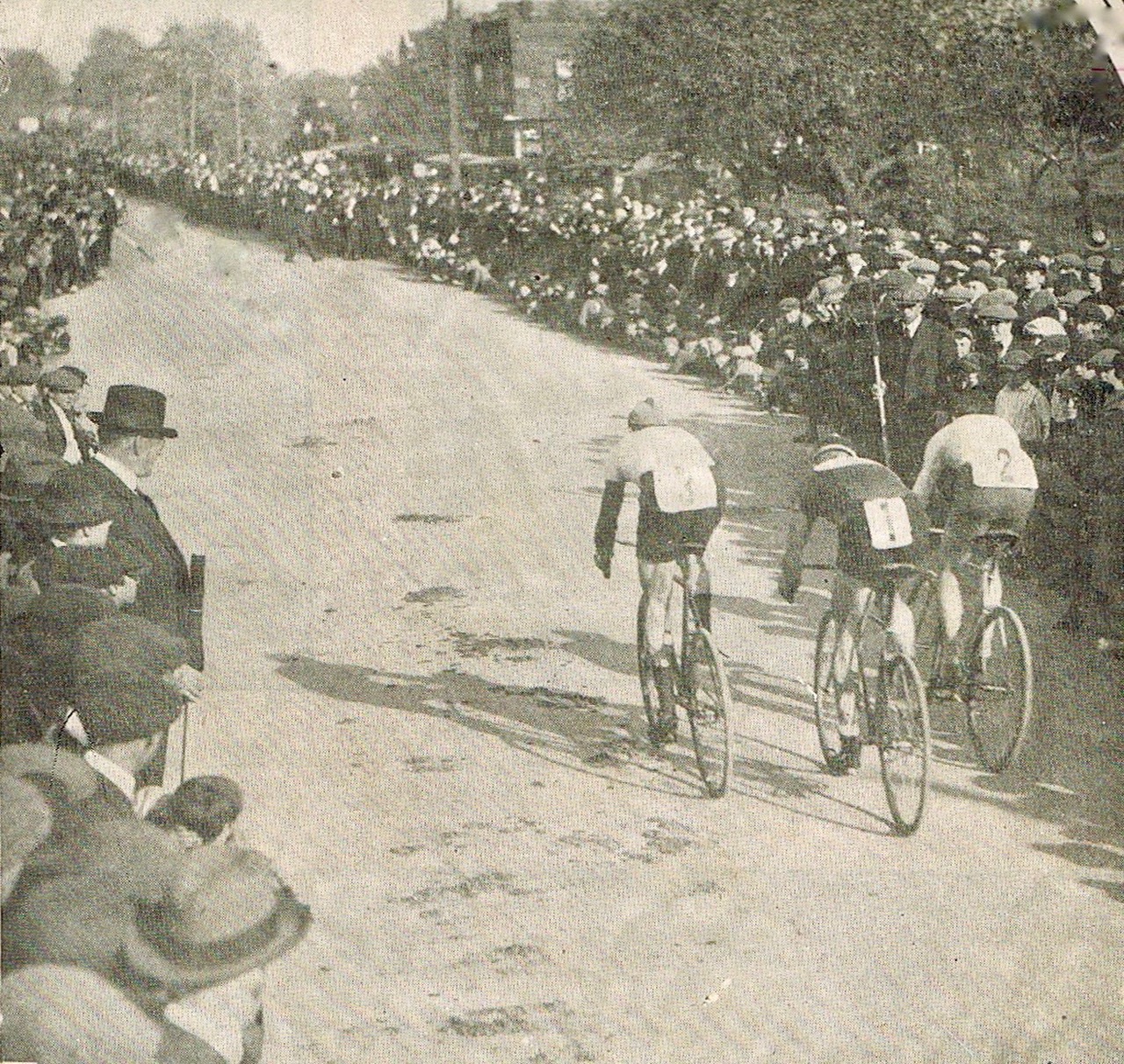 The first race for the Dunlop Trophy was held in heart of Toronto in 1894. It started on the Woodbine (later called Greenwood) horse racing track in the east end and then went east on Kingston Road for seven and a half miles to the turnaround where the riders spun around a barrel and retraced the route to the finish line on the Woodbine track. They rode five miles on the track at the finish for a total distance of twenty miles (32 kms). The Dunlop Trophy was presented to the winning Athenaeum Club Team. The field composed of teams of ten riders with the finishing position of the fastest five finishers from each team deciding the result.

The first riders to finish were:

However McCarthy was disqualified for not “turning the barrel”. There was so much interest in the race that McCarthy appealed and took the case to court where a judge upheld the decision of the race judges. 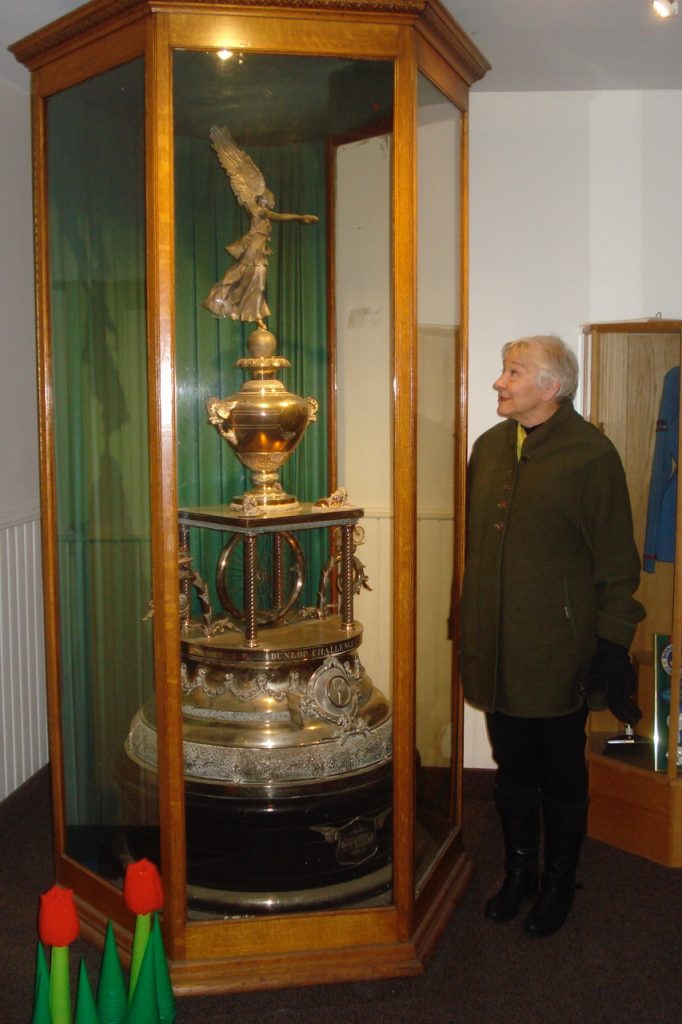 The first Dunlop Trophy, now on display at the Royal Canadian Bicycle & Curling Club on Broadview Avenue in Toronto 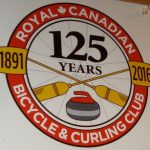 In 1895 the second Dunlop Trophy Race was run with the Royal Canadian Club team taking the first of two consecutive wins that gave them outright possession of the magnificent trophy that remains in the Royal Canadian Bicycle and Curling Club’s clubroom in Toronto to this day.

Most of the Dunlop Trophy Races were run in Toronto but in 1897 the race was held in London, Ontario. The Royals won again and were presented with a new trophy. William Greatrix of the Queen City Club posted the fastest time. He won again the following year when the race returned to the roads of Toronto with the Ramblers CC taking the Team Trophy.

1898 saw the first of a five wins for the Royals. The rule was changed so that a team would have to have three wins to win the trophy outright. The Royals easily added to their trophy room by winning every year from 1898 until 1902. The rules were also changed to have teams of five riders with three to count.

Every year the race attracted enormous crowds with spectators lining the road five deep. The roads were unpaved with many potholes and the finishing track surface was cinders, more suited to horses than bicycles.

The Royals dominated the race every year until 1903 when the race was changed from being a team race to an individual handicap race with all the starters being issued a start time based on their previous performance in other races. The handicap allowances ranged from a minute up to an astonishing 15 minutes on the scratch riders. Fifteen minutes start in a twenty-mile race seems extraordinarily generous but probably indicates the vast difference between the ability of the scratch men and the “also-rans”.

However looking through the start lists makes it difficult to understand some of the handicap allowances given. In 1922 local pro and top six-day rider Reggie Fielding was given 13 minutes start over scratch man Norman Webster. Webster was a great rider but was unable to catch those in front. Fielding didn’t win but the first place went to his QCBC teammate Jos Noel who started and finished in the same time as Fielding

The race went from strength to strength attracting riders from all over North America. This at a time before air travel when travelling to Toronto from California for a bike race entailed days on a train. The American World Champion, Hans Ohrt came from San Francisco to win the fastest time prize in 1915

Although I cannot find a list of the prizes offered they would seem to be substantial. A copy of a letter addressed to all prize winners in 1922 indicates that those winners choosing furniture as a prize “should state the design and class of wood desired, with watches open faced or closed should be stated”. Material prizes were in addition to the trophies and medals awarded prizewinners.

In 1926 when Frank Bentley (QCBC) won a hotly contested sprint finish for the last Dunlop Trophy Race he rode his custom bike built by Doc Morton. Morton had been one of Canada’s top racing cyclists and towards the end of his racing career he turned to frame building. His bikes were in high demand by the racers of the twenties and thirties. I have three or four of his bikes in my collection including the one that Bentley rode to win the last Dunlop Trophy race. 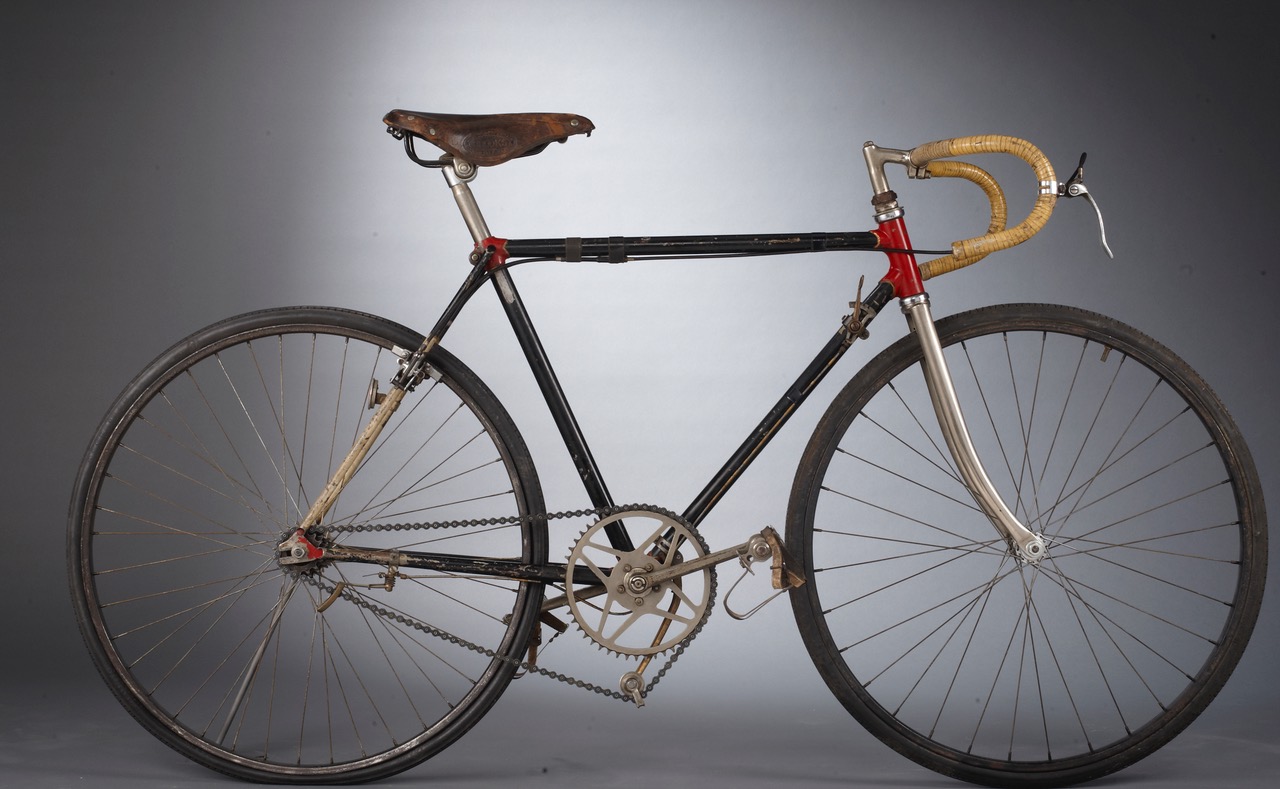 The Doc Morton bike that Frank Bentley won the 1926 and last Dunlop Trophy Race. The derailleur and brake were fitted in 1930. Bentley raced with a single fixed gear and no brake as would all of the other competitors.
Photography by Walter Lai

After the race in 1926, which had been run on Metcalfe Street in Ottawa, the Dunlop Company announced that they would not continue sponsoring the event. The reason given was that they had too many complaints from motorists that the crowds and closure of the roads were disrupting motor traffic. Could it be that the Company was more interested in the growing car tire business than the small and dying bike business? 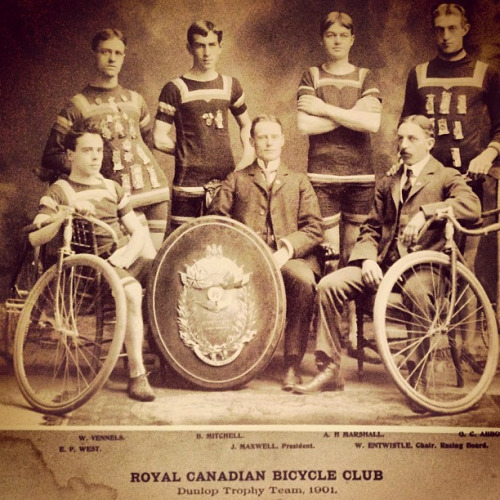 One thought on “The Dunlop Trophy Race”