In Search Of Perfection 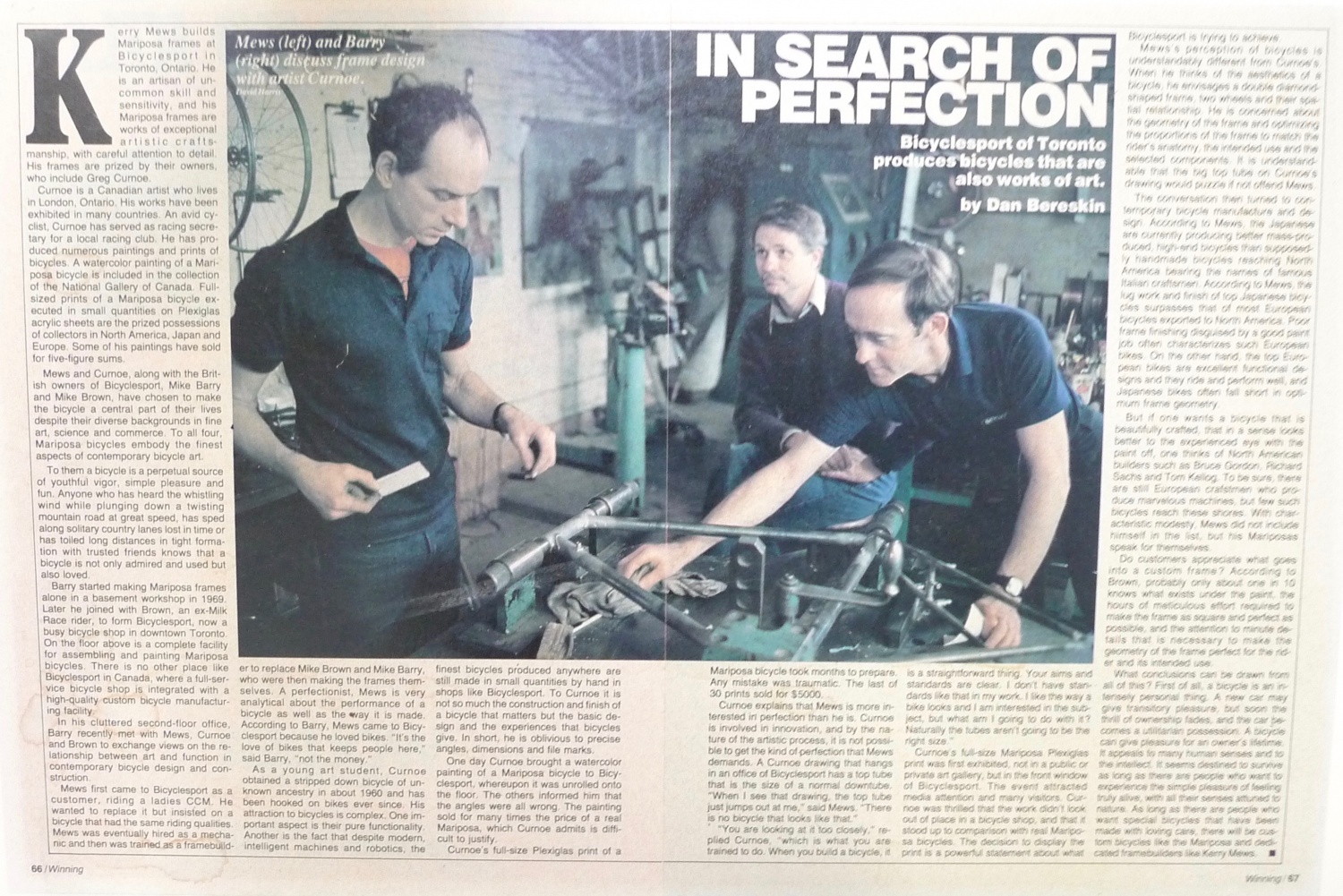 The following article was published in Winning Magazine in the early ‘80’s. It is a conversation on bicycles, art and design between Brown, Barry and Mews, the Mariposa framebuilders at the time, and the Canadian artist Greg Curnoe. Thirty years later the ethos in our shop is much the same. Everyone who works in the shop is a passionate cyclist and we are continually working to make better bicycles.

Kerry Mews builds Mariposa frames at Bicyclesport in Toronto, Ontario. He is an artisan of uncommon skill and sensitivity, and his Mariposa frames are works of exceptional artistic craftsmanship, with careful attention to detail. His frames are prized by their owners, who include Greg Curnoe.

Curnoe is a Canadian artist who lives in London, Ontario. His works have been exhibited in many countries. An avid cyclist, Curnoe has served as racing secretary for a local racing club. He has produced numerous paintings and prints of bicycles. A watercolour of a Mariposa bicycle is included in the collection of the National Gallery of Canada. Full sized prints of a Mariposa bicycle executed in small quantities on Plexiglas acrylic sheets are prized possessions of collectors in North America, Japan and Europe. Some of his paintings have sold for five figure sums.

Mews and Curnoe, along with the British owners of Bicyclesport, Mike Barry and Mike Brown, have chosen to make the bicycle a central part of their lives despite their diverse backgrounds in fine art, science, and commerce. To all four, Mariposa bicycles embody the finest aspects of contemporary bicycle art.

To them a bicycle is a perpetual source of youthful vigor, simple pleasure and fun. Anyone who has heard the whistling wind while plunging down a twisting mountain road at great speed, has sped along solitary country lanes lost in time or has toiled long distances in tight formation with trusted friends knows that a bicycle is not only admired and used but also loved.

Barry started making Mariposa frames alone in a basement workshop in 1969. Later he joined Brown, an ex- Milk Race rider, to form Bicyclesport, now a busy bicycle shop in downtown Toronto. On the floor above is a complete facility for assembling and painting Mariposa bicycles. There is no other place like Bicyclesport in Canada, where a full service bicycle shop is integrated with a high-quality custom bicycle manufacturing facility.

Is his clustered second-floor office Barry recently met with Mews, Curnoe and Brown to exchange views on the relationship between art and function in contemporary bicycle design and construction.

Mews first came to Bicyclesport as a customer, riding a ladies CCM. He wanted to replace it but insisted on a bicycle that had the same riding qualities. Mews was eventually hired as a mechanic and then was trained as a framebuilder to replace Mike Brown and Mike Barry who were then making the frames themselves. A perfectionist, Mews is very analytical about the performance of a bicycle as well as the way it is made. According to Barry, Mews came to Bicyclesport because he loved bikes. “It’s the love of bikes that keeps people here,” said Barry, “not the money.”

As a young art student, Curnoe obtained a stripped down bicycle of unknown ancestry in about 1960 and has been hooked on bikes ever since. His attraction to bicycles is complex. One important aspect is their pure functionality. Another is the fact that despite modern intelligent machine and robotics, the finest bicycles produced anywhere are still made in small quantities by hand in shops like Bicyclesport. To Curnoe it is not so much the construction and finish of a bicycle that matters but the basic design and experiences that bicycles give. In short, he is oblivious to the angles, dimensions and file marks.

One day Curnoe brought a watercolor painting of a Mariposa bicycle to Bicyclesport, whereupon it was unrolled onto the floor. The others informed him that the angles were all wrong. The painting sold for many times the price of a real Mariposa, which Curnoe admits is difficult to justify.

Curnoe’s full-size Plexiglas print of a Mariposa bicycle took months to prepare. Any mistake was traumatic. The last of the 30 prints sold for $5000.

Curnoe explains that Mews is more interested in perfection than he is. Curnoe is involved in innovation, and by the nature of the artistic process, it is not to get the kind of perfection that Mews demands. A Curnoe drawing that hangs in an office of Bicyclesport has a top tube that is the size of a normal down tube. “When I see that drawing, the top tube just jumps out at me, “ said Mews. “There is no bicycle that looks like that.”

“You are looking at it too closely,” replied Curnoe, “which is what you are trained to do. When you build a bicycle is it a straightforward thing. Your aims and standards are clear. I don’t have any standards like that in my work. I like the way a bike looks and I am interested in the subject, but what am I going to do with it? Naturally the tubes aren’t going to be the right size.”

Curnoe’s full sized Mariposa Plexiglas print was first exhibited, not in a public or private art gallery, but in the front window of Bicyclesport. The event attracted media attention and many visitors. Curnoe was thrilled that the work didn’t look out of place in a bicycle shop and that it stood up to comparison with real Mariposa bicycles. The decision to display the print is a powerful statement about what Bicyclesport is trying to achieve.

Mews’s perception of bicycles is understandably different from Curnoe’s. When he thinks of the aesthetics of a bicycle he envisages a double diamond shaped frame, two wheels and their spatial relationship. He is concerned about the geometry of the frame and optimizing the proportions of the frame to match the rider’s anatomy, the intended use and the selected components. It is understandable that the big top tube on Curnoe’s drawing would puzzle if not offend Mews.

The conversation then turned to contemporary bicycle manufacture and design. According to Mews, the Japanese are currently producing better mass-produced, high-end bicycles than the supposedly handmade bicycles reaching North American bearing the names of the famous Italian craftsmen. According to Mews, the lug work and finish of top Japanese bicycles surpasses that of most European bicycles exported to North America. Poor frame finishing disguised by a good paint job often characterizes such European bicycles exports to North America. On the other hand, the top European bikes are excellent functional designs and they ride and perform well, and Japanese bikes often fall short in optimum frame geometry.

But if one wants a bicycle that is beautifully crafted, that in a sense looks better to the experienced eye with the paint off, one thinks of North American builders such as Bruce Gordon, Richard Sachs and Tom Kellogg. To be sure, there are still European craftsmen who produce marvelous machines, but few such bicycles reach these shores. With characteristic modesty, Mews did not include himself on the list but his Mariposas speak for themselves.

Do customers appreciate what goes into a custom frame? According to Brown, probably only about one in 10 knows what exists under the paint, the hours of meticulous effort required to make the frame as square and perfect as possible, and the attention to minute details that is necessary to make the geometry of the frame perfect for the rider and its intended use.

What conclusion can be drawn from all of this? First of all, a bicycle is an intensely personal thing. A new car may give transitory pleasure, but soon the thrill of ownership fades, and the car becomes a utilitarian possession. A bicycle can give pleasure for an owner’s lifetime. It appeals to the many human senses and to the intellect. It seems destined to survive as long as there’s re people who like to experience the simple pleasure of feeling truly alive, with all of their senses attuned to nature. As long as there are people who want special bicycles that have been made with loving care, there will be custom bicycles like the Mariposa and dedicated frame builders like Kerry Mews.