Down the Lascaux Caves by Ancient Tandem 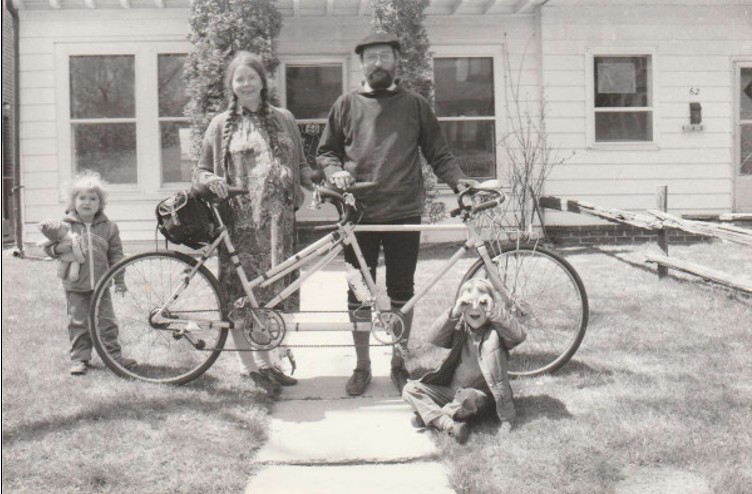 It was a common problem, one that every married couple faces.

We were keen cyclists who had toured all over England and France and Italy, and much of Canada too. We loved our vintage tandem, a bright yellow, 1920s Royal Enfield that had carried us far. And we wanted to go over to France again that year, down the Loire Valley or up to Périgord, that lovely unspoilt region east of Bordeaux.

Then my wife announced: “But what about the baby?”

“Oh no!” we said together. No more cycling trips to France. No more lovely rides along the canals under the plane trees. No more sips of Ricard in the café patios as we watched the people and the scenery, and practised our French.

“We’ll have to sell our tandem and buy a four-door car,” my wife wailed. “Oh no! Our cycling days are over!”

But being a resourceful pair, we sat down and worked out a solution to our cycling problem. “We’ll take the baby with us,” we decided.

So there we were, working out the safest and most efficient way to carry our newborn to France.

I should say, off the top, that these events happened a long time ago. Our little baby is still a keen cyclist and still rides our 1920s Royal Enfield tandem. But he just had his 40th birthday and he now spends his time taking his wife and his two little children on cycling trips all over the Isle of Wight and, occasionally, to France.  Some things never change, do they?

Safety was, of course, paramount for our little baby then as it is now. We consulted our friendly doctor, a sympathetic type who well understood our dilemma. Cycling shouldn’t be a problem, he said. Just keep the days short, take along lots of nappies and baby food, have plenty of rest breaks and watch his little neck.

You don’t want whiplash, the doctor warned, a severe look on his face. Make sure Little Adrian is old enough to sit on the bike, has a good, strong neck and lots of padding on his head. And the key to a strong neck and head is to wait for the baby to build a few muscles.

Our doctor told us to wait 10 months, until our little baby was strong enough to stand on his own and hold his head up with no problem. So that is what we did. We cancelled our trip that year and, instead, booked a flight for the following summer when Little Adrian would be 10 months old or, just to be safe, a little more.

Next step was to build a suitable baby seat. We could have bought a baby trailer, but they were heavy and awkward in those days, and impossible to carry on the aeroplane from Canada. So we gave up that idea. As for baby seats, we dug around until we found one with a high back to minimise the whiplash, with high sides to stop him falling out and a good hearty seatbelt to make sure he didn’t climb down and run away.

Then I took that baby seat and replaced the mounting brackets with solid bits of aluminium that we attached firmly to the fork ends, seat post and seat stays. We didn’t want that seat coming loose!

As for a helmet, we searched everywhere for something suitable that would be safe, strong, well-padded and light enough for the baby to carry on his head. We eventually bought the smallest hockey helmet we could find. We threw away the heavy plastic shell and stuffed the foam padding into a flour sack. After a few hours of sewing, we had a lightweight, safe, helmet with two long straps that held it perfectly in place. And it weighed a fraction of a commercial plastic helmet.

I don’t know how we got that load through airport check-in but we did, with an ounce and an inch to spare.

Taking the high road from Canada to France

How was the trip? It was wonderful. We flew from Calgary to Gatwick. Train to Newhaven and ferry to Dieppe. Then train to Bordeaux and the 85 miles from there to Périgueux. What a lovely spot!

And that’s where we started our cycling proper. We kept to 30 miles a day with lots of short breaks, usually in lovely little roadside parks with benches and fountains and manicured lawns. Mother would breastfeed baby on the grass in the lovely sunshine while I searched for bread and cheese and fruit and ice-cream in the local markets.

We found a hotel in Les Eyzies-de-Tayac, just upriver from the famous Cro-Magnon Hotel and cycled up to the wonderful Lascaux region to see the ancient paintings in the caves overlooking the river.

But the best part of the trip were the French. They love babies and they love bicycles. They would cheer us on at every hill, wave at Little Adrian on the back of the bike while he waved back, thoroughly happy. Mothers fed Adrian apples and plums and little biscuits, and offered us cups of tea in the local patio. And cars would stop to let our tandem pass. Amazing. Even in crowded Paris!

It’s funny the little incidents that you remember so well from a foreign trip. My wife was sitting in a roadside park in Périgueux changing Little Adrian’s diapers, looking more and more frazzled as she ran out of nappies and cleaning rags. Suddenly, we heard a huge dump truck pull up next to us with a hiss of air brakes, holding up traffic for a block. The driver jumped down from his cab, ran over, presented us with a roll of fresh toilet paper, ran back to his truck, climbed into his cab and drove off with a roar of the diesel engine and a cheery wave. Now, how often does that happen?

It was the same everywhere we went. Little Adrian and that bright yellow tandem opened the doors for us with everyone we met, above and below ground.

The guide in a local cave, an anthropology student from Paris, was so impressed with Little Adrian that he offered to show us something special. He took us over the barriers and far down the tunnel into the depths of the cave, stumbling over rocks and through streams with a dodgy torch to show us the one and only painting of a human that he had found. It was a half-naked woman with pendulous breasts, a fur sarong around her waist and a heavy black grid over her face. What an eerie picture. I remember it still.

But all too soon, the trip was over. We loaded Little Adrian and his luggage onto the tandem and cycled 35 miles down hill to Bergerac. Then we jumped onto the train to Bordeaux and Paris and home.

About Oliver Bertin
Oliver Bertin is a retired journalist, formerly with Canada’s The Globe & Mail.  More important, he rides a lovely late 80s Mariposa randonneur bicycle that is the envy of everybody on his street.  Little Adrian is now 40 and has two children of his own.  He still has the tandem and uses it to take his own kids on long rides all around the Isle of Wight, where he now lives.  He still uses the same baby seat Oliver built for him.