Within a few blocks we leave our sleeping neighbourhood streets and enter the lush green of the park. The spring air is thick with humidity. The houses are still dark, their inhabitants catching their final hour of sleep before the morning rush to work. Entering the park, and descending into the ravine, a symphony of birds chirp, and the sun burns orange as it pierces the darkness and peaks over the ridge. We’ll rise out of the ravine, to where the city’s buildings tower around the park. Their mirrored windows shimmer gold in the rising sun. We’ll thrash around the perimeter of sports fields before diving back into the woods. Rabbits hop for the bush with haste, as our beams of light shine in their direction. The slight clicks and whirr of our chains and gears break the quiet. The fresh cut grass, thrown from the wheels and wet with dew, sticks to our bikes and our shins. At times we chat while other times the pace lifts and we make no sound but that of our breath, which is laboured and increasing in frequency under the weight of the effort.

An escape into the woods feeds the soul. Humans are hard-wired to be outdoors in green space. Studies have shown that time spent in outside, away from the concrete and in the natural environment, will calm us, as it positively affects our mental and physical health. In built-up urban environments levels of stress and aggression increase, as do rates of depression and anxiety. Living in a massive city that is growing daily, the parks are a quick escape that provides the scenery, aromas and sounds, we need to find happiness.

Hundreds of thousands of inhabitants live around the parks in which we ride yet we see only a few dog walkers, and perhaps a runner or two. We share the serenity of the morning light, the beauty of the blooming forest and the aroma of life, with the scampering coyotes, the loping deer, the scurrying squirrels, the hopping rabbits and the splashing beavers. There is wildlife down in the park few people in the concrete buildings that tower around us know exists. This green space is our freedom from the noise.

Feeding the effort and finding our flow we fall into place, one behind the other, on the trails. Our bikes seem to glide below us, following the sinuous paths etched in the grass and trees. We touch our brakes as little as possible, we accelerate in unison, and we focus on the trail in front, the riders around us and nothing more. We react to the contours of the route, engaged in the moment. With focus we fly in the rising light.

Toronto is a city with an abundance of parks. With the right bike, there is another world to discover that follows the flow of the water in the ravines it has carved. On an all road bike, I see the city as a network of roads interlaced between the arteries of water that run from the north down to Lake Ontario. On the trails and paths we can cut through the city away from the drivers that have become so distracted, tense, furious, and malicious that it no longer feels safe, even to me, someone who has ridden for a lifetime on busy roads and amongst team cars in races. In the park the noise of the revving and roaring engines is a distant drone as the song of the birds and wind in the trees smothers it. In the canopy of green we reach the sublime. 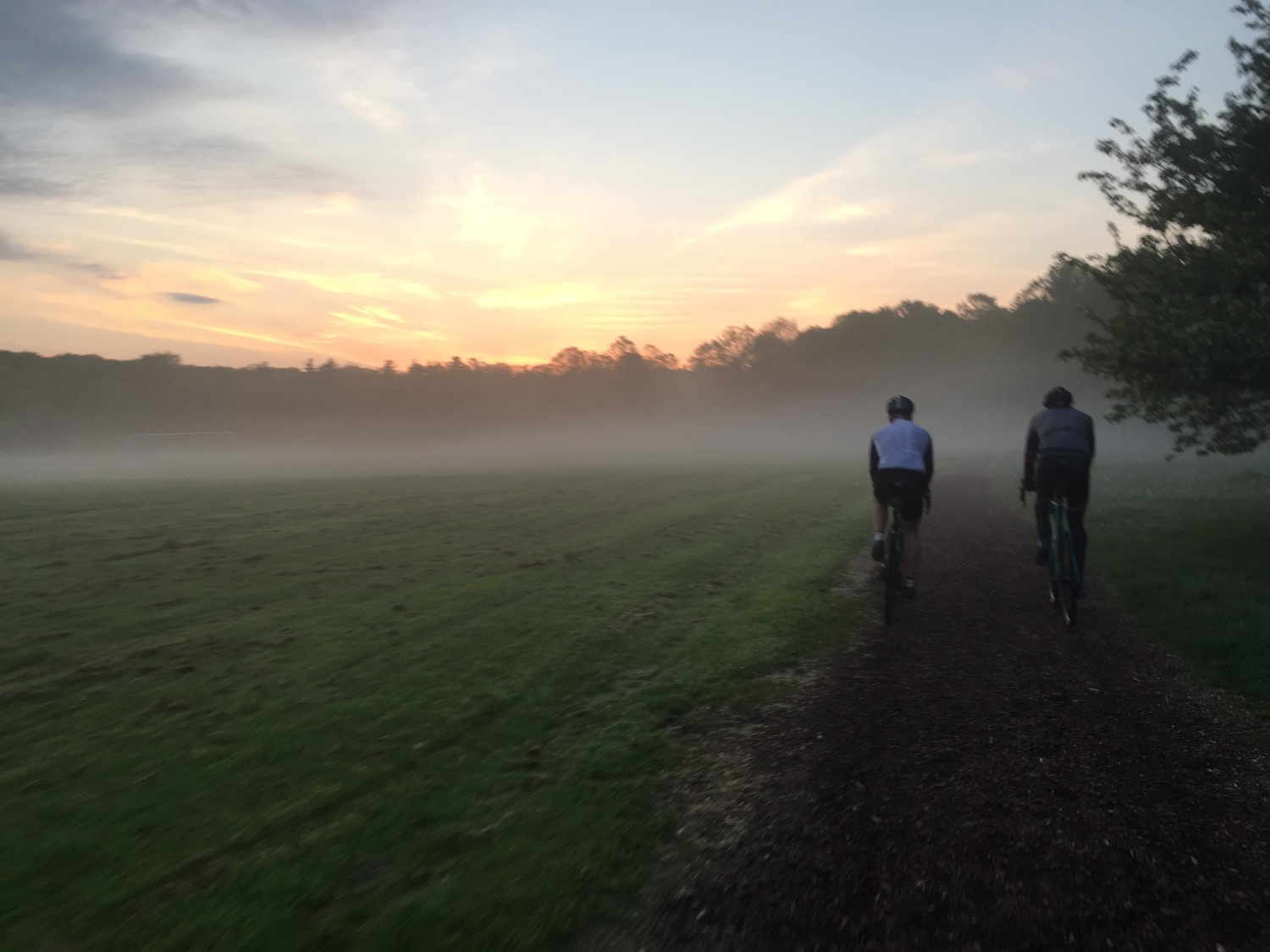 Misty sunrise on the fields of Sunnybrook Park 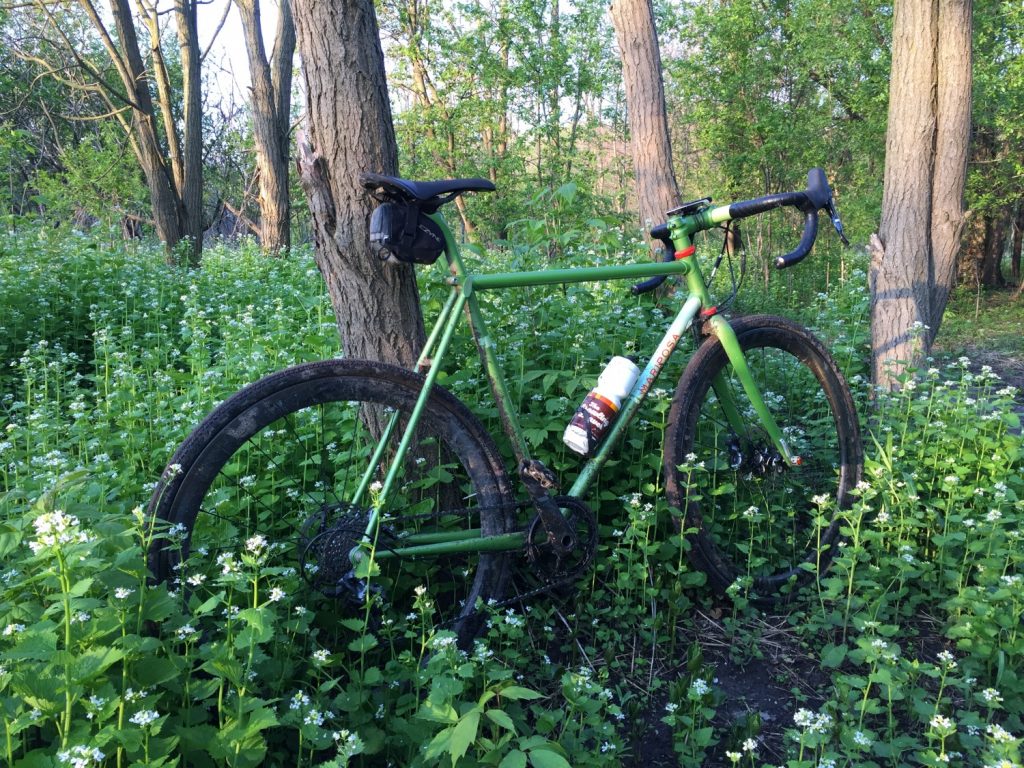 Sunrise through the trees and weeds 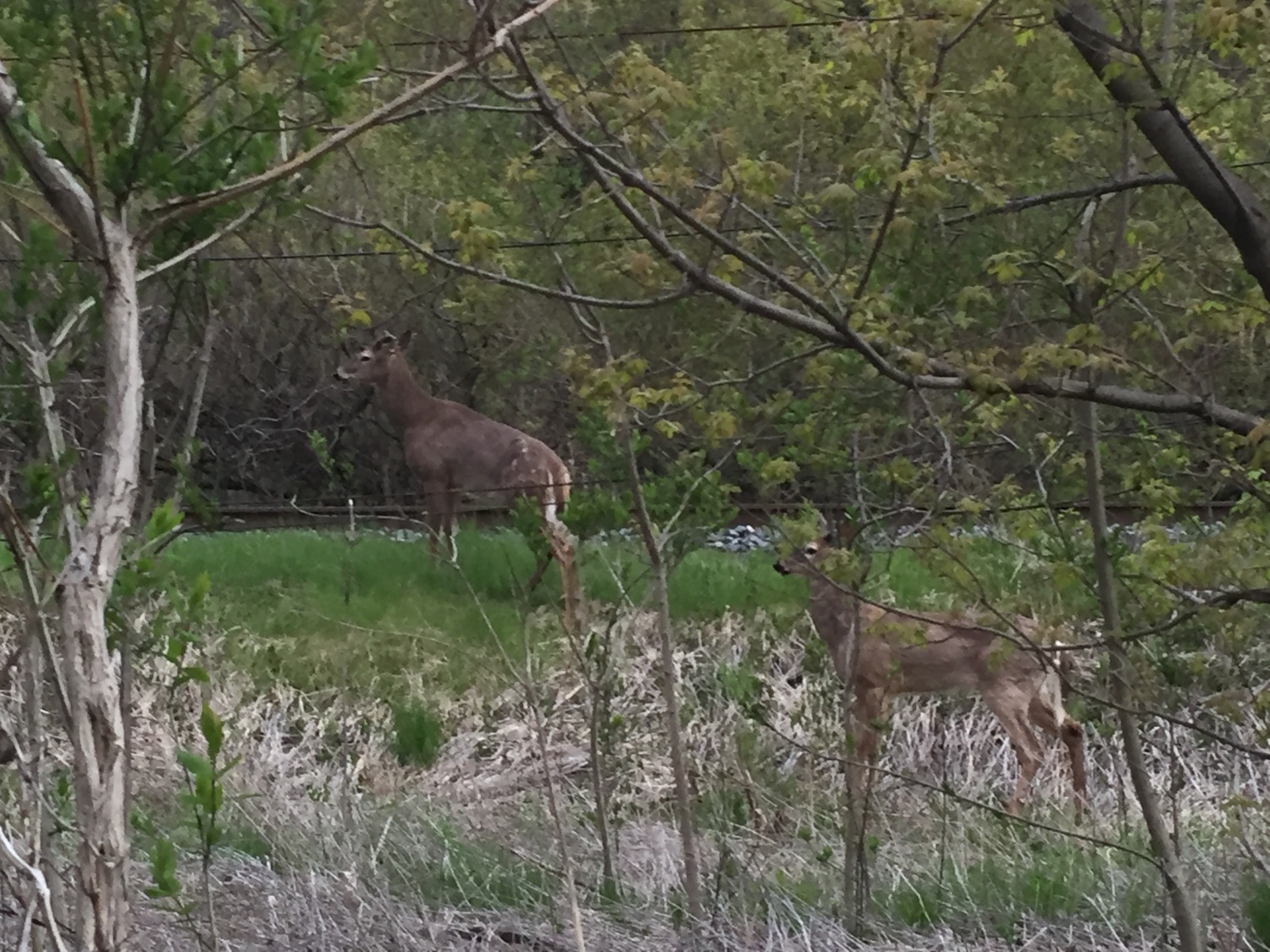 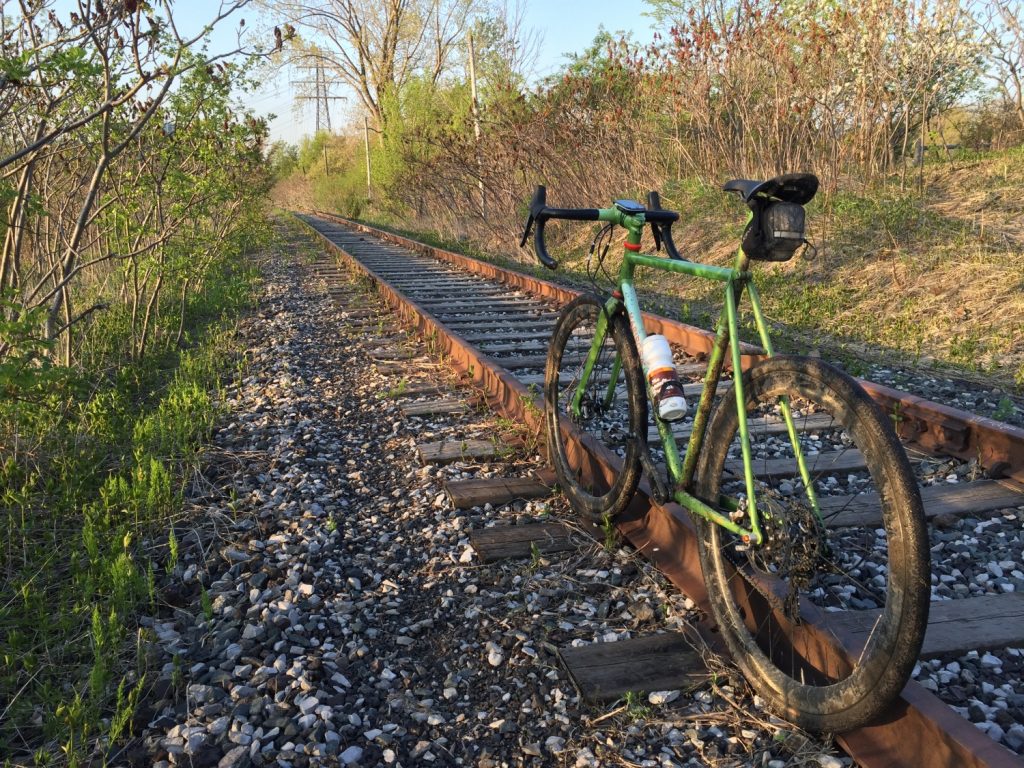 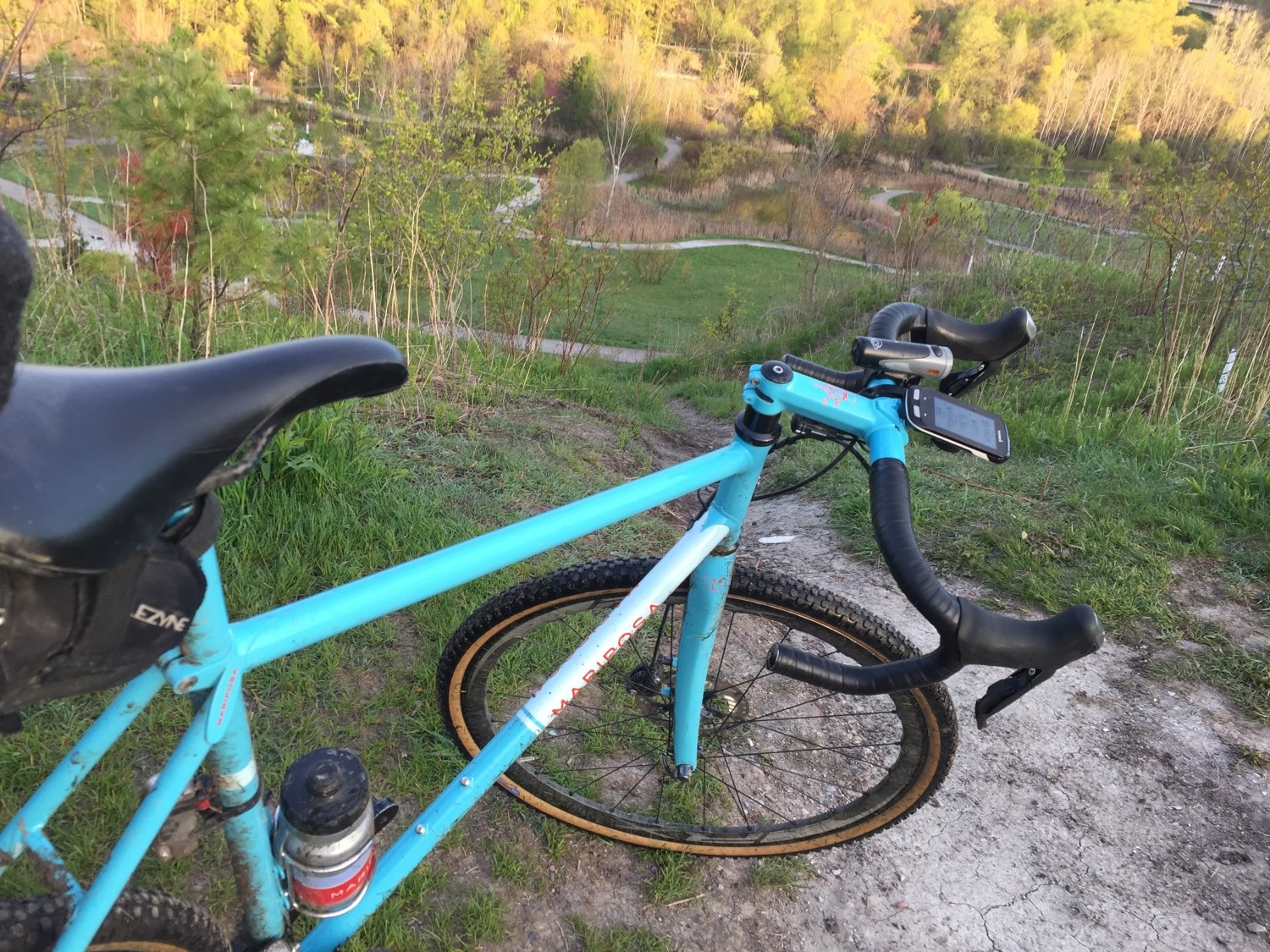 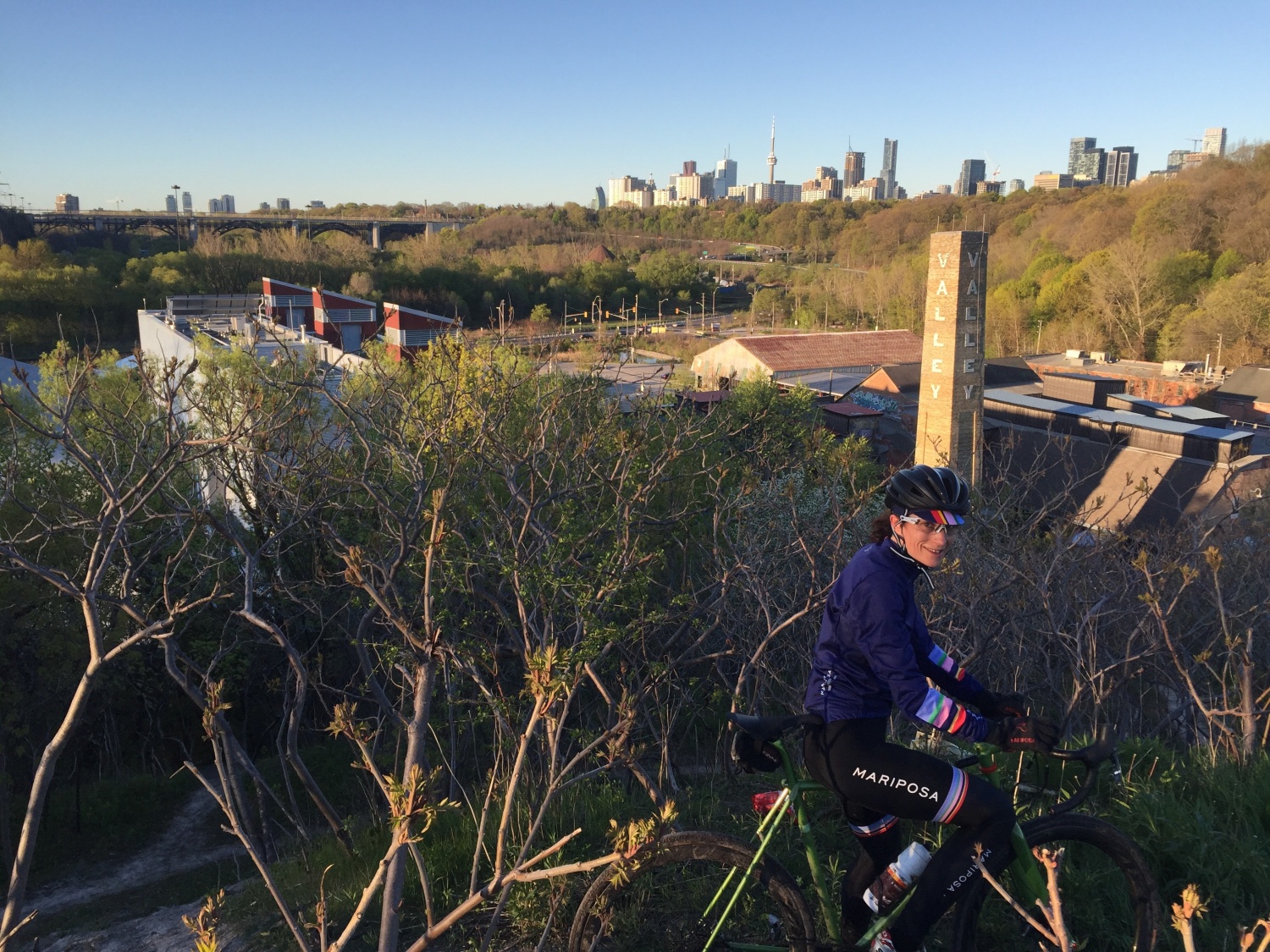