CAMPAGNOLO AND THE DOUBLE SPRING DERAILLEUR 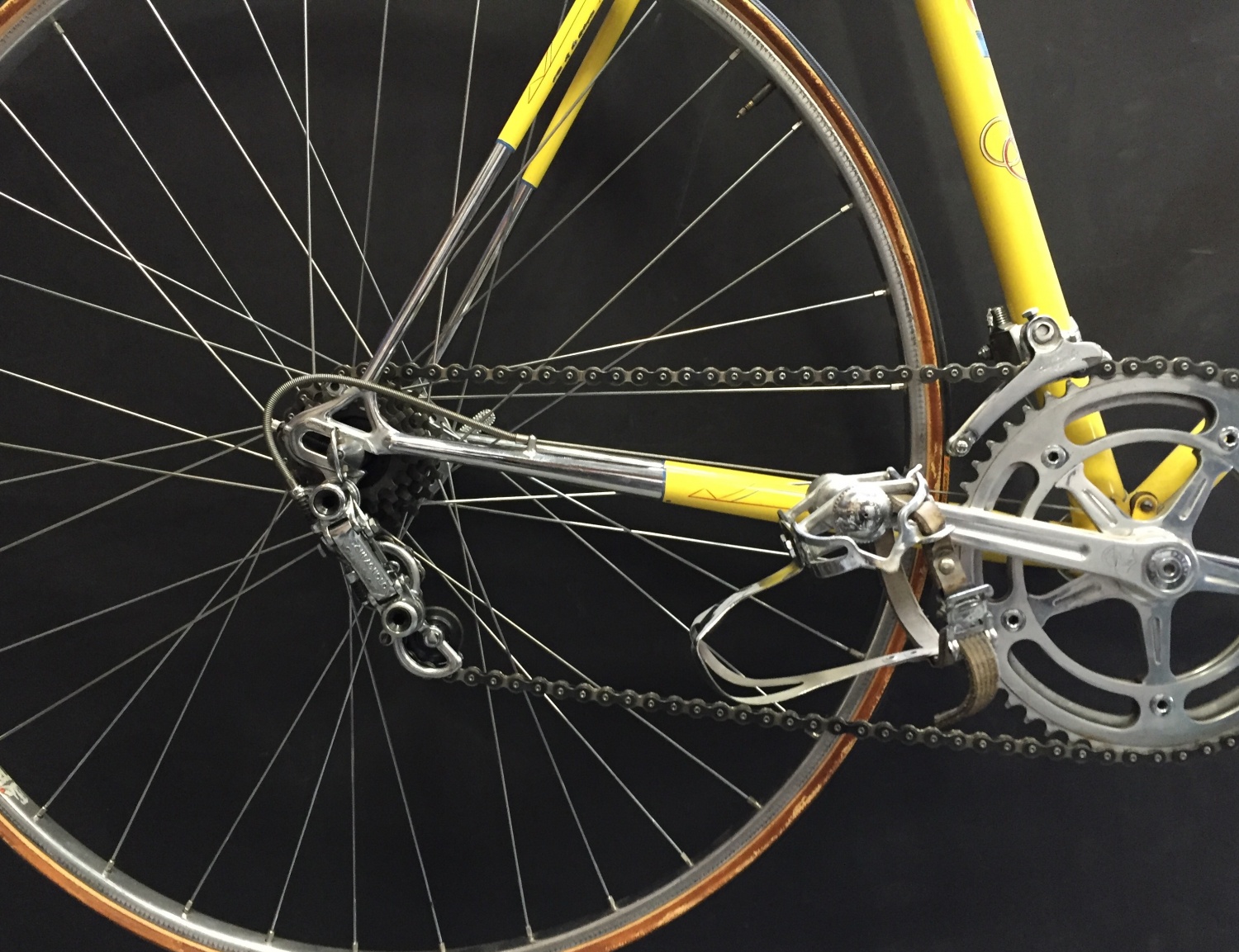 In 1951 Campagnolo introduced the first Gran Sport “deformable parallelogram” derailleur that revolutionized the derailleur industry. It was superbly made– arguably better made than anything before it. It was also three times the price of other derailleurs of the day. It worked well on the typical gear range of the time. Chain-rings of 50/47 and sprockets of 15-23 was common on racing bikes.

The Gran Sport still worked well when the racers demanded a bit wider range of gears– 52/48 and 14-24 became the norm right through until the mid sixties when an even still wider range of gears was demanded. The standard practice then was 52/42 on the front with 14-24 on the back. The wider spread of the chain-ring sizes required a derailleur that would accommodate the difference in tension of the chain. The Gran Sport would not do this so Campagnolo introduced the Record model that was essentially the Gran Sport with a longer chain cage.

The Gran Sport and Record had just one chain tension spring located around the lower pivot. The upper pivot was essentially a mounting bolt around which the derailleur could be pulled back to facilitate the removal of the rear wheel.

Simplex, at that time the largest producer of derailleurs in the World, always had both upper and lower pivots spring loaded on their racing models. The sprung upper pivot allowed the derailleur to move forward when the chain was on the larger sprockets so the chain-rings maintained a close coupling between the upper guide pulley and the sprockets. This close coupling made for a much more precise change. Unfortunately Simplex, also at this time, introduced their range of inexpensive Prestige Delrin (plastic) derailleurs. Although these were well designed and worked quite well they were cheap and came on the least expensive “ten speeds’ that, at that time, were in great demand. There were millions sold and most people knew Simplex as a producer of cheap plastic derailleurs. However Simplex made a large range of all types of derailleur. Their best and most expensive model was the Super LJ models, which, in my opinion, is the best non-indexed derailleur ever made.

Campagnolo persisted with the single sprung pivot. Why was that? Did Simplex have a patent on the double sprung pivot design? It was many years until Campagnolo was forced to put springs in the upper pivots by the demands of indexing. Shimano introduced the Shimano Indexing System (SIS), which revolutionized the industry. In Campagnolo’s scramble to catch up, they introduced Synchro shift levers, which were supposed to work with their existing derailleurs. They didn’t. They finally introduced derailleurs with the two springs when they released the Ergopower combined brake/shift levers in the early nineties. Simplex were dead by then.

Campagnolo did make two derailleurs with two sprung pivots during this period: the touring model Rally and the C Record. Both models were discontinued after a short period and replaced with single sprung pivot versions. Did Simplex see an infringement of their patent?

I was able to drill out the rivets on both derailleurs, turn up some new bushings and rivets
and assemble a ’53 Gran Sport with springs in both lower and upper pivots. The “new” derailleur works well, certainly better than without it’s upper spring.

I am sure that I am not the first to make this modification. It is quite easy to do. Some engineer at Campagnolo must have thought of it back in 1953, especially as all the parts were available to him. Did he know about a Simplex patent? There were a good number of derailleurs available then, none of which had the two sprung pivots.

As an aside the Campagnolo Sport derailleur has often been derided as useless by some cycle component historians. It in fact was a model that filled a large place in the derailleur market. It had a very limited range being aimed at the European city bike market. These bikes would typically have a three or four gear range of 16-22 teeth. The Sport was ideal for this and even today one can see bikes in Italy with these derailleurs giving reliable service after sixty years on the road. 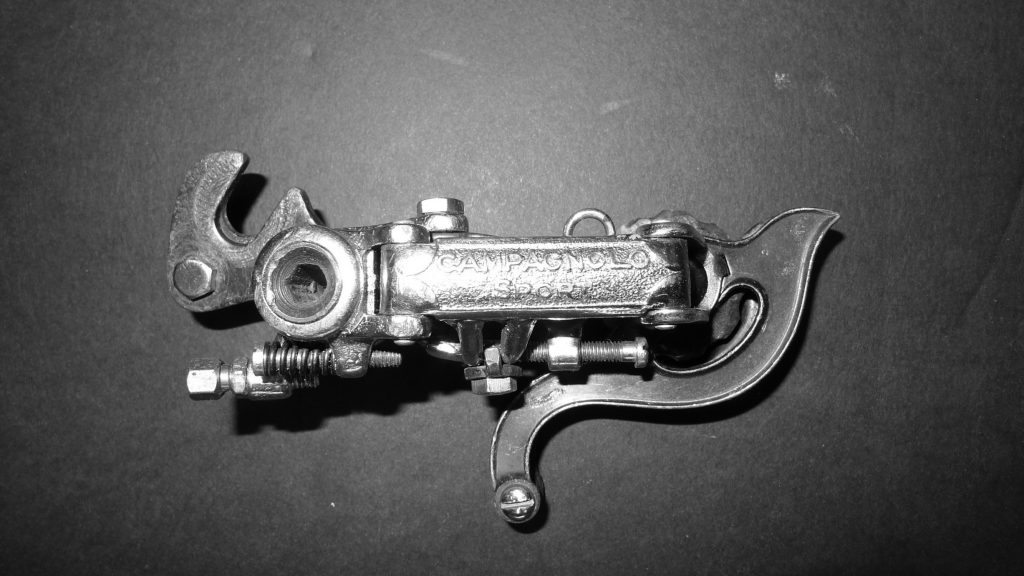 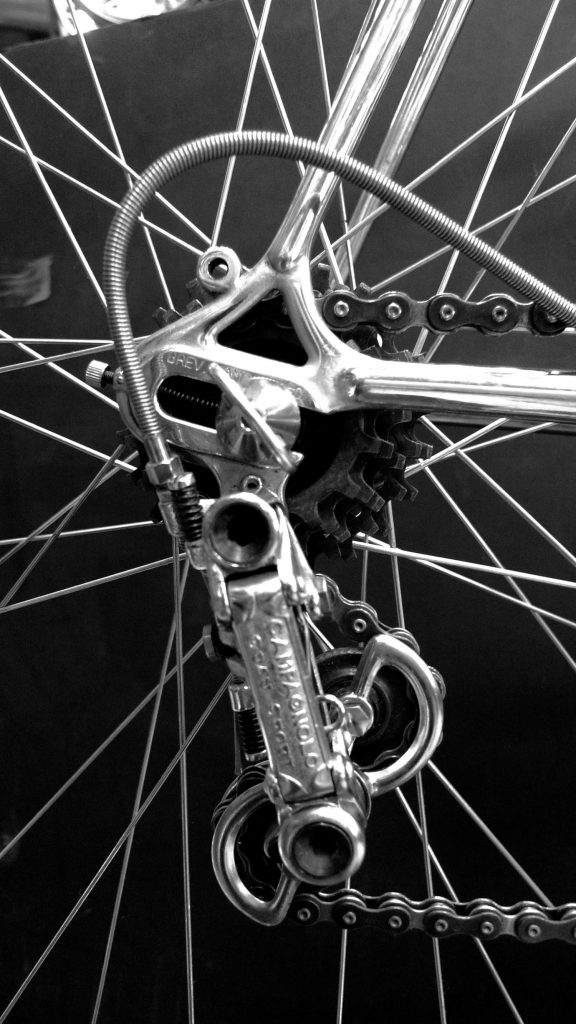 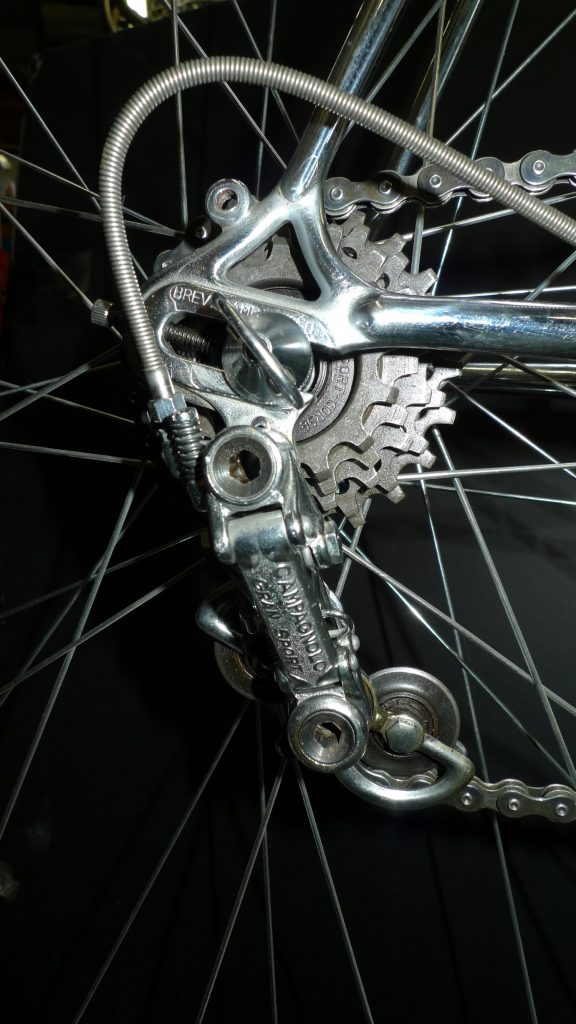 1953 Campagnolo Gran Sport derailleur with chain on the large (!) sprocket and large chain-ring. Note that the upper pulley is pulled away from the sprocket which hinders the smoothness of the change. 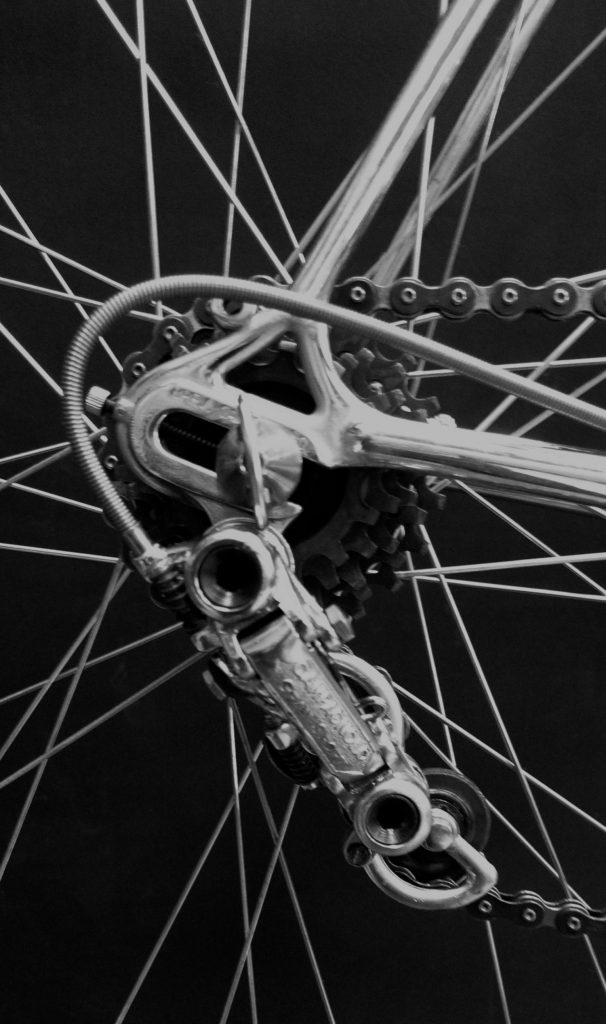 Modified Campagnolo Gran Sport derailleur. The upper pivot casing has been replaced with that from the Sport model and it’s contained spring. Chain on the large sprocket and chainring. Note that the derailleur body has been pulled forward allowing the upper pulley to be much closer to the sprocket improving shifting.