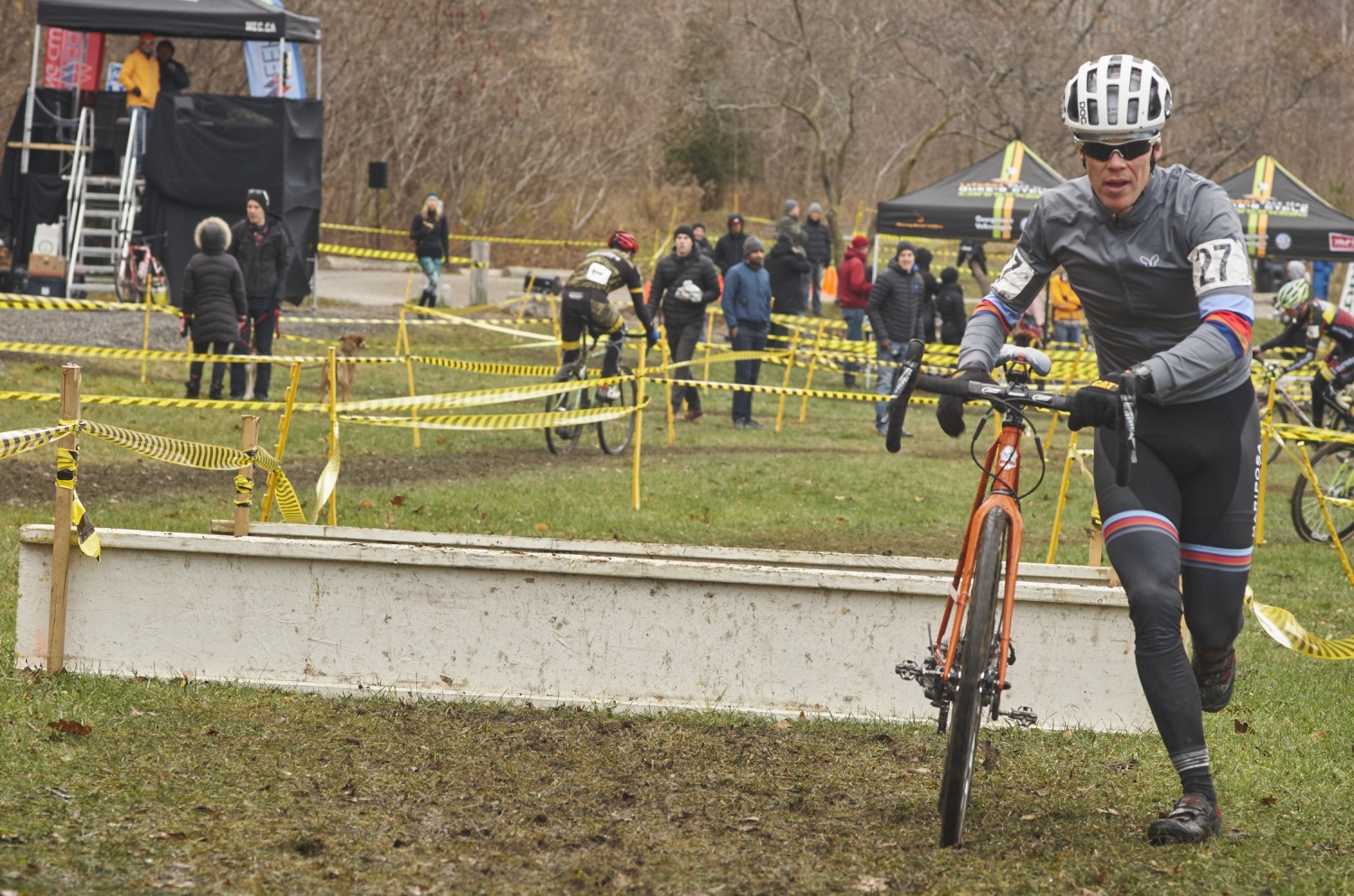 A good cross bike needs to plough through mud and float across frozen bumpy fields. Up in Canada, where the cold hits early and lasts until late March, the cross season is just over two months long (but that doesn’t mean we don’t keep riding CX through the depth of winter—we just don’t race). Due to the compressed season, I try to get in as many rides and races as possible: a long commute to and from work, a race on Tuesday nights, an early morning training session at 540 am (ouch) on Thursdays, and the Ontario weekend races. In the last few months, since my first ride on the Mariposa SRAM CX1 bike, I’ve had the opportunity to test the bike in all conditions: I’ve jammed over sandy dunes, thrashed across grass fields, snaked my way through single track, ridden it on the road in the mountains, and, most importantly ploughed through sticky mud. 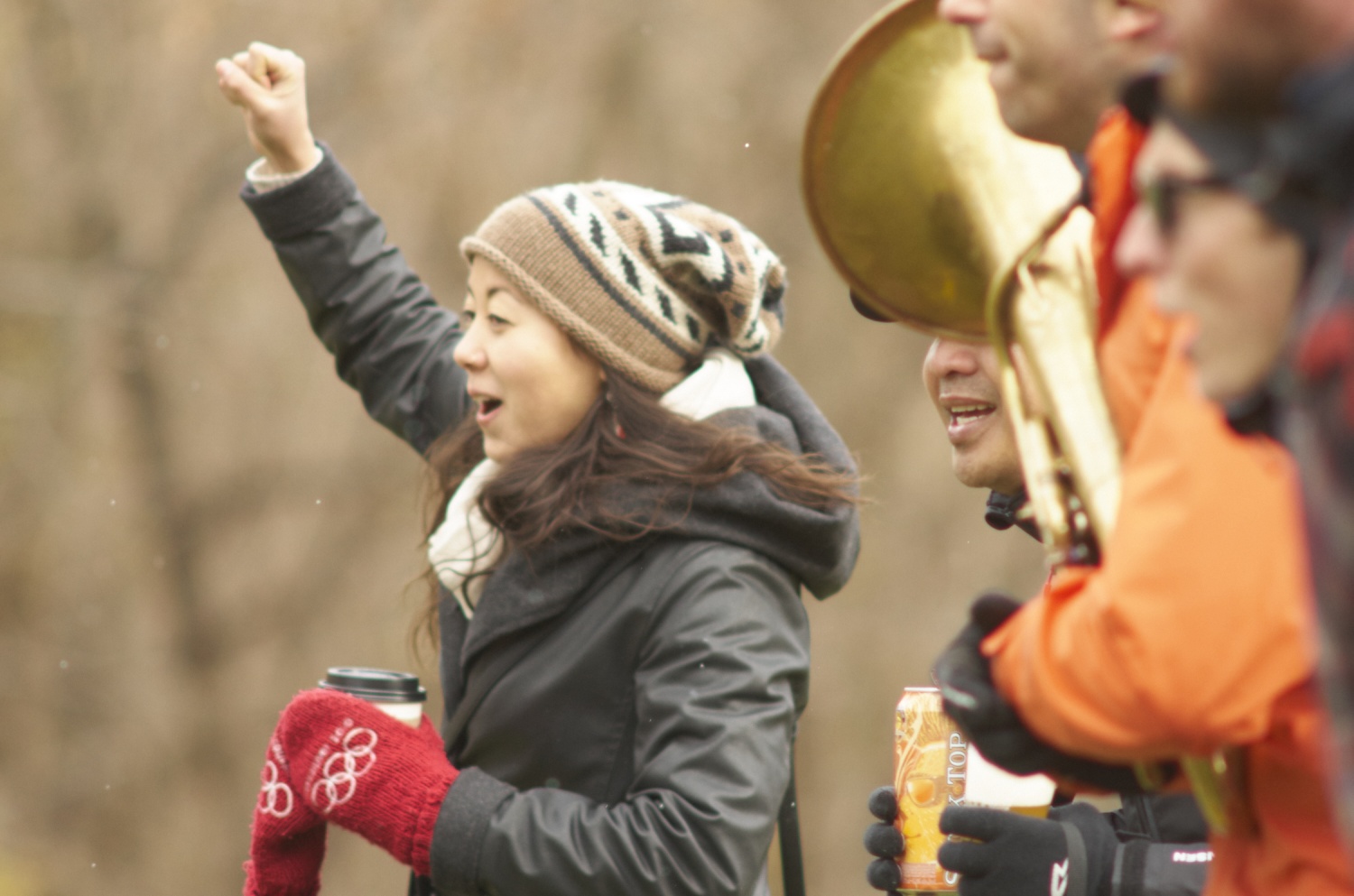 The last few races I rode, the Subway Cross in downtown Toronto, and then an event in Greenville South Carolina, were wet and slick. The Subway Cross in Toronto’s Humber valley is usually muddy which attracts animated fans. It’s been abnormally dry this year, so the course, though slick, was limited to one muddy section due to a bit of rain the week before the race. As the mud was on a hairpin corner it was a challenge to ride. I was surprised at the handling of the bike. The front centre (the distance from the bottom bracket to the front hub axle) is not too short, so it’s possible to pedal easily though the tight corners, which is critical in cross racing. There was one significant climb and descent. The descent was slippery with a tight line between a sewer grate and an off-camber muddy slope. You’d have to slow down a bit to thread the needle on that section. This is where I noticed a big difference between disc brakes and cantilevers. The discs always feel the same in terms of modulation and power. With cantis, when the rims are wet, you need to wait for them to grab before slowing down. But, most importantly, the bike didn’t get bogged down with much as the race progressed. 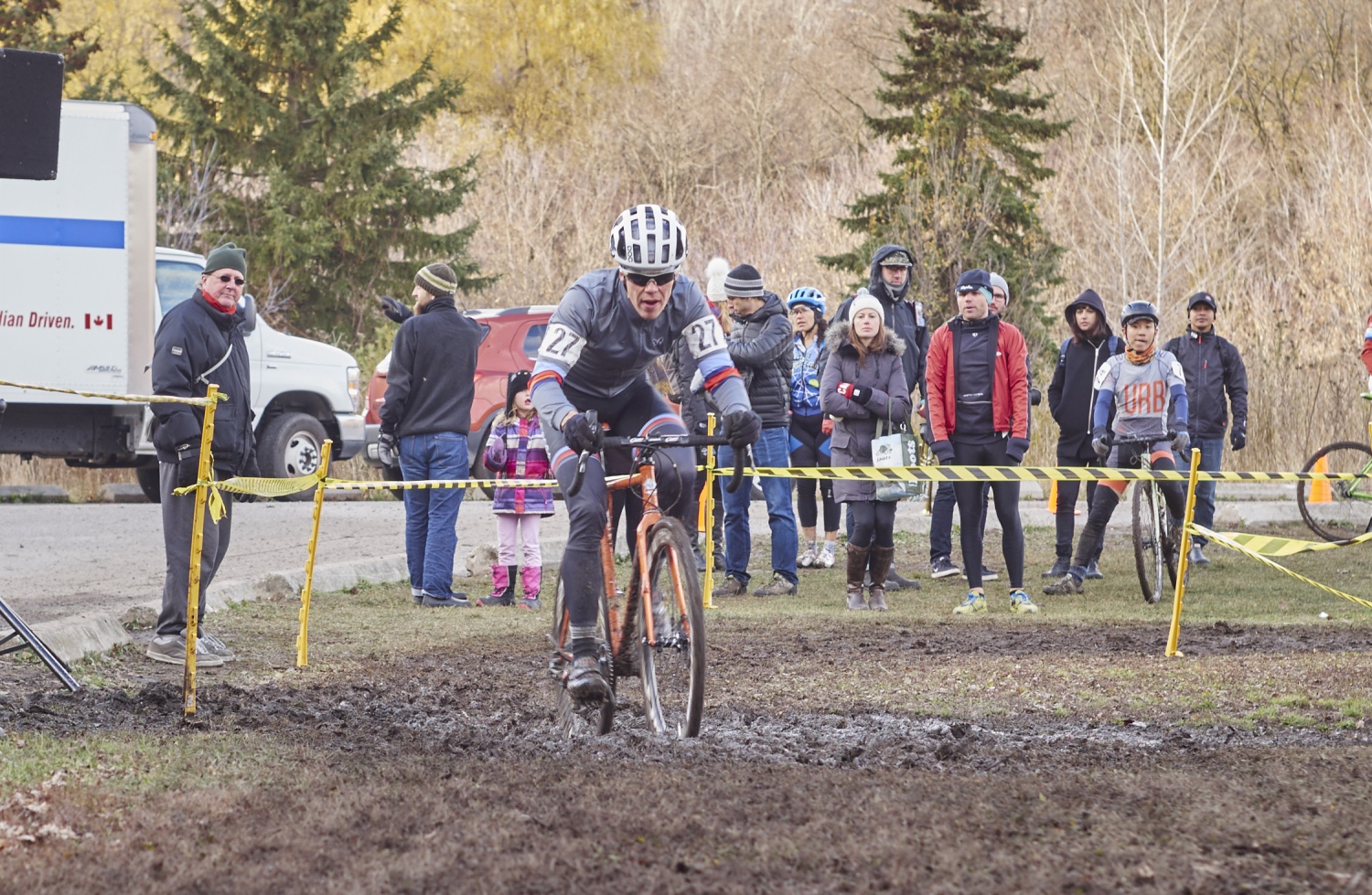 Over the years, I’ve had a few bikes and have seen many, that didn’t have enough clearance in the back end of the frame or in the fork crown to clear out mud. If the bridges are too close to the wheel, or are too large and bulky, as on some carbon frames, the mud will quickly pile up and bog down rider’s progression. Likewise, if there isn’t enough clearance in the stays mud will cake up. There is little more frustrating when you’re pedaling like a mad man in pursuit of a finish line than a bike that doesn’t want to roll. 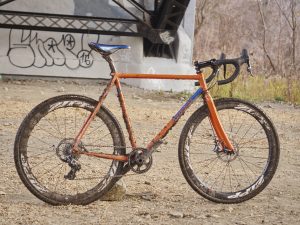 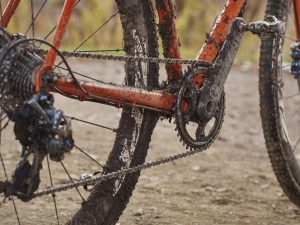 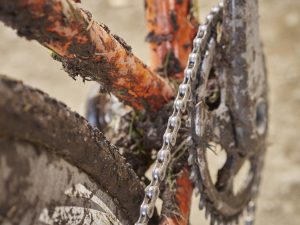 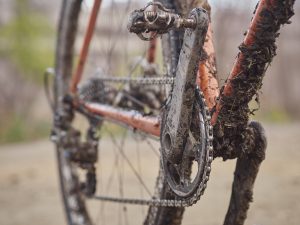 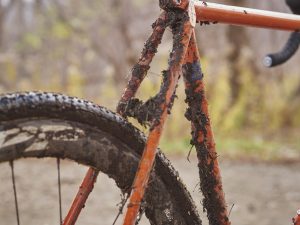 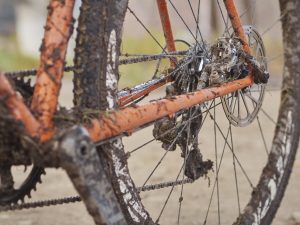 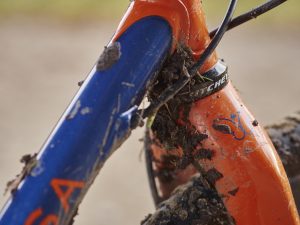 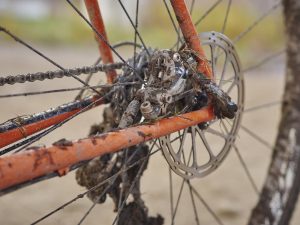 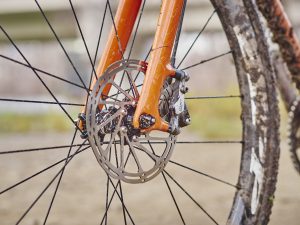 In mud the Mariposa shines. The tire clearances in the frame and fork are plenty, so mud build up is not a factor. The SRAM single ring setup is clean, as there isn’t a front derailleur to collect dirt, twigs and grass, or jam up. The disc brakes are clean and performance is not affected by mud and water as with most cantilevers. The brakes are reliable, and work as well as they did when I first installed them.

At the start of the race in Greenville, it was warm and dry. But, half-way though the hour long race, it started raining making the fallen leaves treacherously slippery. Midway through the race, when you’re fatigued it is easiest to make errors due to fatigue–you’ll put a foot down at the wrong moment losing precious seconds, or slip, fall and crash. A benefit to disc brakes is that they are easy on your hands and arms because they don’t require a lot of force to operate, which helps you stay focused on riding rather than braking. The sealed hydraulic cable doesn’t get packed with mud and water so it keeps working in the slop. I was happy to have the single ring again on this technical, mountain bike style course–one less thing to go wrong when shifting under pressure.

To protect the gear cables, the frame was designed with the rear cable running through the downtube in a full length of housing. The full housing keeps dirt and water out and did not need maintenance during the season. The rear brake line is routed through the down tube as well, allowing for easy grasping of the top and down tubes when lifting or shouldering the bike.

In the mud, or over bumps, you want to be able to firmly grasp the bars and control the bike. The bike should feel as though it is an extension of your body. The hoods are a nice ergonomic shape, and have a secure hook to keep your hands on them. Shifting the CX1 single lever is crisp and easy, especially because you only need to think about changing the rear gears. 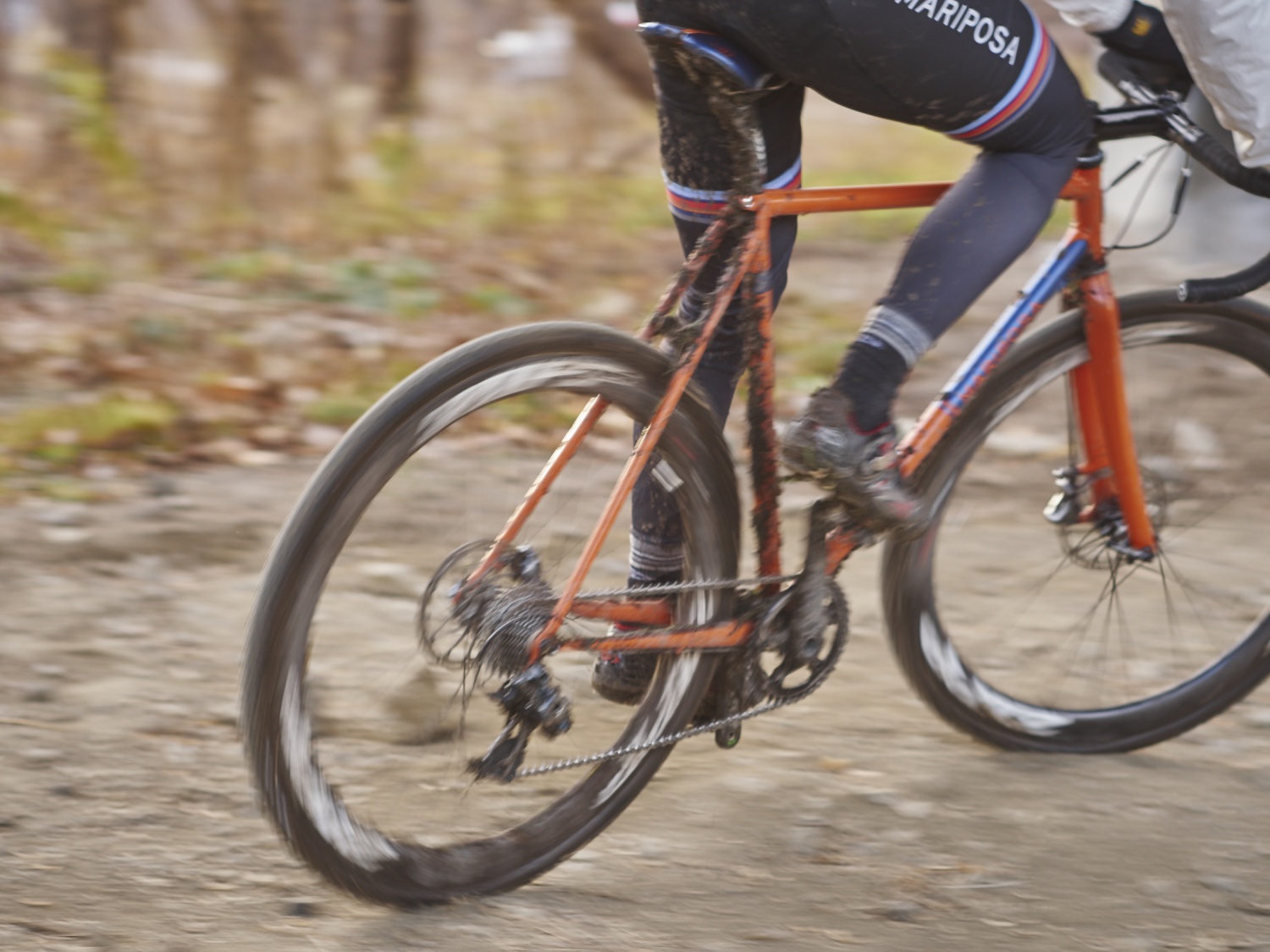 The frame was built with custom geometry to fit me. It’s the same size as my road set up, with less head angle. This allows for a longer front-center so there is no toe overlap, even with fat tires. Touching the front wheel with your toe on a tight turn is both frustrating and dangerous. Also, the Mariposa has a level top tube, which is something rarely seen on modern road bikes with compact geometry but still common on many top level cross bikes. With a level top tube, the frame is easier to grasp when jumping over barriers and it also makes it easier to shoulder the bicycle for long run ups.

Over rough fields, the steel frame is stiff but gives a little over bumps and through mud. This keeps the wheels on the terrain rather than skipping through bumpy corners like stiffer bikes do. And, it left me feeling less beat up over an hour long race—my back and neck didn’t ache.

After giving the bike a good thrashing for a few months, I now know this is my ideal bike.