SHADOWS ON THE ROAD – Prologue 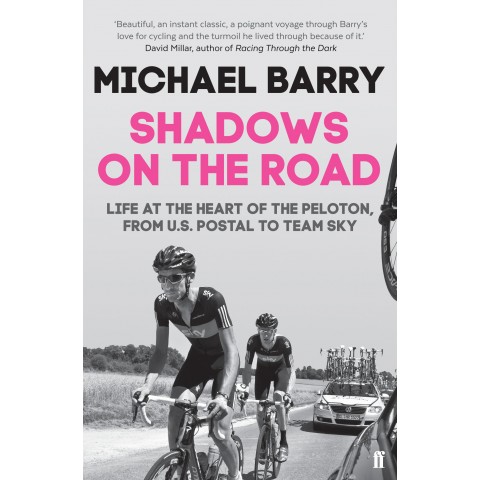 The phone rang at the arranged time. The caller ID matched the number on the email. This was the call I had anticipated for nine years. One I knew would forever change my life. It rang twice. I answered as I turned down the radio. My wife drove, and I sat in the passenger seat of the minivan, with our children in the back. A dinner date had been planned with another family on the Toronto waterfront.

Only a few hours earlier, I had announced my retirement from professional cycling. For two years I had considered whether or not I should stop but with time the decision became easier. Weeks on end away from my family, the crashes, the injuries and the resulting anxiety had become too much. But I kept going, as I wanted to be sure I was making the right decision and I feared giving up a passion and a dream I had pursued since I was a small boy. I loved being on my bike, but the demands of the job had eroded my will and crushed my body.

Soon after publicly announcing this would be my last season and the coming races that weekend in Quebec City and Montreal my final races in Canada, I started receiving emails of congratulations
for a long career racing at the highest level. Then there had been that email requesting a phone conversation.

The car seats held the warmth of the hot summer day and the air conditioning blasted as it battled to lower the temperature. Our boys had just finished a day at summer camp, and I had been training all day, my final hard session before the races on the weekend. The visible veins in my legs, a sign of my fitness, the hard training session and the dehydrating heat, lined the thin skin like the rural roads on a map of France. The scar on my arm from recent surgeries after two heavy crashes had turned red from hours under the sun, and the titanium plate beneath the scar made it tender to touch. Six weeks after the last surgery, the broken bone still ached. My forearm bulged, slightly swollen from a screw head rubbing on tissue. Like a cat licking a wound I massaged the scar while I held the phone between my shoulder and ear.

The car descended into the valley, along the Don River. The hill we drove down, I had ridden up daily as a boy, timing each ascent. Back then, two minutes and forty-eight seconds was my fastest ascent. The valley hadn’t changed much in twenty years. There were a few new buildings on the ridges. The landfill where motocross riders once tore around had grown into a green park where dog walkers strolled with their pets. The old pulp and paper mill and the skeleton of an abandoned housing project had been ripped down, and the chemical aromas of 1970s and ’80s industry that wafted off the river had been replaced by more natural scents. But otherwise it was all the same. On the bike, I often pass spots I have seen since I was a boy. I even recognise markings on the road, unchanged in decades. Our lives take turns, we age, we leave and we return, we win and we lose, but many of those spots remain identical and somehow provide comfort. On the phone, knowing nothing in my life would ever be the same, I looked out the window at the valley that had been a part of me since I was a boy, and I felt oddly calm. My life was about to take a direction that I had fought to avoid, yet I knew I would inevitably face it. I’m not sure we can ever escape our lies, errors and sins. Even if they don’t become public, they will haunt us and devour us from within. There was emptiness in my stomach and nervousness in my voice as I answered the call, but these symptoms had not been triggered by fear of the consequences. I was willing to accept the consequences. I was concerned about the complexities that I didn’t yet know how to handle. I had no idea how it would all unfold, but I had faith that good could come, as it always does, regardless of how challenging the path.

The conversation was short. Bill Bock, the lead lawyer in the United States Anti-Doping Agency (USADA) investigation, politely introduced himself. He was calm, his words were succinct, yet friendly. Dede put a movie on for the boys, to keep them occupied and quieter while I was on the phone. In the background Lightning McQueen chattered and revved his engine through the speakers. Mr Bock explained that he knew I rode for the US Postal Service cycling team, and understood I was involved in the use of performance-enhancing substances. He listed the substances, erythropoeitin (EPO), growth hormone and testosterone, and said he was told I had used them from 2003 to 2006, the years that I rode for the team. I said little, other than perhaps a yes or an okay. He asked if I would like to co-operate in their investigation and if they could meet me in the next few days. It was my choice either to co-operate or to continue to lie. I agreed to testify, but explained I was scheduled to race in Montreal. They could meet me there. Mr Bock then explained that the other riders
involved had lawyers to represent them, and that I might want to contact one as well.

I had doped during a period of my career and had used the substances Mr Bock listed. To avoid being caught, I had lied. When an ex-teammate, Floyd Landis, publicly said that we had shared EPO, I denied the claim and called him a liar.

The investigation into Lance Armstrong, my ex-teammate, and the US Postal team had been ongoing for two years, beginning shortly after Floyd admitted to doping and made allegations against the team. This was the first time I had been called for testimony directly by the US agencies involved. With a looming deadline, it was now the final stretch in their investigation.

The harbour was calm. A few boats sailed near the port. Two kayakers paddled under a bridge and into a channel. The late summer sun was still hot, but there weren’t many people by the water. The club where we’d arranged to meet our friends was a short boat ride from the harbour, on a small island. The ride on the ferry calmed me. Our boys fought to sit on the boat’s benches. They bounced in their seats and laughed with their friends as we pulled away from the pier. We were only a few hundred metres from the heart of the bustling city, but the island was serene, and the hum of city traffic faded under the squawk of the gulls, the lap of the waves and the rumble of the ferry’s diesel
engine. With my family and our friends, the turmoil inside my head subsided. I wanted to hold on to this moment until I knew how to deal with the future.

Like all of us, I could never have predicted the path of my life. As children, we set off in pursuit of our dreams. Some of us achieve them, others abandon them for more immediate goals. Sometimes we give in too easily to the mundane routines, the pursuit of wealth, the acquisition of chattels and the expectations of a society in which the only success is victory and the only distinction is performance. I gave in many times to the forces of conformity. But there was always an even greater desire that drove me further.

I’d spent my life playing, training and racing on a bicycle. I was fortunate to have had the opportunity to pursue a childhood passion. I chased my dreams. I loved being on a bike, and I made a living doing it. Cycling took me all over the world. I travelled year-round, often to exotic places. I had my parents’ unwavering support when I was a boy and later, when I rode for the leading professional teams in the world. Through my career I earned a reputation as a trusted domestique – support rider – and I helped many top cyclists as they raced to victory in the most important professional competitions of the season.

A love of riding, the liberty of going distances at speed, alone or with friends, pushed me to get back on my bike when, perhaps, I should have given up. I’d felt the same emotion on the bike today as I’d felt as a boy when I first learned to ride. That emotion carried me to places I would never have imagined, drove me to do things that were wrong, crushed me, matured me, challenged me every day, cemented relationships, and informed my life’s pursuit.

Stepping off the ferry, my foot pressed against the step and my muscles flexed under the load. On a bike, I felt fluid. On land, I felt uncomfortable and my movements felt abrupt. In every way, I was a competitive cyclist. The cleanly shaven legs, the tan lines on my arms, legs and neck, the scars, the skeletal physique: these were the physical signs that I rode a bike. Internally, it was even more evident, but only to me and perhaps my family.

The boys and their friends leapt off the boat and raced ahead of us, running on the lush green grass and daring each other to run through the sprinklers. The bounce in their strides was everything mine lacked, having been drained by my training sessions. Watching them run in circles, touch the water and leap back to avoid soaking their clothing, I wondered how I would tell them, and how they would deal with knowing their father had cheated. The people closest to me would be the hardest to tell. I wondered how they would react and if they would ever forgive me. I hoped that, through my testimony and through the USADA investigation, these kids would never face the same realities as I had or have to make the same decisions as I did if they wanted to become professional cyclists.

I still loved to ride. Racing had worn me out, but cycling had kept me going. It still does.

To read more, SHADOWS ON THE ROAD can be purchased here