This Mariposa touring bicycle made for Dan Bereskin in the mid-1980s, and restored about 12 years ago and it is now for sale!  Dan recently shared this story of his many adventures on this bike.

I became keen on cycling in France during the 1980s, and it was then Mike made this triple chain ring bike for me.  I used it to ride the five mountain brevets sanctioned by French Cyclotourisme Association, the BRA, Pyrenees, Jura, Midi and Alsace and was given a certificate indicating that I was the first person from North America to complete all five brevets!  Each had a minium longitudinal distance of 220 km, and minimum climb of 4200 meters.

This bike also was used twice in the amateur version of the Paris/Roubaix.  The first time, I was annoyed that the French riders did not use fenders, which meant I was soon covered with mud.  Then I realized that on muddy sections, the mud clogged the fenders to the point you couldn’t crank the pedals.  So, I twisted the mudguards off the bike and continued.  Unfortunately the strain had damaged the derailleur to the point I had to push the bike to a nearby farm and commandeer a hammer and nail, to enable me to convert the bike to a single speed.  I continued like that until I saw a procession of vans leaving the route with riders who had abandoned.

Still having about 50 km to go, I asked myself, are you crazy?  The answer was yes, so I flagged one of the vans and was driven to Roubaix.
The second time was more successful, no fenders and  I arrived at Roubaix with no issues.  I wrongly decided to try the angled track, which I found was OK if and only if you could ride faster than I was able, so I took the flat sissy route around the track.  They did give me a trophy consisting of a piece of granite and a stand marked Paris Roubaix Cyclo which is a treasured souvenir.

Eventually I sold my home in the suburbs and after moving to the city in the early 1990s, I stopped riding, so I gave Mike my two Mariposas to sell, which he did.  Mariposa Bicycles sold Dan’s racing bike a couple of years ago.  When I told Mike I missed my touring bike, he said, I have it.

The person who bought the bike crashed it, broke the top tube, and never came back for it.  So, the frame was hanging in the Mariposa Bicycles – Bicycle Specialties Ltd. shop for years before I enquired. 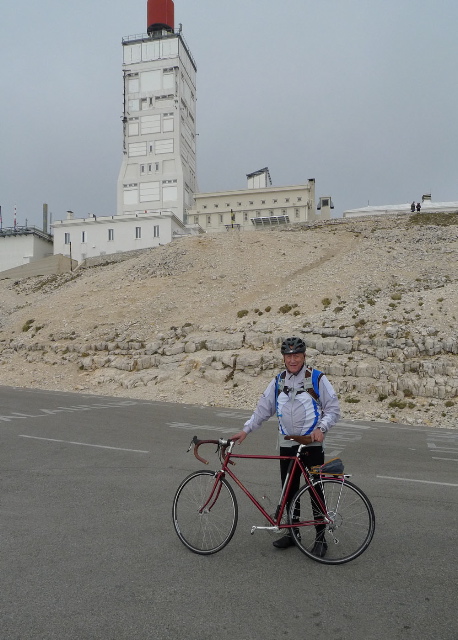 Bottom line, Mike fixed the bike, it was painted a nice burgundy colour, and fitted with components suitable for the mountains.  I used this bike to climb Mt. Ventoux twice.  The first time, in the 1980s, I rode from a town across the river from Aix en Provence to Mt Ventoux, climbed it, decended and rode back.  The second time I was in my late 70s and a bit more careful, so I rode from a nearby town, climbed Mt. Ventoux and met Rhoda at the top, who drove me and the bike back to our hotel!  I didn’t trust my reflexes decending at 60-80 km/hr! 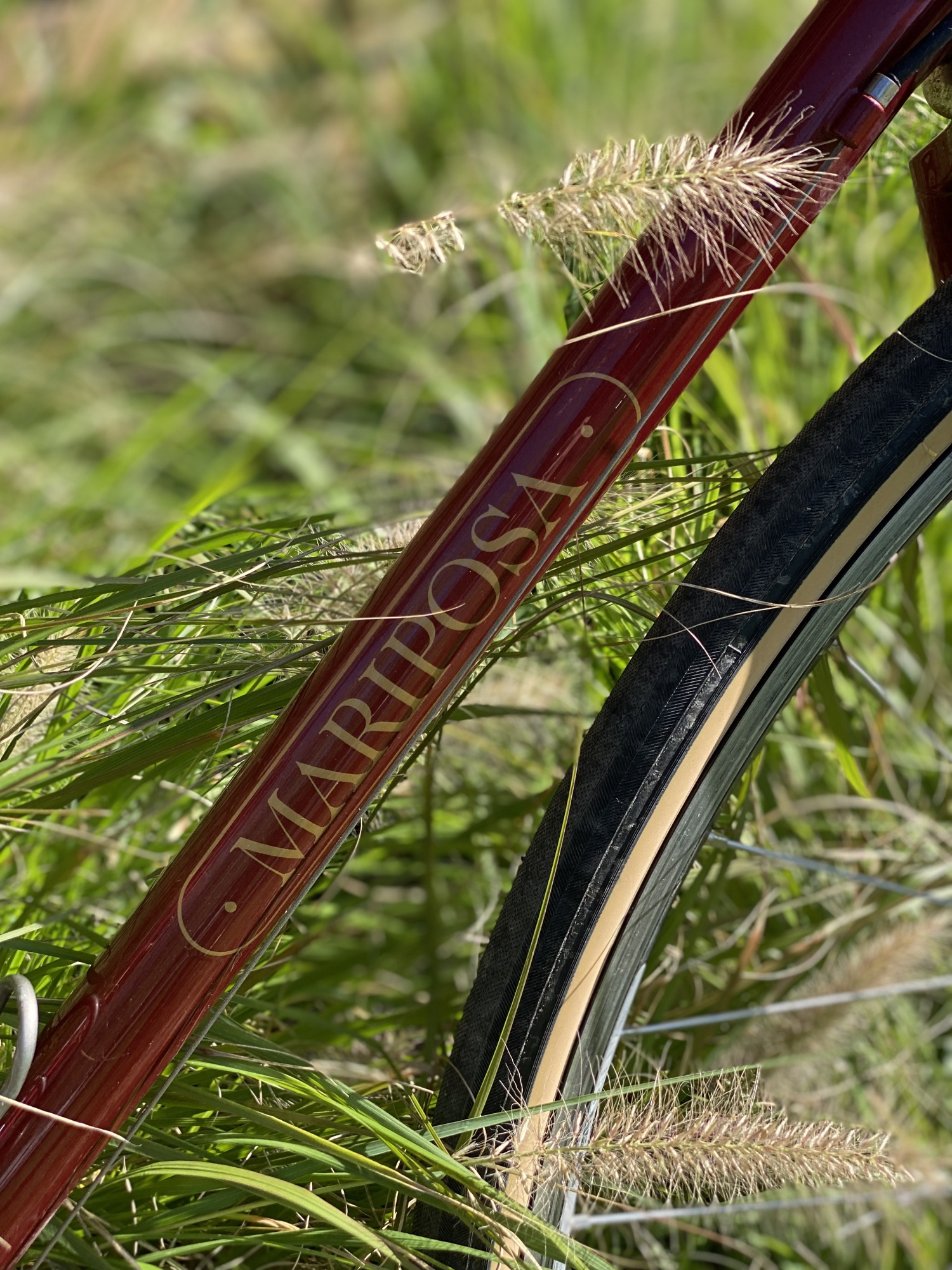 This frame and fork was built in 1983.  It was repainted in 2009 and the groupset was uprgraded at the time with a Campagnolo Record 3 x 9 Record groupset.  This frame has custom, handbuilt rear carrier, braze-ons for front low riders and eyelets for fenders. 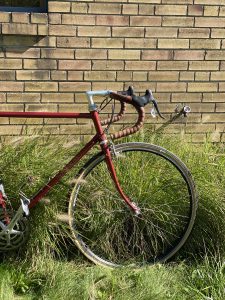 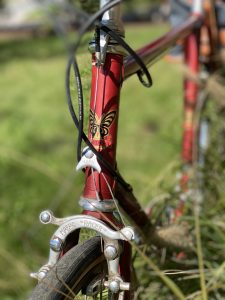 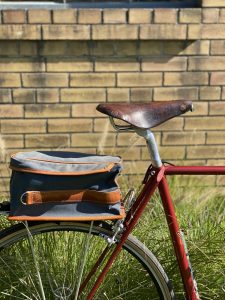 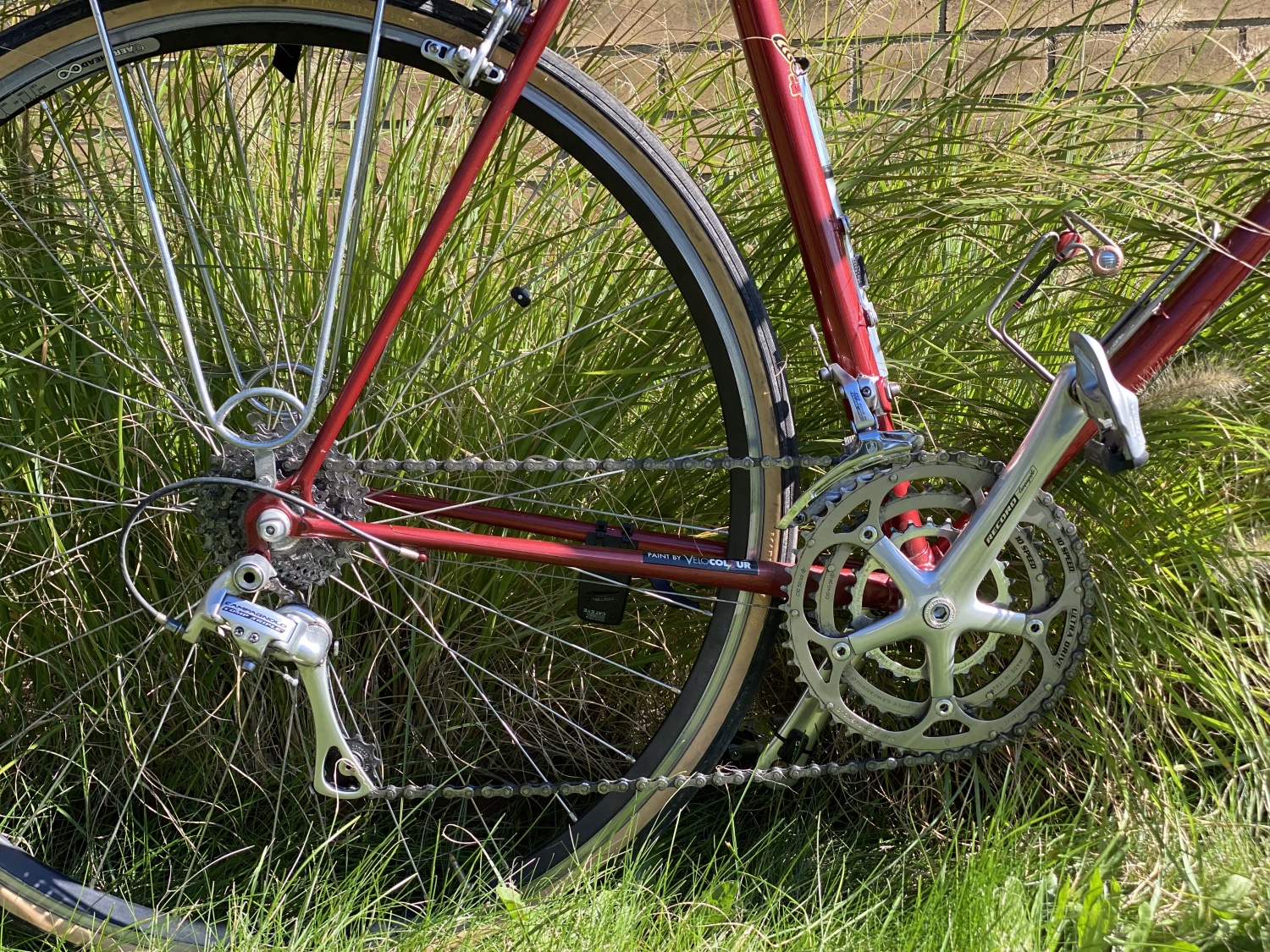