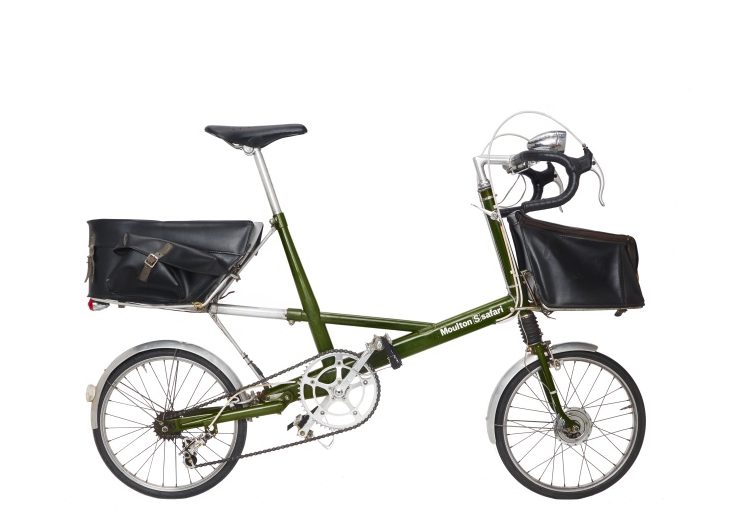 Since 1885 when Starley introduced the Rover Safety bike, there have been many efforts to improve on his design. Most of those efforts came to nothing. The one exception is the Moulton bicycle that was introduced in Britain in 1962 and had a significant impression on the bike industry.  It was introduced at a time when interest in bicycles and cycling in general was at an all-time low.  Motor scooters and affordable cars had a devastating effect on the bicycle market.

The new Moulton was a breath of fresh air.  It was suitable for both sexes:  it had a ‘New look’ and was designed to be one size fits all. It had 16” wheels fitted with small section high pressure tires and front and rear suspension, which made for a responsive ride.  The low mounted, high capacity carriers made it an ideal ‘shopper’.  It fit in well with the swinging sixties, mini-skirts and mini cars.

Dr. Alex Moulton, an engineer who had specialized in suspension systems for cars, designed the Moulton. He had been, along with close friend Alec Issigonis, closely associated with design of the first Austin Minis. He turned his interest to bicycles when he purchased a used Hetchins bike and found it uncomfortable to ride. His design work on the mini was reflected in the small wheels and suspension in the bike.

Having had his design turned down by Raleigh, he decided to go into production himself in a factory close to his home.  The Moulton was an immediate success with demand far exceeding the capacity of his factory.  He approached the British Motor Corporation, with whom he had close ties, and production was transferred to one of their factories.

On seeing the success of the small-wheeled Moulton, other bike companies, including Raleigh, introduced small wheel bikes to compete.  However, none of the competition had suspension.  Raleigh introduced the RSW 16, which was similar to the Moulton with 16” wheels but relied on large section tires for its suspension.  The resulting bike was slow and very heavy.   However, the marketing of the world’s largest bicycle company made the RSW 16 a success and its sales cut into the sales of Moultons.  The Moulton Company was sold to Raleigh in 1967 and production continued there until 1974 when it was discontinued.

Before the Moulton Company was sold to Raleigh, there were several models available.  The Moulton certainly should not be considered just a utility bike, or heaven forbid a folding bike.  There was a separable model; the Stowaway but there were models for every type of riding including racing and extensive touring.

A four man Moulton pursuit team caught their opponents in a 4000-metre promotional event.  The small wheels allowed the riders to be closer together affording better aerodynamics.

This Moulton is the top of the line touring model, the S Safari.  It has a six speed Benelux derailleur, a Williams alloy cotter-less crankset and a  Sturmey Archer dynohub lighting.

Following the demise of the Moulton Bicycle, in 1975 Alex Moulton worked on a design of a successor.  Raleigh still owned the Moulton name, so Dr. Moulton formed another company to make the Alex Moulton range.  The range of bicycles consisted of two models.  The AM2 had a two speed Sachs Duomatic hub gear and the AM7 a 7 speed derailleur.  I had left the UK in 1964, but had been interested in Moulton from its introduction.  In 1983, when the AM series was launched, I immediately ordered a number of both models and within a short period of time, our shop was selling more than almost any other shop in the World.  A member of our staff raced a modified version in several local races and won a local criterium.  Soon after the UCI brought in regulations banning the use of wheels smaller than 26″.

The staff at the shop were very enthusiastic about the Moultons and we were, before long, selling modified versions of the AM7 with double chainrings.

During a visit to the Cologne bicycle show, my business partner, Mike Brown and I met up with Alex Moulton at his booth.  We showed photos of the Moultons, onto which we had fitted double chain-wheels and he dismissed the idea saying that they were totally unnecessary.  The fact that we had a significant demand for 14 speed touring versions of the Moulton and that we were one of his foremost dealers didn’t seem to impress him at all.  It was sometime after this that the Ams were available from he factory with double chain-wheels.

Over the years I have acquired a number of Moultons of which a few remain in my collection: 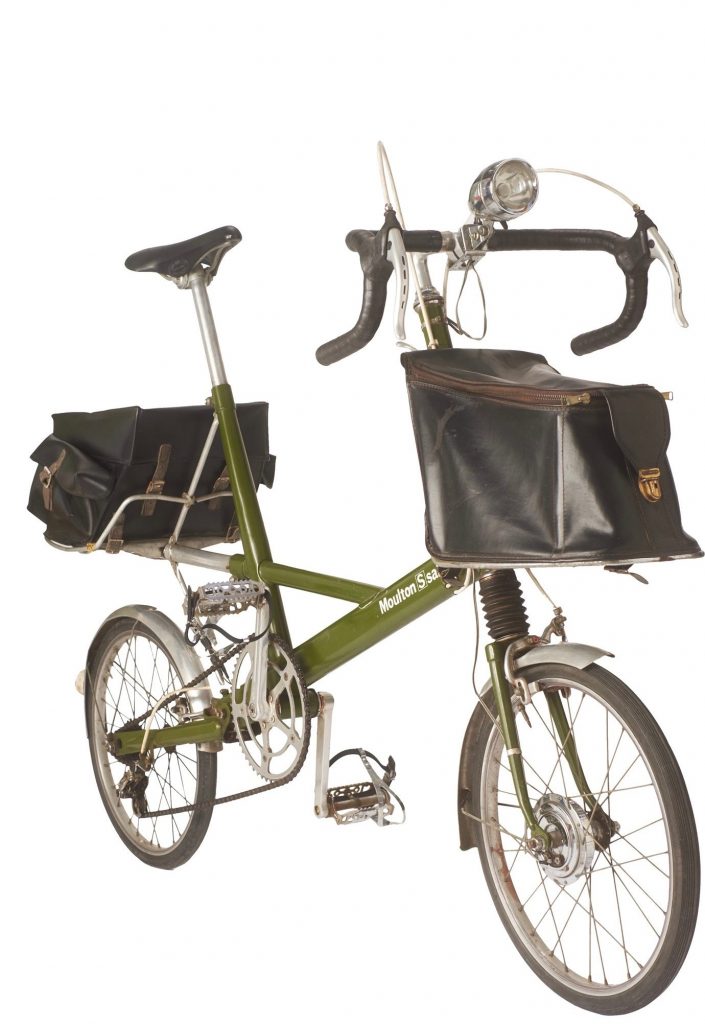 This is one of the rarest of all Moulton models – the Safari S. The “S Models” were a luxury line of Moultons, built in extremely small numbers  from 1965 to 1967 at the S works, a separate workshop in the town of Bradford Upon Avon, by a skilled team under the supervision of Olympic cyclist and respected frame builder, Jack Lauterwasser.

This superb Safari S has been in my personal collection for almost 30 years. It is virtually “as new”, having been used very lightly. As the photos show, this bicycle is complete and pristine in every respect and may well be one of the finest remaining examples. 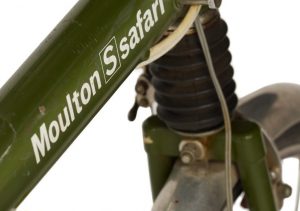 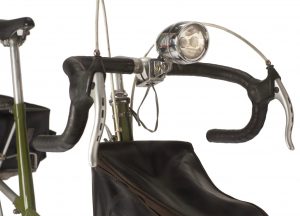 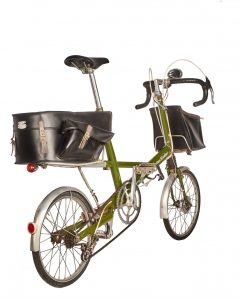 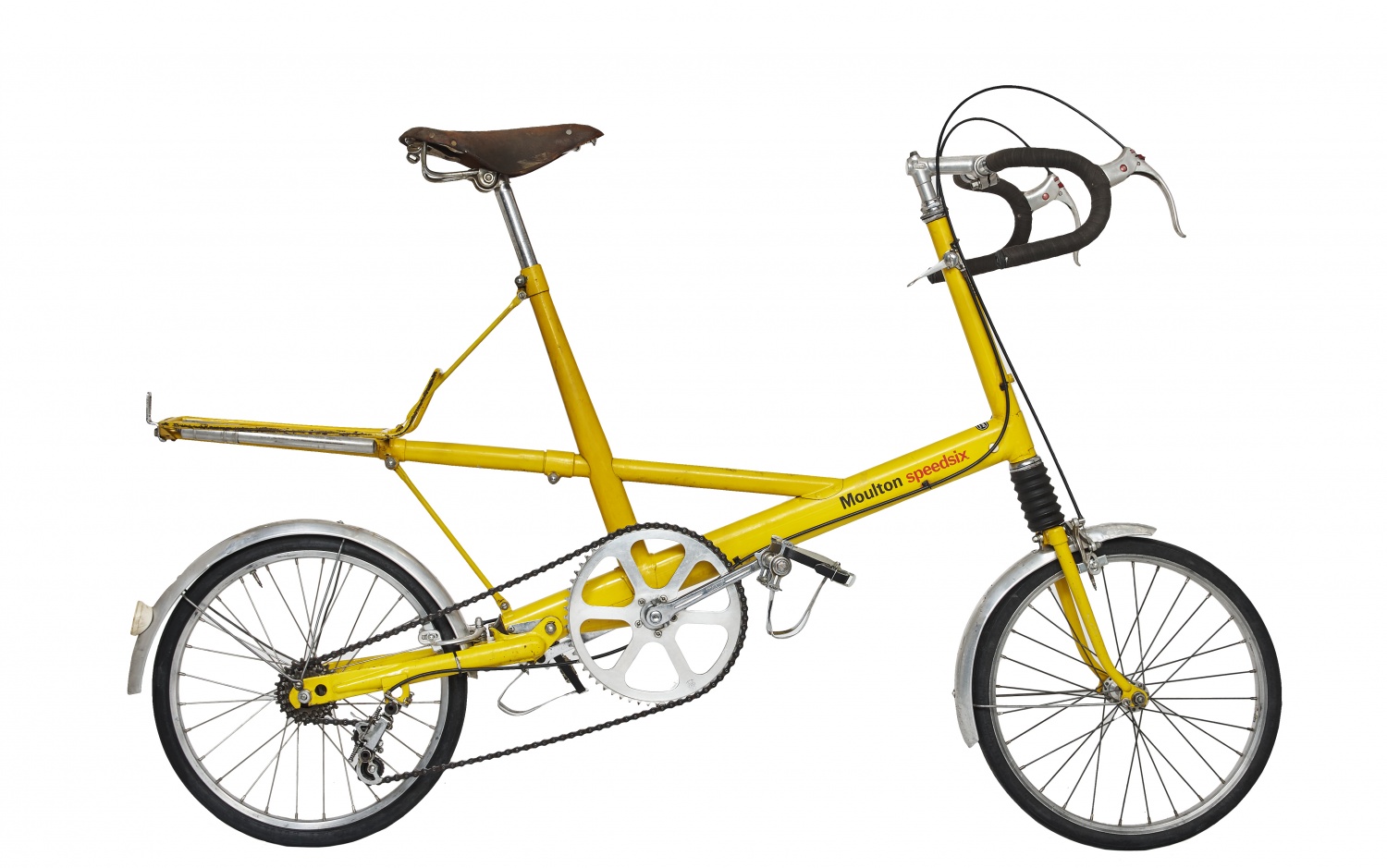 This is a fine example of the iconic Moulton Speedsix of which only about 600 were made. The Moulton Speedsix was “arguably the most refined and modern-feeling of the Classic Moultons. It’s specification was entirely under the control of Alex Moulton, unlike the later Raleigh models.”

This Speedsix has been in my personal collection for almost 50 years.  As the photos show, this bicycle is complete, original and pristine in every respect. 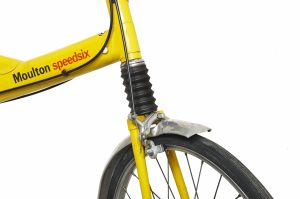 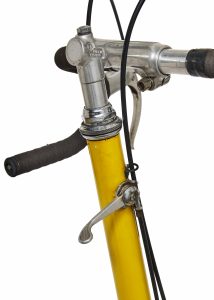 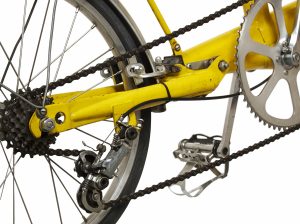 Built with Sturmey Archer 3 speed, 14 x 1 3/8 wheels with woods valves, a Wittkop saddle.  Original paint and components.  This bicycle is currently offered for sale in our Bicycle_Specialties eBay store at this link. 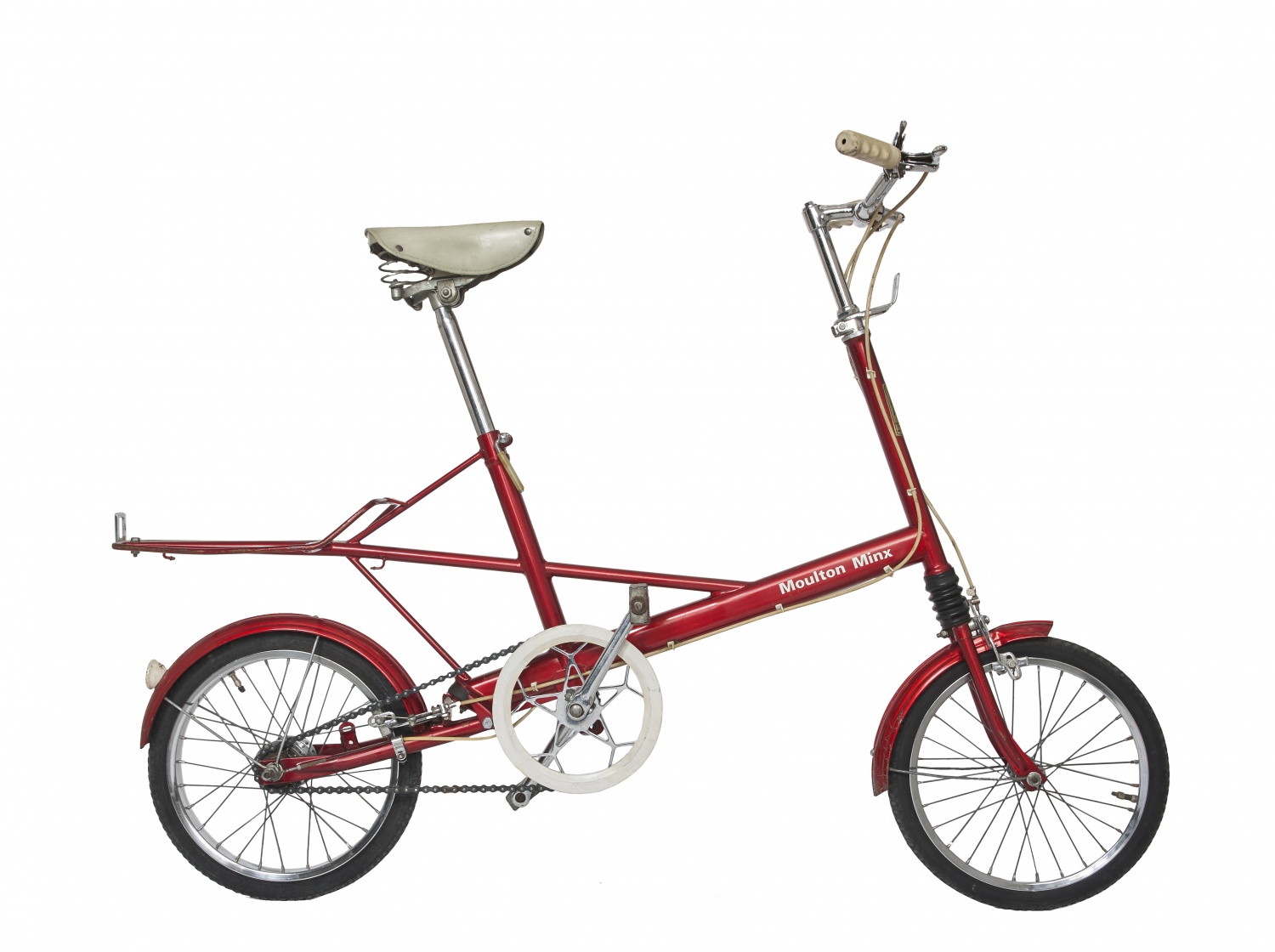 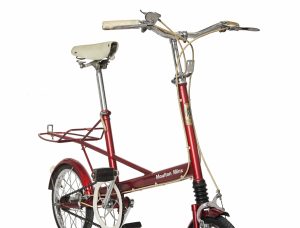 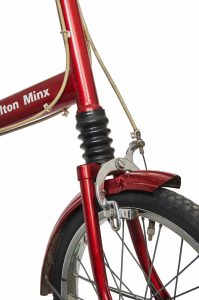 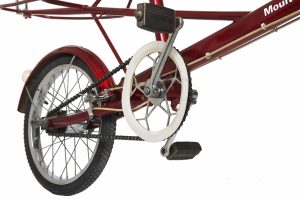 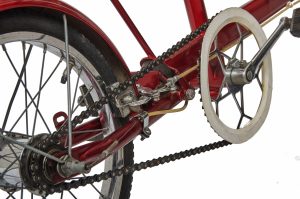 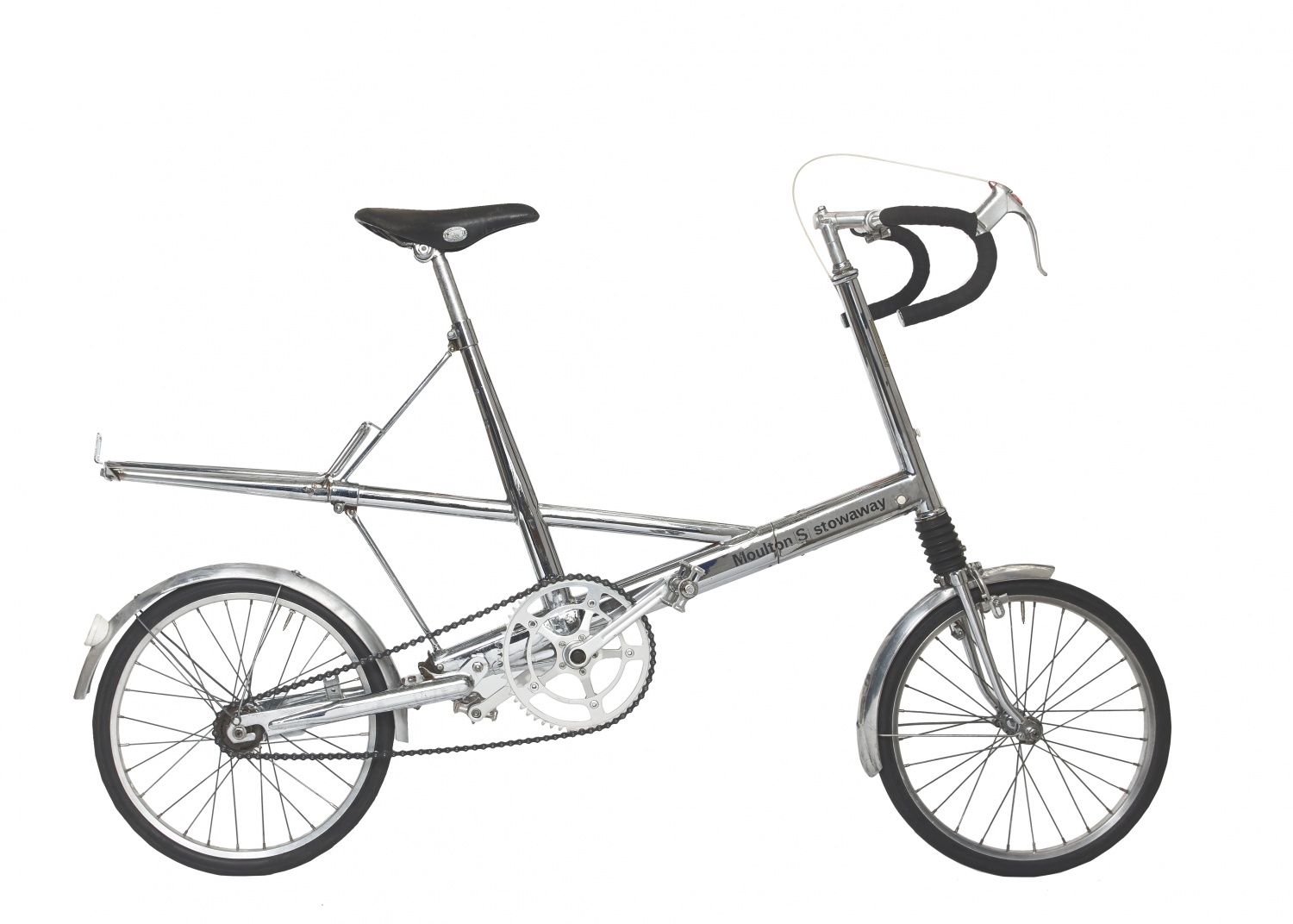 One of the rare Moulton “S” models – the Stowaway S. The “S Models” were a luxury line of Moultons, built in extremely small numbers  from 1965 to 1967 at the S works, a separate workshop in the town of Bradford, by a skilled team under the supervision of Olympic cyclist and respected frame builder, Jack Lauterwasser.

This superb Stowaway S, in the optional factory chrome finish,  has been in my collection for almost 50 years. It is virtually “as new”, having been used very lightly. As the photos show, this bicycle is complete, original and pristine in every respect. 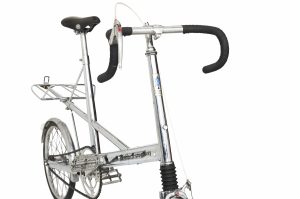 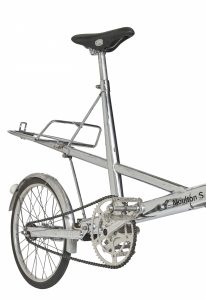 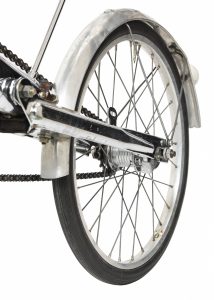 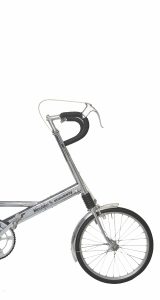 This bicycle is currently offered for sale.  Buy now at this link.

This feature is an excerpt from the book A Life With Bicycles by Mike Barry and Walter Lai.  It will be available for purchase soon.