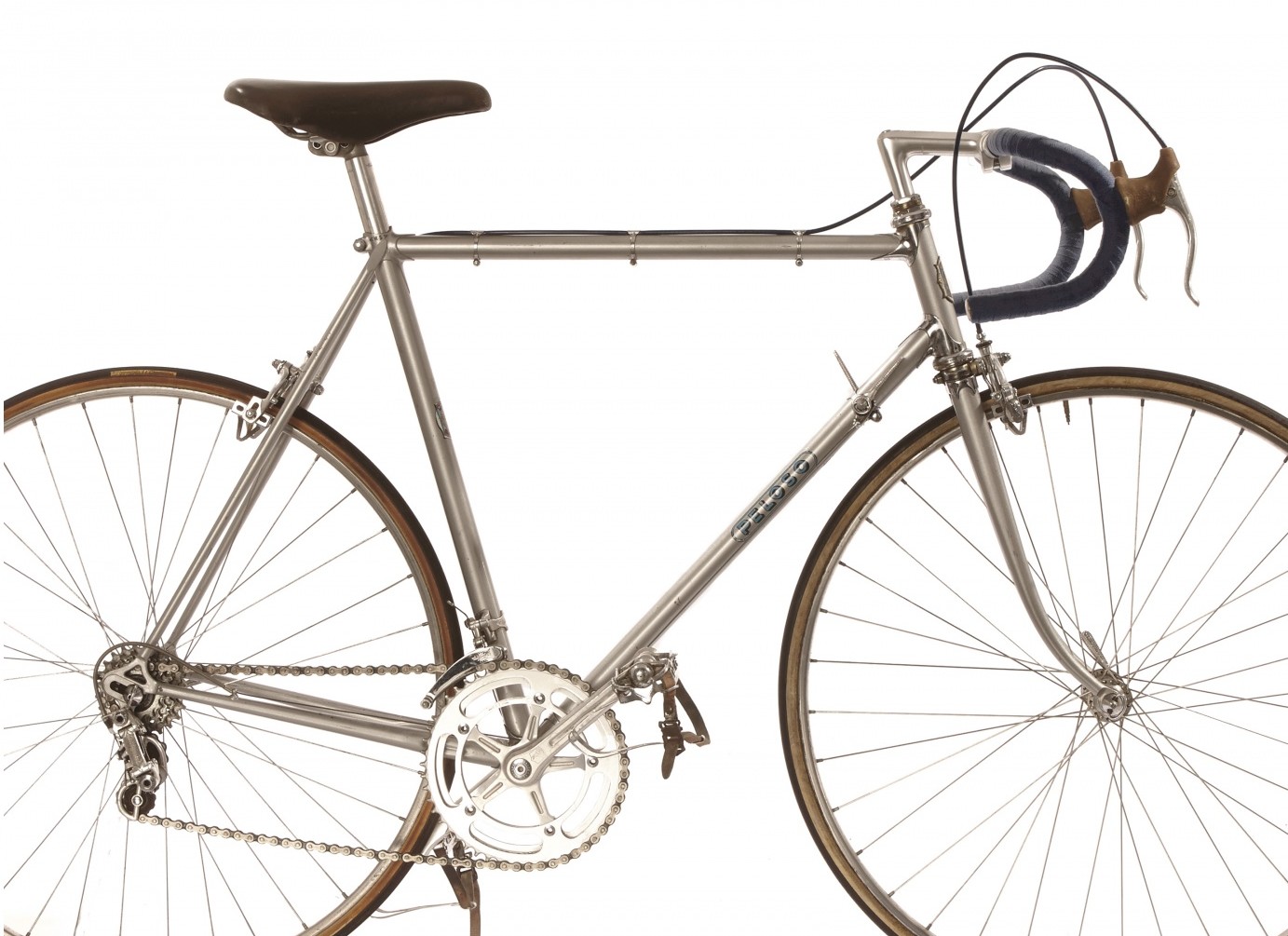 I had just finished a circuit race in Toronto’s High Park. I hadn’t done particularly well in the race but I felt that some fitness was returning. This was encouraging as I had taken a couple of months leave of absence from work and had planned a trip back to England. I hoped to compete in races around the London area where I had raced before immigrating to Canada. The year was 1970 and I had been away six years. I was looking forward to meeting up with my old teammates and seeing if I could still hold my own in the races after six years away. At the finish of the High Park race I leaned my cherished Bianchi against a friend’s car while chatting to friends and other riders. When I turned to pick up the bike it was gone. Stolen while almost within reach.

I was due to leave for England in a couple of days. The planned racing trip wasn’t going to be much good without a bike. What to do: buy a new one here in Toronto or buy one in the UK. I decided on the latter. I spent the flight dreaming of the best bike that I could get, a Cinelli perhaps, another Bianchi or maybe a good English bike. Then I remembered ‘Baron” Smith. The Baron was one of the numerous colourful characters in the London cycling scene of the sixties. He was known as “The Baron” as he always had the most expensive and up to date bike and equipment. He was always immaculately turned out and it was rumoured that his bedroom wall was covered in a display of all the Campagnolo components available. The Baron rode a Peloso. It was silver with chrome lugs. That was the bike that I wanted.

I got in touch with Baron Smith as soon as I could. Where can I get a Peloso I asked? “You have to go to his shop in Alessandria,” he said. “That’s about halfway between Milan and Turin. Tell him I sent you, it may help”.

I talked good friend Mike Greenwood into joining me on the trip and we set off by train to Alessandria. Mike took his bike along as we intended riding back at least as far as Paris.

On arrival in Turin we went to the baggage area to pick up Mike’s bike but although it was there the officials wouldn’t let us have it until it had cleared Italian Customs. The Customs officer wouldn’t be in until the next day. We concocted a story; in our practically non-existent Italian that Mike was racing in Alessandria the next day and we had to get on the next train with the bike. At least one of the rail officials seemed to be a bike race fan and after a great deal of discussion they gave us the bike.

It was Monday when we arrived at Peloso’s small back street shop. He had no stock bikes. All were made to order. “Yes I can make you a bike. When do you want to pick it up?” he asked. “We would like to leave on Friday” I replied. “Impossible, I have to build the frame, have it chromed and painted and then assembled by Friday! Impossible.” Then I mentioned that Baron Smith had sent us. “Well let me see what I can do” was the response. I think the Baron must have been a very good customer. 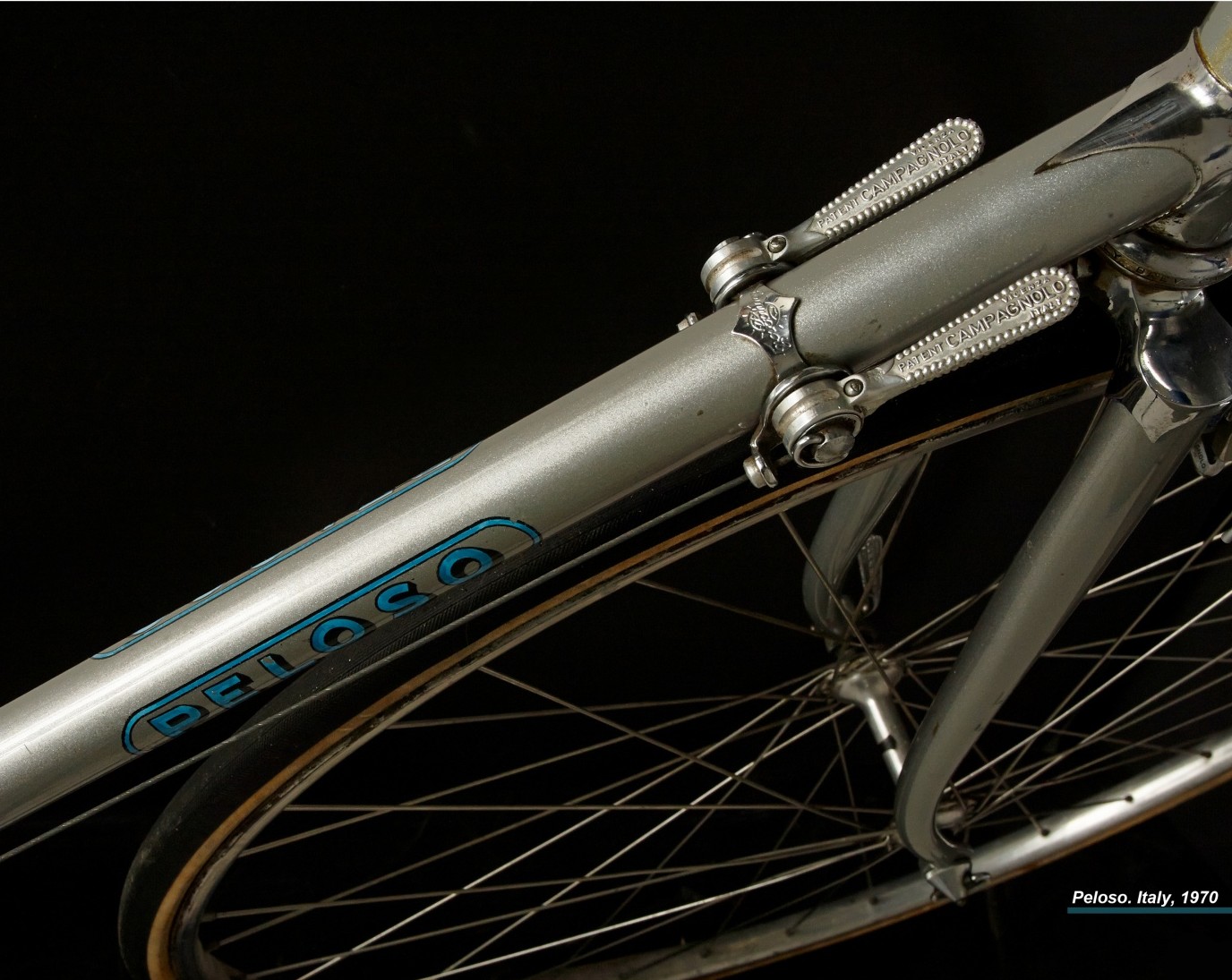 Mike and I spent the next couple of days down on the beach near San Remo and were back in Peloso’s shop on Thursday afternoon. The frame was still at the painter’s but he sent off the shop “boy” to fetch it. It was beautiful. It was to be assembled “all Campag” of course but there was some discussion about the brakes. Campagnolo had just introduced their brakes and Peloso had a couple of sets. I could have these fitted rather than the standard Universals but that would put the price up $20.00. I decided to go for it and at about 9.30 that evening I left the shop with the “all Campag” Peloso and two extra Clement silk Criterium tubulars after paying the grand sum of $220.00. 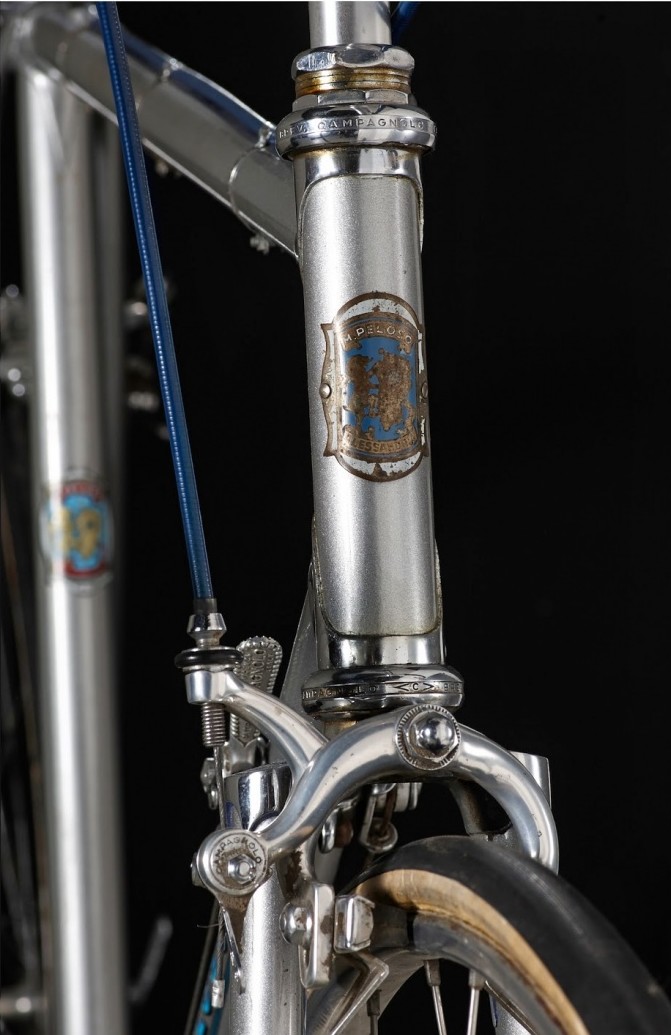 The first Campagnolo brakes have no name engraved. They are now widely sought after by collectors. 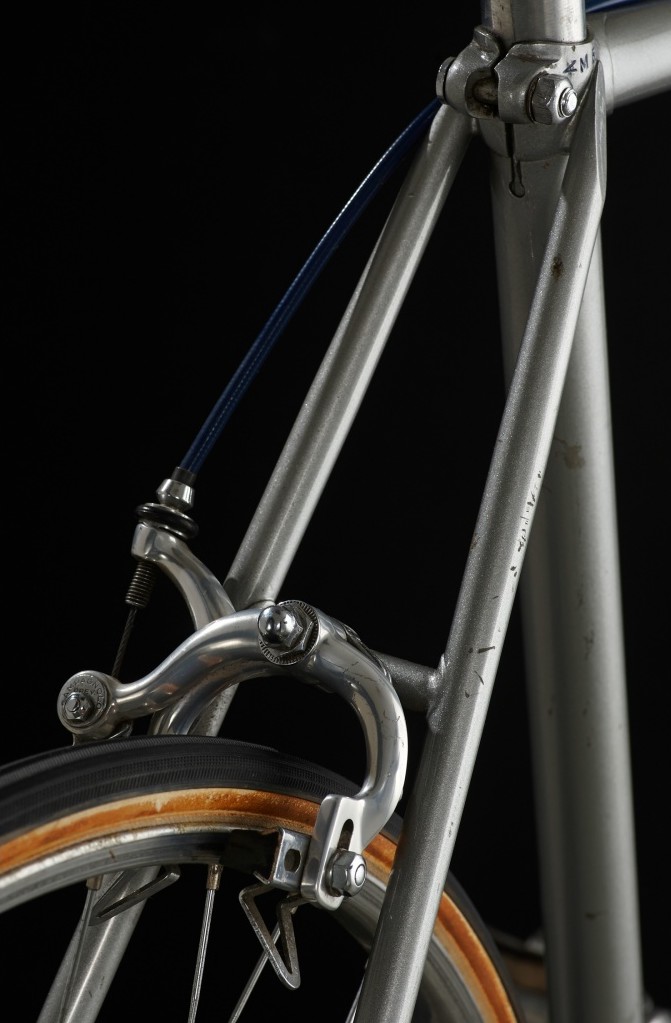 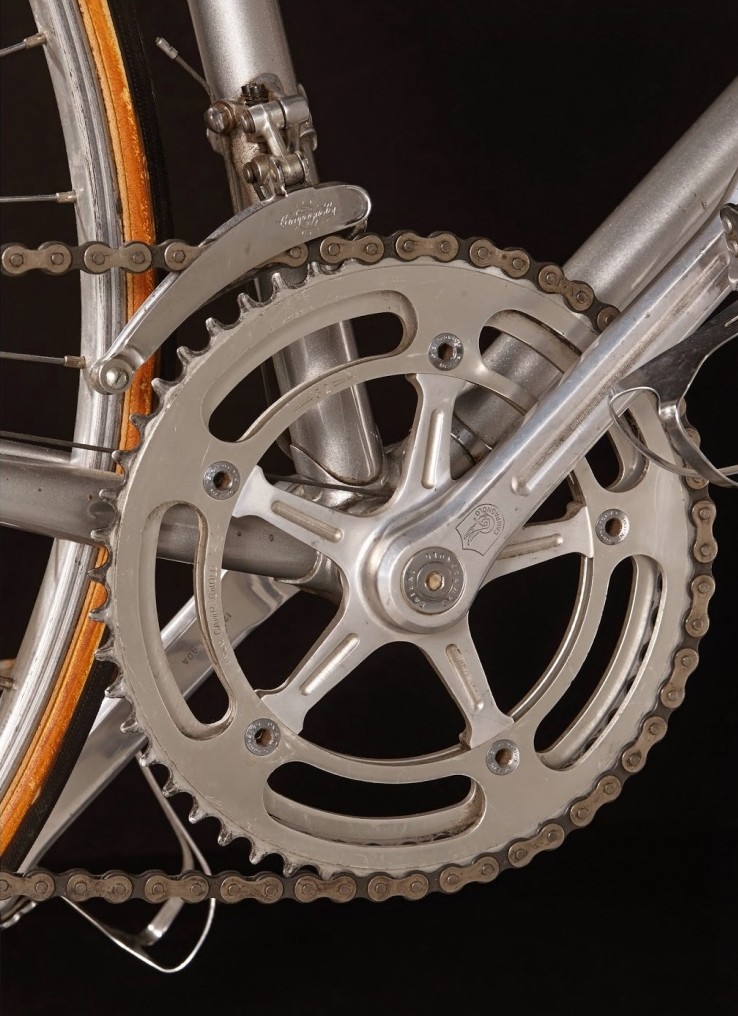 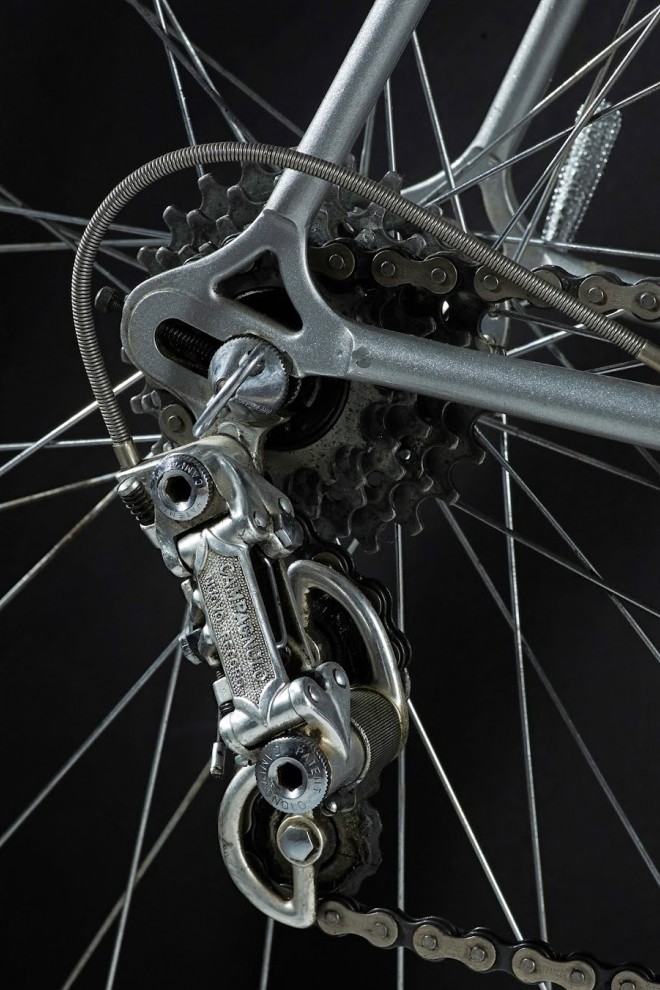 It was a beautiful hot day and the climb was quite a struggle especially as both Mike and I were carrying large ‘mussettes’ filled with all our gear. Mike was suffering really badly and kept stopping to fill his bottle from the ice-cold mountain streams coming down from the glaciers above. When we arrived in the Swiss town of Brig he could barely stand from the pain in his kidneys. I had to help him undress to get into bed.

Next morning Mike was a little better but it became obvious when we started climbing the Furka Pass that he wasn’t going to be able to make it to Paris. We decided that we would catch a train at the next town. The next town was at the other side of the 7,900 foot pass. A fantastic climb with walls of snow either side of the road and the most wonderful Alpine scenery all around. The descent brought us into a small town with a railway station where we bought tickets to Paris.

The train was already in the station so we loaded our bikes into the baggage car and went for a meal in the restaurant. We were told that we had an hour before departure so we had plenty of time. Long before our hour was up the train pulled out with our bikes on board.

Seeing our dilemma a fellow suggested that we get out onto the highway and flag down a car. “The highway runs parallel to the railway” he said ” and as the route twists and turns through the mountains a car should be able to beat the train to the next station”. The first car we saw stopped and picked us up. When we explained the situation the two businessmen inside thought that this challenge was great fun. It wasn’t long before the train was in sight and we were able to overtake it. But then the road veered away from the railway and when it rejoined the railway again the train was again in front. We overtook it again and managed to get to the next town with enough time for us to run over a footbridge and arrive breathless on the platform as the train pulled in.

The rest of the trip back to London was uneventful and I was soon out on the Peloso on familiar roads in Surrey and Kent. One of the first races I entered was on the old motor racing circuit at Crystal Palace where I suffered the ignominy of crashing while climbing the hill. My chain slipped on the cogs and being out of the saddle I was dumped onto the tarmac. Although I wasn’t hurt the ‘sag wagon’ driver insisted on picking me and the wonderful Peloso up and taking me to the finish. My mates thought it hilarious and asked if I had forgotten how to ride a bike while in Canada.

I still have the Peloso. It has been repainted once but for a forty six year old bike it looks pretty good. I haven’t ridden it for a while but I will have to get it out again and relive that wonderful ride in the Alps even if it is just on those hills north of Toronto.

The headbadge is a bit worse for wear.

One thought on “Vintage Bicycle Feature: The Peloso”