Restoration Feature: A Ride On My Gios 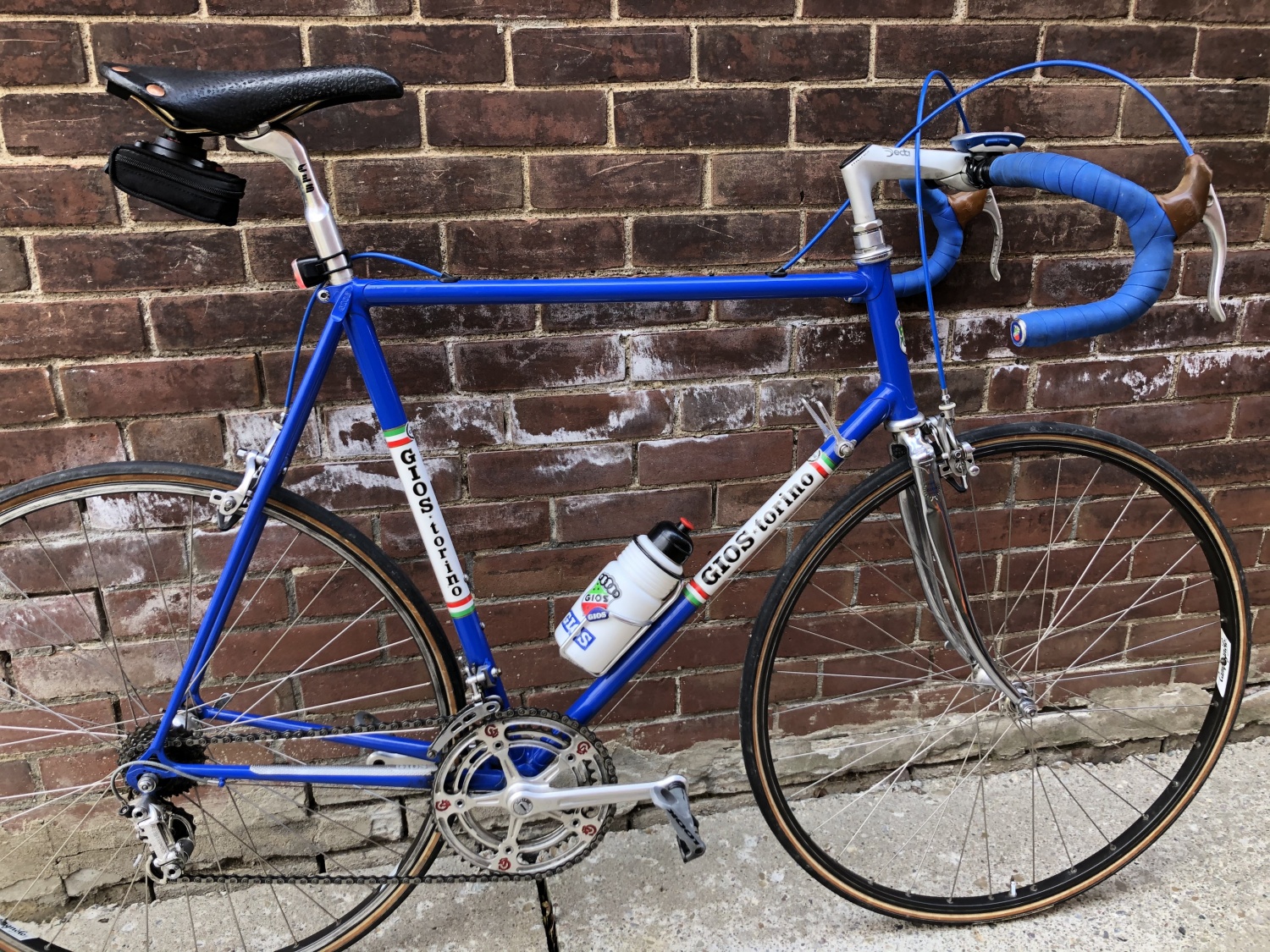 In April the thoughts of the tifosi turn to the spring classics.  The cobbled classic, Paris Roubaix would have been run last weekend if it hadn’t been cancelled due to Covid.  Among the greatest of Roubaix’s winners is Roger de Vlaeminck.  Linking him to Gios Torino, the bike I rode today, are chewing gum, gypsies and a very particular shade of blue. 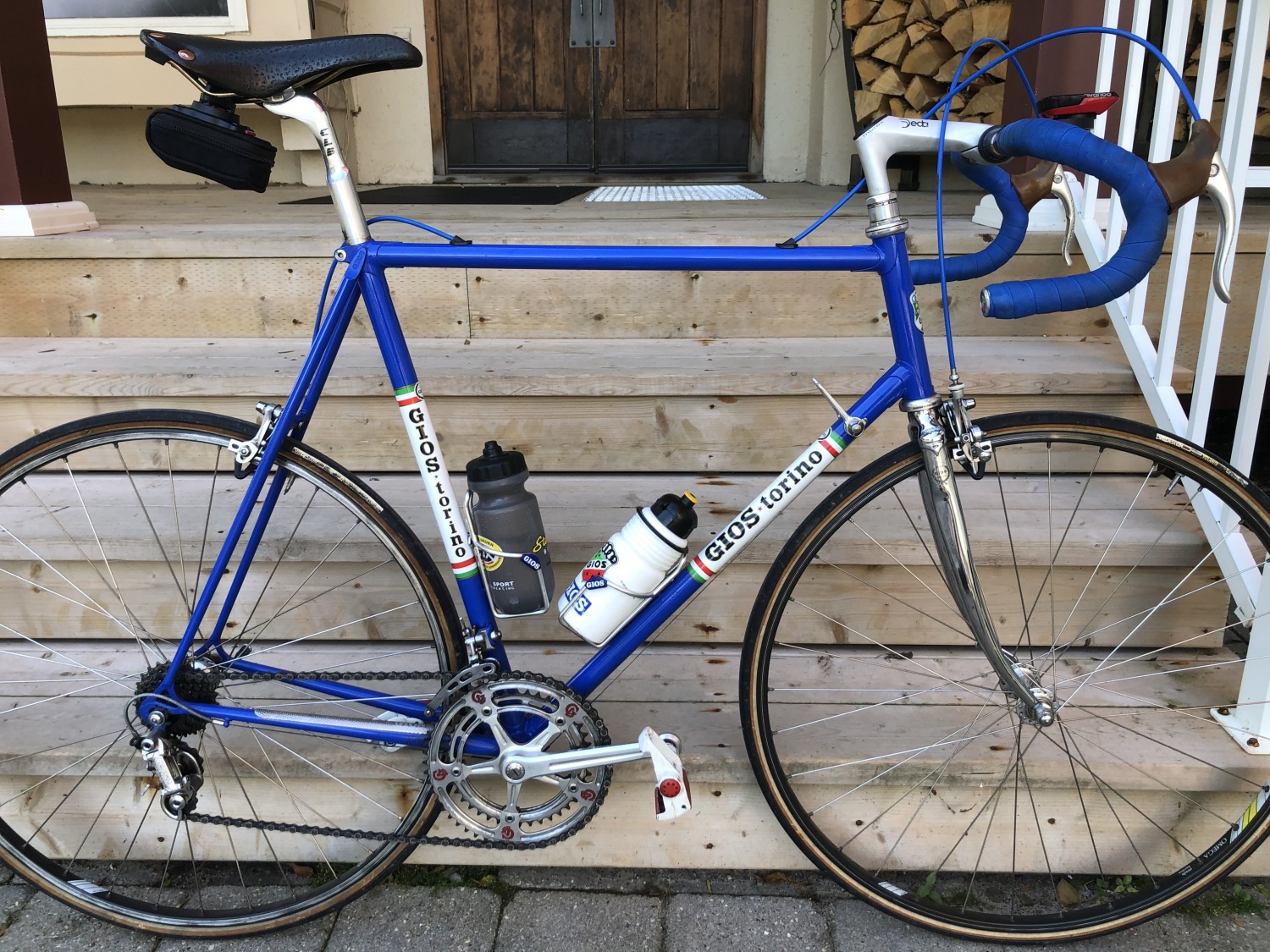 First, the bike.  My Gios, a mid-80’s “Professional” model, was refinished a few years ago by Bicycle Specialties. The Gios cobalt/indigo blue is iconic and it’s tough to get it exactly right in a repaint.  Apparently the secret is a red undercoat and then indigo blue on top.  In any case, mine is pretty close.  Up until the early 80’s, the fork crown featured two “coins” with the Gios logo. They went to a sloping crown after that, like the one on my bike.
Gios frames are known for steep-angled seat tubes and tight stays.  The handling on my bike reflects this.  It loves to dive into corners and responds quickly to steering input.  However, I need to use a big set-back seat post to get my saddle backed up to my normal position. 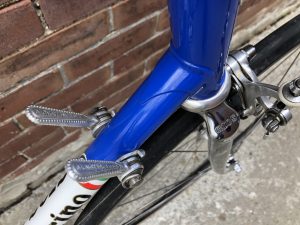 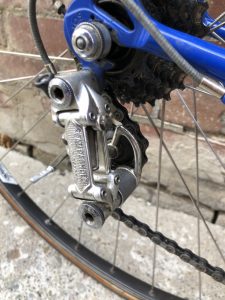 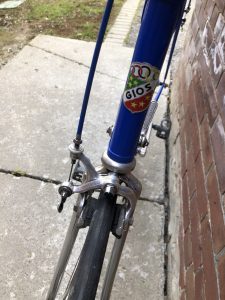 The components on my bike are mostly Nuovo Record, with the exception of the brake levers and calipers.  The brake levers are Gipiemme, normally ranked below Campy.  However, I love the drillium look and gum hoods.
The calipers are Campagnolo Cobaltos.  These were issued after Campy first attempt at delta brakes went badly wrong.  They were recalled and, in their place, the company came out with the Cobalto.  Essentially they were Super Record calipers, but with the addition of a glittering blue “gem” in the centre.   For me, the blue inserts work beautifully with the indigo of the frame.
Gios Torino itself was started by Alfred and Aldo Gios.  Gios started out making low-end commuter bikes. In 1972 he met the owner of the “Brooklyn” chewing gum brand who wanted to start a pro bike team.  The Gios blue came from blue in the US flag themed chewing gum packaging.
Nicknamed “Le Gitane” (the Gypsy) because his father was a travelling clothier, Roger de Vlaemnck joined the Brooklyn cycling team in 1973.  Despite battling Eddy Merckx in his prime, the Flemish hardman would go on to win in Roubaix four times and stand on the podium five other times.  He became known as Monsieur Paris-Roubaix.

Today had that northern European feel as I rode out of the city; temperature in single digits, blustery and the sun not quite peaking through the clouds.  A perfect day to ride the Gios and channel the spirit of Le Gitane.

One thought on “Restoration Feature: A Ride On My Gios”