Time for reflection and the reengineering of Professional Cycling? 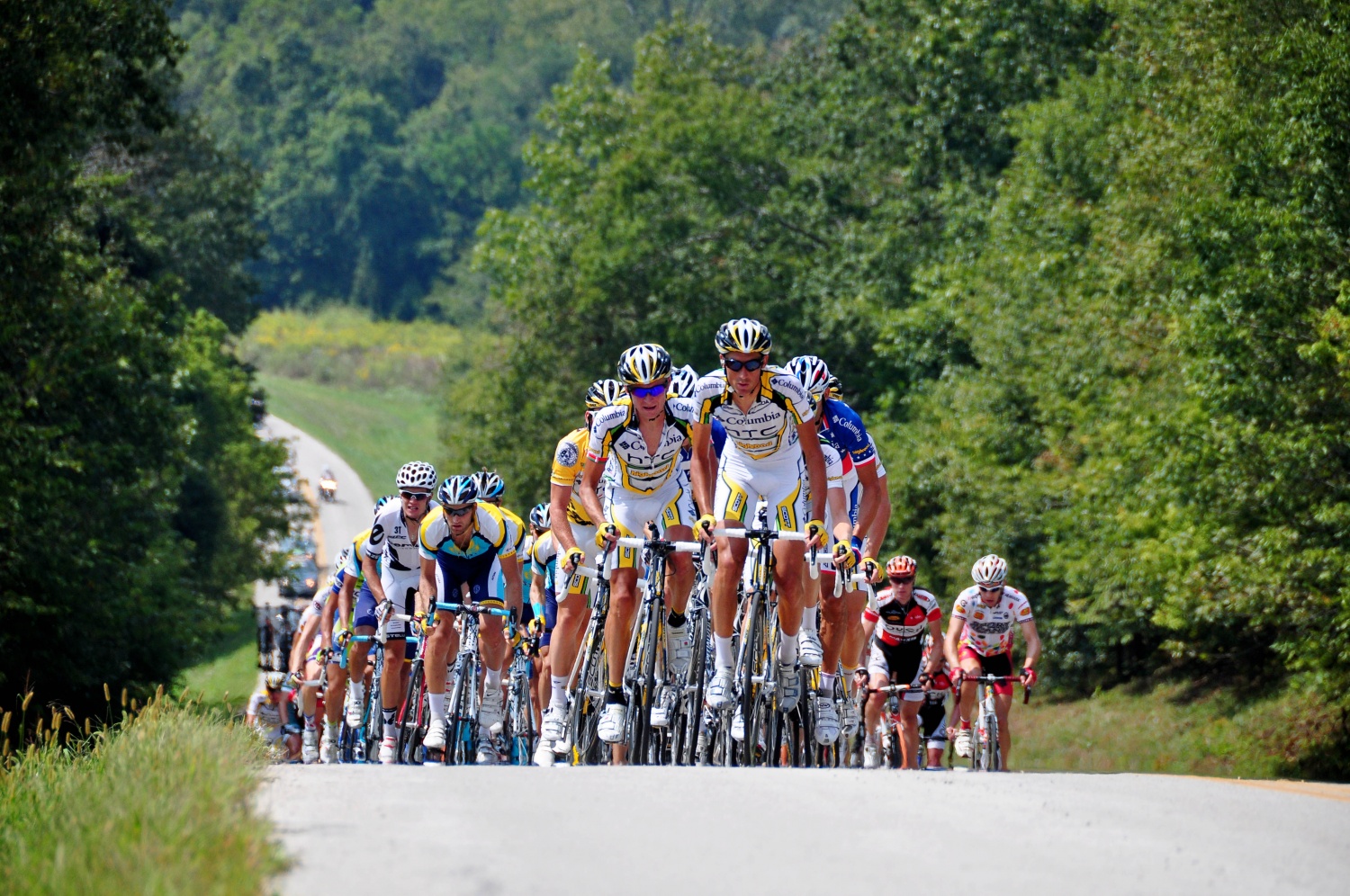 As the professional cycling peloton rolls indoors on its home trainers due to the Covid19 lockdown, the continuation of the 2020 racing season looks increasingly unlikely. Sean Kelly, the retired champion cyclist turned commentator Sean Kelly, suggested in his blog that its members use this time to address the state of the sport and their health. He pointed to the number of serious injuries occurring in the races, the length of the season and the demanding level of competition throughout the entire racing season as factors that will not only shorten riders’ careers but also affect their long-term health.

Kelly writes that the increase in fractures could be because the riders’ bones are more brittle due to diet and lack of balance, as professional cyclists do less cross training now, than they did in prior generations when the competitive season was shorter.  His argument is valid.  Cycling isn’t a weight bearing sport and combined with constant dieting, cyclists’ bone density is often low. Cortisone, a banned drug which has been and continues to be abused in cycling also significantly affects bone density.   There are, however, more factors causing the increase in fractures. And if the governing bodies which should protect the riders’ health and interests aren’t interested in investigating and can’t be relied on to take the initiative, then the riders must. If other workplaces had the same injury rates as bike races, they would be shut down by the government or the workers would go on strike. Rider strikes were common in past generations. But in recent years they have become less frequent and their common voice is fractured and impotent. The passionate desperation to race in the professional peloton overrides the collective voice to influence safety and its members collective self interest. 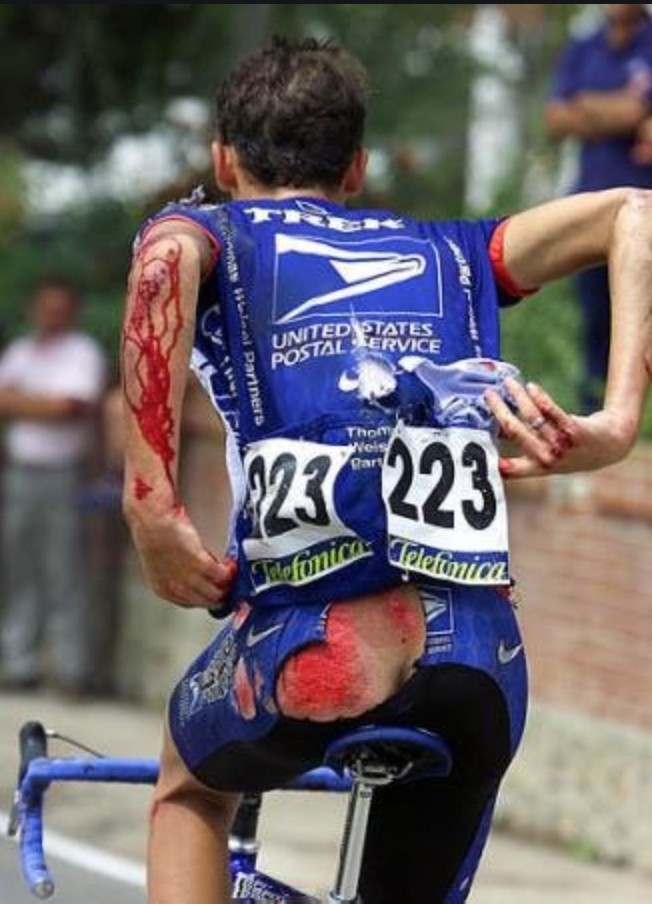 Michael Barry, after being dragged by a television motorbike that collided with the peloton in the 2002 Vuelta a Espana.

During my elite racing career (1994-2012), the shifts in cycling were progressive but notable, some for the better, some for the worse. During that time the number of serious crashes increased. In my final years of racing, it seemed the only riders on the team who had not fractured bones were the neo-pros. But, it wasn’t long before they had as well. In cycling, the number of injuries, and their gravity, is accepted as part of the sport. It shouldn’t be.

As environments change progressively, we are less aware and perhaps more accepting of the change. I often wondered why the teams I rode for would send a squad to a race where there was a high probability that four or more of the eight riders might be injured. Some injuries were cuts and scrapes while others were more severe. On several of the teams I rode for, I questioned the management about their reasoning.  It didn’t seem overly beneficial to have riders convalescing at home. The reasons they gave for starting these races were:

There were races that were outliers—events where every rider knew there was a good chance of injury. The injuries weren’t consequence of cobbles or terrain, but quite often were due to infrastructure, poorly marked or routed courses, parked cars sticking out into the road, or a disparity in level between the riders. Every rider in the peloton knows which races are the most dangerous, yet, year after year, nothing would change and we’d be at the starts.

With each season, the number of serious crashes increased, to the point where, near the end of my career, it often plagued my thoughts. Two years after I retired, a few of my friends who were still racing told me I was fortunate to be out as the racing had become even more dangerous.

Since then, little has been done. To my awareness, nobody has looked into why there was an increase in both crashes and fractures. In cycling, jobs are precarious and, as a result, change is difficult because most people fear they will lose their job if they speak up. This is also a part of the problem. There is little leadership amongst the riders, and the peloton hasn’t had a true spokesperson in decades. Without that leadership, there is also less respect within the peloton and less solidarity among the riders. Although the riders work together in a peloton to put on a show for the audience, the ultimate goal is often egocentric and short sighted as there is little security in the current structure. I’m not sure many young professionals think of their careers potentially lasting fifteen years, as past generations did. There is a sense that they have to make an impression today, which leads to a relentless and reckless pursuit of results.

As Kelly points out, the competition for results is now fierce from January until late October. Riders are expected to be in good shape for the first training camps, which are now before Christmas. They no longer have the time to cross train, build their musculature, let their bodies recover by returning to a healthier weight and let their minds rest.  At the first camps, riders in shape, who are skinny and fit, are complimented while the heavier riders are reprimanded.

This trend towards year-round specialization isn’t unique to pro cycling but, perhaps more worryingly, has also become the norm in youth and amateur sport. The resulting increase in overuse injuries and burnout has been documented. Balance in diet, training and social life are crucial. 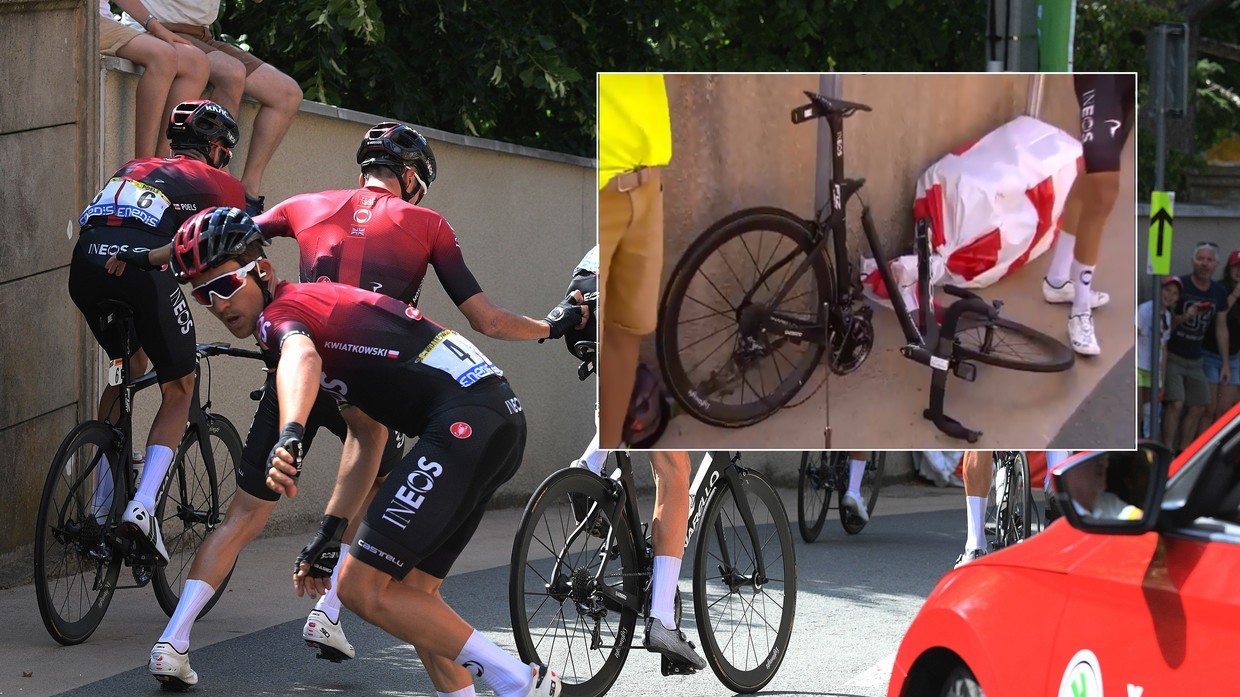 Perhaps, it isn’t just the infrastructure, competitive expectations and increased recklessness of the riders that has resulted in more fractures but also the materials of the bicycles, as Ian Austen wrote in the New York Times. During my career, bicycles began to fracture, collapse and snap on impact as carbon fiber became more prevalent in the peloton and weight was cut where possible. When material bends instead of snaps it dampens the blow and allows greater time to react. Like the other factors, which could possibly be leading to injuries, the materials used in the pro peloton should also be more closely examined in the race environment.

After each race, a communiqué with a list of the results, fines, injured riders and so on is sent out to all the teams, reporters and other race followers. Fairly simple data collection on riders’ injuries and their significance is not complicated. Over time, trends and outliers would become apparent. From the results, conclusions could be drawn. If a race consistently has an abnormally high number of injured participants the organizers could be warned, look for solutions and then reprimanded if they don’t implement change.

As the peloton snakes through the countryside, it appears to flow smoothly like water, around the traffic islands, concrete stumps, planters and curbs. As they hurtle along at over 50 kilometres an hour each rider is trusting the riders in front will point out and avoid any road impediments they can see ahead.  A moment of inattention results in a serious crash, and the flow is abruptly broken. Often numerous riders will slam into one another and then the tarmac, resulting in a pile of broken equipment and injured riders.

The entire peloton is expecting the race organizers to have course marshals alerting them. In the race finale, there should be hay bales or foam pads to lessen potential impact. Over the last few decades the increase in traffic throughout Europe led to the increase in traffic calming infrastructure.  In the last 25 years it has become harder to route courses that are safe with a fewer number of impediments, and in many areas, there are so many that it is a challenge for organizers to place enough hay or foam on the route. Closed circuits, rather than point-to-point races, would be a solution.

For most pro cyclists, the Covid19 lockdown is a serious challenge. Many have had their salaries cut and face losing their jobs, as they try to maintain fitness while staying in small apartments in locked-down European towns. It will be a long time before pro cycling returns to where it once was, if it ever does. This time provides an opportunity for the riders and teams to work with the governing bodies and organizers to restructure the sport so that it is safer, more equitable for women, more sustainable, and so that the riders feel they have long term security.

3 thoughts on “Time for reflection and the reengineering of Professional Cycling?”