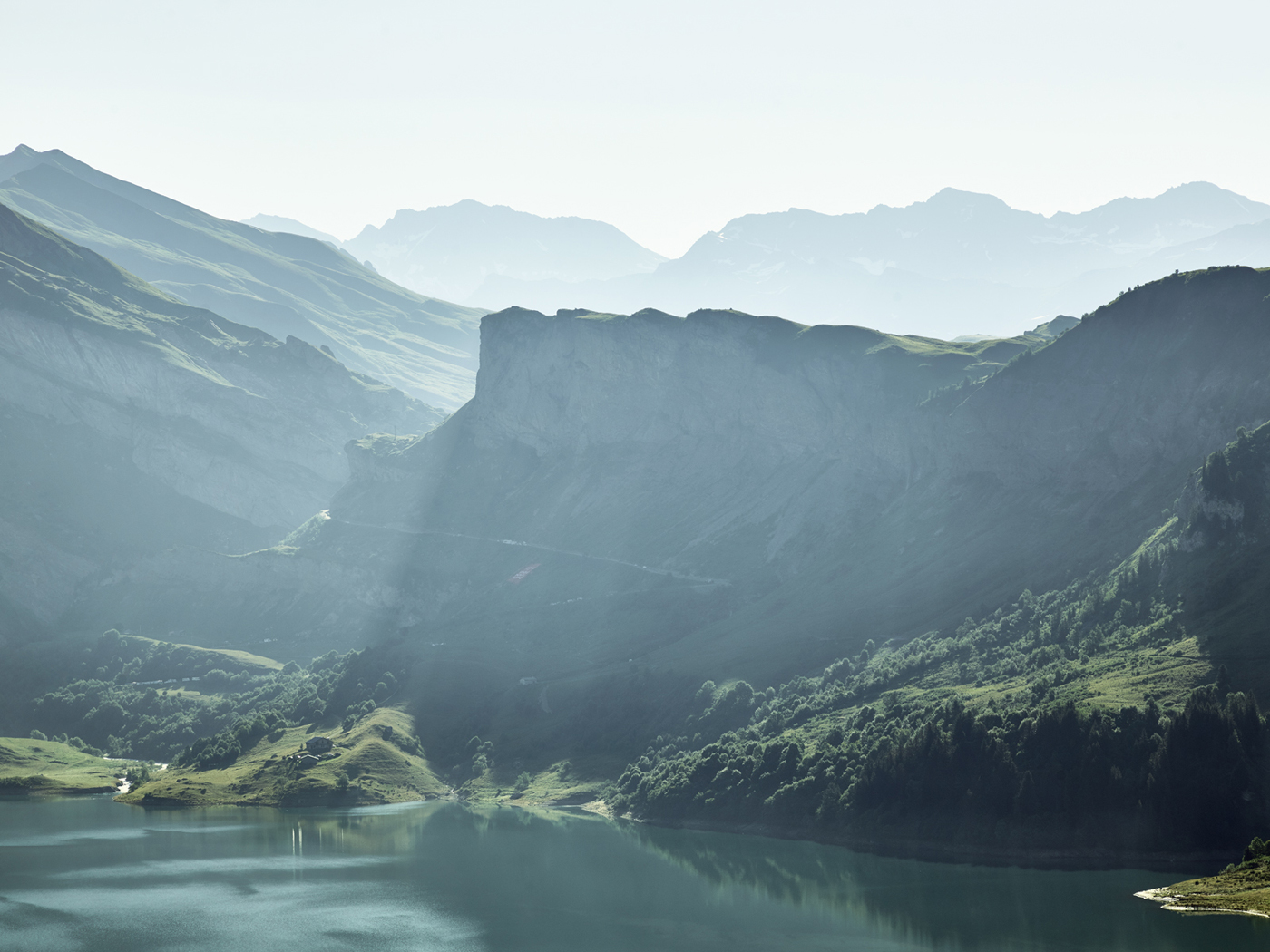 An excerpt from the book Mountains: Epic Cycling Climbs by Michael Blann. This chapter was written by Michael Barry, about his experience on the Cormet de Roselend, in the French Alps. 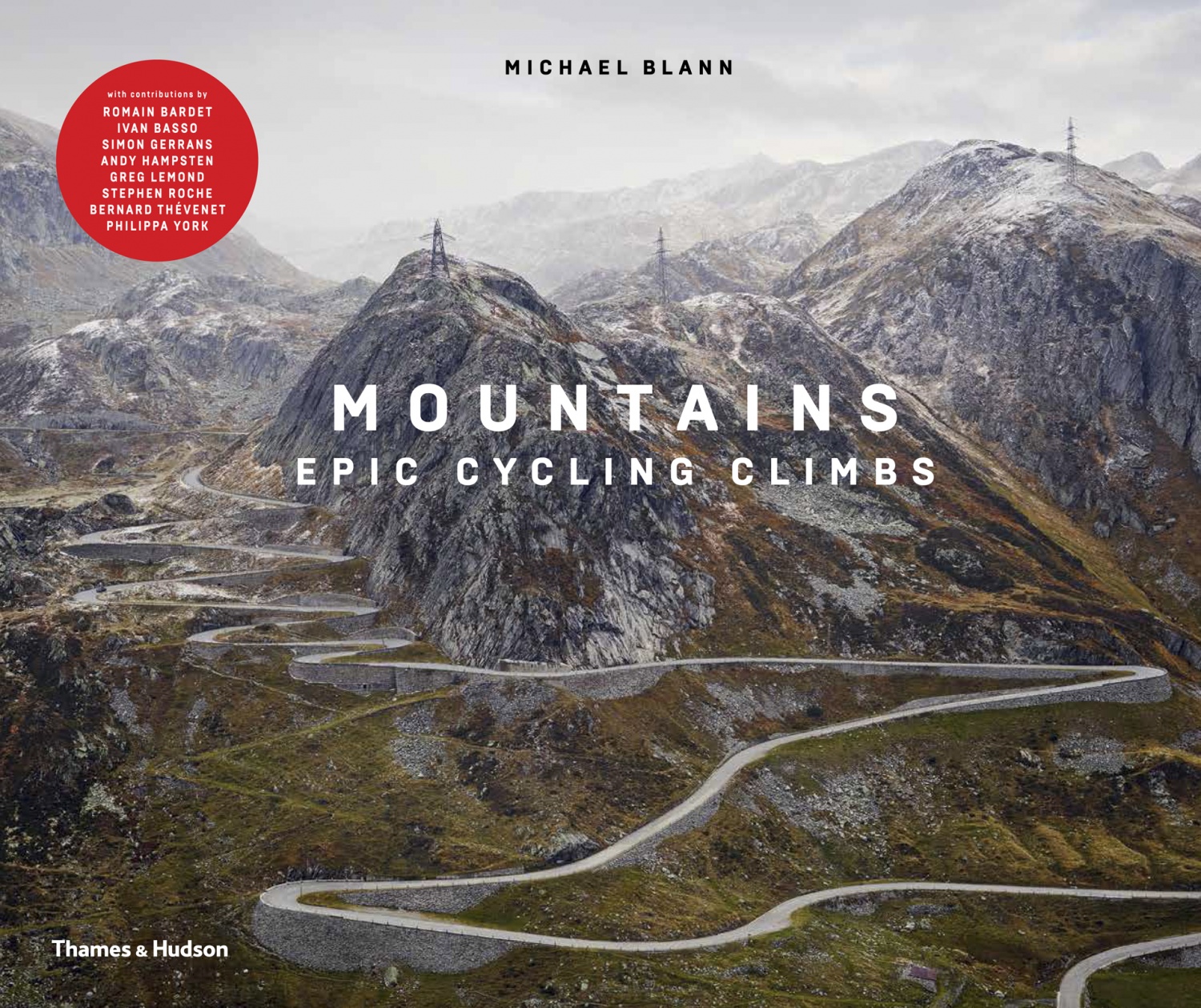 They chatted as they smoked, in a language that was undecipherable.  The air in the car with thick with diesel fuel and strong cigarettes.  It was a Lada, or Skoda, or something from the East:  I did not pay attention, or I can’t remember. My memories are spotty, as if the cold had frozen my thoughts.  We drove down the final meters of the pass, into the wooded valley, towards the feed zone where, if I were still on my bike, I could have warmed up, pulled on a jacket and ploughed on towards the finish line in Le Grand Bornard.

The wipers tried to keep up with the snow that was accumulating on the windscreen.  I was curled in the corner, against the passenger door, snuggled – no, jammed – between he mechanic, the spare wheels, his toolbox, a dozen water bottles and a team’s worth of musettes.  On the mountain road, thin lines left by bicycle tyres were etched into the snow, like threads in a fairy tale for the driver to follow.  I gazed out the window, frozen in defeat.

At the top, before I quit, I was already cold, and a blanket of snow covered the road.  I’d asked a TV motorcyclist whether I could borrow his gloves, just for a minute, as I prepared myself for the 20 km descent.  Without pity, he said, “No.”

Bicycles, with their frame numbers and shimmering paintwork, were piled outside the summit café, their colours contrasting with the strong building, the snow-piled roof and the grayness that had closed in.  I wasn’t going to join them, my rivals, in the warm café, I wasn’t going to quit.  In front of me on the snow-covered road was my opportunity to fulfill a goal, a dream:  I was in the top ten in the Tour de L’Avenir and the professional directors were taking note.  This was the penultimate stage.  A contract would come, I was sure.  The mountains make champions.  And they crush cyclists…

On the start line, I had mapped out the day in my head.  Ominous clouds loomed overhead, a shroud moving into squelch the joy of the crowd.  Being Canadian, I would overcome the cold rain, I thought.  But I was unprepared on every level.  I wore only Lycra shorts, a thin jersey and arm warmers.  I didn’t even have a waterproof jacket.  The loudspeakers boomed Gloria Gaynor’s ‘I Will Survive’, which would haunt me long after I had climbed off my bike.

It was the longest climb I had ever raced: 20.3 km and 1,277 m of ascent. The peloton shattered early on, and a break had gone up the road. This meant that the team at the front of the chasing group, ONCE, was setting a tempo that had us digging in. A sign said ’20 km au sommet’. I tried to ignore it.  At the pace we were riding, few riders would hold on to the leaders for even 2km.  Then we would be alone or in small groups until the summit, which was hours away.

The road narrowed as we climbed into the trees.  The tarmac was rough, a chip seal that dug into the tires, slowing us, making the fight even tougher. Rain was now turning to snow. Between breaths, pants, riders shook their heads:  ‘What are we doing?’  There was no talk of calling the race off. We were too young and naive to protest at racing in such conditions.

It has collapsed into a race survival.  A peloton of young boys, all under twenty-five, who would otherwise be at University, working in a factory or ploughing a field, were pushing up a mountainside with four passes to climb before the finish.  We were together as a group but alone in our effort, all because we wanted something greater: to be professional racing cyclists tearing over mountains in the Tour de France.  We were on our way to achieving the dream and now was not the time to give in.

I had moved to the French Alps to race as an amateur when I was twenty, but despite my youth, I was already starting to ride and feel the way my hero did, or so I thought.  I had that sensation of flight – when the bike moves fluidly beneath the rider for an hour, swaying as he rides out of the saddle, ticking like a metronome as he sits firmly back down, his breath in time with his legs and the potency of the pedal stroke, increasing only as he snakes through the switchbacks.

In cycling nothing is comparable to climbing.  And that may be true for life in general.  Many of my finest days have been on a bicycle in the mountains.  As a child, small hills were my Alpine passes; the feeling of arriving at the top, having pedaled to get there, was unparalleled.

The mechanic butted his cigarette out in the ashtray and held me tight, shaking me to get the blood flowing.  On his breath I could smell booze laced with cigarettes. I felt the grease on his hands but I didn’t push him off; I was too tired, too dismayed, and the human touch was comforting and consoling.  I closed my eyes, delirious from the cold, not wanting to admit that my race was over.

He had stopped with his directeur sportif after passing me on the descent.  Like most pro cyclists desperate to make it to the line, I said ‘No, I am going to keep going.’  They pulled me off my bike, insisting that I stop, for fear I would lose more than just a bike race.  Hours later I woke in another car, the Canadian team van, parked outside the team hotel.  Over one hundred riders had started the race, but fewer than forty had finished.

Three-and-a-half months before, I’d been watching the Tour de France on television in a German hotel room, with my teammate Steve Bauer.  We were preparing for the Atlanta Olympics.  I was a young amateur, Bauer was an old pro.  As the race went up and over the summit of the Cormet de Roselend, the commentators listed the riders and their time gaps.  Ullrich, Riis, Virenque, Escartin, Leblanc…it was 1996.  They were flying.

On television, it looked easy.  I could be there with them, I thought.  Bauer had ridden fourteen Tours, had been placed fourth once, and had worn the yellow jersey several times.  His commentary was unlike any other:  he knew the riders personally and seemed to recognize every kilometre of tarmac.  As the group – a few dozen riders – threaded their way down the sinuous wet mountainside, he told me that there was a dangerous corner coming up and that crashes happened at that spot.  Moments later, a rider missed the corner and shot off the road, sailing and then disappearing into the dense trees.  The commentators were in shock.  Steve said nothing, his eyes wide with fear for a compatriot.  Within seconds, motorcyclists and team cars had stopped.  They were pulling a rider out of the bushes 10 m or more down the embankment:  #81, Johan Bruyneel.  Having dodged death and with barely a scratch, he climbed on a spare bike and sped off in pursuit of the group.

Months later, I saw the same corner as I raced up and over the mountain in the tour de L’Avenir.  Under the falling snow I thought, ‘We are always at the mercy of the mountains, no matter how good or fit we are.’  Cyclists learn, with experience, to respect the mountains.  There are few passes that haven’t marked me in body and in spirit. The good and the bad memories stay, as do the scars I bear from the crashes that occurred as I hurtled down the descents.  The trophies are now in cabinets, and boxes of memories mark the mountains I triumphed on.  I remember the gear ratios I rode, the riders I was with, the weather that seared our skin or froze our bones, and the times I bonked and buckled under the efforts.  And I remember when I flew, amazing myself that I could travel so fast.

Those contrasts are what build the adventure.  On a mountainside, a cyclist can pedal a rhythm that focuses his thoughts.  He can let his breath set his pace with a smooth intensity and find serenity in the effort.  For that, I will pedal up mountains until I am too old or broken to climb on a bicycle.

An excerpt from Mountains: Epic Cycling Climbs by Michael Barry. Photography by Michael Blann. The book is filled with stunningly beautiful photos of the majority of the mountains which have influenced bike races. With each series of photos a professional cyclist has written a reflection on his/her experience on the climb.

One thought on “Stagiaire.”