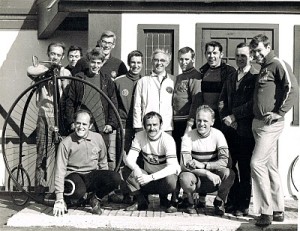 As spring nears and buds are on the trees, thoughts turn to club rides, racing for hill tops, stopping at coffee shops, and sprinting for town signs. Many of the first cycling clubs across North America were started by European immigrants who had grown up learning to ride with their club mates overseas. Ken Smith, a promotor of cycling in Canada on every level, an author, the executive director of Canadian Cycling, wrote a few stories years ago about his experiences riding with his club in the UK, which we found in an old file and have included below. Fortunately, many things have changed, while others, such as enjoying a good day out on the bike with some friends, have not. Ken was also a great friend of Mike Barry Sr’s. Ken had Mike build him a Mariposa fitted with a Paris Roubaix gear.  Although we are not able to ride together outdoors in groups now due to the Coronavirus, we look forward to being on the road and trails soon.

When I joined the Balham C.C. in 1936 when at age 16 it was an all-male, macho club with the basic philosophy: “If you don’t like us, go somewhere else”. They did not welcome newcomers, especially youngsters.

My first club run set the pattern for the future. I was on my recently purchased BSA Golden Wings, a bike I cherished and regularly polished, which was scornfully dismissed by older members on their Granbys, Neate’s, Selbachs and other names unknown to my novice ears.

The club set off in the usual pattern: two abreast, wending its way through the suburbs of Balham, Tooting and Mitcham and on to Wallington. I was relegated to the back, following with reasonable ease until the hill out of Wallington. It was not a long or steep by any means. But it was enough for the toe-straps tightening brigade to leap into action leaving me floundering in the rear with one or two others. Luckily, Bill Shore shepherded me to Tom Smith’s at Crawley, where the club stopped for lunch.

I soon learned that no one cared whether anyone was dropped, no one waited and if you were dropped, well, hard luck! The club, no doubt, lost some members who did not bother to come on a second run. But I stuck it out. In a couple of months I got the hang of the system and relished the fact that I was dropping new members and becoming accepted. 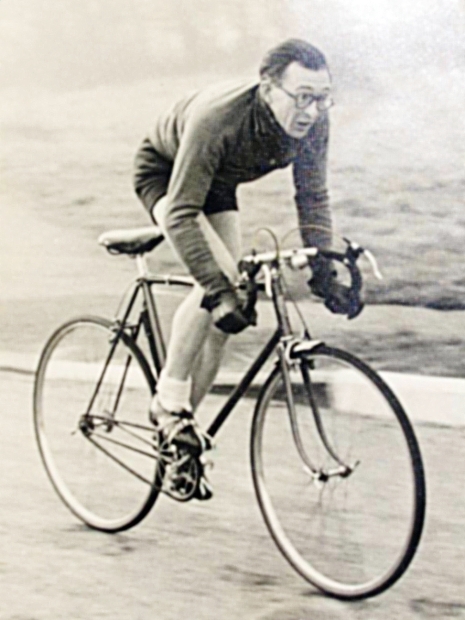 When February rolled round, the opening event was the ‘blind’ to Worthing. Between 12 and 30 hardy and eager, early season fitness fans would ride off into the dimly lit streets of Morden. They were impervious to the chilly, damp weather, and keen to shed flab accumulated during the social season.

The route was a 25 mile circuit straight along the Kingston Bypass. The group negotiated the several roundabouts in a long snaking string, each following the wheel in front, weaving in and out of traffic and parked cars. Then the bunch turned left on the Chessington Road plunging into unlit country—total blackness without street lights. Inadequate battery lamps wobbling on handlebars barely illuminated the road and grass verge.

Passing Chessington Zoo on the right, no doubt much to the amazement of the caged animals, the riders tackled Telegraph Hill, a short but steep climb, then swooped down to the Leatherhead roundabout and on to Epsom for a final sprint at ‘The George’ at Morden.  It took just over an hour for this hair-raising run, which was sometimes on wet roads, sometimes in rain and always chilly.

There were breaks, riders dropped, and those who felt unsure following a wheel in less than ideal conditions who were surreptitiously dropped off the back. Those riders faced a lone ride home as there was no chance of regaining the fast-moving leading group. There was no stopping for dropped riders, friends, punctures or mechanical failures.

Everyone off the back was on his own. The only occasion I can remember a general halt was when the group had a major ‘clatter’ (crash) just on the approach to Telegraph Hill.

After a few sessions with this school, the uninitiated rapidly learned basic riding skills, wheel following, changing, not overlapping wheels, leaving the brakes alone, relying on the fixed wheel and staying upright in a snaking, speeding group of competitive bike riders. There was no better school for learning bike handling techniques.

Close encounter with a cat

It happened on the annual February bash to Worthing. After a hard but uneventful run, we were back at the Ivydene in Epsom for the usual tea of poached eggs on toast, mountains of bread and butter and unlimited gallons of thick, strong tea. The 10 to 12 mile ride home was a usually uneventful affair in the pitch black that culminatied with a general all-out sprint in Morden.

A mile from the rise, toe straps tightened, with a watchful eye on the other dozen riders, my anticipation was broken by a cat running into the road. I saw it at the last moment, just as it collided with my front wheel, sending me upward in a graceful arc before landing with a thump on the highway as others behind clattering into my bike. Picking myself up I found a bent rear wheel, a broken pedal spindle, a slightly bent crank, torn plus fours and sweater and minor cuts and bruises. By a miracle, the front wheel was intact, hardly out of true. No one else was seriously hurt and my bike was the only one damaged.

The rear wheel was soon straightened (a suitable drain cover helped!). To get home required riding on one leg, an annoying physical exertion bearing in mind that I had already ridden over 100 miles, most of it at a fairly rapid pace.

When I saw my mother the next morning she showed little surprise at my bruised condition and she readily agreed to patch my plus fours and sweater, after all, what can be expected from a son who constantly rides his bike at a furious rate. She never did understand.

Close encounter on the tandem

On the  August 20, 1939, Harold Sharpe and I did our one-and-only training ride on a borrowed tandem in preparation for the Crouch Hill Tandem “50” time trial the following Sunday. The tandem. was an old touring model with minimal stopping power and a top gear of 104  inches. We belted down the Brighton Road to our seaside destination, Brighton. On the return trip we met the club at ‘the Chequers’ at Horley, just in time for an evening pint.

One pint followed another until closing time. We were well fortified and eager to get on the road for the 25 mile trip home. But first of all we needed to get some solid sustenance at the small cafe next door which was still open. After a steak and chips washed down with thick tea we were on our way amongst the steady stream of traffic.

On the tandem, with our top gear humming, we roared up the Brighton Road, in and out of the weekend returning traffic which was generally not moving as fast as we were. As the steersman and feeling little pain, I decided to ride on the centre dividing line.

All was well until we came to a traffic hold-up on the outskirts of Mitcham. I was slowing but the inadequate brakes were doing very little before the back brake cable snapped. Looming ahead was a motorcycle combination, its driver and passenger completely unaware of the tandem hurtling down behind. The only opening I could see was the space between the motor-cycle and the side car. Our front wheel slotted in nicely, coming to a jarring halt and giving the motorcycle driver, the fit of his life. Luckily, little damage was done to the tandem. A slight buckle in the front wheel was easily straightened.

After apologizing to the driver (I forgot what was actually said but it was not appropriate language for a Sunday night conversation), Harold an I rode home slowly with our front brake as the sole means of slowing. Actual stopping was accomplished by dragging our feet on the road.

The next day  a new cable was fitted and the Crouch Hill “50” saw us on the start line. 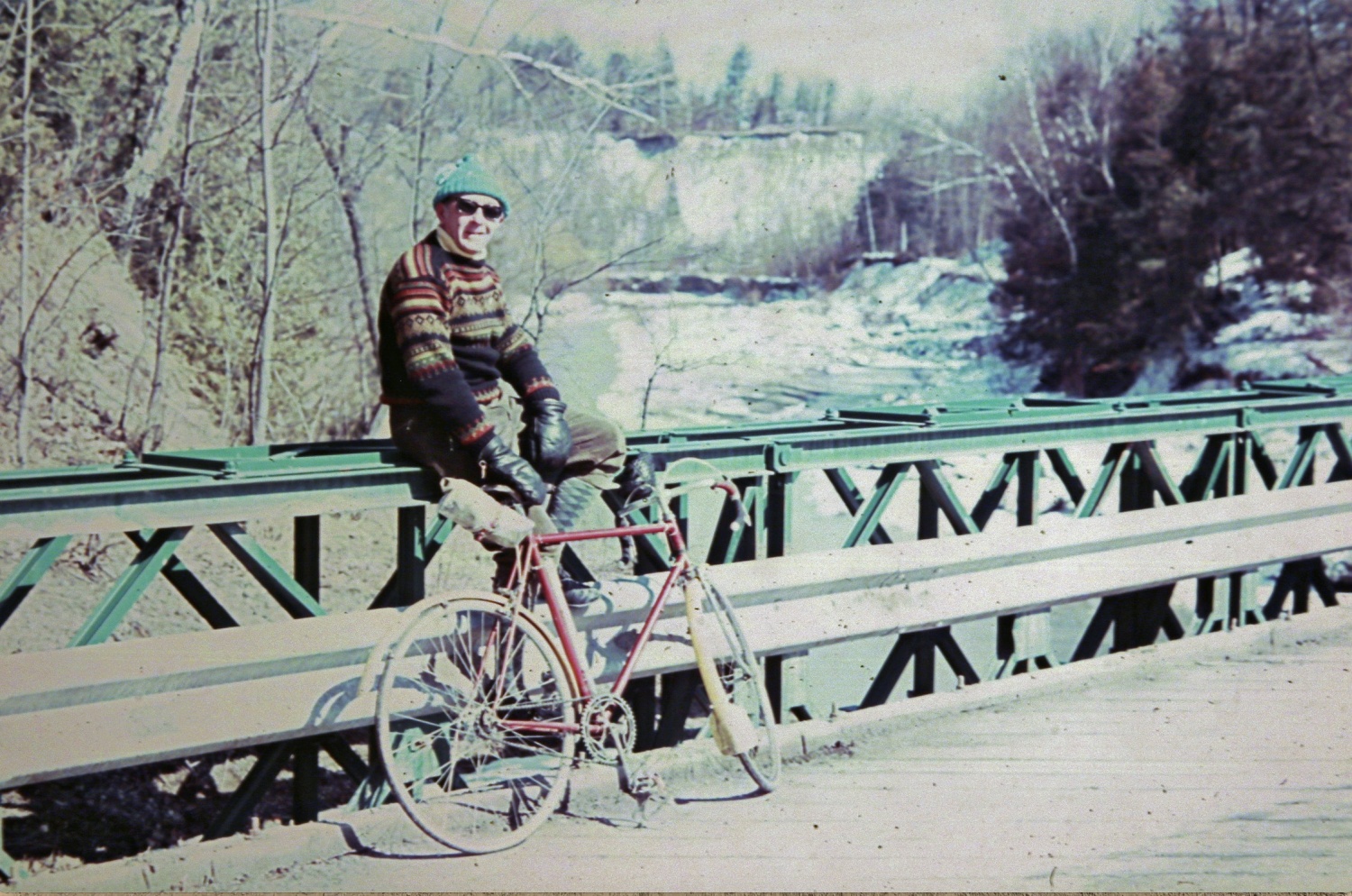