The Best Of Rides: Watching The Tour De France In The Pyrenees 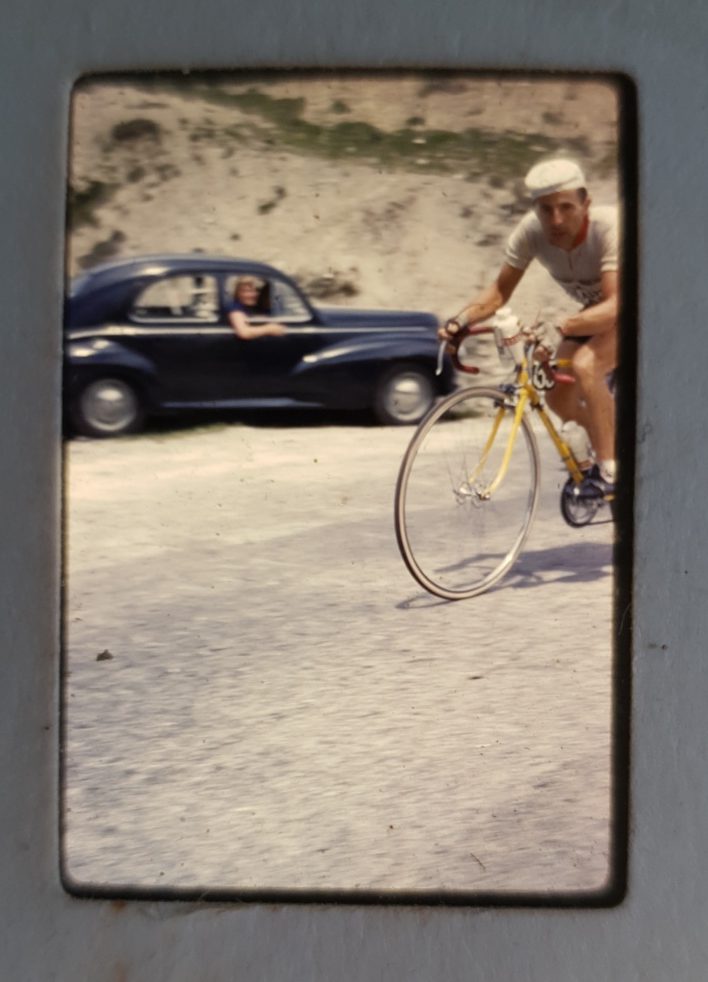 A few years ago, a friend asked my father if he could recount his most memorable cycling experience. Having spent a lifetime on his bike, he had many, but distilled a few down into an email. Hunting through my messages, I came across the email and thought I would share it.

Like my father, I’ve enjoyed some of my best moments on a bicycle in the Pyrenees. The majestic beauty of the mountains is combined with quiet narrow roads that wind their way over the peaks and along the rivers that cut through the gorges and valleys. Often the climbs are well above the tree line, which improves the view of the surrounding countryside. As the south of France is less populated than the north, and less affluent, there is less traffic, the towns are small and, for city dwellers like us, the area provides an escape.

My father had many great adventures on a bike from a young age. When he was 11, he rode his mom’s Raleigh city bike the 100 miles from London to Brighton and back with a friend on many weekends during the summer.  They would play on the beach, dip their feet in the water, and then head home before dark—quite an adventure for a pair of kids. From that point on, he was always on a bike, touring the English countryside and then, in his midteens, the European continent. Without a father, and a mother who worked long hours, the trips were alone or, more often, with friends. 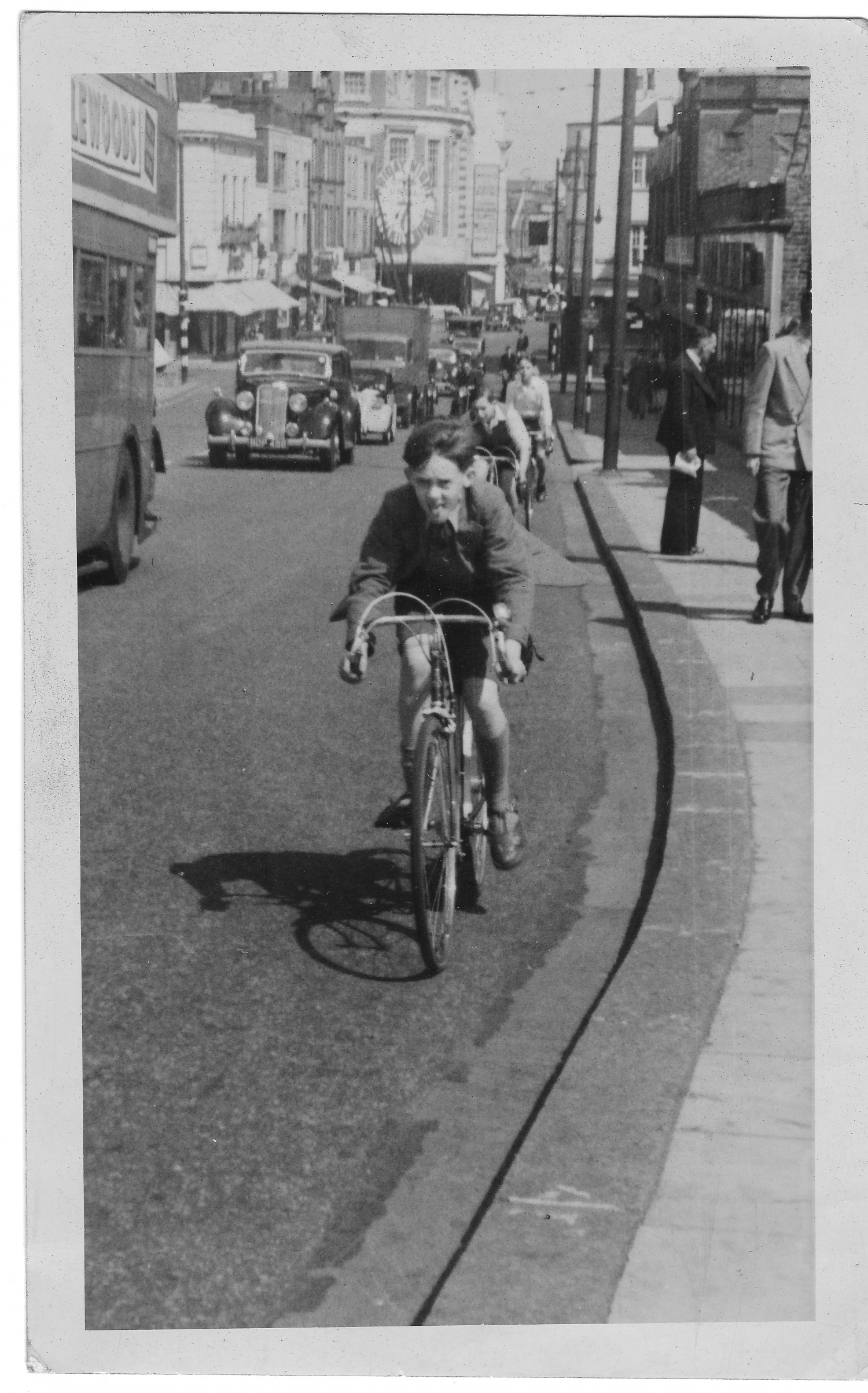 Mike riding through the streets of London in the late 1940s. Tongue out with the hammer down.

“My most memorable experience”. M.J.Barry

I have many family occasions  but there a few cycling memories that really stand out, all are related to climbs in the Alps or Pyrenees.Of course the climb of the Ventoux with Michael on the tandem is a stand-out memory . 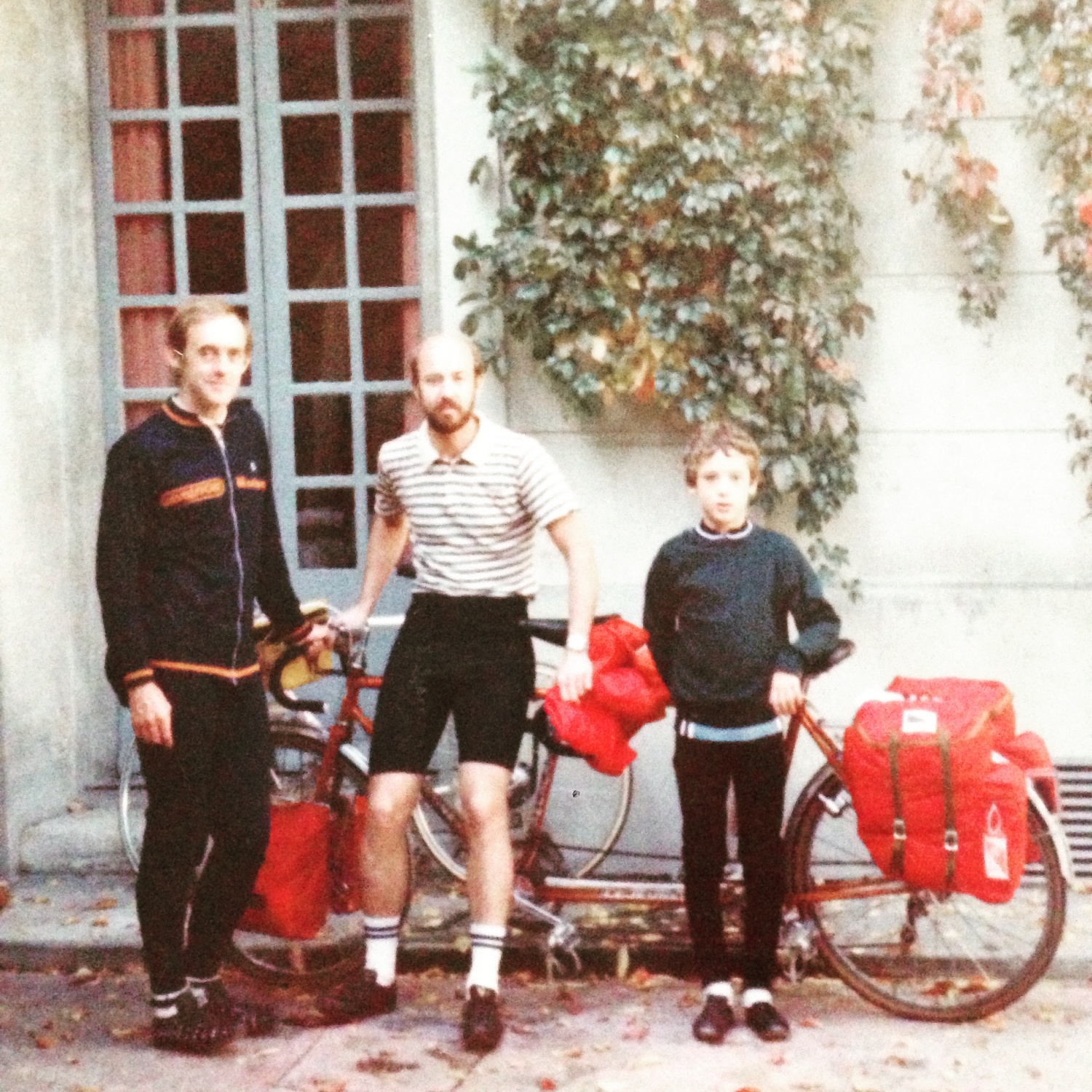 Mike Sr., Ralph Lapp and Michael Jr. at the base of Mount Ventoux in 1983.

Another is the occasion that I climbed the Aubisque alone on a beautiful summer day. I was climbing really well and singing at the top of my voice. I can’t imagine now what I was singing. When I descended down to Pau I entered the town just as workers were leaving the factories at the end of the day. I tucked in behind a guy on a moped who really got into it, going at full throttle and calling over his shoulder “Allez Gautier”. Bernard Gautier was a renowned pace follower having won Bordeaux-Paris, a race run behind motor pace.

However probably the most memorable ride was in 1957 and the first time that I went to the Pyrenees, which was also the first time I had ever seen real mountains. I travelled down from London by train with my good friend Rhett to watch the Tour de France. We got off the train in Pierrefitte-Nestalas into a gloomy day with light rain. Although we were right at the bottom of the mountains we could see nothing but cloud. We were loaded with camping gear and decided to set off over the Tourmalet with the intention of looking for a camping site at the end of the day. The climb to the top of the pass took a couple of hours but was completely in cloud. When we arrived at the cafe at the summit we had not seen anything of the mountains, just fog. On the descent we suddenly broke out of the cloud by a flat meadow, an ideal camping spot. A small hotel close by provided us with a wonderful supper and we retired to our tent having spent a memorable day in the highest Pyrenean peaks without seeing a mountain. Just our legs told us we had been over one. 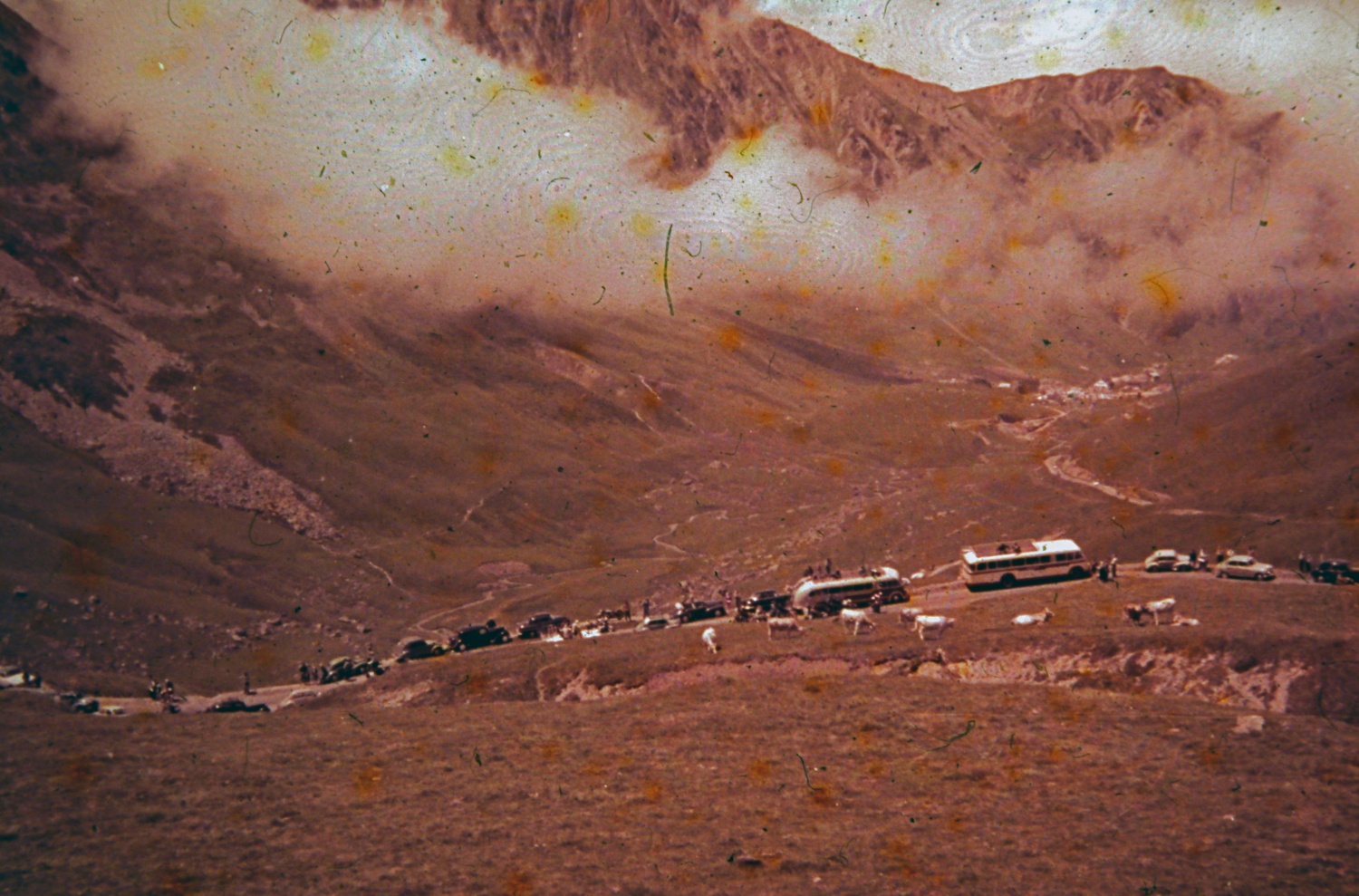 The next morning I awoke in a tent lit up with bright morning sun. I poked my head outside and was breathless at the beauty surrounding us. The most wonderful scene that I have ever seen. Marvellous snow-peaked mountains towering all around, bright green meadows and rushing mountain streams. I woke Rhett and he appeared bleary eyed until he saw the surrounding beauty. His eyes were then wide at the spectacle. We spent the day walking in the lower slopes and cooking ourselves a meal.

The next morning we awoke to another perfect day but the scene had changed. The road up the pass was full of spectators for the Tour that was due to come through some hours later. In 1957 there weren’t too many cars but families walking, guys cycling, the odd moped and motorcycle chugging, a few 2CVs and Renaults and quite a few buses. After breakfast we too joined the throngs moving upwards. We selected a spot close to the top of the pass and enjoyed a great day watching the Tour cavalcade. Anquetil was in the yellow jersey and received a tremendous reception from the crowd. 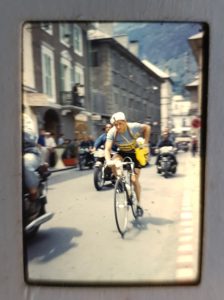 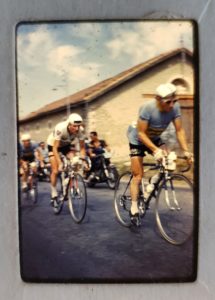 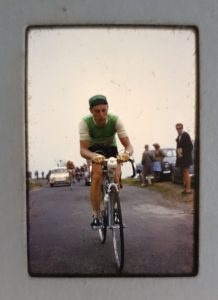 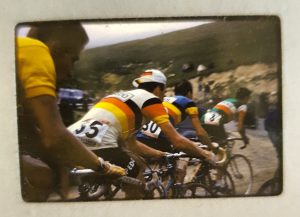 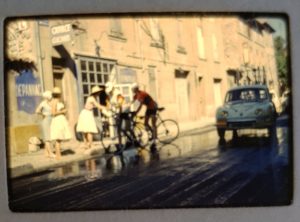 Snapshots taken by Rhett from the 1957 Tour de France.

Maybe it was because it was the first occasion that I had seen the high mountains but the Pyrenees have always remained my favourite mountains.  I have since ridden the Raid Pyrenean twice, an event that traverses the range from East to West climbing eighteen passes in 750 km. The first occasion gave me the inspiration to form the Toronto Randonneurs a long distance cycling club. (Now called Randonneurs Ontario). 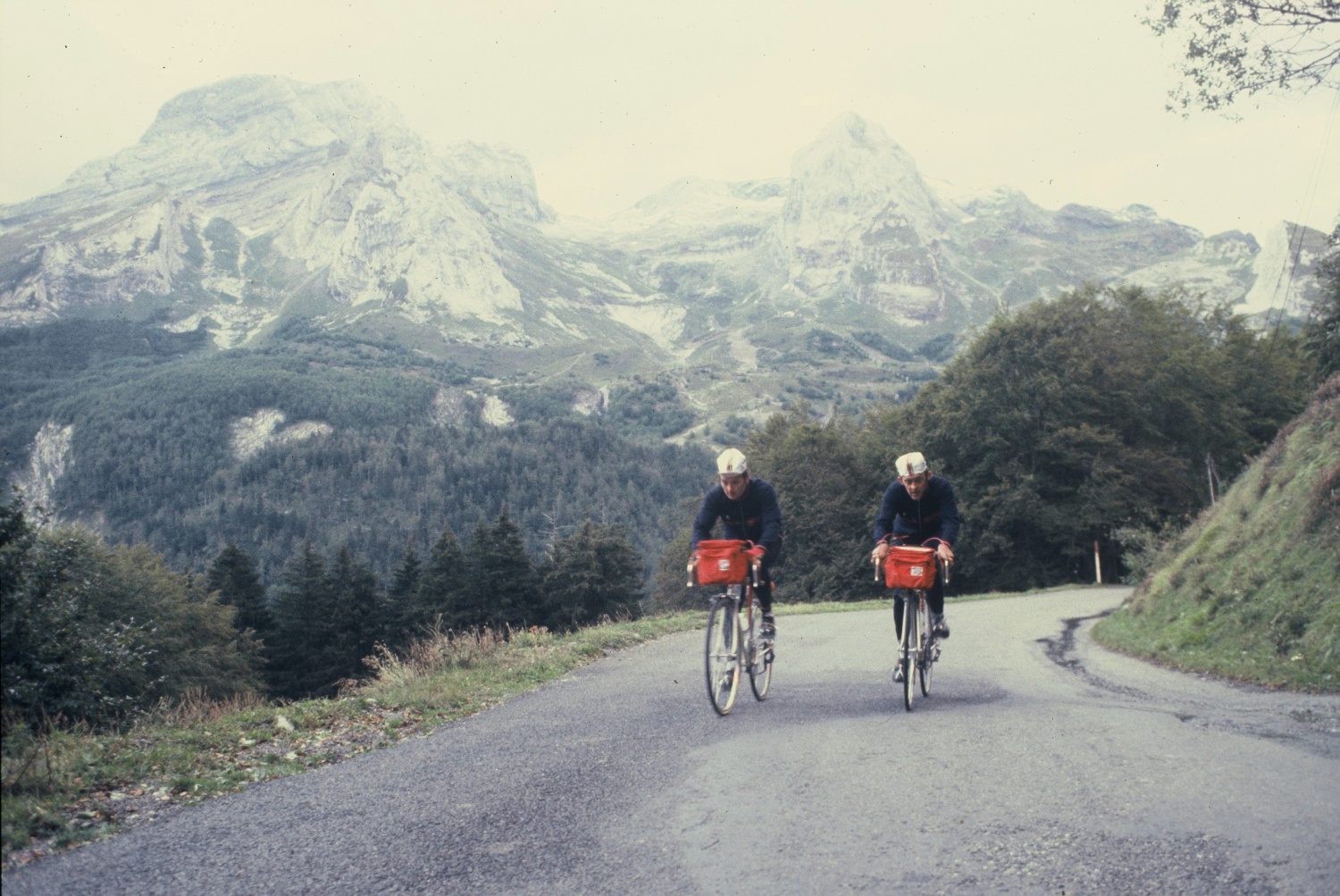 In a conversation a few years ago, while we were in London, England, Rhett recalled another of one of his  trips to the Tour de France with my father.  They had travelled to Paris to watch the finish of the race at Parc des Princes, the velodrome in central Paris on which the Tour used to finish before the Champs d’Elysess finish line was adopted. As they didn’t have the money to pay the entry into the velodrome they watched from the outside as the peloton sped through the gates and onto the track, Roger Walkoviak the 1956 winner in yellow. After the finish, they snuck into the velodrome through the gates as there was a track meet scheduled to take place, with all the top international track racers. As they found a spot to watch, a downpour began, making the track unrideable. To avoid cancelling the meet, the organizers poured fuel on the surface, and lit it on fire to dry it out, which of course, was quite a spectacle. As the racing began, the most exciting of the events was the motorpaced races where the cyclists were tucked into the slipstream of massive motorocycles that roared around with flames coming out of their exhaust pipes.  For two teens from outside of London it was quite a circus which became a fond memory.

13 thoughts on “The Best Of Rides: Watching The Tour De France In The Pyrenees”