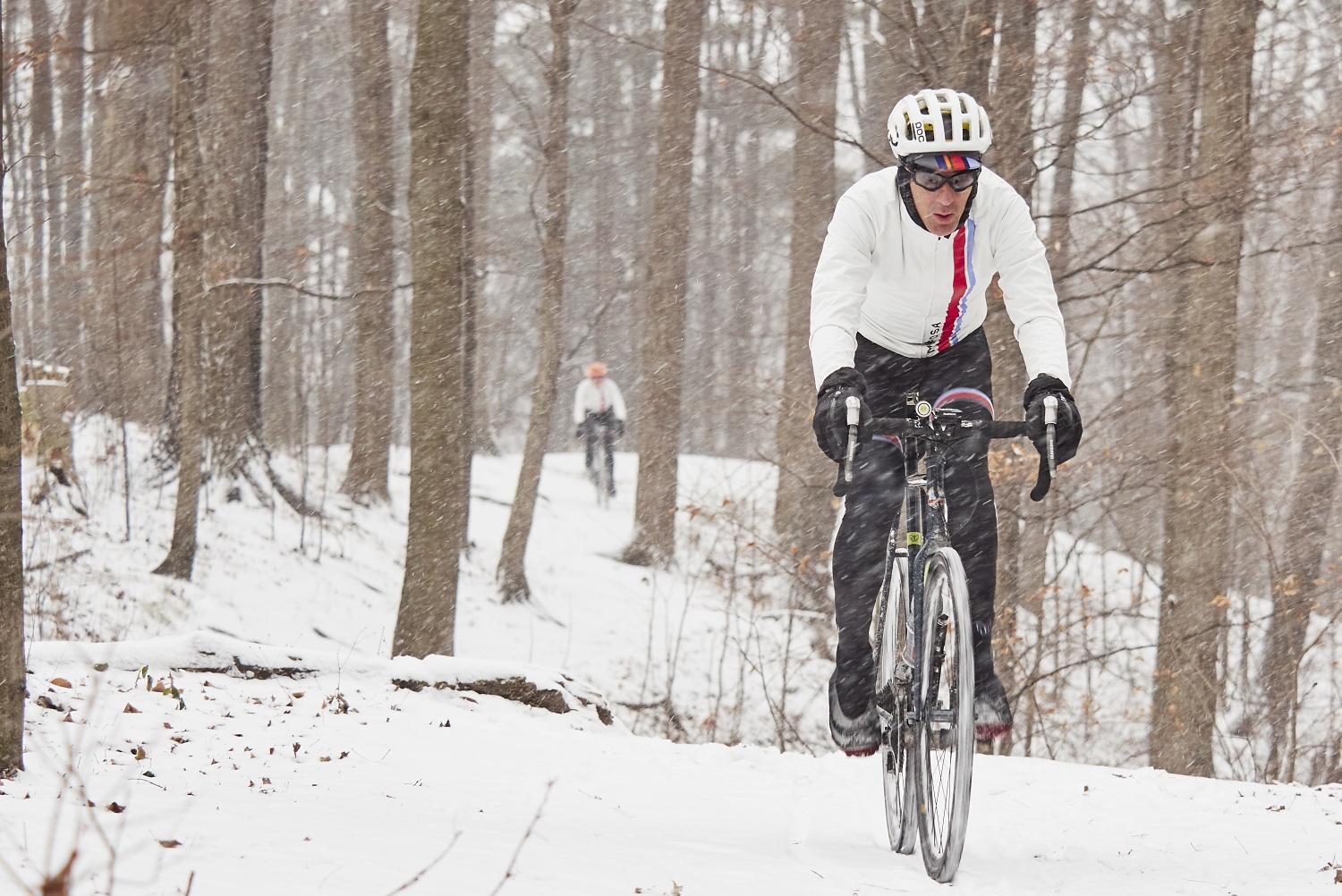 My math homework half completed and Bob Dylan on the turntable, I looked out the window as snow began to fall. First a few scattered flakes spotted the sky but, soon enough, it was accumulating. Cars passed the house tracing lines down the middle of the street in the fresh powder. The days of December were the shortest of the year and, even though it wasn’t yet five o’clock, grey was turning to black. The streetlights would soon come on, illuminating the falling snow. As it blanketed everything in white, the sounds of the city would be muffled and then die.

The phone rang. In haste, I slid across the hardwood dining room floor in my stocking feet to pick up the receiver. It’s Joe. “Let’s meet up to ride this evening.” Of course, I agreed. We’ve ridden through the neighborhoods covered in fresh snow at night many times before. Nothing compares. “I’ll be over at 8– after dinner.”

These evening rides, like our long rides on the gravel roads north of the city, and our romps in the park over stumps and roots, were where I learned the skills that I used later in life and still today. Not only were we having a blast on our bikes but also we were becoming better cyclists, and discovering the city and ourselves. But, at the time I never thought of the practical aspects of what I was doing– it was all for fun and my parents encouraged the adventures.

The bikes we rode were nothing special. Joe’s was an old blue and white Mercier that he found in his neighbour’s garbage. As soon as he saw it, he knew the old ’70’s race bike could become a good treader. With the Mafac Racer brakes and decent clearance on the frame, he could fit some mudguards. We stripped off the Simplex gears, my father re-dished the wheel, and threaded on a fixed cog. The bars were re-taped with fresh cloth tape and we attached some white Bluemels mudguards. My treader was similar: an old pearl white Bianchi Cromor frame with 650 B wheels, aluminum mudguards, a TA chainset, fixed wheel, and, again, Mafac Racer brakes with Mafac levers. The bikes were efficient, ran freely in the snow and muck, and made good training and commuting bikes during the long Toronto winters. They could survive 14 year olds thrashing them in all conditions.

Bundled in our winter parkas, jeans, wool socks and wool cycling hats, we rode through the city streets. The roads were now quiet, the evening commute over, with most people tucking into a meal or sitting on the chesterfield in front of the television to watch Wendel Clark, Doug Gilmore and the Leafs. Under a layer of white, the city became magical. The streets felt like ours.

With nothing more than regular file tread road tires, the bikes slipped and slid. Kicking back on the fixed wheel, we’d skid leaving a snake’s track in the snow. The fixed wheel gave us more control in the snow, keeping our hands off the brakes and the bike stable beneath us. Riding on the snow and ice isn’t much different than riding on wet cobbles or a muddy track. In adverse conditions, the bike needs to become an extension of the body; movements have to be coordinated, in unison, as balance, and weight-shift keep the bike upright and moving forward. Grip the bars too tightly and control of the steering is lost, push the pedals unevenly and the bike will veer and slide. Without fear of crashing, our bodies were loose as our legs stabilized the bikes and ploughed through the powder.

Plumes of powder came off Joe’s tires as he sped ahead and into a corner. I took off after him. We passed the local park with its brightly lit outdoor hockey rink. Kids shoveled off the snow to clear the ice so the puck would move. I recognized some of them as I played shinny with them once a week, or more. I’d ride over, my stick strapped to my top tube with two leather toe straps and my skates and gloves in a backpack.

Even though it was well below freezing, I started to sweat under the winter coat. My hands were clammy in my wool and leather mitts. Joe’s cheeks were flush. Leaning up against him, as we pedaled, we pushed and shoved, a friendly teenage wrestling match on bikes. We skidded and slipped and relented so we didn’t fall.

Close to my home, we sprinted up the street to the house, as we always did and as I had since I was a small boy. We found our lines down the car tracks, where the snow was packed and faster. 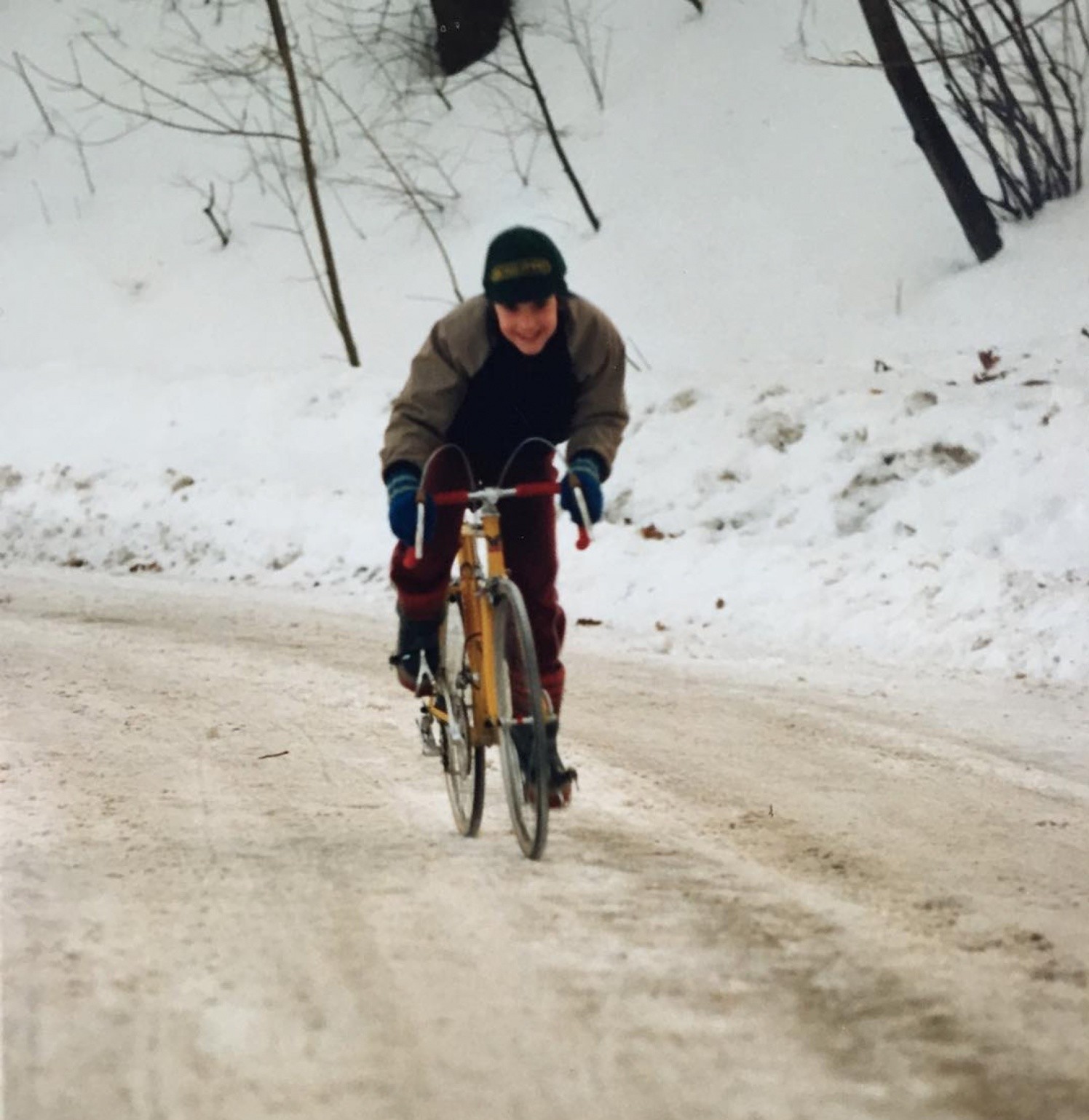 The warmth of the house welcomed us. My father smiled as we opened the door knowing the fun we’d had. Mom put the kettle on. We’d pull off our layers, drink tea, eat cookies, put on a record album and talk about bikes and the coming season. There weren’t many better ways to end a day. 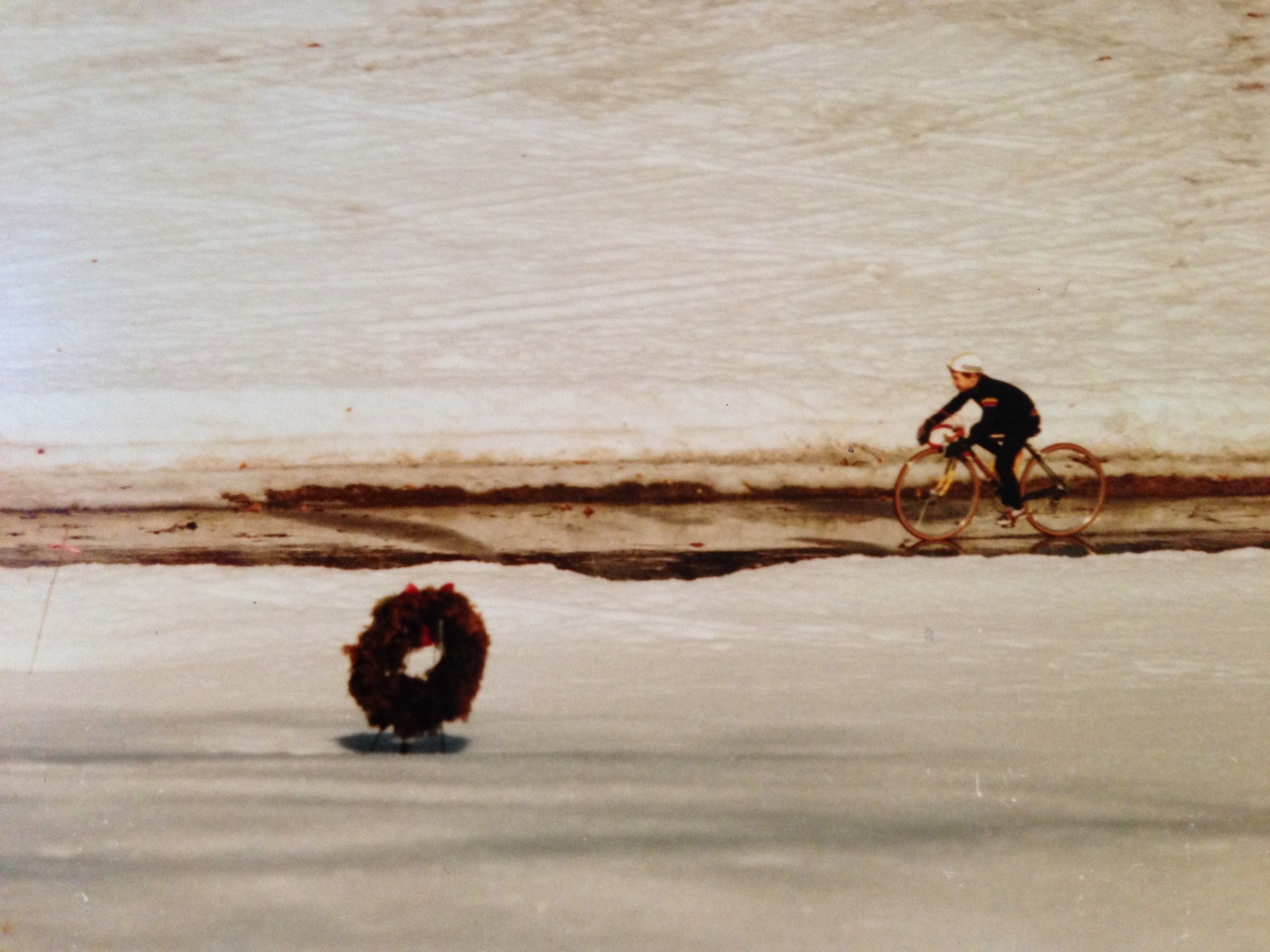