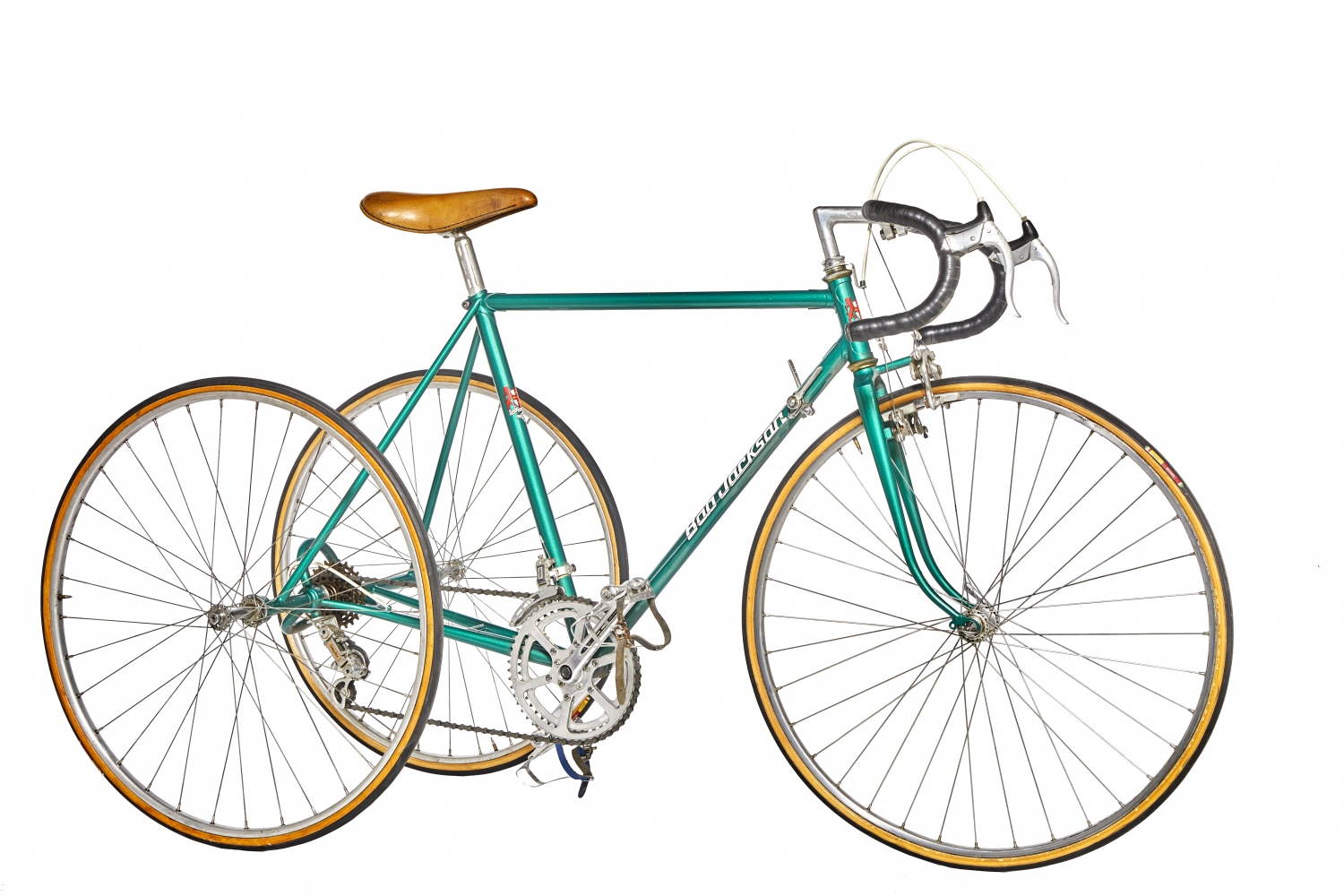 Bob Jackson, J.R. (John Robert) Jackson, first opened shop in Leeds in 1935 as J.R.J. Cycles using money borrowed from his mother. He built bikes until WWII when all production had to be put on hold while Jackson served in the Royal Air Force. After the war, he restarted his bike-building business in full force, and in 1955 was able to purchase the historic British Merlin brand to begin producing Merlin frames in parallel with his J.R.J. frames.

By the 1960s the company’s reputation as a quality builder of lightweight road and track frames had grown both in Britain and the U.S., and Jackson was handling production for multiple other bicycle brands as well. Eventually, a name change took place, and J.R.J. was dropped in favor of the more colloquial Bob Jackson moniker, and Bob Jackson Cycles continues to build frames under that name today even though Jackson passed away in 1999.

This tricycle was built in the 1970s with a mix of Campagnolo and Simplex components. The frame’s shape is what would be considered standard for a classic English or European racing tricycle, essentially a double-diamond frame with the stays supporting a wide rear axle.

The axle has bottom bracket cups threaded into each end, and each cup supports a unique extra-long spindle that the rear wheels are designed to fit onto. The spindles are keyed on the ends and have an expanding wedge at the base to hold the wheels in place. The rear hubs have no bearings; instead, they spin on the bearings in the bottom bracket cups, similar to a car axle.

The rear axle is also split at the cassette so that it only drives the left (non-drive side) wheel. This is necessary, because the wheels have to spin at different speeds during turns. If they were joined by a solid rear axle, the outside wheel would be unable to spin faster, and thus the bike would plow into turns and become difficult to handle. Cars have solved this problem with differentials, which allow the wheels to turn at different speeds. Now small, lightweight differentials are available for those seeking to build a two-wheel-drive trike, but in the Bob Jackson’s time, such options didn’t exist. The issue could also be potentially remedied by always cornering hard enough to lift the inside wheel off the ground, but it’s perhaps more practical to simply drive one wheel.

A particularly unique feature is that this tricycle has two front brakes, both mounted to the front fork. This was done as a clever way to satisfy UCI regulations, which require racing bikes to have two brakes. Before the advent of modern hub-mounted disc brakes, putting a brake on either of the rear wheels would have required additional tubing just to support the caliper, adding complexity and weight, so dual front brakes were a common solution for early-racing trikes. 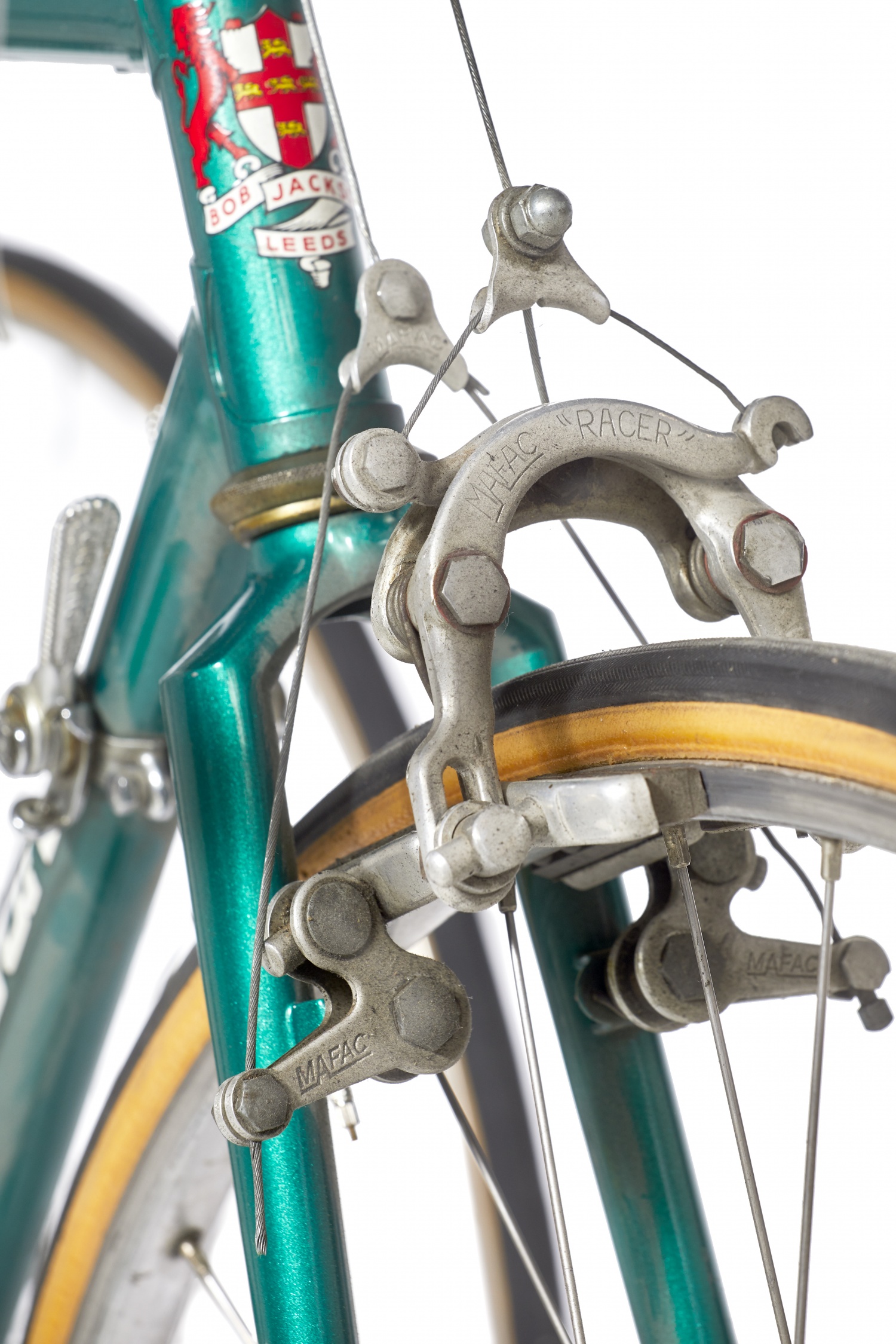 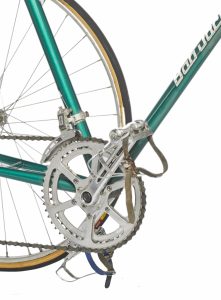 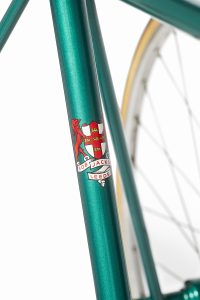 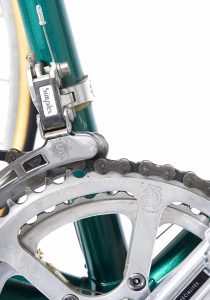 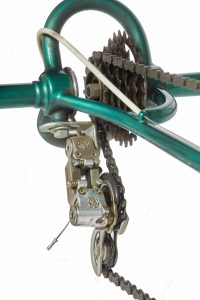 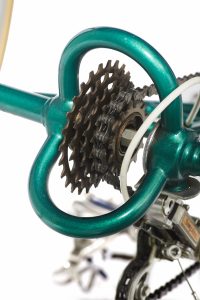 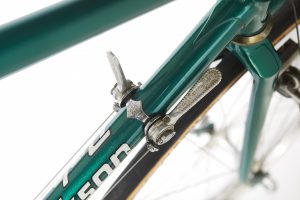 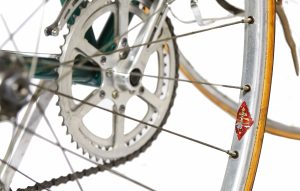 In England, there is a national Tricycle Association which organizes and sanctions tricycle races in which participants race on tricycles like this Bob Jackson.  Footage of the World Tricycle Championship is available for viewing on YouTube. As amusing and comical-looking as it is, the riders participating take it seriously. They lean into corners like a line of MotoGP riders tiptoeing through, a few unlucky souls push just a bit too far and roll over.

This bicycle is currently available for sale in our Bicycle Specialties eBay store.  Buy now >>

“Inside The Pro’s Closet:  Bob Jackson Trike” by Bruce Lin