The Best Of Bike Rides: Lugano ’96 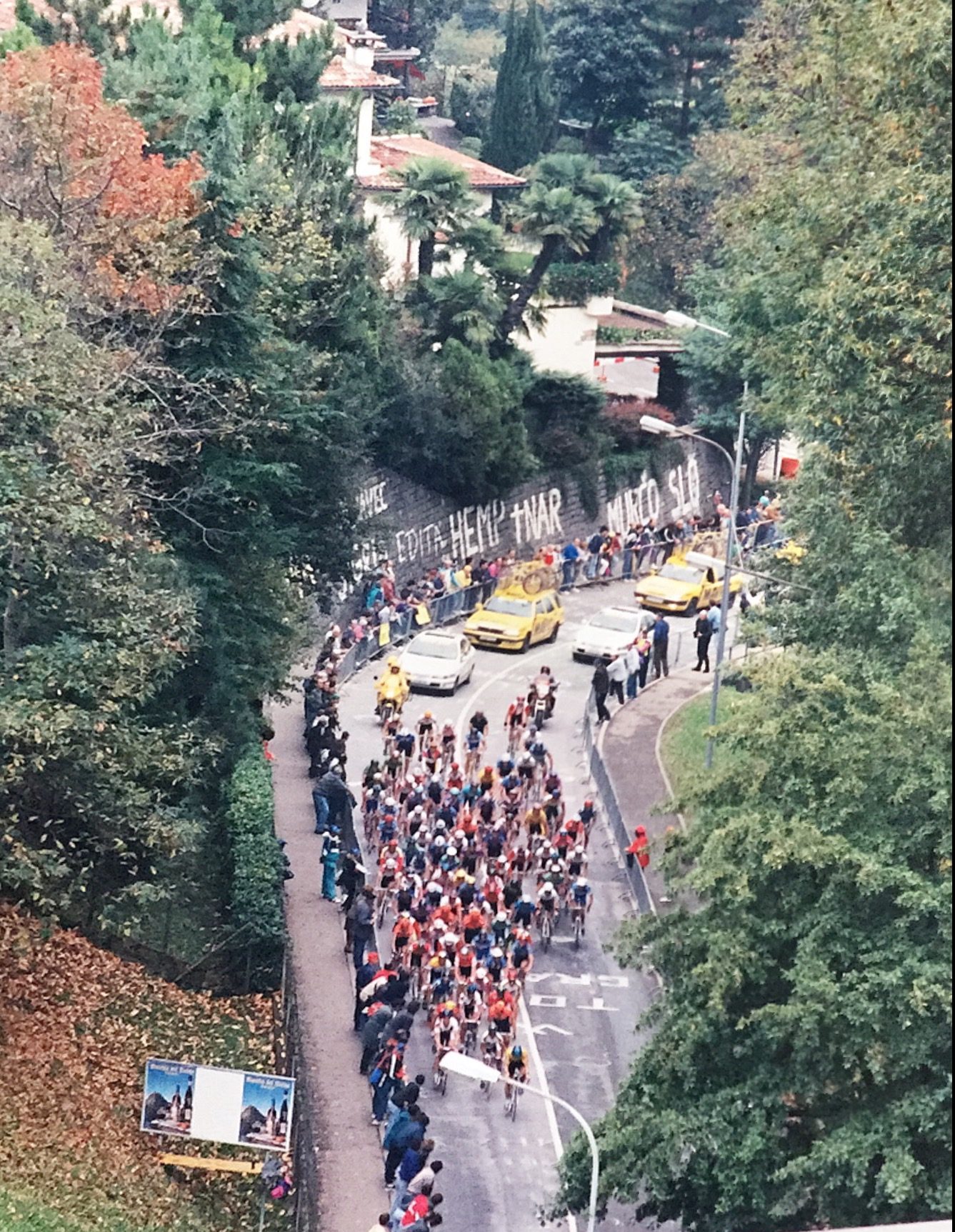 We rode side by side with the lake on our right and, on our left, the lush hillside, the houses, the cutaway cliffs. We sped through the tunnels, our shadows moving ahead of us under the lights before we emerged again into the sunlight. We were accustomed to the roads in Canada, beaten and battered by the winter weather, but here, the smooth tarmac glistened. This felt like the Europe I had imagined: the Professionals’ Europe. The aromas were exotic to us: diesel, fresh bread, perfume, roasting chestnuts, the liniment on our legs. I wanted them to become familiar. 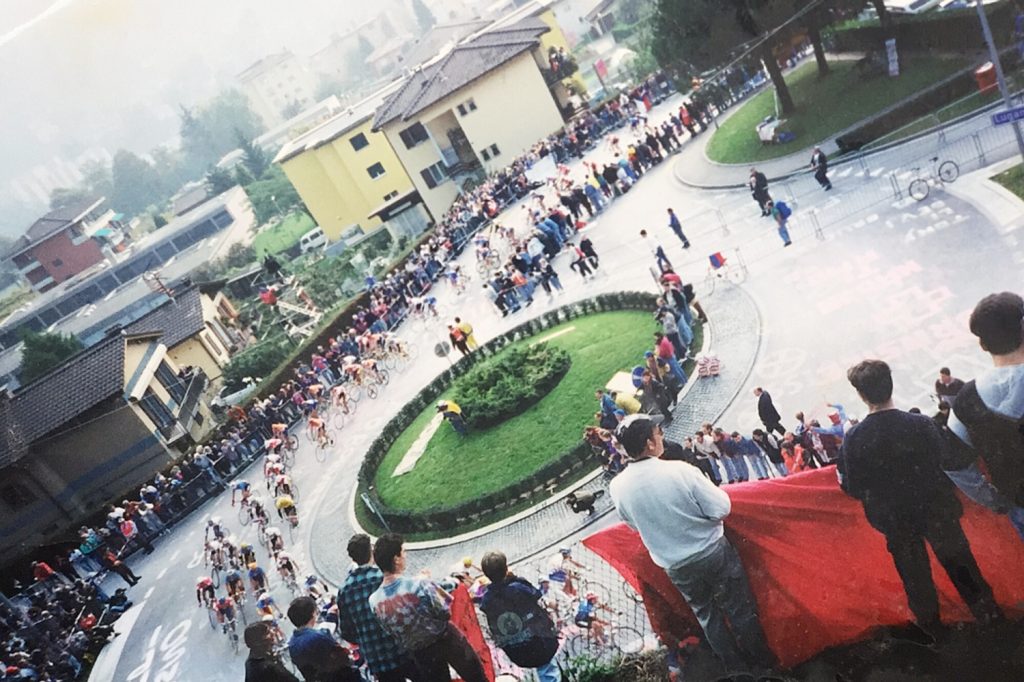 The U-23 Espoir peloton at the 1996 World Championship Road Race in Lugano, Switzerland.

We were a continent away, riding together in anticipation of the World Championships, in Lugano. This was to be our final proper training session before the race: a long ride, that we had loosely marked with a Bic on a Michelin map, around three lakes, Como, Garda and Lugano. We slid the map into our pockets with enough Lira and Swiss francs for food and drinks. With pumps on our top tubes and spares under our saddles, it was all we needed for an adventure. After breakfast we set off from the team hotel on the hillside outside of Lugano, with just a guess of when we might return. It wouldn’t be before lunch but we hoped in time for dinner.

We pedalled with a certain confidence that came from recent victories, good results, and the youthful excitement of possibility. Realities were distant. The sport had not yet broken us. The two of us had grown up in Canada, children of European immigrants who were passionate cyclists. Steve was from Montreal, I from Toronto. 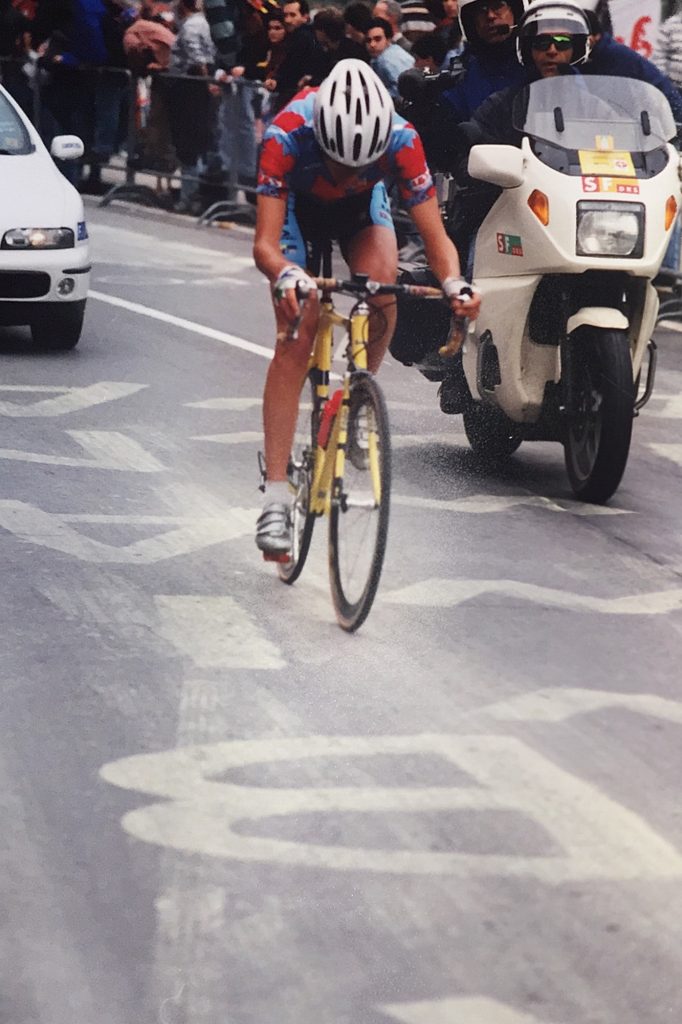 Michael Barry climbing to an 8th place finish in the 1996 World Championship Road Race in the U-23 Espoir Category in Lugano, Switzerland.

The tunnels came more frequently as we neared Como. We were on the course that was used for the Tour of Lombardy. I hoped one day to win that race. I never came close, but I finished it, and that felt good.

As we reached the outskirts of Como, there was a little surge in our pedal stroke. We rose out of our saddles, sprinting to the town sign. Steve was consistently faster in a two-up sprint, and he won this time, too. As I surged I could feel the distance creeping into my leg muscles, which were thinner than they’d ever been. Listening to coaches’ advice, I hadn’t been eating much. I paid attention to every morsel I ingested in order to find the fitness to win. In a few days, at the Worlds, I would finish at the front, with the best, and eating would become a significant part of my job as a cyclist.

Steve had signed a contract with a professional team only a few weeks before we arrived in Lugano. His performance at the Tour of Avenir, a ten-day stage race organized as a mini-Tour de France for young riders, had drawn the attention of the media and all the top professional teams. Excited at the prospect of racing in Europe at the highest level, he, agreed before the race ended to ride for a lower-level pro team. As the race progressed and he continued to perform, his value increased as did his options, But he had already signed the deal, and he knew now that he would likely one day regret, it. But today, along the shores of Lago di Como, Steve rode with bravado.

In Como, we agreed to stop for food at a bar tucked away in the town square. The square was bustling with elegantly dressed afternoon shoppers chatting outside of shops. Cars screeched through the roundabout. A vendor sold fresh roasted chestnuts and their aroma hung heavy in the air. Steve ordered a whole roasted chicken and a glass of pear juice cut 50/50 with milk. He scarfed it all down, leaving only a plate of bare bones on the table. On a map moistened with sweat from my jersey pocket, we studied how far we had to go. The autumn sun was relatively low. The fastest route back was still a long ride, which only added to the thrill of the adventure.

Darkness crept in as we rode over climbs that we had raced on only five days before in Mendrisio. That race, under pouring cold rain, had gone well for me. It was a pro-am event with top talent, in which I competed as an individual racer. On the slopes of Mendrisio, in my French amateur club jersey, with a mismatched bike and a hodgepodge of gear, I had tucked myself tightly behind my hero Tony Rominger’s wheel as he accelerated hard over the summit to rip the peloton to pieces and test his legs. On his wheel, my eyes had shifted between his sprockets and the road ahead. My vision had begun to blur at the top, but I held on. The race finished in a sprint from a group of twenty or so, but by then I knew I had the legs and the guts I needed to compete with the best. Those who performed well in that race would likely animate the World Championships or even win medals.

Steve and I pushed each other as we ascended through the town and down towards Lake Lugano. Cars sped past, their lights now on as the low sun shone over the peaks onto the lake, the palms trees and the boats. I’d seen the same image captured on postcards spinning on racks in the local shops.

As we neared the city of Lugano, we caught up to Jeannie Longo and Catherine Marsal, two French champion cyclists. We could see their race numbers beneath their long-sleeved jerseys. They had just finished first and second in the time trial at the Worlds. Catching a few words of their conversation, we heard them discussing their day and their race as if it was just another mark ticked on the long calendar of events. We sat behind them momentarily, waved a bonjour, and pushed on towards Lugano and the hotel.

Through the ride over the weekend and throughout the following year, I became aware that I could realize my dreams. My heroes became human. Climbs that I’d regarded as iconic were became roads on a map. Idols became teammates and some, lifelong friends.

The sun had tucked itself behind the mountains as we pedalled to the hotel high on the hillside. It was dark now, but our legs were still good and our conversation was still animated. It was the best of bike rides. 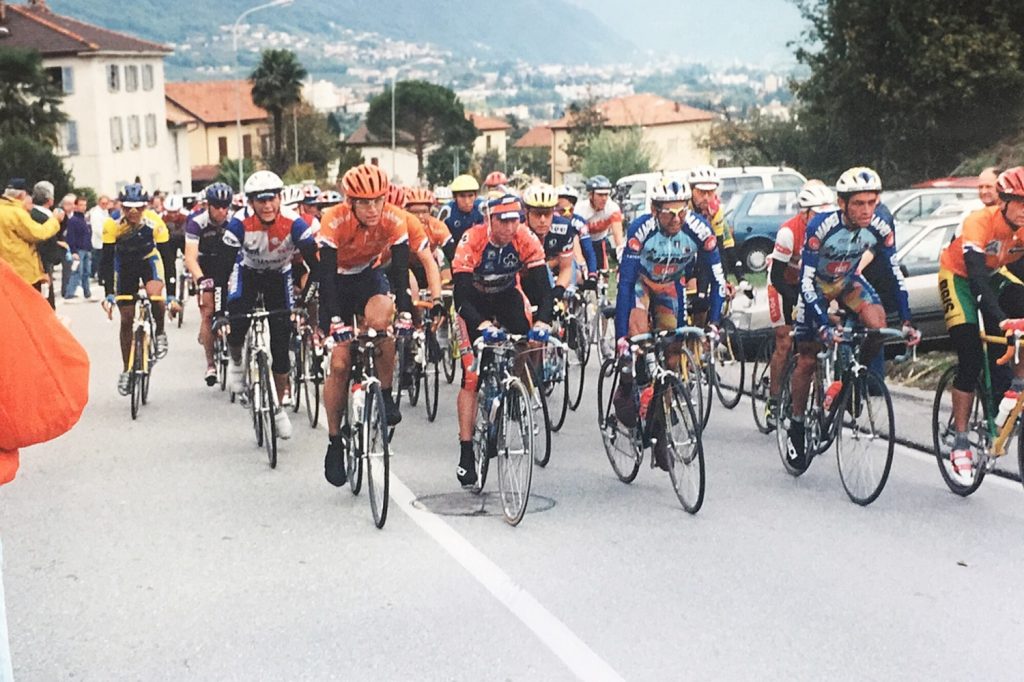 The Peloton in G.P. Mendrisio