Racing The Postman To Ottawa 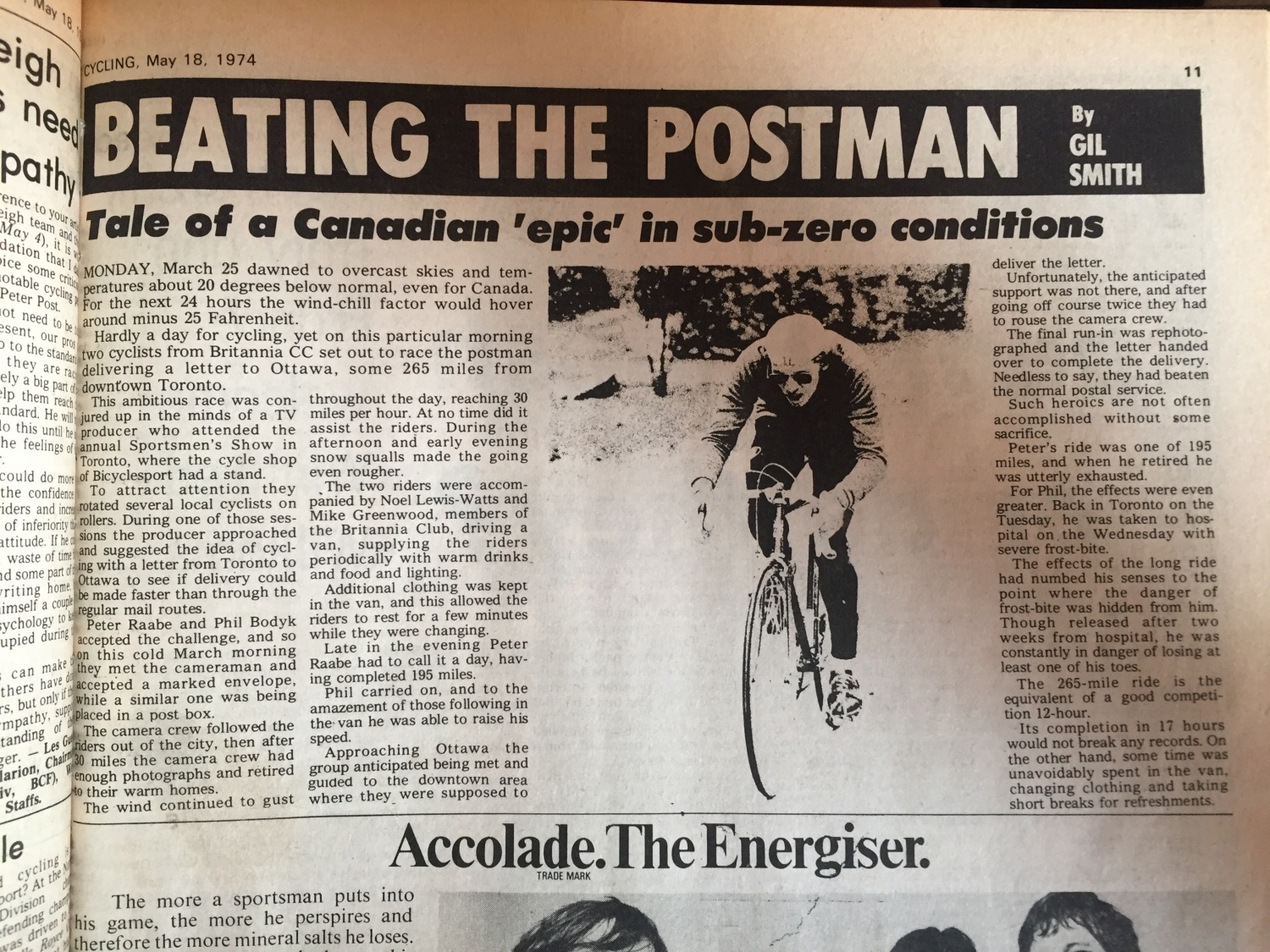 In the winter of 1973, a year after we opened our downtown bike shop, Bicyclesport, we decided to have a booth at the Annual Sportsman’s Show not realizing that the term Sportsman referred to guns and bows and arrows rather than athletic sports like cycling. To attract attention to our display we set up a couple of sets of rollers on which a number of club mates gave displays of riding. They drew large crowds that in turn drew the attention of the CBC.

Around this time Canada Post had a publicity campaign in which they claimed that a letter mailed in any major Canadian city would be delivered by the next day.

A producer at CBC wanted to prove the claim to be false and that a person on a bike could beat the mail.

The following is a report of the ride written by Gil Smith and published in the May 18th 1974 edition of the English magazine Cycling.

“BEATING THE POSTMAN”: Tale of a Canadian “epic” in sub zero conditions
By Gil Smith

March 18 1974 dawned to uncertain skies and temperatures forecast, with wind-chill, of minus 30 degrees C.

Hardly a day for cycling, yet on this particular morning two cyclists from the Britannia Cycling Club set out to race the postman delivering a letter to Ottawa. 285 miles (456 km) from their start in downtown Toronto.

This ambitious race was conjured up in the mind of a CBC TV producer who attended the annual Sportsman’s Show, where the bicycle shop Bicyclesport had a booth.

To attract attention several Britannia Club members were persuaded to ride rollers. During one of these sessions the producer approached and suggested the idea of cycling from Toronto to Ottawa with a letter to see if delivery could be made faster than by regular mail.

Peter Raabe and Phil Bodyk accepted the challenge and so on this cold March morning met the cameraman and accepted a marked envelope while a similar one was being deposited in a post box.

The camera crew followed the riders out of the City, then after thirty miles (48 km) the camera crew had enough photographs and retired to their warm homes.

The wind continued to gust throughout the day reaching thirty miles per hour (48 kph) At no time did it assist the riders. During the late afternoon and early evening snow squalls made the going even tougher.

Noel Lewis-Watts and Mike Greenwood, Britannia Club members, driving a van, supplied the riders periodically with warm drinks, food and lighting, accompanied the two riders.
Additional clothing was kept in the van, and this allowed the riders to rest for a few minutes while they were changing.

Late in the evening Peter Raabe had to call it a day having completed 195 miles (320 km).

Phil carried on and to the amazement of those following in the van he was able to raise his speed.

Approaching Ottawa the group anticipated being met and guided to the downtown area where they were supposed to deliver the letter.

Unfortunately the anticipated support was not there and after going off course twice they had to rouse the camera crew.

The final run-in was photographed and the letter handed over to complete the delivery. Needless to say they had beaten the normal postal service.

Such heroics are not often accomplished without some sacrifice.

Peter’s ride was one of 195 miles (320 km) and when he retired he was utterly exhausted.

For Phil the effects were even greater. Back in Toronto on the Tuesday he was taken to hospital on the Wednesday with severe frostbite.

The effects of the long ride had numbed his senses to the point where the danger of frostbite was hidden from him. Released from hospital after two weeks he was constantly in danger of loosing at least one of his toes.

Phil and Peter had accepted the challenge quite voluntarily and did not expect any compensation from the CBC except for the van expenses and their flights back to Toronto.

Phil was very lucky in that the surgeon that treated him in hospital had spent years in the far north and had much experience treating frostbite patients. Had he not been there to treat Phil there is a good possibility that Phil would have lost some toes.

The CBC did send a bunch of flowers.

2 thoughts on “Racing The Postman To Ottawa”