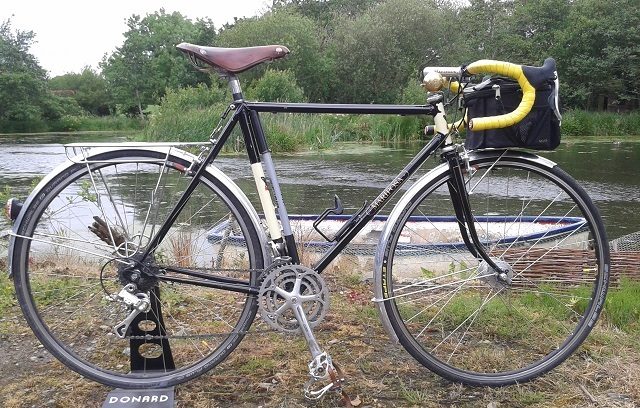 Bob Zeller, a Mariposa customer and friend for more than 40 years who currently lives in the United Kingdom, went to the Donard Bicycles, a custom bicycle workshop in Strangford Lough to have his mudguards replaced on his custom Mariposa, built 40 years ago.

Bob wanted an experienced and respected builder work on his Mariposa, as all of the fittings are custom made for the frame.

After completing the work, Donard asked Bob to write a feature for their website on his Mariposa and on custom bikes.

In Bob’s feature he discusses the merits of custom steel bicycles, highlighting fit and durability.

The joy of a handmade bike, built entirely to one’s own needs and measurements, is about as good as it gets for someone who loves cycling as much as I do.

I have three bikes. One is a Japanese-made Nishiki, that’s my winter bike, a Specialized Globe which is my go-to-the-shops bike and my handmade Mariposa which is both my road bike and my touring bike. It serves both purposes beautifully. So well, in fact, that I am still riding it almost forty years after it was built.

And that’s the real point of a custom made bike. There are many bicycles being sold these days fabricated from the finest materials and fitted with great components. But everything else is guess work by the manufacturer as it tries to create bikes for people of many different shapes and sizes and who will use those bikes for many different purposes. I like to think I am built much like Chris Froome (actually, I would prefer to look like Bernard Hinault, I suppose). But I’m not. I’m short and chunky with all the accompanying sizing complications. And the bike I want to ride is not a bike designed only for sportives and club thrashes about the countryside, even though I have done many of both.

In fact, what I wanted was a bike that: