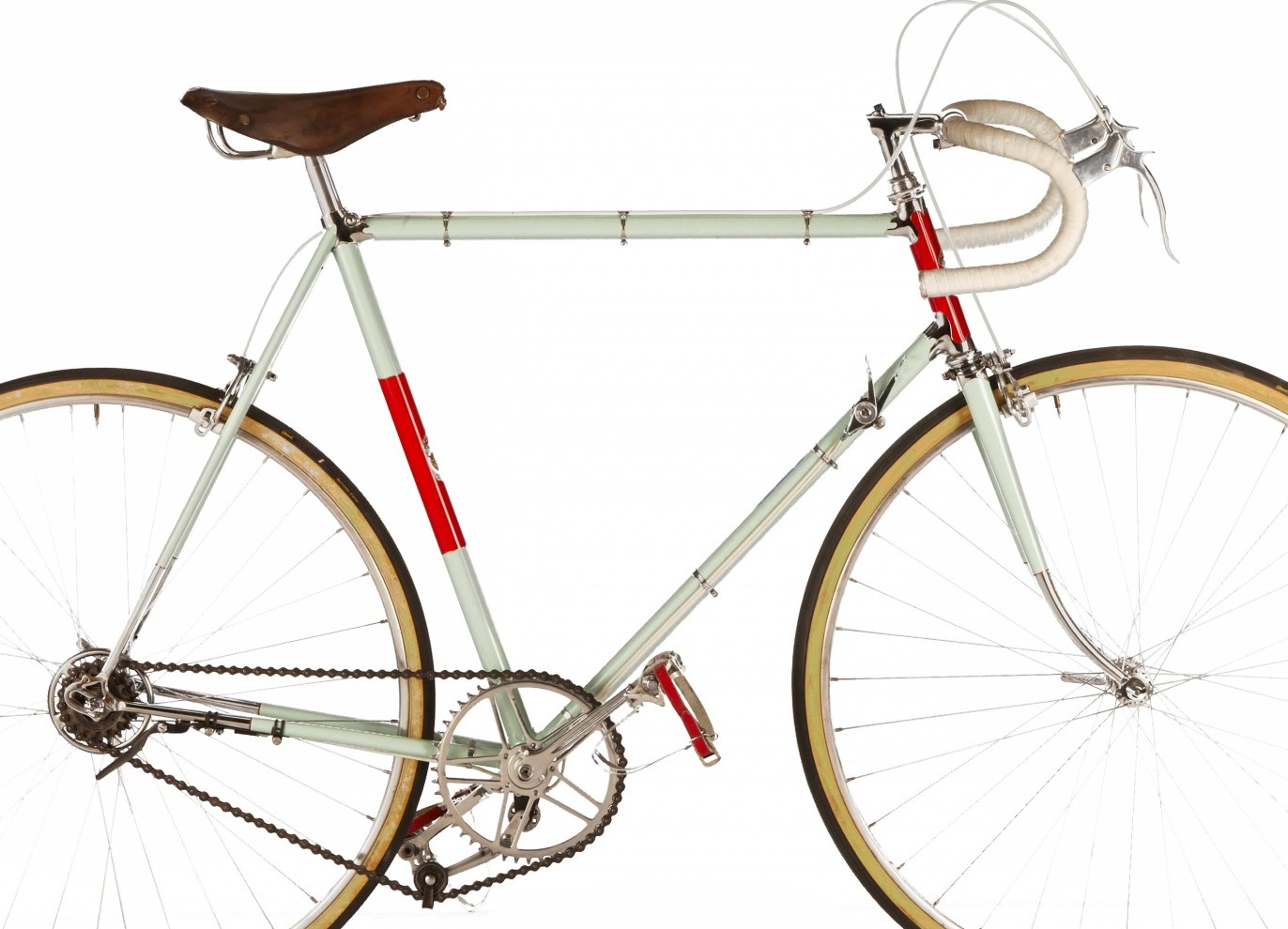 Following the Italian Gino Bartali’s second victory in the Tour de France in 1948, he decided that for the 1949 Tour he would ride a bike fitted with a derailleur which did not require back pedaling to change or require twisting around in the saddle to reach shift levers mounted on the seat-stays. All the French teams in the Tour had derailleurs that required no back-pedaling and had levers mounted on the bike’s down tube. 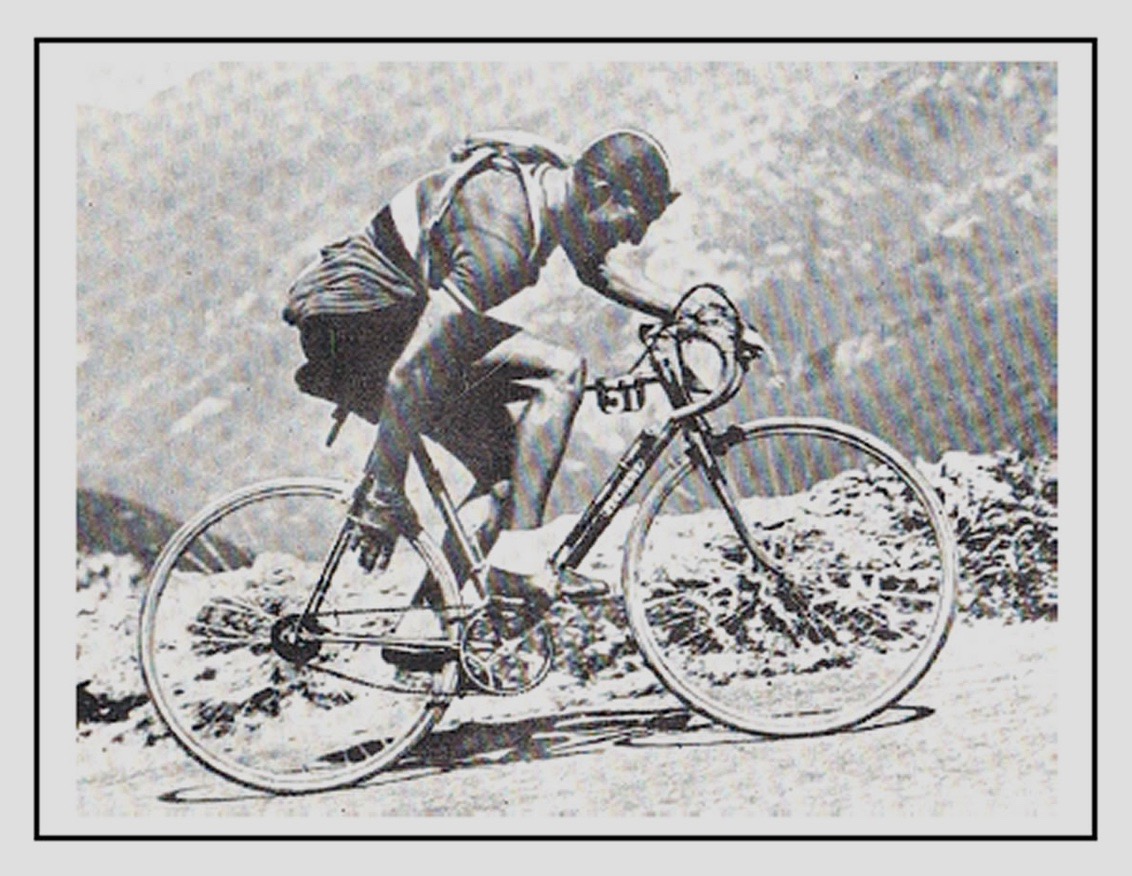 He approached the Nieddo brothers who owned the Vittoria company, makers of the infamous Margherita derailleur. It was decided to produce a derailleur similar to the French Super Champion Osgear. They named the new mechanism the Cervino. In some respects it was similar to the Margherita with the chain tension arm mounted under the bottom bracket but it was cable operated by a lever on the down tube. 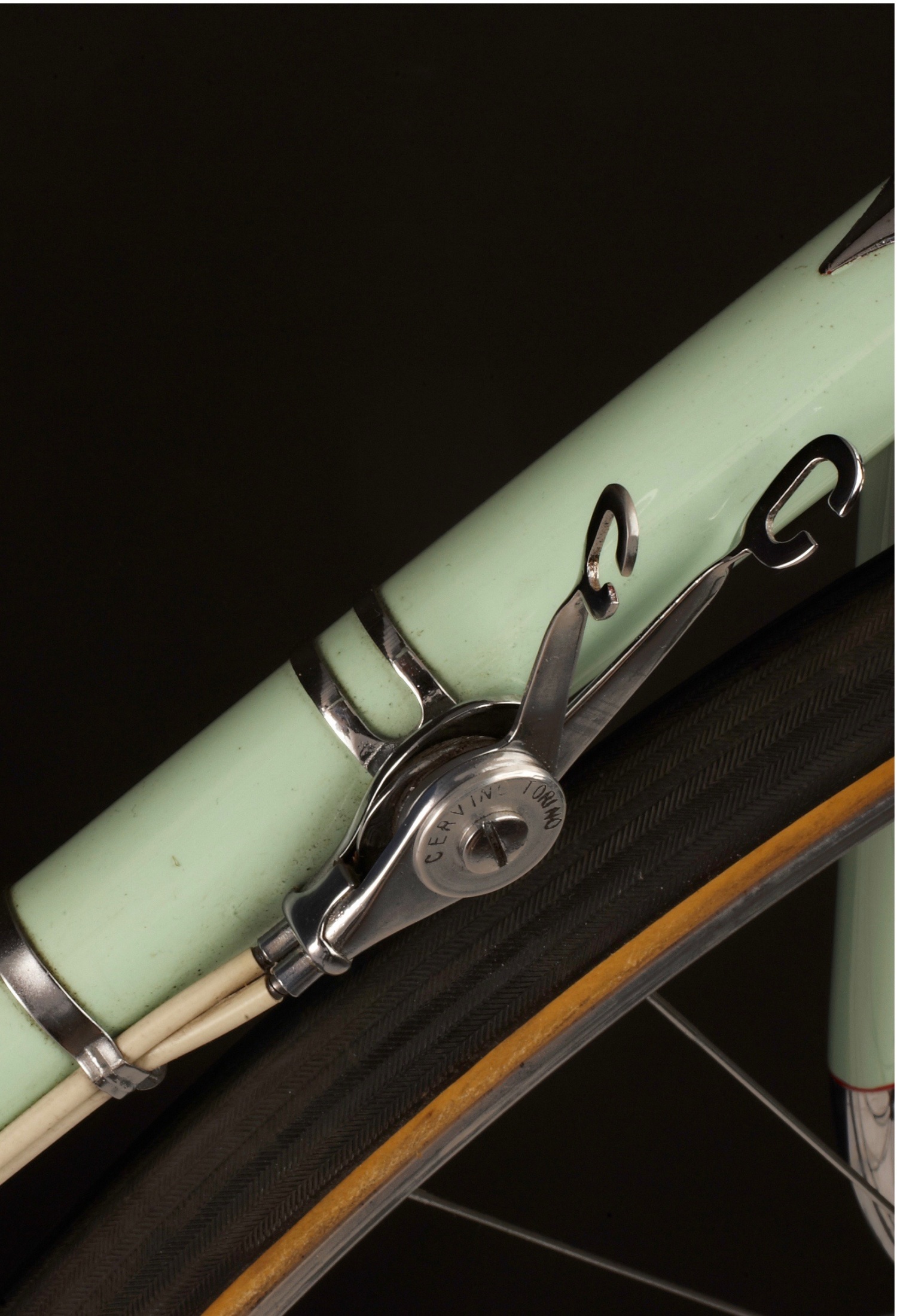 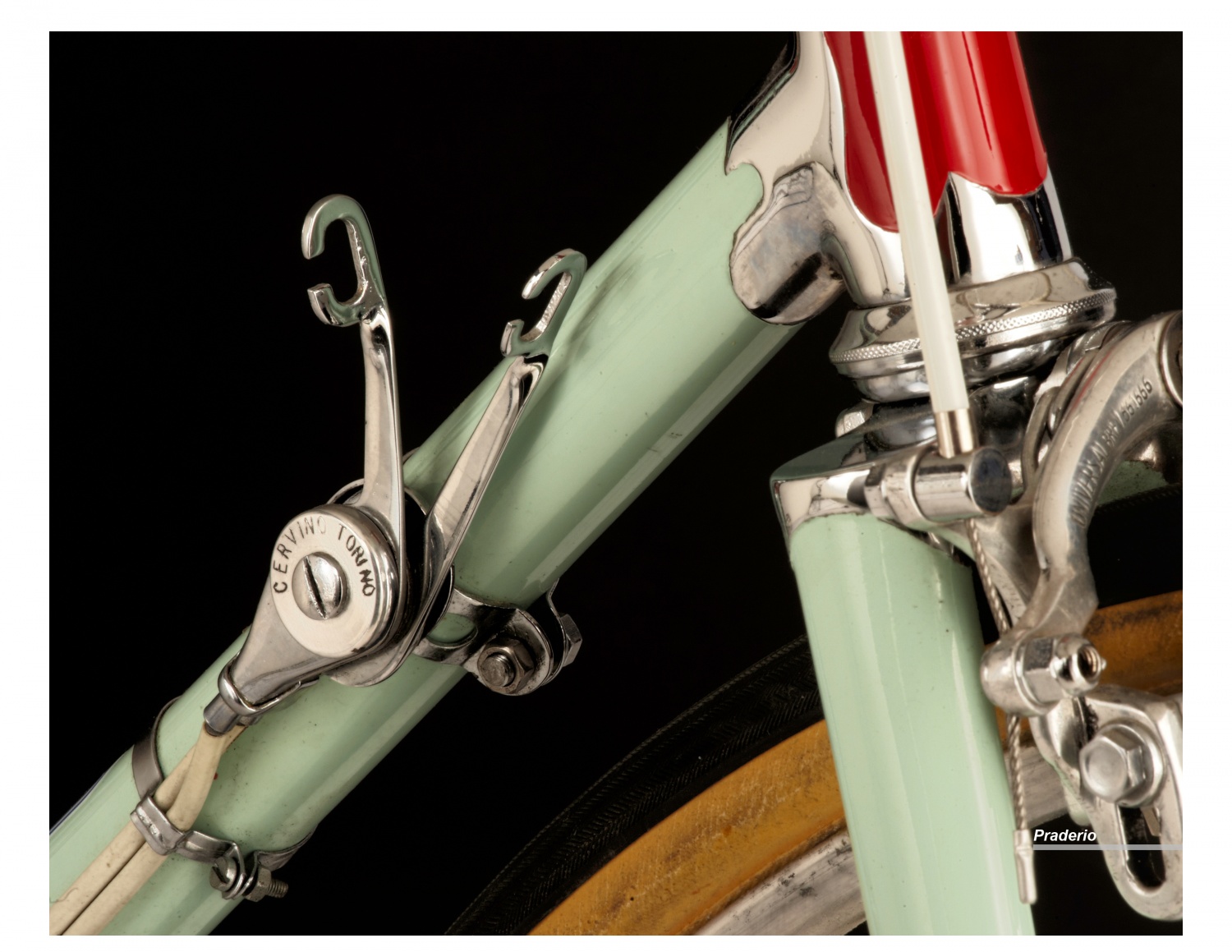 Like the Super Champion it had two cables, one to change gear and the other to adjust the chain tension. This was a feature of many of the derailleurs of this period. Many of the roads were cobbled and chains often derailed when the bike was bouncing over the stones. Tightening the chain when on bumpy roads helped to keep it on the single chain-wheel. Reducing the chain tension when riding on smooth roads lessened the friction on the chain for a smoother, more efficient transmission. The Cervino is the only derailleur I have seen that has a rubber tire on the tension pulley. It makes for a quiet transmission. 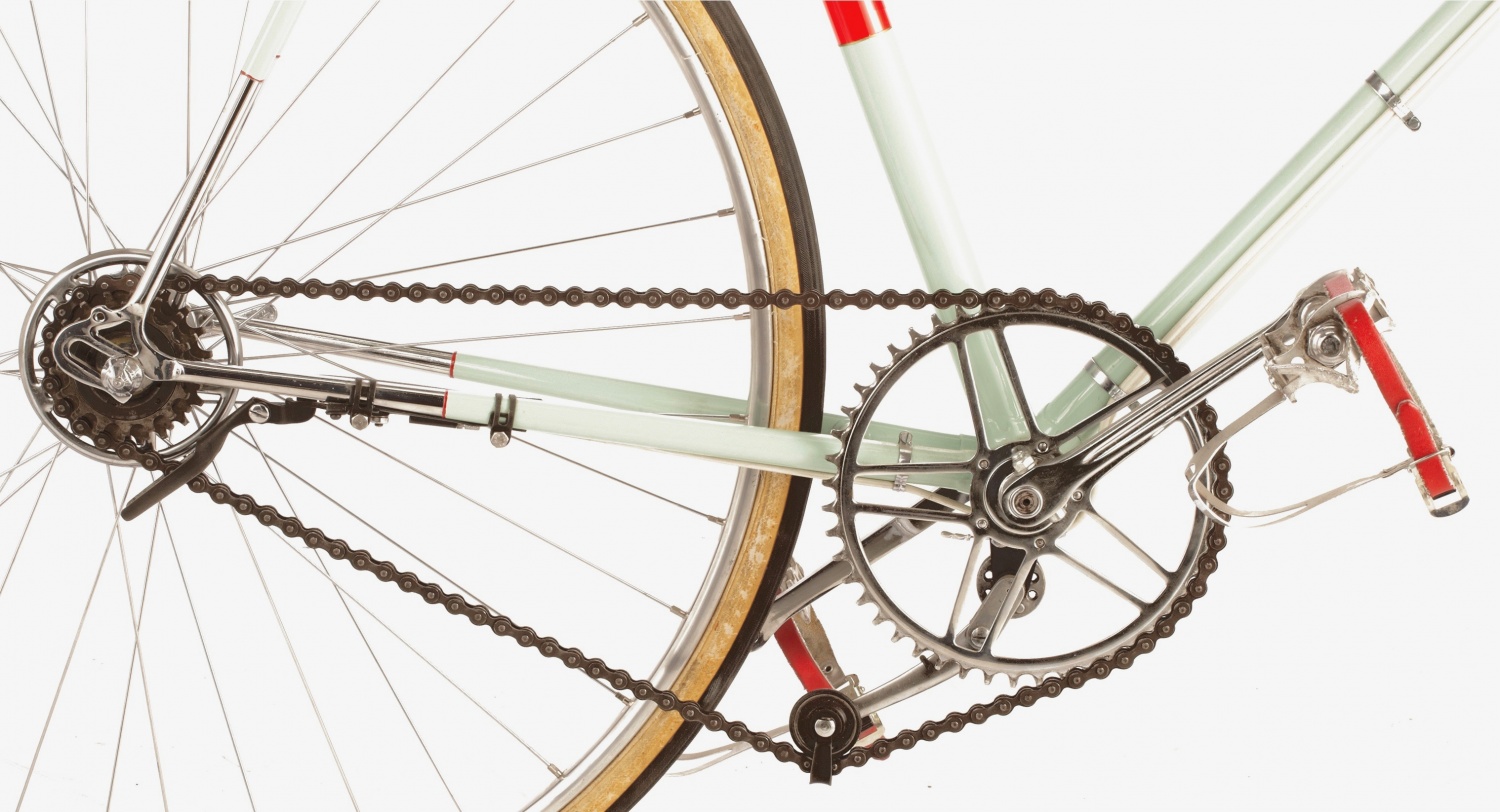 Double chain-wheels were just coming into use at this time. With a front derailleur fitted there was less chance of the chain coming off. It was unfortunate that Bartali and the Nieddu brothers chose to mount the tension arm under the bottom bracket, This made it very difficult to get a double chain-wheel to work efficiently. It was a nail in the Cervino’s coffin right from the start.

Bartali used a Cervino derailleur in the 1949 Tour but he was beaten into second place by his compatriot and arch rival Fausto Coppi. Coppi rode his Bianchi fitted with a French designed but Italian made Simplex also with a single chain-wheel. 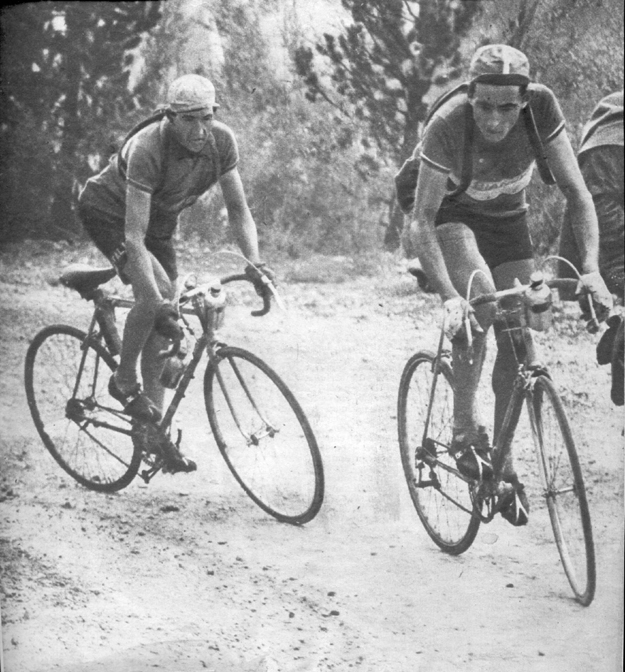 Coppi leads Bartali in the 1949 Tour de France. Bartali with a Cervino derailleur and Coppi with a Simplex

The Cervino derailleur was in production for a very short time. In 1951 Campagnolo introduced their Gran Sport model that revolutionized the derailleur market. The Cervino and Osgear disappeared and although the French companies Simplex and Huret survived they both had to bring out models similar to Campagnolo’s Gran Sport.

The Cervino, having been in production for such a short period is now highly desirable by collectors. I was fortunate enough to be able to find this Praderio bike fitted with the Cervino in 2005. It was in very poor condition with some of its tubes rusted through. I replaced the rusted tubes and restored the frame and all the components. 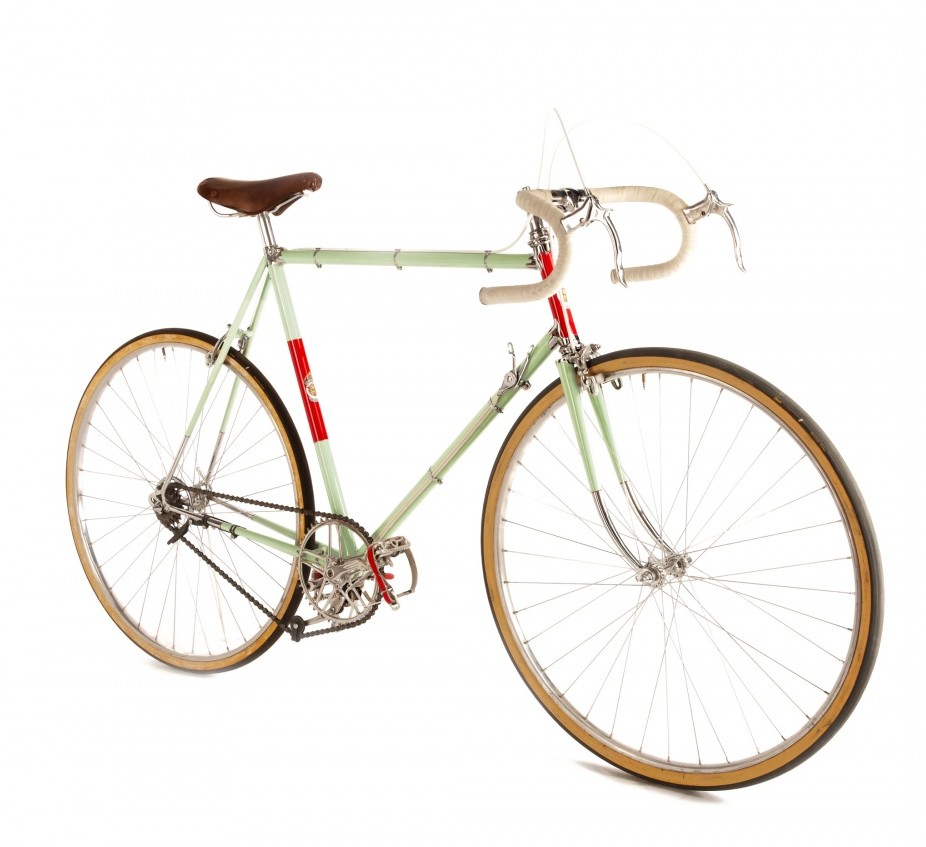 It is now one of the bikes I value most in my collection. It won “Best Restored Bike” at the Cirque du Cyclisme.

At Mariposa Bicycles/Bicycle Specialties we have good knowledge of vintage bikes and equipment and can restore old bikes to their original condition ready for any of the multitude of retro bike events available today or just to hang on your living room wall. For more information, contact us at [email protected]

3 thoughts on “Bartali, Coppi & Derailleurs in the 1949 Tour de France”