One Man And His Mariposa | Mariposa Bicycles Skip to content

One Man And His Mariposa 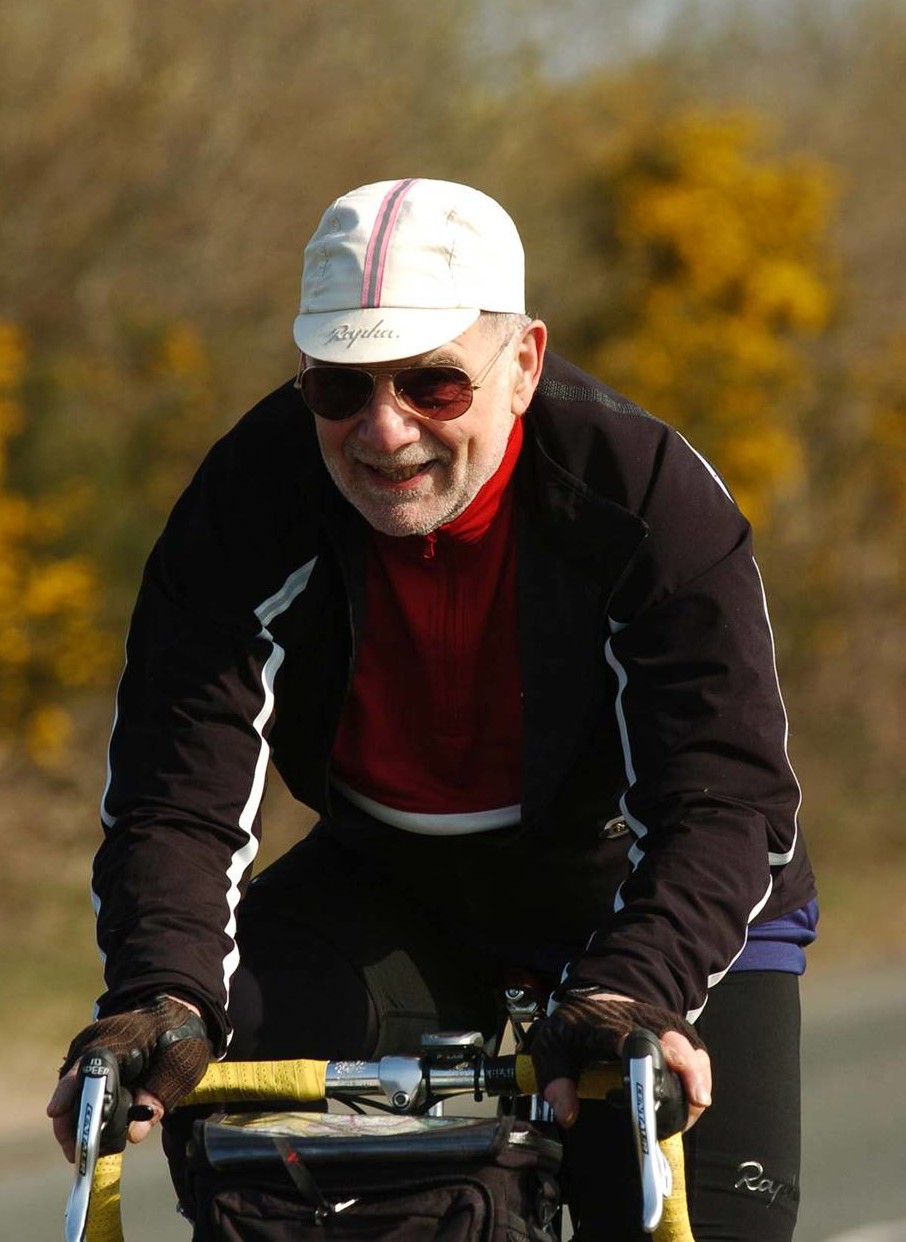 I got my first view of my new Mariposa while watching Mike Barry build it up in the front room of his late Mum’s house in Wimbledon, England in 1978. Mike had made the frame earlier in Toronto. As there had been problems with the painter they had been using he thought it would be a good idea to have it painted by Holdsworth, in England. Then, we could fly to London where he would collect the frame when it was ready and he could then complete the bike in Wimbledon with the parts that he had brought from Toronto. After that, the two of us could do a weeklong tour of southern England.

Holdsworth’s paint job was excellent, so it’s not hard to imagine how happy I was as I watched Mike bringing my bike to life in his Mum’s living room.

And I am still as happy 39 years (and many paint jobs) later. My bike has been many different colours since then, but it is still every bit as exciting to ride as it was when I first wheeled it out of Mrs. Barry’s front door to the waiting road. Mike had suggested I give it a short ride just to check everything out but my short ride turned out to be a lot longer as I wheeled my way joyously around the block many times.

There was more excitement to come as we planned our tour. Mike suggested an informal routing that would offer interesting riding every day. I was delighted to agree, only to remember later on that Mike had been a successful road and cyclocross racer. Would I be able to keep up with him? I wondered. 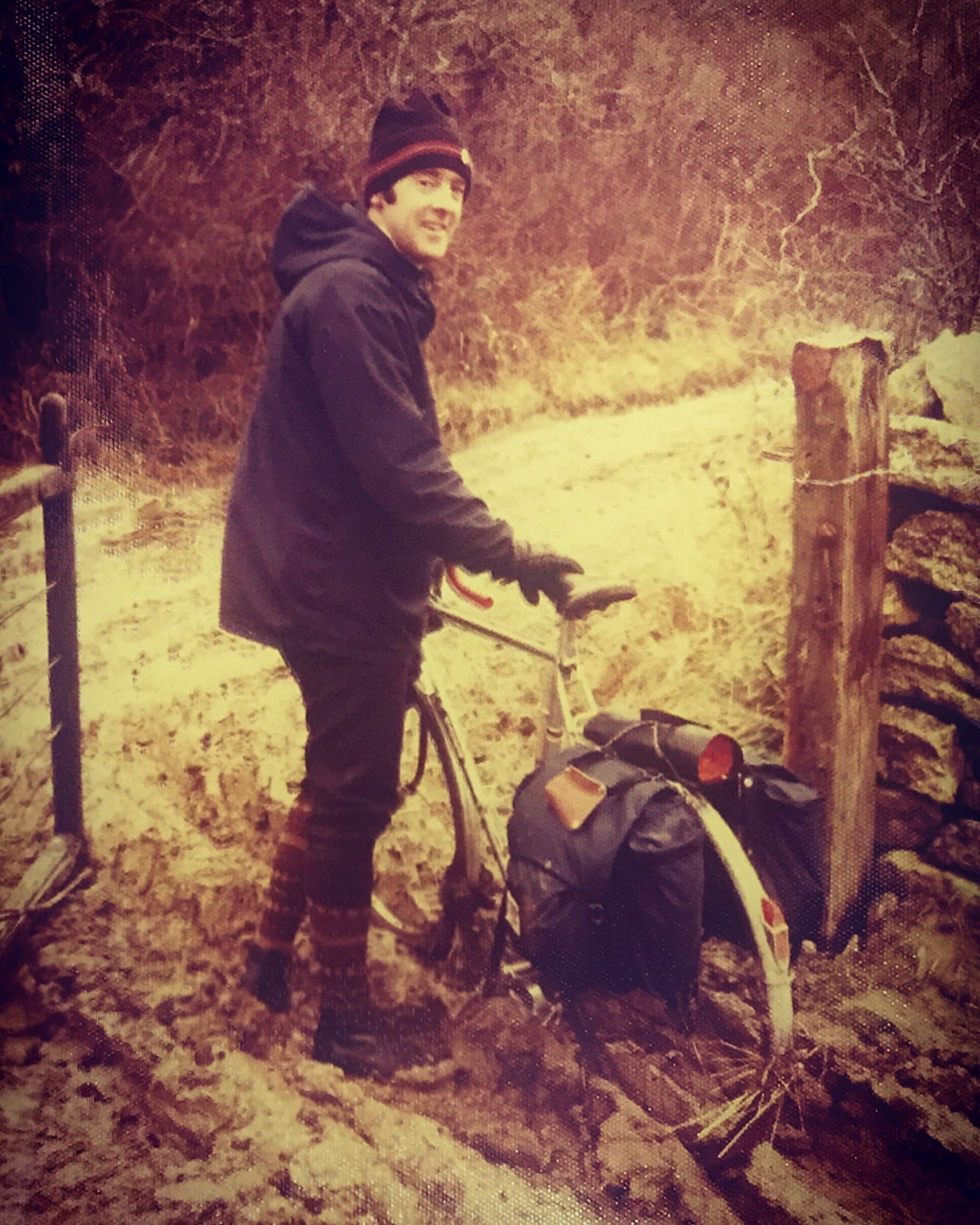 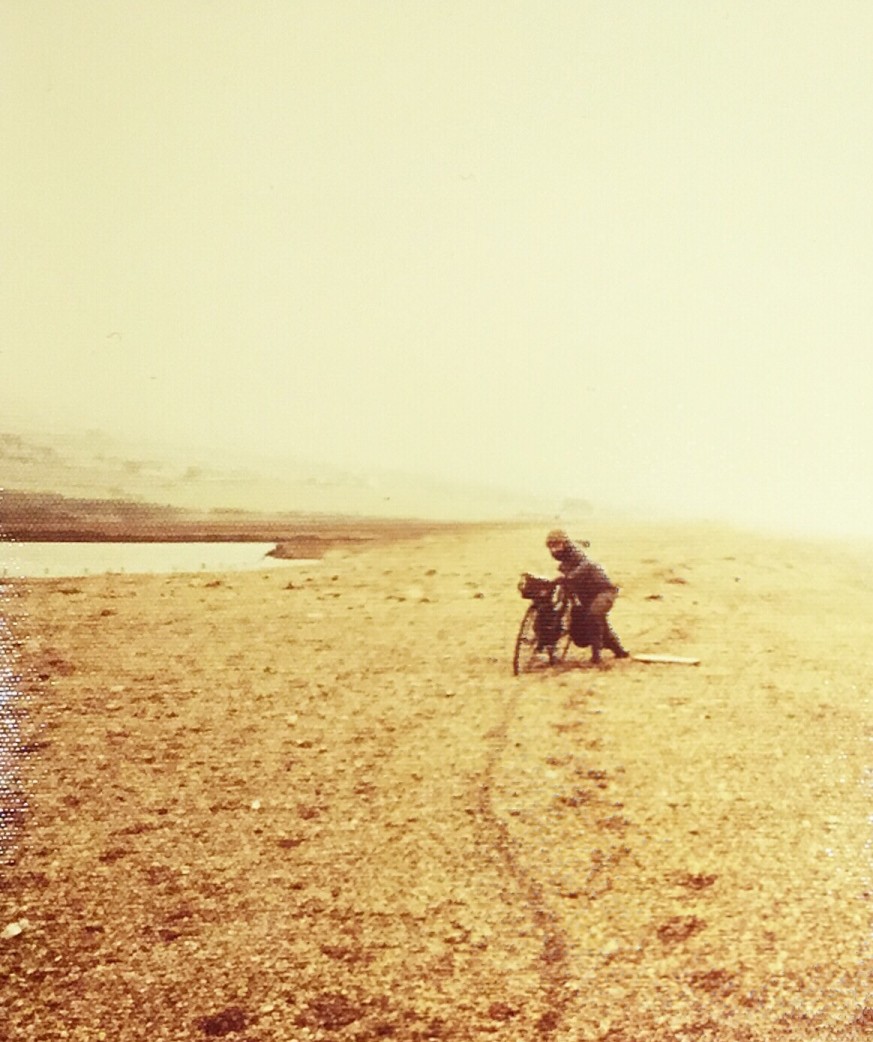 The weather was seldom great. On day one we had a snowstorm. And it got worse after that. Another day, our route to Lyme Regis involved plenty of rough stuff as we worked our way along a shale beach. When we got to our hotel that evening, we were so covered in muck and mud and so wet from the rain that the owner wasn’t going to let us in. Still, looking back, it was one of the best days I have ever spent on a bike. 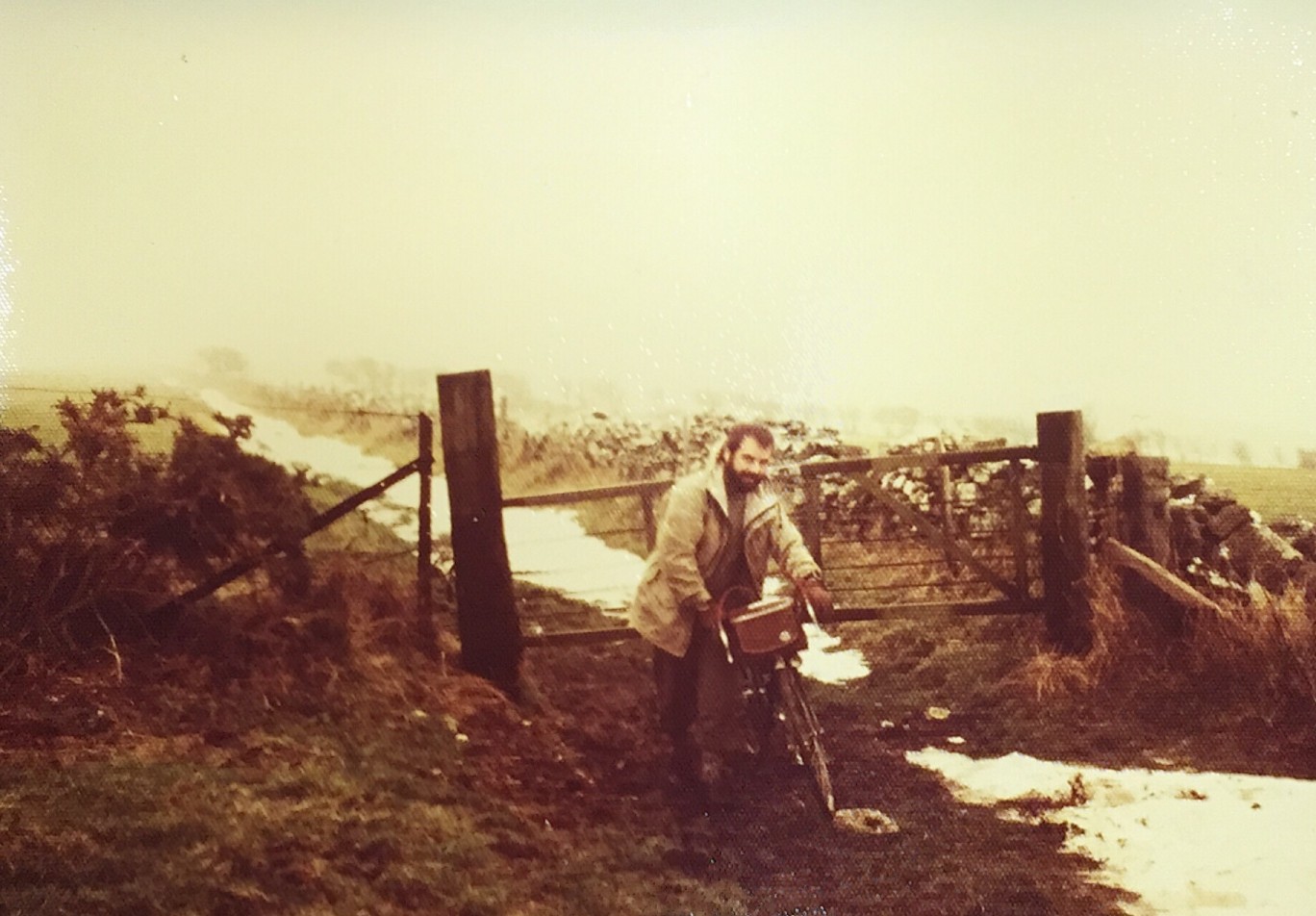 It was actually Mike’s business partner Mike Brown that I met first when I walked into Bicyclesport, their store in Toronto, for the first time. A few weeks earlier, I had just bought a Mercier in Montreal with the idea that getting in some miles might see a return to a modicum of fitness. So keen had I been at getting in the miles, I thought that the Mercier might now need a bit of service. It did, but more importantly, I needed some advice – advice that I didn’t know I needed. “You’ve got a good bike here,” said Mike Brown. “But you need mudguards and lights. If you’re going to ride a bike seriously, you will be riding in the rain and you’ll be riding at night. It doesn’t make sense to not have them…if you really are serious about cycling.”

That was just the first bit of worthwhile advice. I never stopped asking questions – to both of the Mikes. Where they got their patience with me, I’ll never know. Sometimes they had to explain things using words of no more than two syllables, but they always were happy to give advice. And I was always grateful for it.

I was soon anxious to move up to a better bike. I had already done a bit of touring on the Mercier, including a spectacular ride around New Hampshire that featured a tough ascent of Mount Washington. What an entré that was to touring and the touring community! I did it with a group of people put together every year by a great guy I had met at the Great Canadian Bicycle Rally organized by Henriette Burke and Jean Ross and others in Woodstock, Ontario, The New Hampshire cyclists were typical of so many touring cyclists that I have met over the years – always prepared to welcome a stranger.

So with just a bit of freshly acquired knowledge, but a lot of advice from the two Mikes, I bought an Apollo from them. Actually, I bought it because they recommended it as a bike that had a reasonably relaxed frame geometry that would be able to manage a ‘bar bag and panniers. For me, it was a huge but proud step up in the touring world. So to get things started in the right way, I set out on another tour, this time the scenic route to Montréal and Quebec’s Eastern Townships. I enjoyed this ride so much that over the years I did it three more times.

But, even while buying the Apollo, I often heard about the Mariposas that had been occasionally produced in the two Mikes’ shop. I had never seen one, but when people spoke of them, it was almost in hushed tones. So I started to bug the staff, so much so in fact, that one, Mike Miller I think it was, who was most likely sick of me constantly badgering him about the Mariposas, said I would need to speak to Mike Barry.

I did and was devastated to hear that Mariposas were not being built at that time, and it was possible they would never again be built, so busy was the shop with its regular customers. But I kept up the gentle campaign. “If you were to start building Mariposas again, would you consider building one for me? “Perhaps,” was the gentle answer.

I scurried on asking the question whenever there was an opportunity. Always the answer was the same – “perhaps.” But one day, Mike Barry’s answer was different – “yes, I’ll do it.” I was over the moon!

And so began the planning. Mike and I had long conversations about what I wanted to do with the new bike. It was simple to describe to him, but harder for him to execute: ride the Randonneur events that the two Mikes and others were just starting to organize and, as well, tour extensively. One bike with two purposes. Somehow, Mike brought both of these together.

My bike is excellent for Randonneur events although these days, the focus is more on touring. Retirement means I can usually manage two tours in France every year. The frame’s geometry means it is comfortable over any distance I chose to travel. And even when loaded with ‘bar bag and panniers, I can still cope with tall hills and long distance.

It is permanently equipped with brilliant front and rear Mariposa carriers that provide secure fastening for the luggage, and it has brakes that can bring the bike, loaded or otherwise, to a safe and secure stop from any speed. Being built to qualify for official Randonneur events, it has a complete lighting system although a Schmidt hub generator has replaced the original Sanyo generator. In short, the bike is perfect for my needs.

Mind you, some needs change with time. About eight years ago, my worsening hearing meant that often I couldn’t hear the chain clattering if I wasn’t quite in gear. Mike dealt with that by swapping the original Simplex LJ derailleur system for Campag Centaur components. Index shifting means I am now never just half in gear. Another time, when the bike was in for service, Mike changed the ‘bars to ones a bit wider as he thought they would be a bit more suitable because my position on the bike has changed as I got older. When I needed a new pedal, Mike had a pair of TA ones for me and he built new wheels as well.

The point is, though, if you have a bike that has a first class design, is made of first class tubing and built to a first class standard, then you have the right base and your bike can be almost human like, changing and adapting to new needs. My Mariposa was constructed of Reynolds 531 tubing when 531 tubing was state of the art. Incidentally, It’s still bloody good by today’s standards. The weight of a frame made with today’s very best steel tubing is a bit less than mine – mind you, the weight saving would be less than the weight of a full water bottle I would imagine – but what real difference can that possibly make for most cyclists? For me, the original design requirement was that the bike should be able to be ridden comfortably and safely over long distances while often carrying panniers through all kinds of unpredictable weather. It was brilliantly met in 1978 and it is still being met today.

Truth is, while some cyclists spend their time arguing about the saving of a gram or two of their frame weight, or which saddle has the lightest carbon fiber rails, I’ll be moseying my way down a small French road, without a worry about whether or not I have the very latest bike and equipment. Instead, I’ll have a big smile on my face as I thank my lucky stars that on that day in 1978, Mike Barry said ‘Yes, I’ll do it.

About the author: Bob Zeller is a former Globe and Mail journalist and Winning Magazine editor who covered the Tour de France in the 1980s.