The Colourful And Enduring Life Of A Bicycle 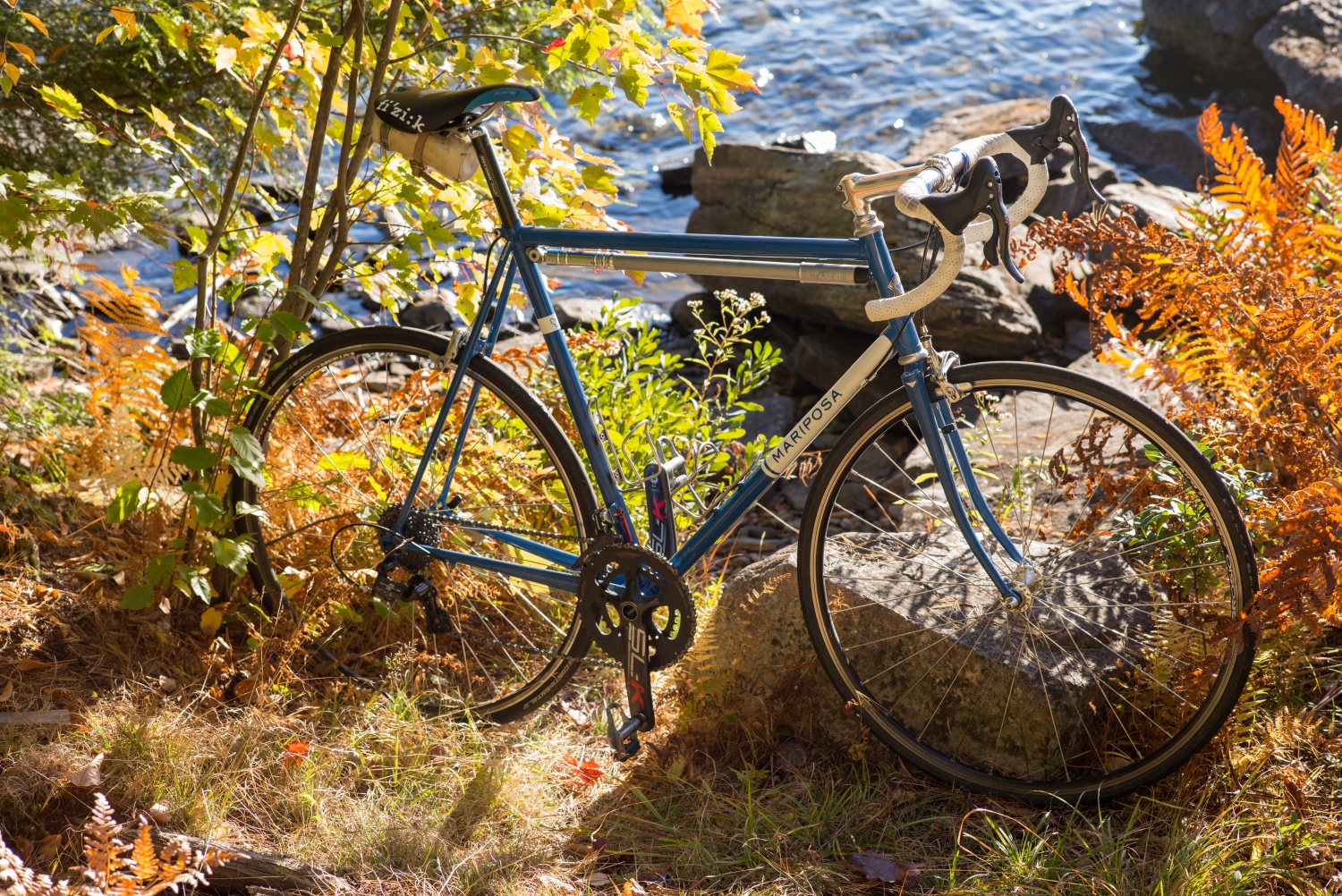 A bicycle remains one of the simplest and most efficient forms of human transportation. Its design is so good it is hard to improve upon. Bits and pieces have evolved but the basic design has remained the same for the last century. The frame geometry, the size of the wheels and the way the cyclist sits on the bicycle all contribute to how well the bicycle moves. A well designed bike will feel like an extension of the body—the rider and machine will become one, moving with fluidity over incredible distances. A good, properly fitting bike, is hard to retire even when it no longer has the latest transmission, wheels or brakes.

When a vintage Mariposa, built a decade or so ago, comes in for a restoration or a simple tune up, it feels special, especially when we know the bike has been ridden consistently for years. Over time, those bikes develop a storyline that becomes part of their patina, etched with the kilometres. One Toronto based customer, whose Mariposa was built twenty years ago, logs close to 20,000 kilometres each year while he puts roughly 800 on his car. His bicycle has hundreds of thousands of kilometres while his car, of the same vintage, has less than half that. A lawyer who works downtown, he rides it all over the city during the weekdays, and then, takes part in long randonneur events on the weekends. Perhaps, he will ride it for another twenty years.

We now live in an increasingly materialistic society where objects are disposed of instead of fixed. It frustrates my father, who is part of a generation that repaired and used items until they were worn out, that he can no longer fix the dishwasher, or the toaster, or the vacuum cleaner, like he once did, as the parts are no longer available. Products no longer come with wiring and schematic parts diagrams. Appliance repair shops that were once in every neighbourhood, are increasingly rare. The hope and expectation is that we will put our broken items out on the curb, and buy a new ones. Of course, we all know this is wrong, but find it hard to avoid as few new products are built without planned obsolescence. So, it is refreshing to repair an old bike, to keep it going, to keep it out of the landfill, and to build new frames that can be used for decades and passed on.

Over the years, I’ve ridden dozens of bicycles, from steel frames that my father built in his shop, to glued aluminum frames made in Italy, to custom welded titanium bikes from the USA, to welded aluminum and glued carbon frames made in Taiwan and the USA. I held on to a few of them, but many went on to friends while others went back to the professional teams that sponsored me to race. Until I was paid to ride a branded bike, I, naturally, rode a Mariposa. As I grew like a weed through my teen years, my father kept pace with my growth, building new frames every year or two, and then, when I started racing on the track, he built several specialized bikes (a points race bike, a low profile and a road bike) for each discipline.

The ten or so Mariposas I rode in the 80’s and 90’s are all still being used. The first, that my father built when I was 6, is ridden in central Toronto by a young boy. My nine year old son rides the bike I rode when I was his age. My mother rides the bike I rode when I was twelve. Matt Mansell, a former Bicyclesport Mariposa team rider and employee at the shop, is riding the frame I used when I was thirteen. A customer, who brought one of the race bikes I rode as a teenager in to the workshop last year for a tune up. Another Mariposa I rode the last two seasons before I turned professional with Saturn in 1998, is being ridden in Maryland. And, our family friend, Ian Austen, is currently riding a frame my father built for me in 1994. Most of the frames have been repainted, or at least touched up, and on most, the parts have been updated, but they all still get a lot of use. 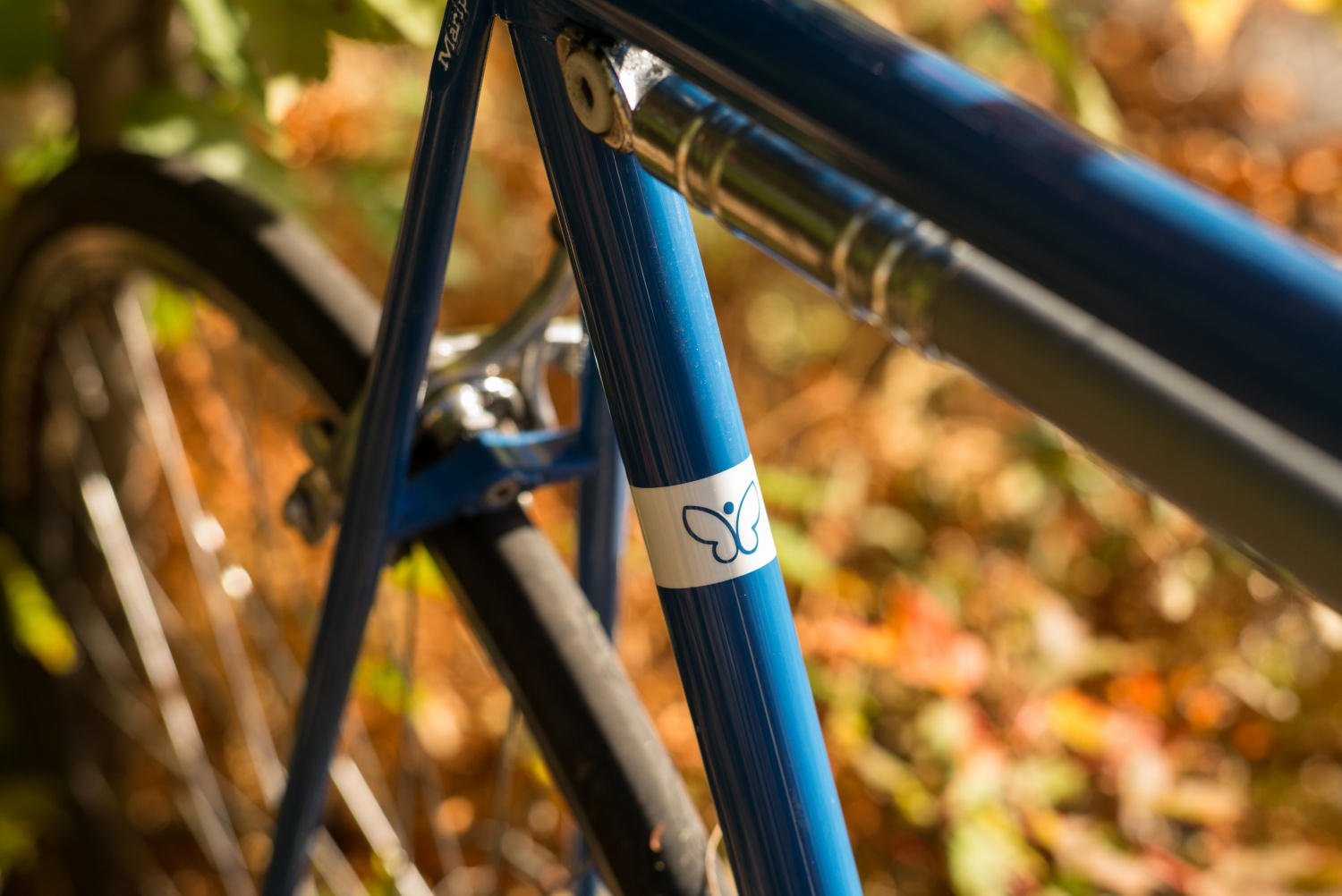 Ian brought his bike in to the shop earlier this year to have a few dents filled and the frame repainted. Seeing the bike, brought back a slew of memories. In ’94 and ’95 I rode that bike hard and took it all over the world. It was made with Columbus EL, a lightweight oversize tubing. Originally, as I was riding for a US semi-pro team from Ohio that was sponsored by Bridgestone bicycles, the frame was painted with their colours with the Bridgestone decals—I had nothing against Bridgestone, a Japanese company who made good steel frames, but I wanted to ride a bike that my father built that I knew fit me and handled well. 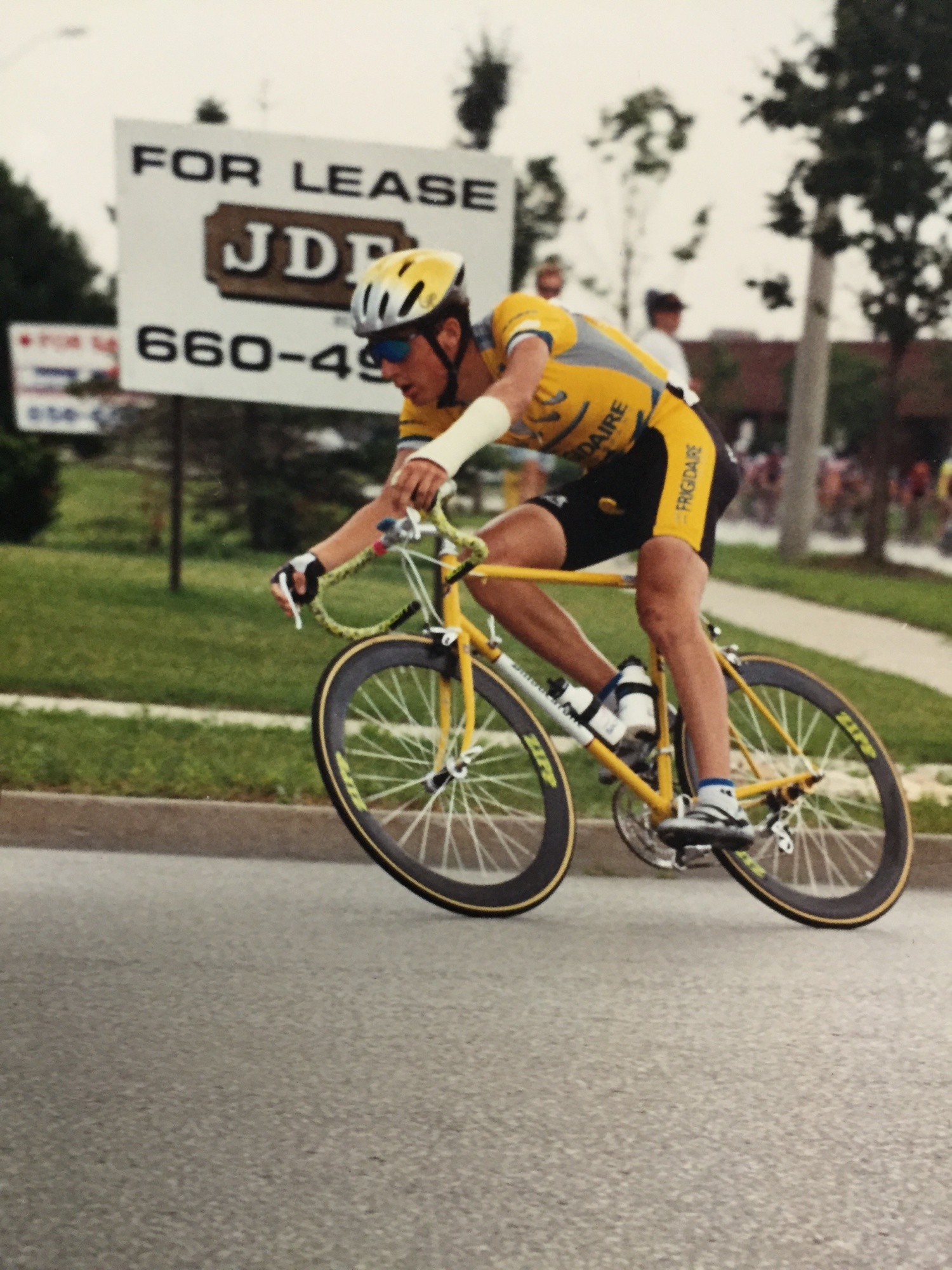 Michael Barry racing on his Mariposa in 1994 with Bridgestone decals

The following season I changed teams and it was painted red and white with a Mariposa decal. The bicycle carried me to the Commonwealth Games in Victoria, through the Tour of Avenir, a ten day Tour de France for riders under 25, and to dozens of victories. On that bike, I realized I could make a living racing. 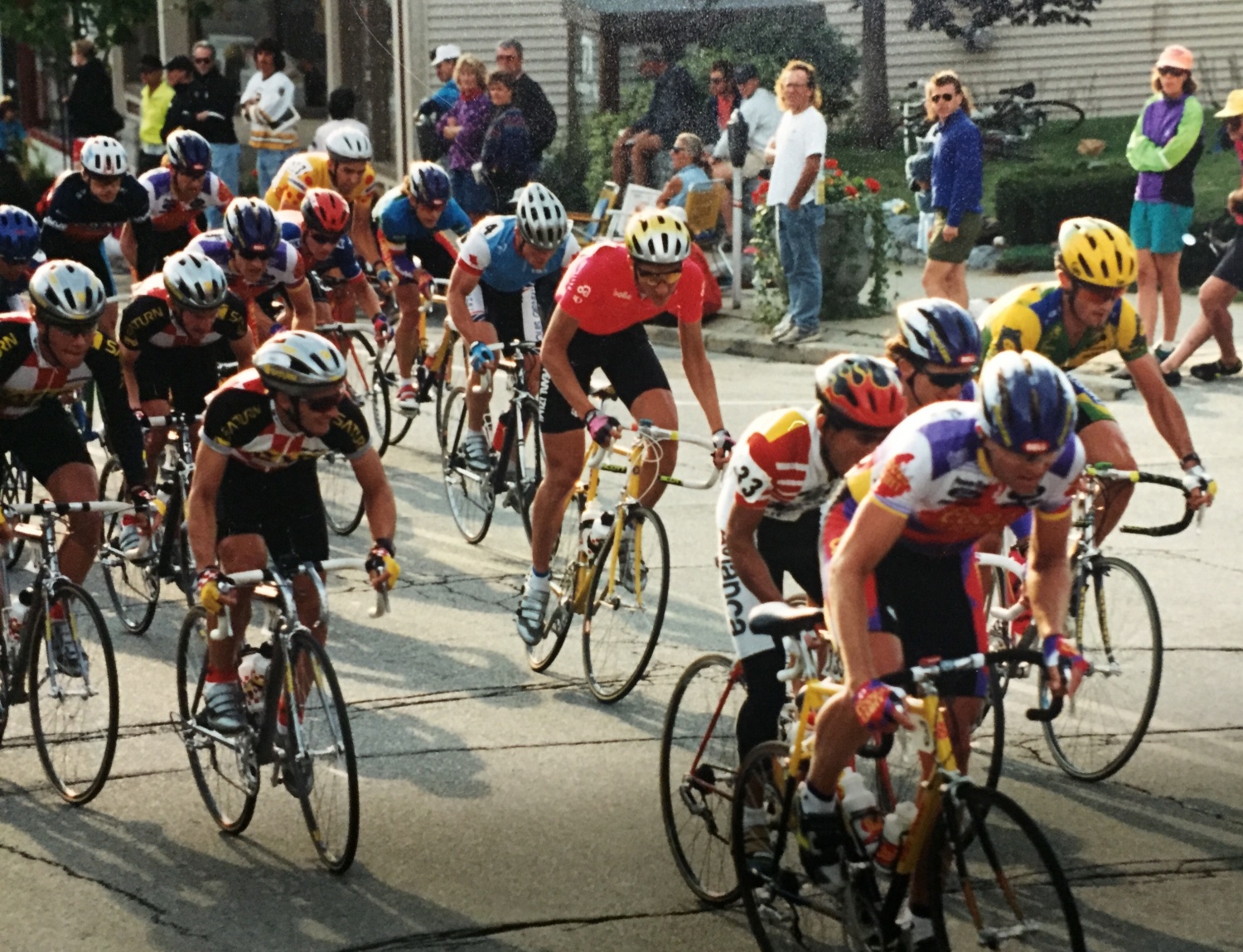 While I raced in France in 1996, the team was sponsored by Specialized so I wasn’t allowed to ride the bike. It was used by a local junior, Brian Turner, for a season or two. Scratched badly from several seasons of hard racing and banged up from a few good crashes, it was repainted in blue and silver. Ian has ridden it since then. Of all the bikes I rode, this was one of my favourites. When I sat on that bike, and rode all day, dug in deep on a climb, tucked low in the crosswind, or as I sprinted out of a corner towards the line in a criterium, if felt like a seamless extension of my body. The frame handled beautifully and was lightweight for a steel bike of the period. In 2016, Ian was still racing on that bike.

I try not to become attached to many of my bikes, or for that matter, material objects, but a good bike, that fits well, is hard to let go. Seeing my son ride my old bike, after dozens of other kids have ridden it through the years, gives me joy. I rode all those bikes a lot and they became scratched and dented from the journeys they took me on. From childhood to adulthood they helped mark my life and, I hope, they will continue to be ridden often for many more years. A good bike should develop a great storyline. 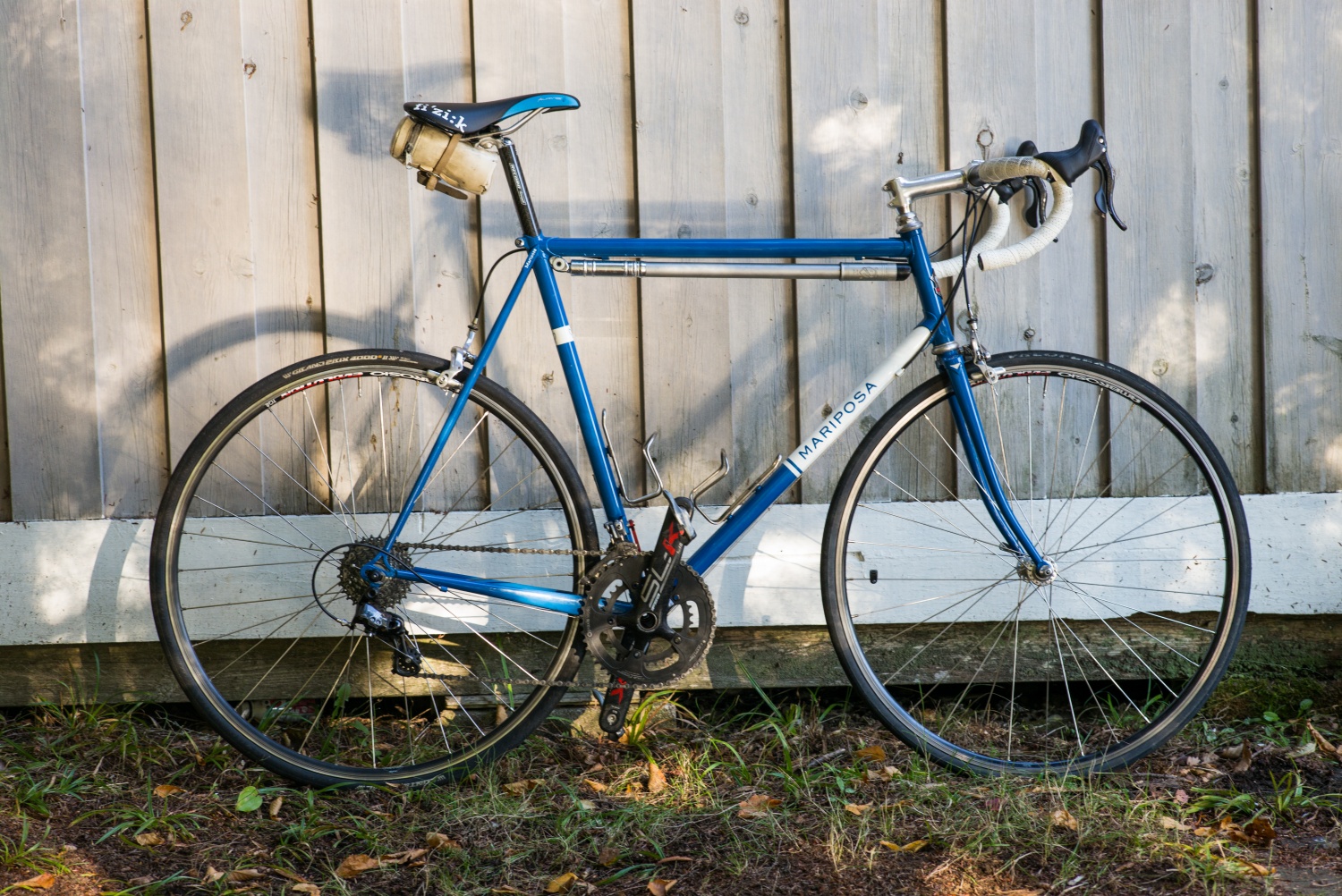 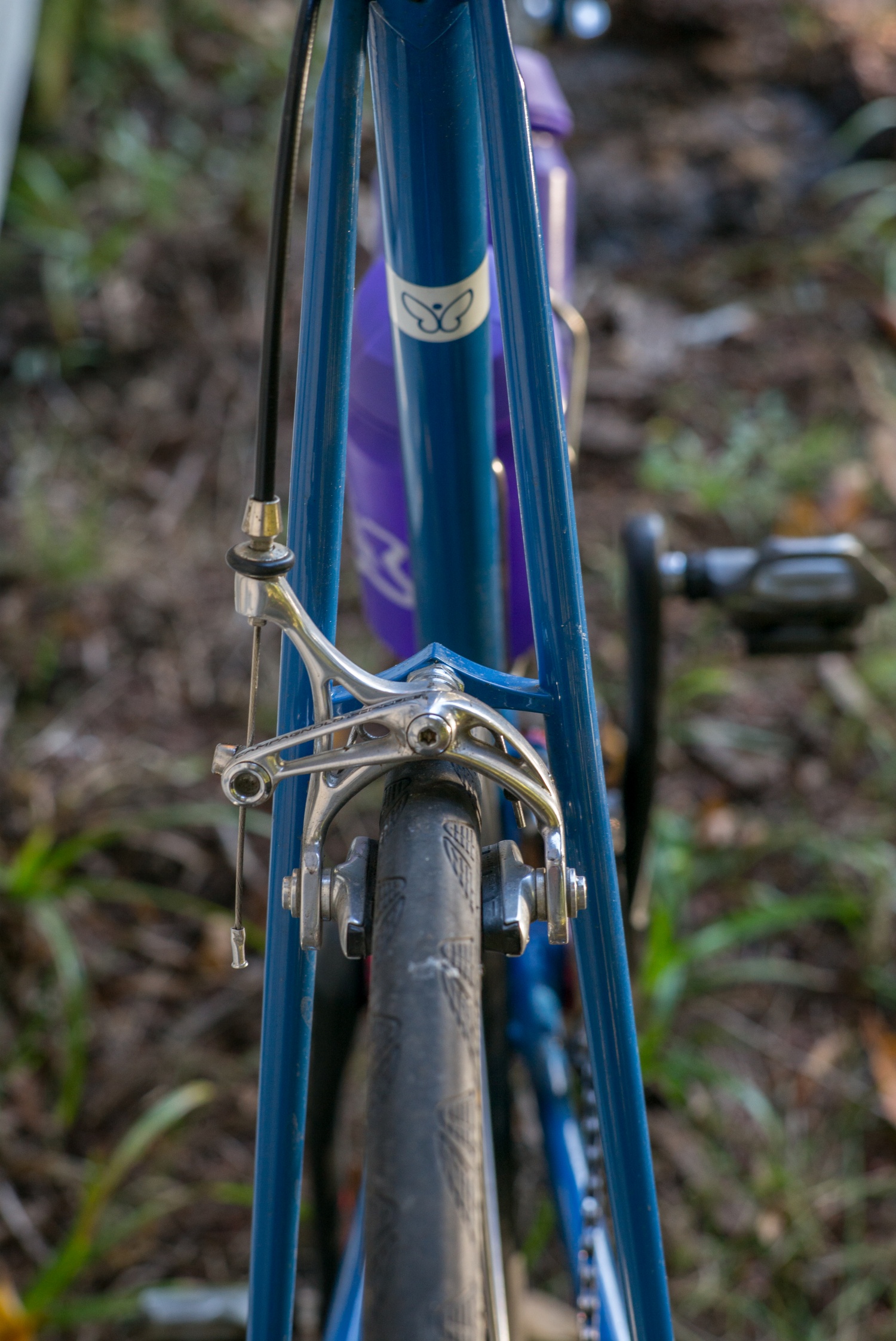 When I came to own Michael’s EL frame is something I no longer remember. But I distinctly recall Mike pulling it down from a dusty rafter. The blue paint job, which was jobbed out at a time when Mariposa lacked a paint booth, was a bit indifferent. But the frame itself was something of wonder: light, stiff and beautiful in the way that only a frame in which everything is correct can be. Its connection to Michael further enhanced its appeal.

Eventually I succumbed to peer pressure and went through a series of non-steel frames. It was a series because three of them broke and were replaced under warranty. Meanwhile, the Mariposa gained clip-on bars, a bigger chain ring and a rear disc wheel and a few other things to become the bike I used at the Thursday night time trial series in Ottawa where I live.

When Michael returned to Canada, I thought that he should reclaim the frame as I knew it was one of his favorites. But he gracefully declined saying that he wanted to build his own.

I finally came to my senses and the EL Mariposa again became my primary road bike this year after getting new paint and some minor repairs. I won’t preach about steel frames other than to say that I don’t know why I went down that other path.

Today the frame has some touches which probably wouldn’t be approved of by Mike. The crankset and seatpost are both carbon mainly because I got them at good prices. I’m using oversized handlebars and an A-head style stem with a quill adapter. Their improved stiffness improves cornering and descending. At least I think so but, again, I’m not sure that Mike agrees.

After all this time, it’s still a privilege to ride a bike with such history, and a bike which should continue to serve me for many years to come. 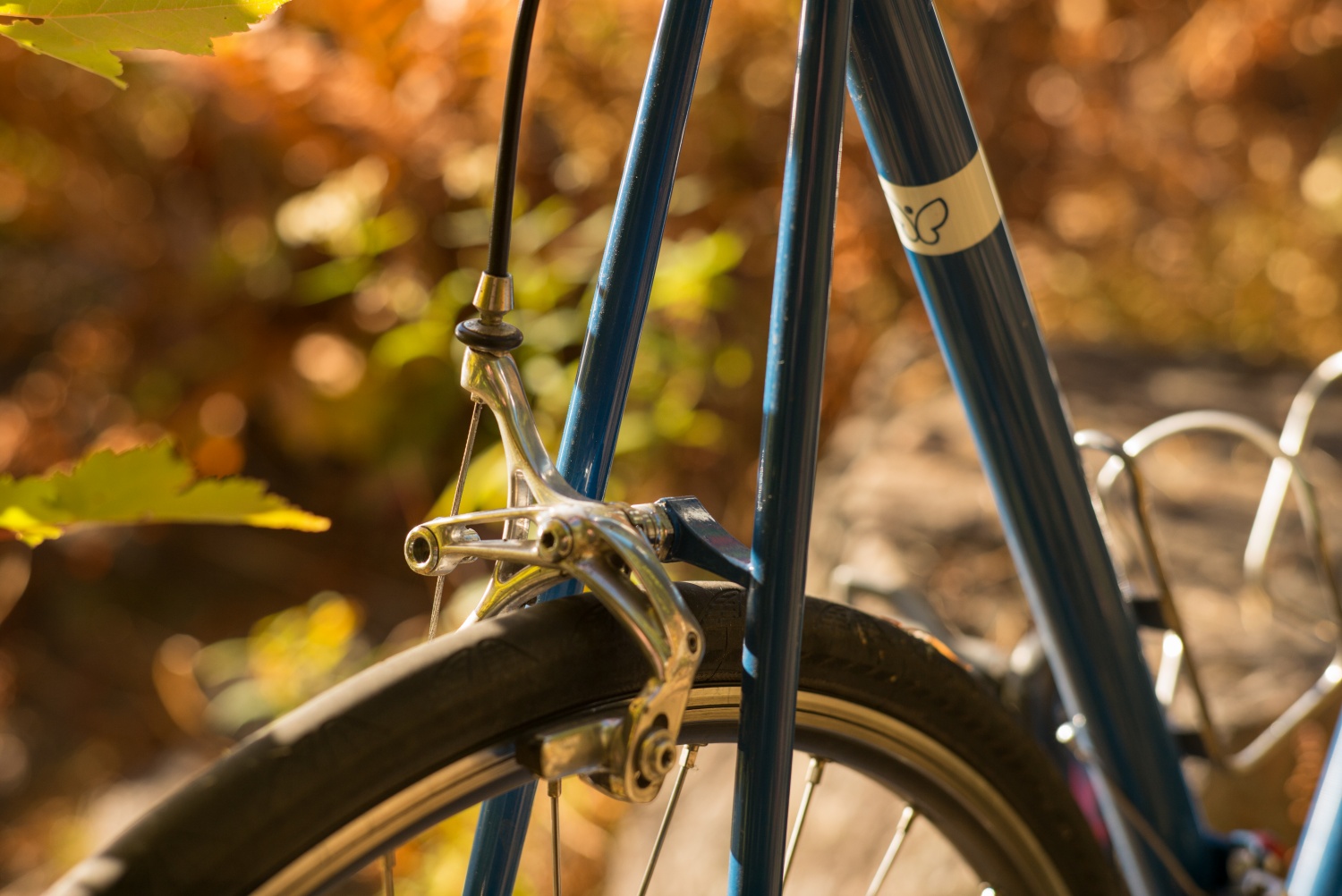 One thought on “The Colourful And Enduring Life Of A Bicycle”