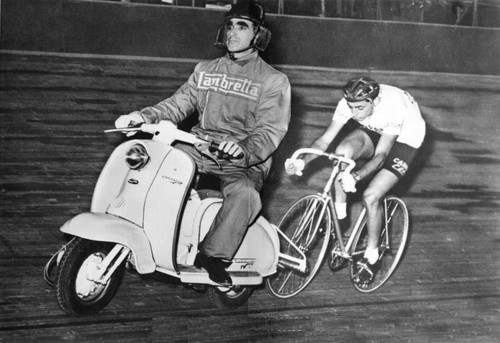 A cyclist, especially a racing cyclist, is constantly looking for a reprieve from the wind, to save energy, to gain an advantage, and to move faster. The wind is often our nemesis. We battle it. Sheltered from wind, we find our wings. In the belly of a flying peloton we pedal freely while eating up kilometers; tight in the slipstream of a motorcycle or car, we can easily double our speed. Not only do the riders and vehicles increase our speed, but they also become a carrot, drawing us beyond our perceived limits.

The discipline of motorpacing is over a century old. It has been a part of cycling since the late 1800s, when motorcycle paced races were popular on both the velodrome and the road. Before motorcycles were used, tandems of up to five riders paced cyclists to go farther and faster than the individual could alone.

Each rider teamed up with a pacer who could push up his speed. The motos roared around the track, often without mufflers and with flames flaring from the exhaust. The races, called Demi-fond, covered 100-kilometer races, and the riders completed in just over an hour. The cyclists, who are known as stayers, tucked themselves tightly behind the pacers on specially designed bikes made to handle the g-forces of the track bankings and to get them as close as possible to the rear of the motorcycle. Motorcycles were designed to push the limits of speed on the steeply banked tracks, and to keep the rider sheltered and tucked in close behind.

It was a dangerous discipline. At high speed, a blown tire or broken bike often proved fatal. In the early 1900s, racers reached speeds of 90 km/h, and by the 1920s, they were doing over 120 km/h. In their incessant pursuit of speed, records, money and fame, many died when they came crashing down on the track, or went flying up and over the banking into the grandstand of spectators. At the turn of the century, stayers were some of the highest paid athletes in North America and Europe. Track grandstands were filled with tens of thousands of people and the riders were household names. Even though it isn’t as popular as it once was, motorpace racing still exists and motorbikes are used to train and fine-tune cyclists’ fitness for the regular road, cyclocross, and track season. To this day, lower-powered derny machines, 90cc motorcycles that are specially designed to pace riders, are used on the steeply banked tracks during the European six-day races.

In the slipstream of a motorcycle or car, a cyclist can find the speed and rhythm that will simulate a race. From Merckx to Wiggo, and even Coppi, Tour champions have been paced to train for the races. Wiggo knew the power he would be required to match in both the time trials and on the climbs to win the Tour. The pacer, his coach Shane Sutton, could read Wiggo’s power output on a handlebar mounted SRM, so he could set a pace in training that would mimic a race-winning effort.

A motorpaced power graph looks similar to one from a race. In the span of seconds, there are sporadic spikes and troughs in power readings, whereas a file from an un-paced ride has distinct plateaus with little variance in power. Comparing the graphs, you can see why motor pacing prepares a cyclist so well for a race.

In the shelter of the moto and pacer, we can speed through the countryside for hours, flying over hills, and sprinting out of corners. The sensation is unlike any other: The driver looks in his mirror, twisting the throttle ever so slightly to stretch us to the point where a grimace of pain appears on our face.

An experienced pacer will know for how long to hold it and when to back off. He is often a cyclist himself, who knows how to gauge the roads, the corners, the speed, and the rhythm of the ride. He drives the motorbike as if he is pedaling in a racing peloton. In a fight to stay as close as possible to the motorbike, the cyclist will occasionally touch the rear fender in a moment of inattention, striping it with black tire marks. The slipstream, at times, feels like a lifeline: In it we fly, but the minute we are out in the wind, we flounder.

A look from behind the motor…

Consult with professional and Olympic cyclists, Dede and Michael Barry on training. For inquiries, contact us at [email protected]