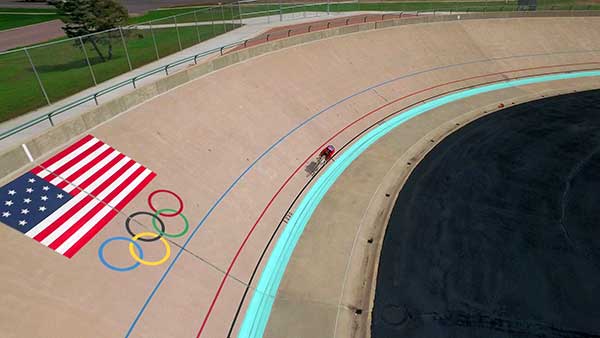 We are excited to announce that The Equalizer will have its broadcast premiere on The Nature of Things with David Suzuki Thursday, March 3 at 8 p.m. (8:30 NT) on CBC TV. Mariposa Bicycles provided the bike used in the 3 Kilometer Pursuit by Sarah Hammer. Watch the trailer.

“In a sport where technology is a big factor, World champion track cyclist Sarah Hammer rides at the US Olympic Training Center in Colorado Springs. Sarah holds the current world record in the 3000 metre individual pursuit. Her training and bike are state of the art, and her skin-tight suit defeats air resistance. Sarah is challenged to compete on a level playing field against 1960s British track legend Beryl Burton. Mike Barry Sr., Mariposa bicycles founder, who once competed against Beryl builds a replica of her 1960s era bike. Compared to her new stiff carbon fiber bike, Sarah finds the steel vintage one a pleasure to ride but much less responsive. Racing against a virtual avatar of Beryl Burton, Sarah Hammer gets off to a fast start but (based on statistics) Beryl Burton slowly catches up. Who wins?”

From the CBC website. For more on The Equalizer and to view the documentary, please visit Kensington TV